2018 was an incredible year for horror. Whether you’re into the surreal art-house stylings of Suspiria (2018) or Hereditary (2018), the silent intensity of A Quiet Place (2018), or the rejuvenation of a classic boogieman with Halloween (2018), horror reigned supreme at last year’s box office. Thanks to the inherent secrecy surrounding J.J Abrams projects, when Overlord was first announced there was speculation formed part of the Cloverfield franchise, as we only knew it would be a supernatural thriller set during World War II.

Between directing blockbusters like Star Trek (2009) and Star Wars: The Force Awakens (2015), J.J Abrams has spent the last several years producing lower-budgeted movies through his production company Bad Robot. Originally beginning with Cloverfield (2008), Abrams has helped give a platform to new and upcoming filmmakers. And with the exception of The Cloverfield Paradox (2018), the majority of them have resulted in entertaining movies. 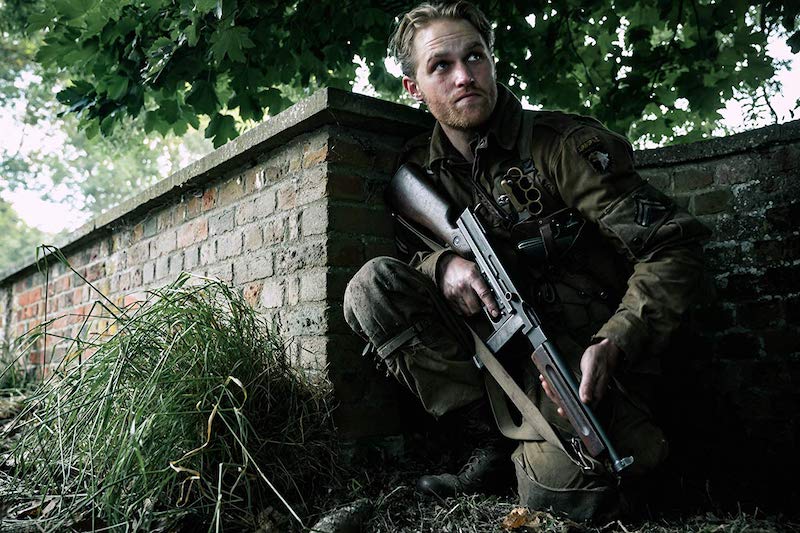 Overlord continues Bad Robot’s ethos in much the same vein. This is Australian director Julius Avery’s second outing as a director, following Son of a Gun (2014), and with a decent budget of $35M behind him. With the help of Mark L. Smith (The Revenant), Overlord is the brainchild of J.J Abrams and co-writer Billy Ray (Volcano), telling a simple story that builds anticipation and mystery.

On the eve of D-Day, a plane of US soldiers are preparing to go behind enemy lines in France, ordered to infiltrate the Nazi’s communication system. After they’re shot down, four survivors—rookie Boyce (Jovan Adepo), sniper Tibbet (John Magaro), photographer Chase (Iain De Caestecker), and explosives expert Ford (Wyatt Russell), are forced to improvise how to take down a radio tower atop of an old church. But after Royce manages to sneak into the Nazi compound, he discovers the Germans are conducting bizarre experiments that include bringing dead soldiers back to life for “a thousand-year Reich”. 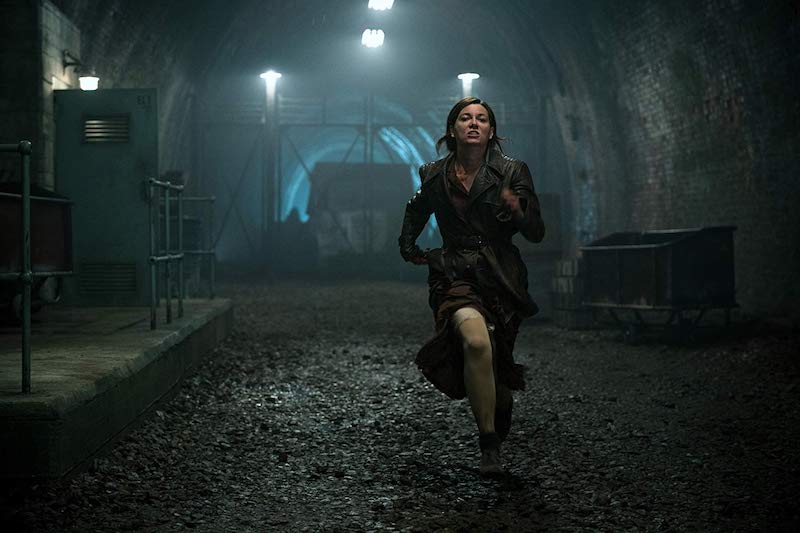 As our lead, Adepo’s (Fences) performance is as impressive as the body count; optimistic and principled, Boyce is instantly relatable and it’s easy to become attached to his character. He’s the film’s heart and conscience. Mocked for not being able to even kill a mouse, Boyce’s kindness is a stark contrast to the chaotic war and cutthroat attitudes that surround him.

But while Adepo’s good, the most impressive performance comes from Wyatt Russell (22 Jump Street) as Ford, who again proves he’s a fine actor first and the son of Hollywood legend Kurt Russell second. That said, Russell undoubtedly opts to mimic the world-weariness his father brought to The Thing (1982) and Escape From New York (1981). Ford is the stereotypical tough guy, but over time we see more of his humanity and the performance is handled very well.

One of the most entertaining characters is Pilou Asbæk (Ghost in the Shell) as SS Hauptsturmführer Wafner. The Game of Thrones star plays his part with equal menace and glee, and one can’t help but be reminded of Christoph Waltz from Inglourious Basterds (2008). Delightfully evil, Wafner is a one-dimensional villain nobody even attempts to humanise.

Mathilde Olivier also impresses as French villager Chloe, the only named female character, and she’s given plenty of fun moments—the best involving a flamethrower that harkens back to Aliens (1986). Although she’s subjected to two attempted sexual assaults, I appreciated how the writers gave Chloe her own subplot and she wasn’t just a token love interest. Seeing that she’s able to take care of herself, even after the cruelty she’s endured, lends her character a  much-needed sense of empowerment. 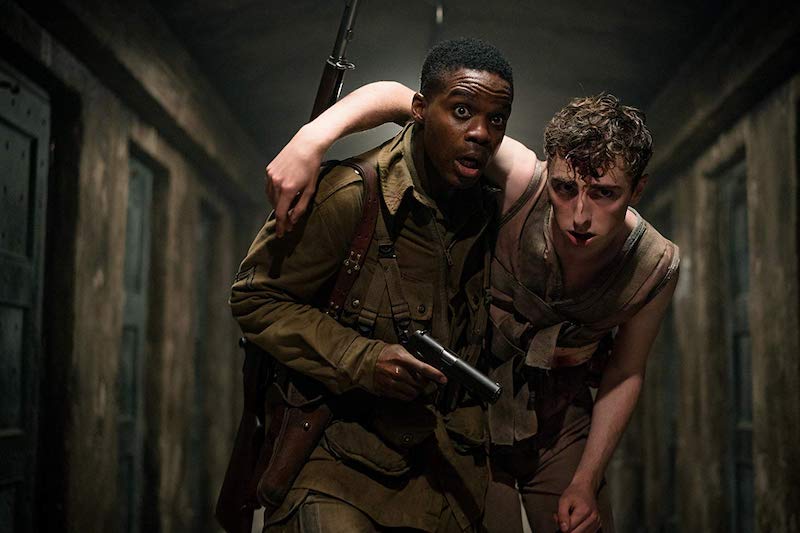 Between the wartime narrative and discovery of monsters, Overlord delivers two movies for the price. The opening sequence is a spectacular set-piece guaranteed to get your pulse racing, and it’s here Avery establishes himself as a gifted director to keep an eye on. An opening scene hasn’t gripped me as much since Saving Private Ryan (1998), which Overlord can’t help but evoke at times. It will make audiences feel they’re being thrown into chaotic battle themselves.

The first half plays out like a standard WWII drama, drawing on a number of classic war films. Even the studio logos are presented with a sepia tone to match lettering popular during Hollywood’s Golden Age. Overlord plays with its standard war movie premise, with soldiers doing the impossible in order to complete a mission and save the day. Like Hamburger Hill (1987), the group is made up of archetypes like the loudmouth joker (Tibbet) and the shy photographer (Chase). The story resembles a Band of Brothers (2001) episode at times, particularly when the squad meet and befriend Chloe and are taken into her home.

However, the second half takes a drastic turn and starts to resemble video games like Wolfenstein and Resident Evil. There are all sorts of zombie creatures lurking around every corner, as Avery successfully transitions from old Hollywood war movie to 1970s grindhouse splatterfest, like a hybrid of Fury (2014) and Re-Animator (1985).

As with Quentin Tarantino’s Inglourious Basterds, Overlord is a fictionalised account of WWII and the action becomes incredibly bloody and violent. The sheer amount of gore might be off-putting for some, but it’s integrated into the story well, serving a real purpose rather than added for shock value. What’s most impressive is that Overlord uses a lot of old-fashioned practical effects and subtle CGI instead of an overbearing amount of digital VFX work. 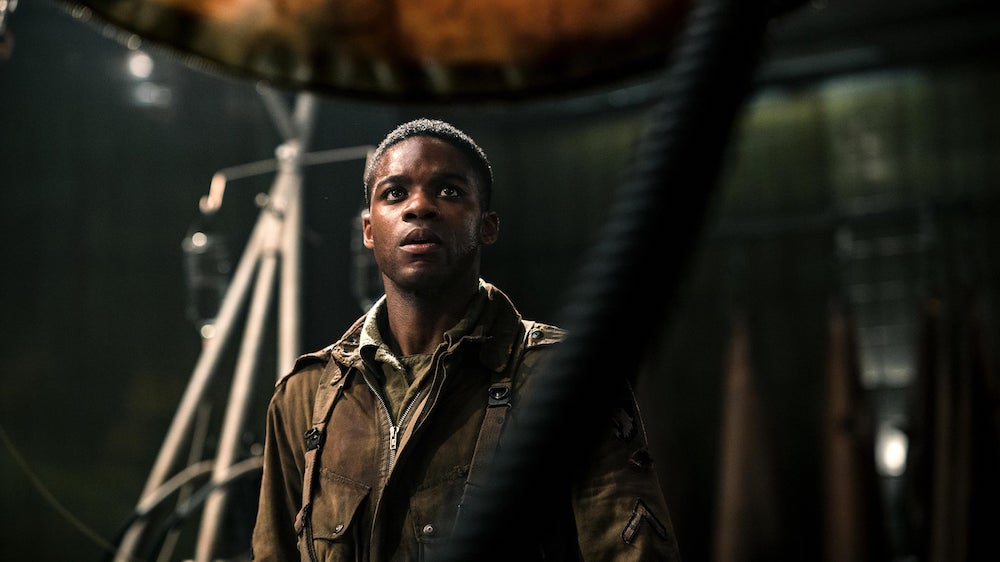 Avery strikes the perfect balance between a respectful exploration of soldiers in a war zone and an exploitive B Movie without ever feeling like he’s manipulating the audience. This is helped by a wonderful score by Jed Kurzel that pushes the audience from setting to setting with natural transitions. The direction from Avery also establishes a palpable of dread, from the dizzying effects of Boyce’s parachute fall to the haunting image of dead soldiers hanging from trees in silhouette. Using clever camera angles, Avery manages to amplify the unnerving atmosphere, and his immersive directorial style creates genuine claustrophobia.

Altogether, Overlord’s direction, story, and its performances come together to make an incredibly entertaining movie that knows what it wants to be: a B Movie zombie horror film set during WWII. The characters may be cliches and the story is often predictable, but none of that stops Avery from creating a rich atmosphere and telling an entertaining story with some bloodcurdling action. 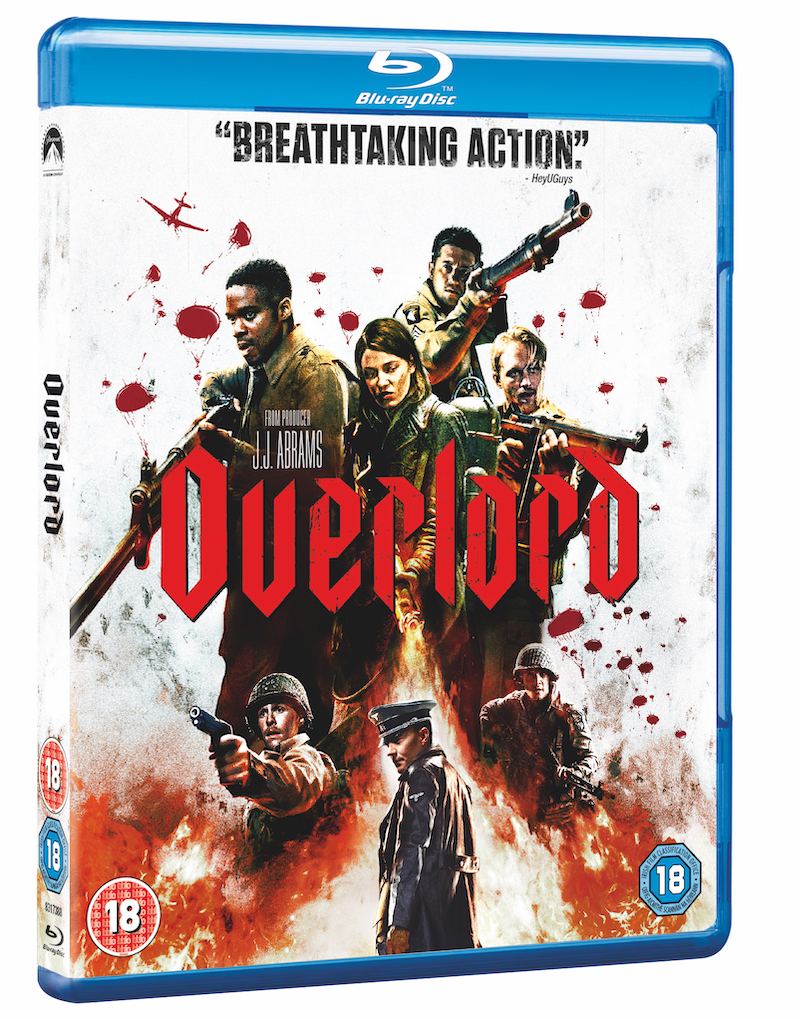 The 1080p/AVC encoded image is most impressive and boasts outstanding contrast. Dark midnight shadows penetrate deep into the screen, providing the image with a lovely cinematic feel. Visibility is extraordinary, allowing viewers to make out the smallest of features. Obviously, the highlight is the visibility of wounds and gore that reveal an incredible amount of stomach-churning detail. Textures are consistently strong with the fabrics of the well-worn uniforms, stone buildings, rubble, Nazi laboratory equipment, mutated body parts, and grimy surfaces. The incredible use of lighting helps drive the story’s moody offset gleams of light that illuminates dark environments, traditional in J.J Abrams productions like Super 8 (2008).

Overlord’s Dolby Atmos soundtrack is incredible. Every action scene is a total delight, from the opening sequence in the plane (with the hum of the engine and the rattling interiors, before bullets tear through the fuselage, leading to explosions and screams). A multitude of wartime sounds can be heard precisely all around the wide soundstage, with every inch perfectly defined that draw the listener into the environment. The music score is also weighty and balanced to complement the dialogue.

There’s only one bonus extra, broken down into six featurettes about the making of the film, each lasting approximately 10-minutes…