Everyone knows this franchise likes to keep audiences on their toes. Cloverfield (2008) was one of the first movies to tap into the world of viral marketing, with early teasers and trailers revealing very little of what the movie was about, which inspired intense speculation it was a new Godzilla movie, or a take on HP Lovecraft’s cosmic entity Cthulu. Of course, it turned out to be neither. The sequel, 10 Cloverfield Lane (2016), only released a trailer weeks before release, and surprised everyone by being a departure from its ‘found footage monster movie’ predecessor.

It seemed the ‘Cloverfield brand’ was setting itself up as a cinematic anthology series, or big-screen Twilight Zone, with the only common threads being a few in-jokes and the presence of a giant monster. And so, during the Super Bowl in the United States, when Netflix announced they’d purchased a new Cloverfield film for worldwide distribution, available to watch immediately after the game… well, the buzz was justifiably high! Sadly, once millions streamed The Cloverfield Paradox and live-tweeted their thoughts, the excitement proved short-lived… 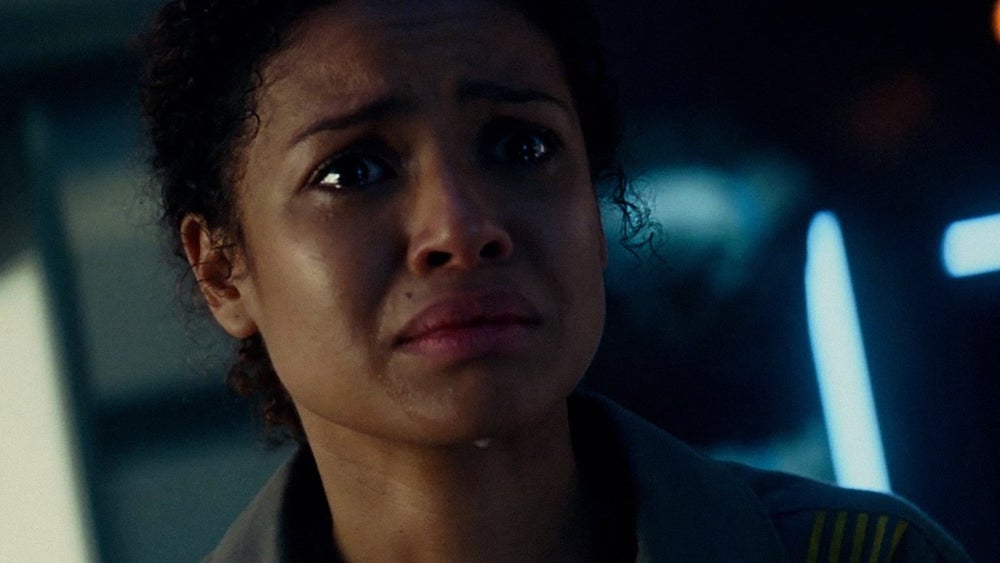 The premise is a further departure from the previous instalments, with a concept that actually has great potential: a team of scientists working aboard a space station are striving to discover a new energy source to alleviate the needs of a rapidly depleting Earth. During the course of their experiments, something goes wrong, and the team look out the window to find that the Earth has vanished. It’s just… gone. It’s a gripping setup, and the existential crisis of such an unthinkable event occurring is fascinating to consider. The Cloverfield Paradox, however, couldn’t give a monkeys about any of that because it’s too busy throwing loads of other shit at the wall, and then stubbornly refusing to wipe any of it off.

The Cloverfield Paradox is, to put it mildly, absolute nonsense. The film feels like it’s been made from a rough first draft by writers Oren Uziel and Doug Jung (Star Trek Beyond), who pitched a mess of ideas that nobody thought to refine. It’s the filmmaking equivalent of emptying the contents of an old fridge into a cauldron and hoping something edible seeps out at the end. Nothing here is remotely at the level one would expect of a major Hollywood production, which is what this is, despite being offloaded by Paramount Pictures to Netflix for $50 million. 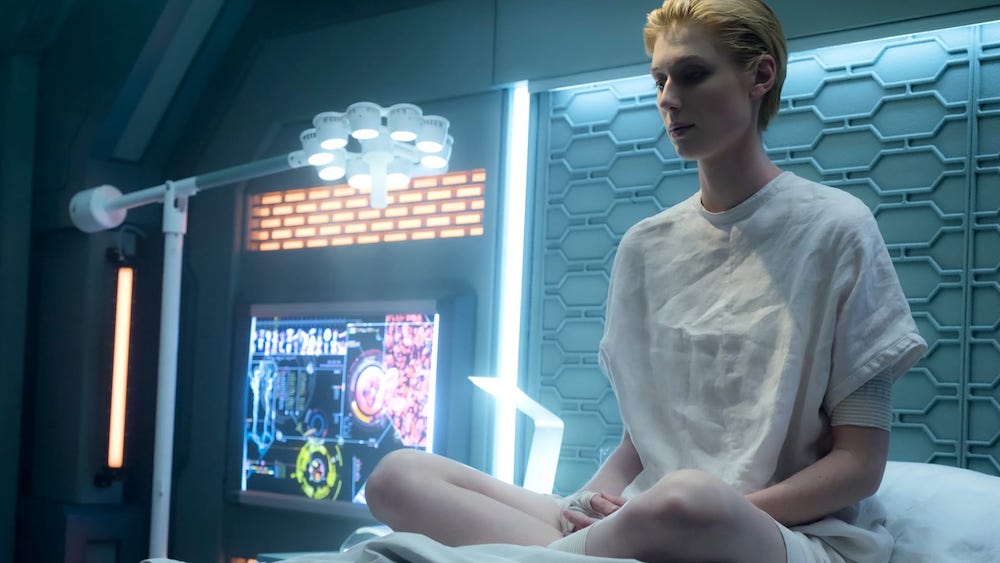 Somewhere amidst this half-baked gibberish, there are a smattering of effective moments. The sets are visually slick, Bear McCreary’s score works well, and the introduction of alternate dimensions that start bending the rules of reality leads to some excellent creepy moments. One character is mysteriously discovered inside the hull of the space station (wires and cabling running through her body), and it’s a ghastly Event Horizon-esque image. But things just get sillier and sillier, leading to Oscar-winner David Oyelowo earnestly delivering lines like: “this dimension is eating us alive!”

The rest of the cast is filled out with a mix of strong actors from around the world, including Aksel Hennie, Daniel Brühl and Zhang Ziyi (speaking in her native Mandarin). Gugu Mbatha-Raw (Black Mirror) is the ostensible heroine, as the only character to get any semblance of a backstory. She has a tragic past that might affect her present, and a boyfriend on Earth she’s trying to find a way back to. Scenes following her lover’s misadventures on Earth are perhaps the weakest element of the film (apparently added after poor test screenings), because watching him text his buddies isn’t good cinema. Worst of all, these scenes telegraph a final reel twist-reveal, which seems a baffling creative choice. You can’t help but wonder what the filmmakers were thinking. 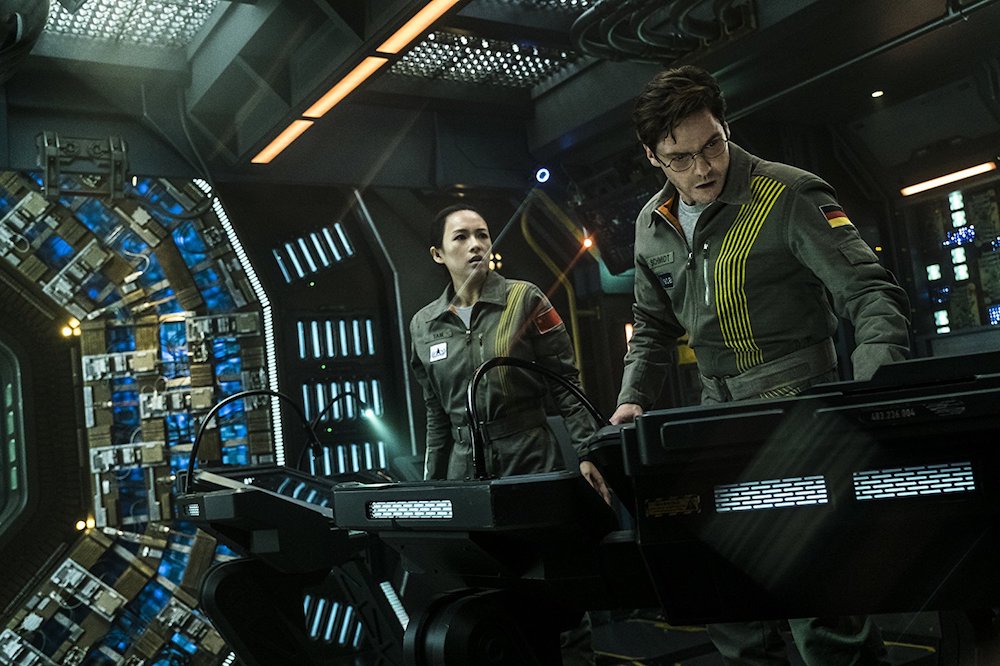 The real star of the show – and thankfully there is one – is Chris O’Dowd (Bridesmaids), who seems to be the only person involved to grasp the appropriate tone for sci-fi bunkum like this. His dry, laconic asides suggest he’s fully aware that The Cloverfield Paradox should be a comedy. After all, it does feature an inexplicably sentient severed arm providing plot direction, so safe to say it’s pretty laughable at times. And that’s the thing with The Cloverfield Paradox: it’s so alarmingly stupid that at times it almost circles back around to becoming fun.

Despite the potentially epic plot, nothing that happening carries any weight (not even the Earth vanishing, or the various deaths), which turns the film into a sequence of weird, seemingly unrelated things just happening for an hour and a half. Compared to the recent space station horror movie Life (2017), it pales in comparison, and it doesn’t deserve to be mentioned in the same breath as 10 Cloverfield Lane. And yet, almost for those reasons, The Cloverfield Paradox feels destined to become a naff cult favourite.

This is a hokey mess of a movie, though, and no mistake. Director Julius Onah and everyone involved needs to take a long, hard, introspective stare into the middle distance. If comparing it to other Cloverfield’s, it’s the clear runt of the litter, but invite some friends over for a pizza and beer with a healthy dose of sarcasm and… well, your mileage still may vary. With the talent assembled, this can’t help feeling like a botched opportunity. Maybe the good version got left in another dimension…