It isn’t a stretch to say that Saving Private Ryan is a beloved war movie. When it was first released, its searing portrayal of World War II combat didn’t repel audiences; instead, it grossed over $480M worldwide, earning praise from both critics and moviegoers. For 19 years, it was the highest-grossing WWI movie ever made, until Christopher Nolan’s Dunkirk (2017) toppled it last year.

Released in 1998, Saving Private Ryan combined the appeal of post-Forrest Gump Tom Hanks with Steve Spielberg’s ongoing WWII obsession. After all, it wasn’t the director’s first movie set in that period, following on from 1941 (1979), Empire of the Sun (1987), and Schindler’s List (1994). And it paid off, winning five Academy Awards, including Best Director, although it missed out on Best Actor to Roberto Benigni for Life Is Beautiful, and, more controversially, Best Picture to Shakespeare in Love. It was actually one of very few times the Best Director winner didn’t also take home the Best Picture statuette. 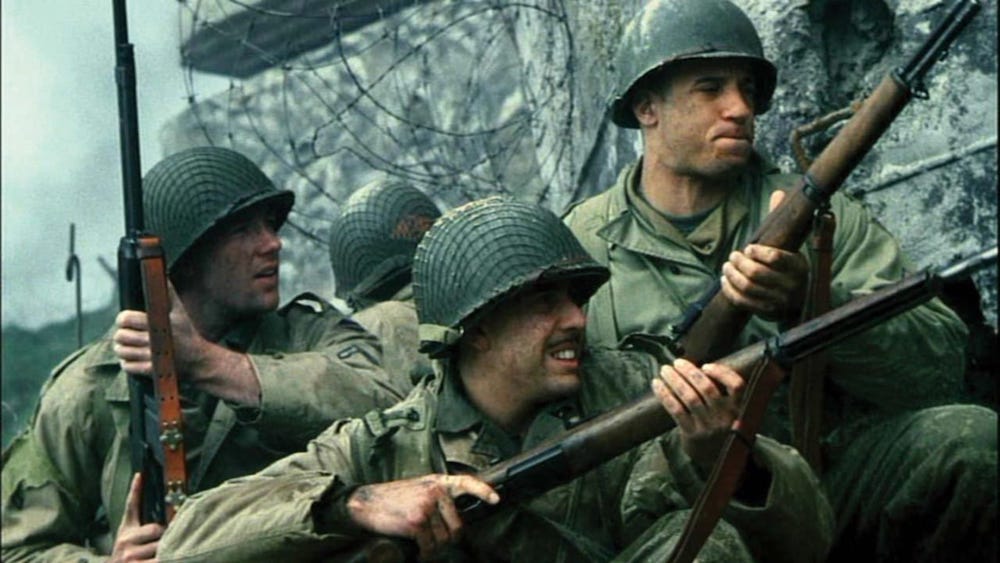 On its 20th anniversary, we look back at the famous film, and it’s… actually less impressive on the small-screen today. This is a common issue with films that rely so heavily on spectacle and action. When you’re not encased in darkness and a relatively distraction-free cinema, the emotions tend to land more lightly. If I’d seen Saving Private Ryan in a cinema again my experience might be different, but considering most people will now always see it at home, I think it’s safe to say that this movie will always suffer. Unless you can perhaps afford a top-end home theatre system with 4K projector, 100″ screen, and Dolby Atmos sound.

It’s tough not to notice the overwhelming American jingoism in this movie, especially now we have Dunkirk providing an English counterpart. Saving Private Ryan starts and ends with an image of the US flag, and has been criticised for ignoring the efforts of other countries in its portrayal of the Normandy beach landings. 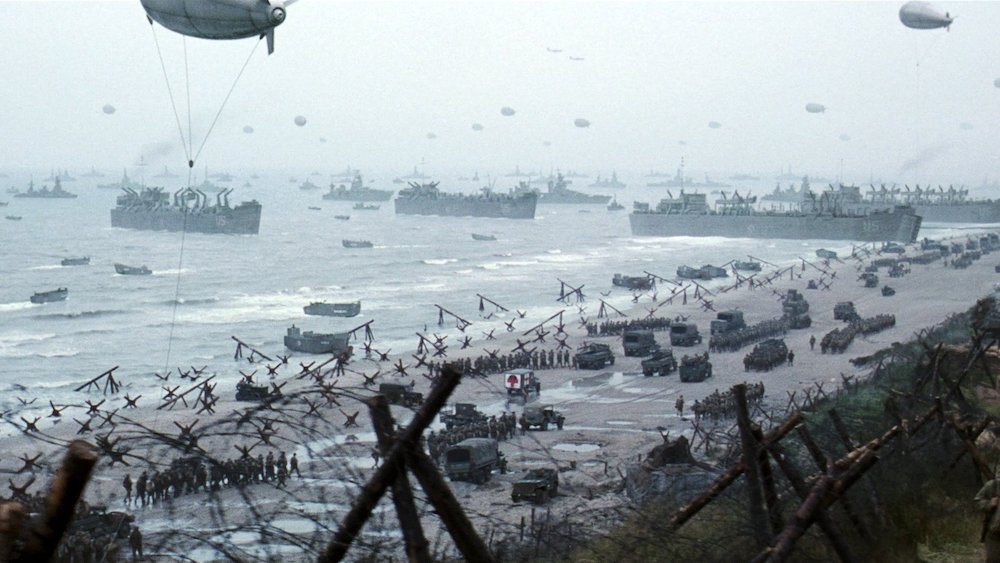 The cinematography still stands out. In fact, the movie’s desaturated colour works even better decades later, with Janusz Kamiński’s photography making the film resemble an authentic wartime documentary. The aesthetic has aged spectacularly well, because it was always meant to look old.

As the story opens with the famous 27-minute long Omaha beach landing, you’re dropped into an action set-piece that still lands its punches. Your eyes frantically peer through the camera’s POV, scanning for a way out of the frightening destruction happening all around. It’s messy and makes for tough viewing. When the sound cuts out and Captain John Miller (Hanks) struggles to regain his composure in slow-motion, shell-shocked, you can’t barely stop yourself from yelling at him to take cover. 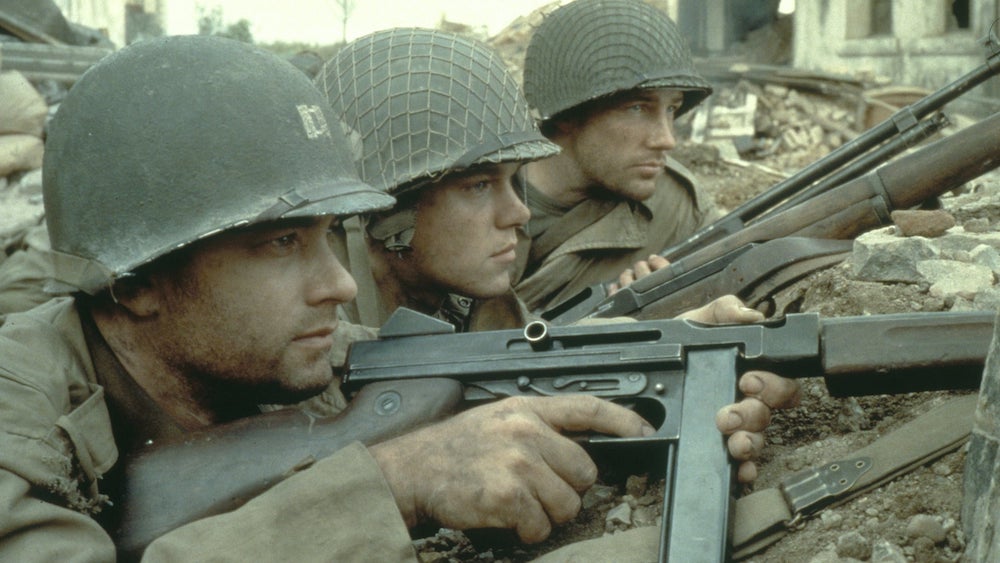 From there, the horrors of war continue, as we see medics prioritising which soldiers need medical attention the most, soldiers stripping valuable ammo off their dying comrades, and men praying to various deities as they die. And all of that happens within the first half-hour. When the US troops start having some success, killing Nazis with startling cruelty and efficiency, you can’t help but feel like the enemy deserves it. That’s what war does to you, and Spielberg isn’t going to sugar-coat it for you. FUBAR, for sure.

When we suddenly move to an office scene, it feels distinctly odd, as if we’re awakening from a nightmare. And hence why the proposed mission to rescue one single soldier seems like the worst use of resources. The idea of potentially sacrificing so many for the sake of one continues to rub us the wrong way, with multiple characters speaking out about the futility of this plan. And that becomes the central dichotomy at the heart of Saving Private Ryan. It’s sad that it might’ve worked too well, because by the end we’re so disillusioned with the idea of the lone hero, that each member’s death ends up affecting us less and less. 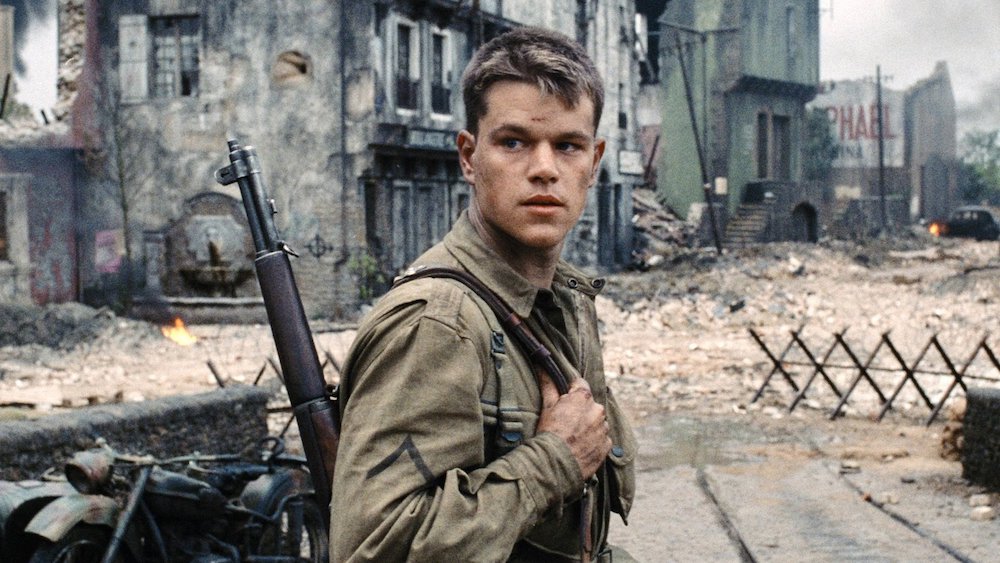 It is odd to realise that the death that hits us the hardest is the first of the eight-man squad, when Prvt. Caparzo (Vin Diesel) gives up his life trying to save a little girl. Then, as the group of seven count dog tags, and we see medic Wade (Giovanni Ribisi) give up his life, our hearts slowly turn to ice. It’s sad because by the time Capt. Miller sacrifices himself in his final scene, only to find out that it was for nothing (the fighter jet saving them would have done so, regardless of whether he had continued firing at the tank), we just don’t care anymore. We just want this terrible war to end, and we want it to end with awards and celebration.

But… it doesn’t. Just as other critics have mentioned, Saving Private Ryan starts strong and ends weak. The sacrifice of the hero ends up being for naught. Maybe that’s the point of war, but considering the team took other creative liberties with the story it was based on, it seems half-assed. 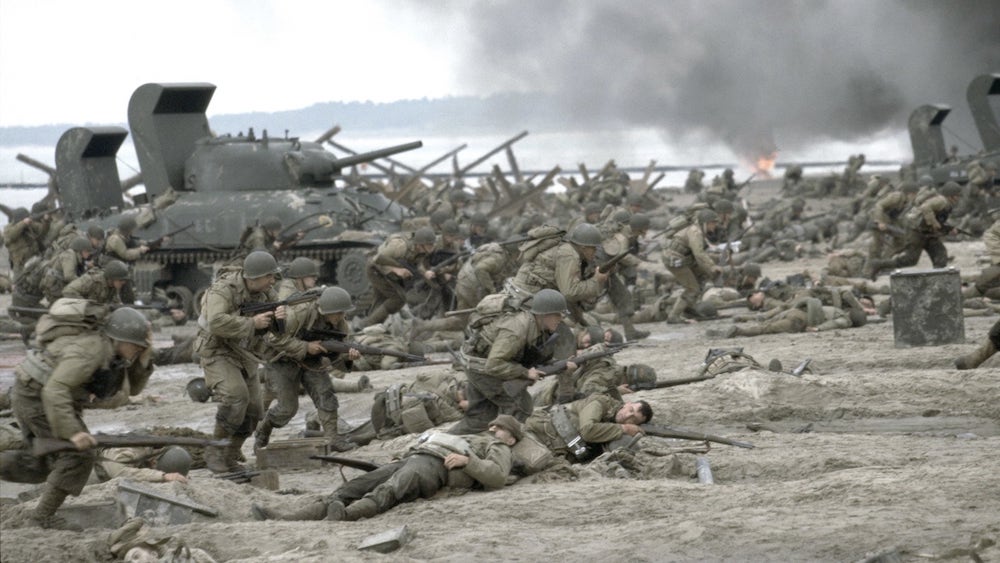 Luckily, the production hits a home run with its ensemble of actors: Tom Hanks, Tom Sizemore, Edward Burns, Vin Diesel, Giovanni Ribisi, Jeremy Davies, and Matt Damon all act their socks off. They were undoubtedly helped by the famous 10-day boot camp before filming began. The acting’s perfectly calibrated, with no one person stealing screen time, even during death scenes.

When you see Jeremy Davies’ portrayal of the most cowardly soldier, only to redeem himself with a single gunshot, it makes you wonder what the actor could’ve done with many other ‘conflicted hero’ roles. And then there are the pleasant surprises like Ted Danson, Nathan Fillion, and Bryan Cranston, whom I mostly forgot were in this movie. All great actors who were, or became, famous through television.

A viewing of Saving Private Ryan has been known to severely affect war veterans due to its harrowing realism of events, so I’m going to leave it here: even with its shortcomings and weak ending, this movie has the honour of producing one of the most iconic war sequences in movie history. The fact that it continues to affect audiences to this day, even inspiring directors like Quentin Tarantino with Inglourious Basterds (2009), underscores it enduring impact. Even in this day and age of over-stimulation and anything-goes digital overload.