The London Film Festival saved one of its best cards until last, screening the hugely anticipated Free Fire on closing night. Officially not released until next spring, exactly one year after the vivid, thought-provoking mess that was High-Rise, Ben Wheatley’s latest is an extravagantly piercing cinematic feast of crass humour, bullets, and blood. We’re far from the metaphorical concepts, moral complexities, and the relevance to modern society that set many of Wheatley’s previous works apart. Instead, Free Fire will remind you more of a Tarantino movie, with less self-satisfied dialogue but just about the same levels of gratuitous swearing and thrilling, graphic, impeccably-styled physical violence.

The story is set in Boston, Massachusetts, in the late-1970s. A handful of IRA soldiers meet with a group of gun traffickers in a disused harbour facility, to close a weapons deal. The Irish buyers are led by Chris (Cillian Murphy) and Frank (Michael Smiley), with Justine (Brie Larson) as their American facilitator, and Stevo (Sam Riley) and Bernie (Enzo Cilenti) as hired muscle. The sellers are South African gun dealer Vernon (Sharlto Copley) and their facilitator Ord (Armie Hammer), joined by Martin (Babou Ceesay), Gordon (Noah Taylor), and Harry (Jack Renoir). It only takes a few minutes for Wheatley to put them together in the same place (“Fuck the small talk, let’s buy some guns”, asks Chris, eager to skip official introductions and get it all done). Inevitably, though, there are a few wrinkles. First, the guns are not as requested; then there’s a quarrel between Stevo and Harry about an unspeakable thing one did to the other’s cousin. In an abandoned warehouse, during an illegal weapon sale, where all participants are “packing heat”, there’s only one way said wrinkles can be ironed. 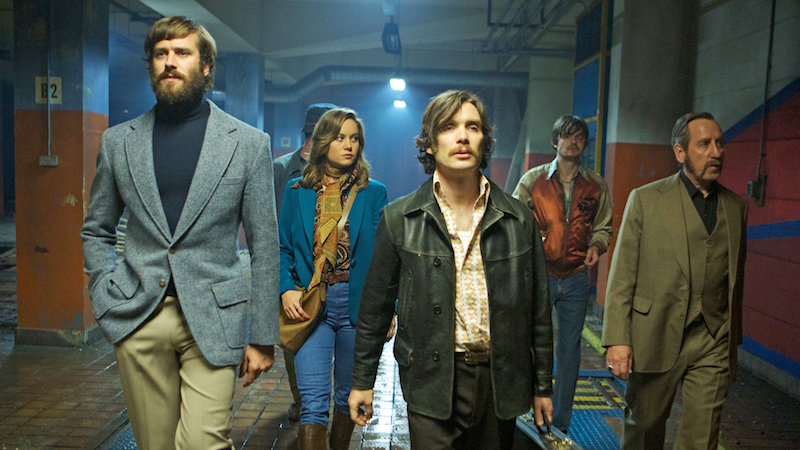 For a film that consists of a brief character introduction followed by an hour-long shootout, Wheatley does a great job keeping tensions high, the dialogue sharp, and the visuals effective. There’s no need for 3D as the bullets whizzing around to make you feel close to the action, and when they pierce clothes or limbs, they do so with realistic and agonising consequences. When the characters fall on the ground, they literally bite the dust, as you can almost taste the blood in their mouths, or feel the chalk spray their faces after bursting out of a wall struck by a bullet. It’s twistedly funny to see the characters become incapacitated one by one, while shouting insults and taunting each other, crawling on the floor, trying to buy time to flank the enemy or pick up a suitcase of money.

Unavoidably, you might feel the film drags here and there, especially in the middle, where it becomes clear there won’t be any further development to the story. It starts and ends in the warehouse. The only questions are: who will make it out alive, and what will happen to those who won’t? What makes the film work so well is not only the competent direction, but the irresistible performances. The gun dealers are by far the funniest of the bunch, thanks largely to Sharlto Copley’s accent, Armie Hammer’s charm, and the character’s stupidity, but also because they’re given the best lines. But it’s also impossible not to laugh at the risible business-like aplomb of Murphy and Smiley (especially), or the flat-out incompetence of Riley and Cilenti’s characters; only Larsson seems far from her best, in a role that could hardly make her shine. Still, once they’re all in the same room, the ensemble is spot on.

Free Fire may sometimes feel over-the-top, even cartoonish in its pursuit of violence. The soundtrack, used sparsely but effectively, is in line with the odd vibe permeating the film and winks at the ‘70s with fun irony—thanks to songs by CCR and John Denver. Viewers with little patience for postmodernist irreverence of ‘action for action’s sake’ should be aware that there’s very little redemption at the end. But if you’re ready to embrace the colourful, ruthless, joyous bloodbath on display, then grab your popcorn and dive right in.