Horror and comedy are close bedfellows, as both rely on setups and “punchlines” to weave their magic in the minds of audiences, but they lose their power if you experience them second-hand. A comedian telling a joke you’ve heard already won’t get the intended reaction, and this truism holds for scary films. If you haven’t seen Hereditary (especially if you don’t even know what it’s about), feel free to skip this review and watch it now. I can’t bring myself to write about what happens in too much depth, for fear of spoiling someone’s optimum experience, but for those willing to accept some element of risk, I’ll do my best to elucidate without spoiling…

“Hereditary” is an intriguing title; a word meaning “a title, office, or right conferred by or based on inheritance”. I spent the early portion of this movie trying to outsmart the story, by predicting where it might go, based on the title and genre’s traditions, but it managed to outmanoeuvre me on more than one occasion. And even when it leans into more familiar horror territory (séance, possession) there’s always something unpredictable and disturbing going on that elevates the material. 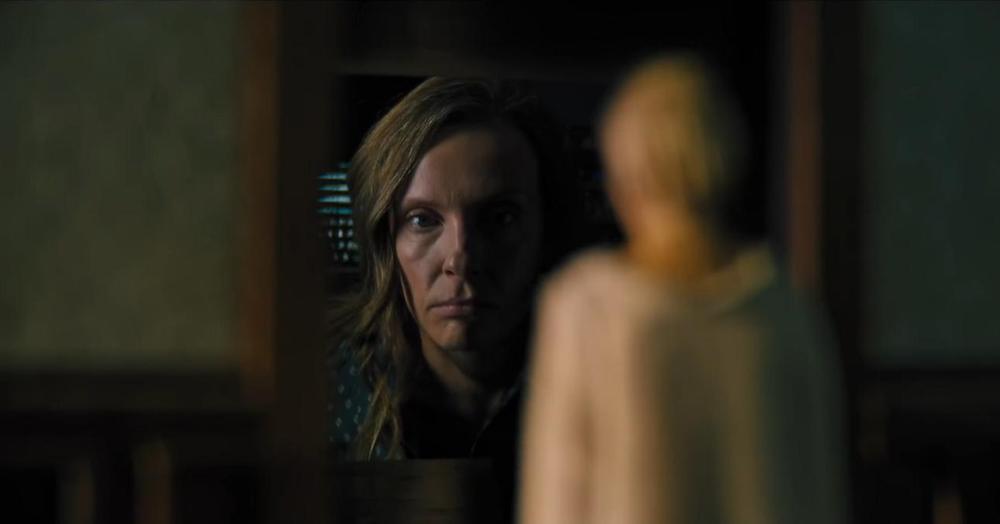 Following the funeral of her secretive mother, whom she never got along with growing up, artist Annie (Toni Collette), her husband Steve (Gabriel Byrne), and their teenage children Peter (Alex Wolff) and Charlie (Milly Shapiro) try to move on with their lives. But it’s not long before a ghost of Annie’s mother has been seen the workshop she uses to build miniature autobiographical dioramas of her life, and Steve receives shocking news his mother-in-law’s grave has been desecrated. As a pall of creepiness falls over everything, one settles in for an efficient but familiar story about a family being haunted by a dead relative… but an unexpected road accident and a brutally realistic portrayal of cowardice upend expectations, pushing Hereditary down a more ambitious and unpredictable path.

Ari Aster, making his feature-length debut after making shorts like The Strange Thing About the Johnsons (2011), directs Hereditary like it’s two stories combined: a tense and agonising study of a family struggling with grief but coming apart at the seams, and an occult mystery where mysterious forces are manipulating an innocent family to their own twisted ends. The balance is expertly handled, in what Aster describes as “a tragedy that curdles into a nightmare”, particularly because no one side of the story overshadows the other.

Toni Collette (The Sixth Sense) is frankly marvellous as Annie, a mother and erstwhile daughter, dealt a double-whammy of cruel blows that leaves her crippled with anxiety, sorrow, self-loathing, and a growing hatred of her own son. Gabriel Byrne lends steady support as her quiet and dependable husband, doing his best to be everyone’s rock, and his casting works nicely in terms of sidestepping genre expectations (Bryne once played the Devil in End of Days, of course). Alex Wolff (the boy from Jumanji: Welcome to the Jungle) and Milly Shapiro (one of the girls who originated Matilda on Broadway) are also excellent; the latter making a terrific movie debut with very little dialogue, and the former brilliantly portraying a teenager going slowly insane with guilt. The story also taps into the potent horror of seeing your own mother go mad and start hating you, perhaps even subconsciously wanting to kill you, so Peter evoked Shelley Duvall in The Shining (1980) at times.

I hate to dance around revealing precisely what Hereditary is about, or what the Graham family are facing together, but suffice to say there are Conjuring-esque moments of weirdness without relying on cheap thrills and jump-scares. There’s also a wonderfully thickening atmosphere to the movie (helped by a soundscape from Arcade Fire collaborator Colin Stetson) that pulses with low-level bass in most scenes. The music really draws you in, making you invest in seeing this family get through their ghastly ordeal. 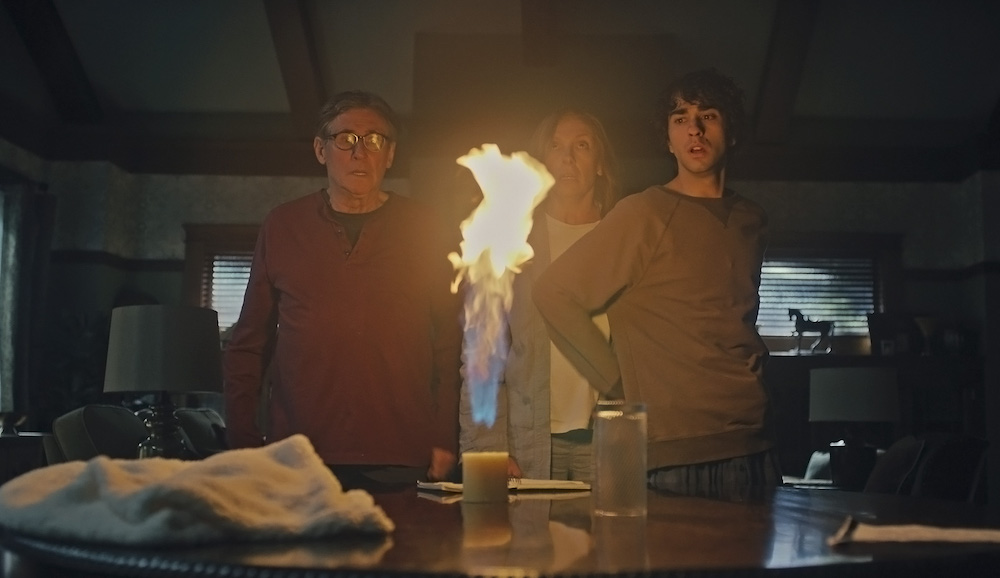 Even when the movie does bow to horror movie conventions, somewhat, as the story gradually involves sleepwalking, séance, witchcraft, and child possession, Hereditary does enough to ensure things stay feeling fresh. The script by Aster himself does a great job disguising where things have headed, so while the destination isn’t something totally new we haven’t seen before… the way we got there has been so absorbing, unsettling, and frightening.

The horror genre’s been in top form of late, as talented new filmmakers are being smallish budgets (this cost $10M) to develop their own visions, and all the studio care about is the end result being a commercial way to draw audiences to cinemas and spook them. Hereditary is a terrific modern-day equivalent to Rosemary’s Baby (1968) with a dash of Ordinary People (1980), mixed with the unsettling tone of Don’t Look Now (1973), plus a few jolts straight out of The Conjuring (2013) or The Witch (2015). There’s even a domestic sense of weirdness that takes the best from J Horror via Tim Burton. Even the current political situation with President Trump is lightly touched upon, one might say, in terms of what the ending symbolises for those responsible for “conjuring” such a diabolical thing.

Hereditary has been exalted by almost everyone (it has a rare 100% Fresh rating on Rotten Tomatoes), and it’s unquestionably worth your time if you enjoy supernatural horror. Toni Collette gives a career-best performance and Ari Aster announces himself as a talented director who can freshen up some hoary cliches, even if the third act slightly fumbles matters by providing clear-cut answers to what maybe should have been kept ambiguous. Still, it’s definitely a movie to watch twice, then notice all the clues and foreshadowing one might have overlooked the first time. 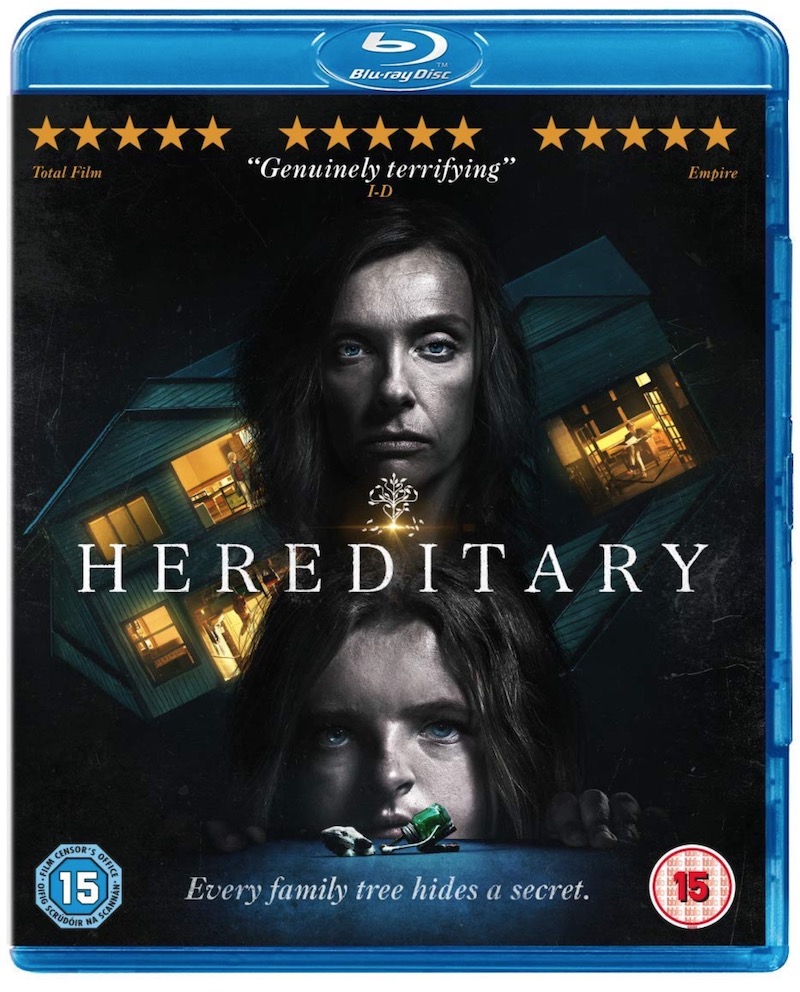 The Blu-ray of Hereditary is presented in (a very unusual) 2.00:1 ratio in a 1080p AVC MPEG-4 encode, working from a digitally shot movie finished with a 2K DI. It’s a great transfer that handles the stylish colour palette nicely, with good details in close-ups, although I’m now spoiled by HDR on 4K Ultra HD discs so missed the inkier blacks and brighter highlights that format can deliver. There were one or two moments when I noticed banding in the image, or when the far edges of the frame looked a bit murky. Annoyingly, there is a 4K UHD version of this movie available in the world, just not here in the UK.

The DTS-HD Master Audio 5.1 soundtrack is generally good, although nothing to get hugely excited by. There’s hushed atmospherics in the rears channels and loud noises to help sell the jump-scares, but of most interest was the low humming that underscored a lot of the movie’s soundscape and gave scenes where it appears a bit of added strangeness. The dialogue is very clear and certainly no real complaints with the A/V in general.

It’s a shame the same can’t be said about the bonus material on the disc, which is barebones and not really worth your time.