An illustrious British boarding school becomes a bloody battleground when a mysterious sinkhole appears at a nearby fracking site unleashing unspeakable horror.

Good friends on and off screen, Simon Pegg and Nick Frost are one of today’s greatest comedy double-acts. Originally beginning their career together in the Channel 4 sitcom Spaced (1999-2001), they also starred in Edgar Wright’s revered ‘Cornetto Trilogy’ (Shaun of the Dead, Hot Fuzz, The World’s End), while finding time for other Hollywood projects such as Paul (2011). In 2016, Pegg and Frost created their own production company, Stolen Picture, of which Slaughterhouse Rulez marks its first release…

Crispian Mills, lead singer of indie band Kula Shaker, swaps his guitar for the director’s chair. The singer-songwriter comes with an unfortunate amount of expectation due to his family background, being the son of Roy Boulting—one-half of the Boulting brothers who made Brighton Rock (1948) and The Guinea Pig (1948). His mother, Hayley Mills, also starred in The Parent Trap (1961), while his grandfather is legendary thespian Sir John Mills (Great Expectations). 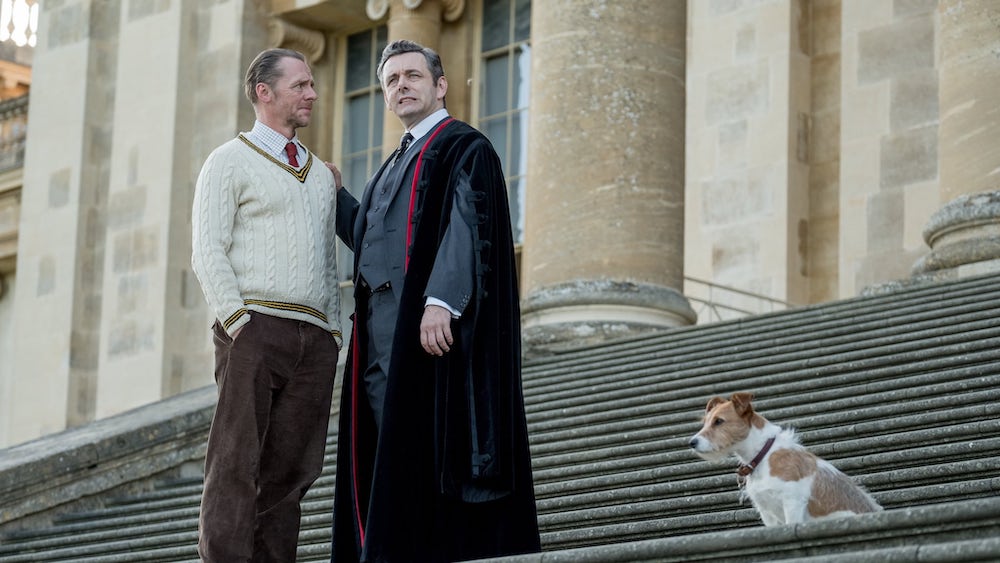 As co-writer and director, Slaughterhouse Rulez is certainly a step up from A Fantastic Fear of Everything (2012), Mills’ debut film and previous collaboration with Pegg. Here, Mills delivers a confection of British Boarding School classics, such as Goodbye Mr Chips (1969), with a dash of Harry Potter, and puts them in a Dog Soldiers (2002) setting. There are plenty of nods to UK cult classics throughout and a little social commentary thrown in for good measure, but Mills also draws on his own experiences bouncing between state and private schools, and never really belonging to either world.

Coming from a working-class northern home, Don (Peaky Blinders’ Finn Cole) is sent to posh boarding school Slaughterhouse in the genteel English countryside. Reluctantly trying to fit in everyone, he causes trouble by falling for upper-class beauty Clemsie (Hermione Corfield), which in turn makes him a target of bullying by head boy Clegg (Tom Rhys-Harries). Luckily, he finds a friend in roommate Will (Asa Butterfield) and they begin to challenge the status quo laid down by the headmaster—known as “The Bat” (Michael Sheen). Secretly leasing its land out to a fracking company, the school is now subjected to earthquakes and sinkholes that unfortunately awaken underground beasts… so the students are forced to survive as their peers fall prey to these unstoppable forces of nature. 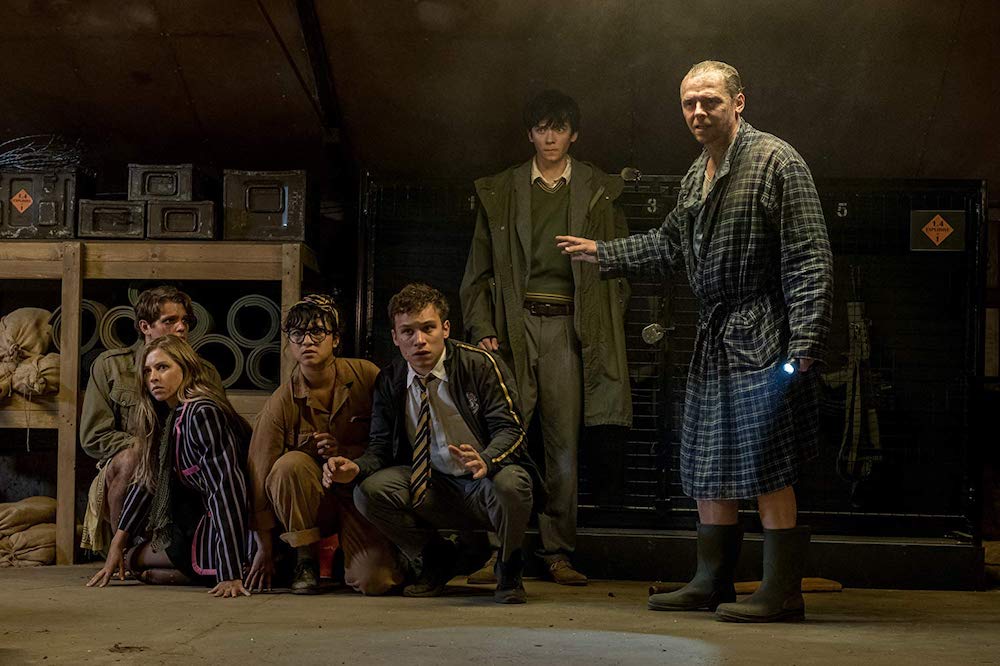 Cole plays Don as a relatable outsider, acting as audience proxy by stepping into this unfamiliar world of ith school-sanctioned bullying and prefects that refer to themselves as “Gods”. It’s enjoyable to watch Don find his feet amongst the rich kids as they try to impose their strict rules. upon him. He certainly isn’t afraid to step out of line and do his own thing, which introduced him to love-interest Clemsie. Sadly, Cole and Corfield (Rust Creek) do their best with the material, but their character’s romance is underdeveloped and both lack chemistry together.

Butterfield (The Space Between Us) plays sarcastic cynic Willoughby, an eccentric outcast who’s an archetype of public schoolboys. It’s easy to imagine Willoughby would be best friends with Malcolm McDowell’s character from If… (1968), and he’s the perfect sidekick for roommate Don. His dry sense of humour plays off well against Sheen’s stiff-upper-lipped headmaster, too, whose nickname “The Bat” is due to his gown imitating bat wings. Sheen portrays this character with a hint of evil and flamboyant theatrics, which is one of the most entertaining parts of the film. 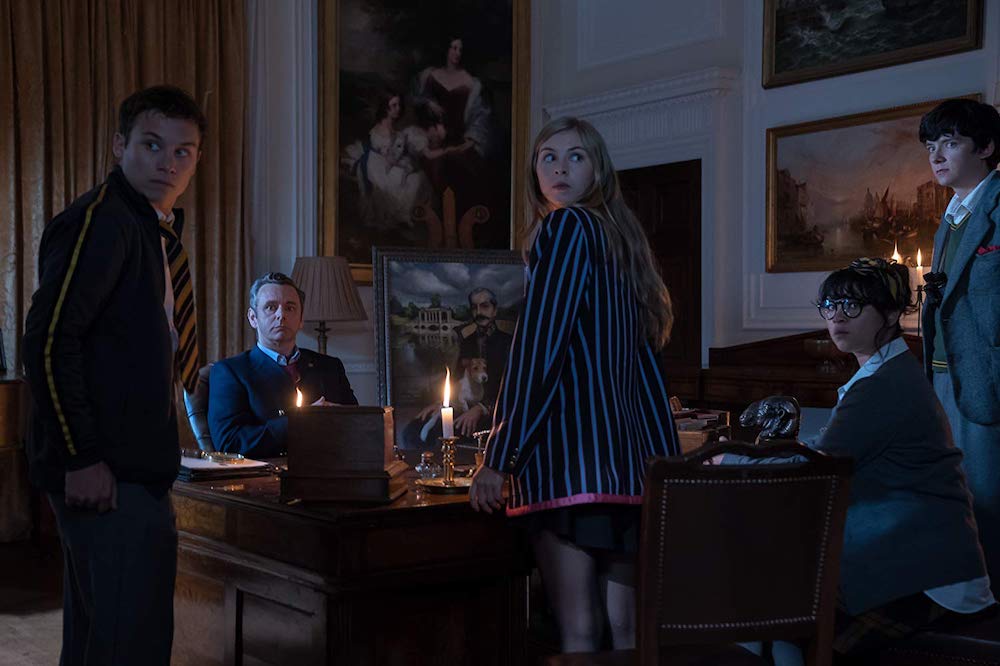 Unfortunately, those watching for another comedy pairing of Pegg and Frost will come away disappointed. Pegg plays lovelorn house master Meredith Houseman, again dumped by an out-of-his-league Aussie girlfriend in an echo of Hot Fuzz (2007)—here played by a cameoing Margot Robbie (I, Tonya). Meanwhile, Frost leads an anti-fracking group on the outskirts of the school grounds who, although interested in saving the planet, is more concerned with selling drugs to the students. These two actors always have the potential to create memorable moments on-camera, but Pegg comes across as whiny and unlikable and Frost is reduced to playing a cliched hippy.

Mills and his co-writer Henry Fitzherbert wear their many influences on their sleeves. Slaughterhouse Rulez feels similar to Attack the Block (2010), in how it’s about a bunch of teenagers facing an unknown paranormal entity. However, Mills’s storytelling lacks quality in its structure. The first two acts are laborious and feel more like a teen soap opera, feeling like The History Boys (2006) before transforming into a darker version of St Trinians (2007). There are plenty of subplots bubbling away but not enough momentum to keep things together. As we’re drip-fed information about Greek mythology and unearthly beasts, the obvious foreshadowing becomes tiring. But once the creatures rise from the ground the film comes to life. 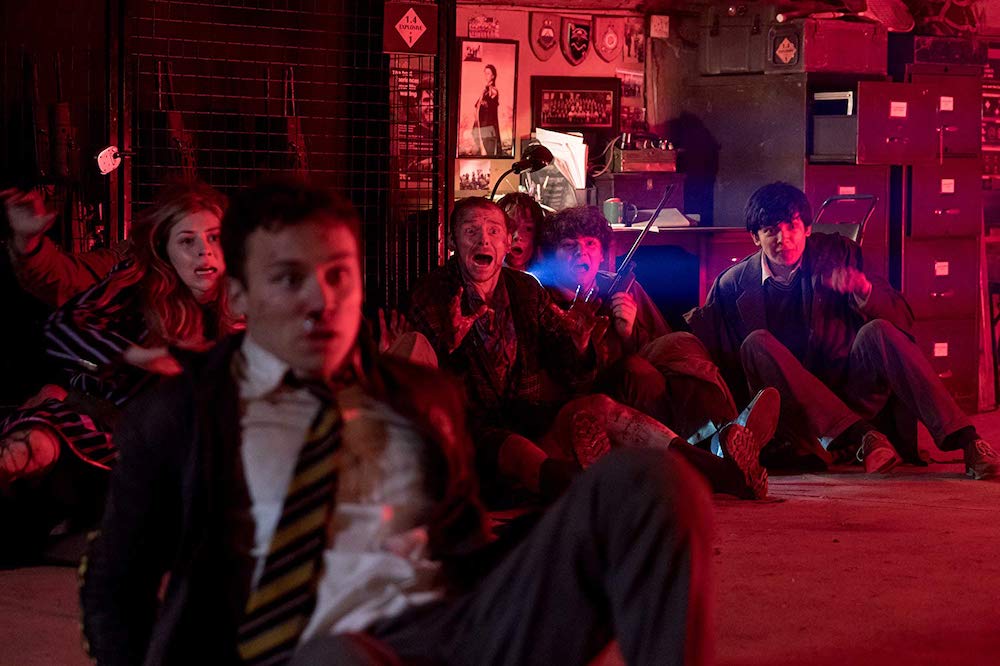 Slaughterhouse Rulez is directed with lots of whiplash pans and rapid edits, mimicking Edgar Wright’s style. With so much of the same DNA of the Cornetto Trilogy in this production, it’s difficult not to compare it to Wright’s oeuvre. There are even similar sight gags, like a fence-jumping scene, Pegg weaponising a cricket bat, and later enjoying an ice cream. There’s a patchy tone to this horror-comedy that’s neither funny or scary, as the majority of the jokes fail to hit the mark or seem very predictable.

Although its horror element fails to elicit any effective scares, there are some gruesome moments, but I found myself wanting more. It would’ve been nice to see the characters put into more terrifying situations but, perhaps due to the creatures not showing up until the last 20-minutes, it became little more than a school-set slasher. However, credit to the VFX team behind the practical creatures, because they’re excellent and help give things a nostalgic B Movie feel.

With a sharper script Slaughterhouse Rulez might have been something special, as Mills tackles controversial subjects like fracking and teen suicide as subplots that feel surprisingly relevant. It’s just they soak up too much of the film’s runtime and make it feel like and issues-based drama more than a full-blooded comedy-horror. The third act is where the genre comes to the fore and Mills does put together some funny, blood-soaked thrills… but, by then, you’ve probably fallen asleep. 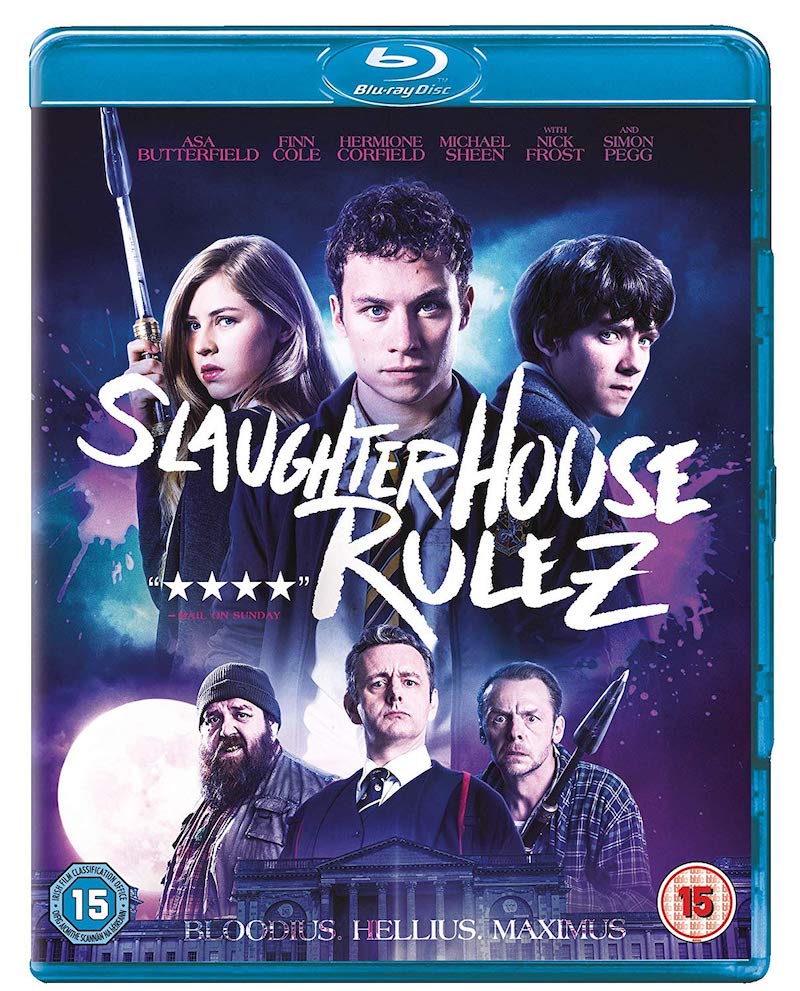 The 1080p transfer keeps its crisp picture quality from corner to corner. Character close-ups reveal precise skin details such as skin lines and hair with good clarity. Many of the night scenes reveal very deep blacks and shadows, and the picture is sharp enough to pick out tiny details in the student’s rooms, such as magazine cutouts on the walls. Several wide angle drone shots capturing the school and surrounding forest also look beautiful. Slaughterhouse Rulez gets the most out of its DTS Master Audio 5.1 surround sound mix. Dialogue is clear and sound effects are prominent during the horror scenes, particularly when the creatures get wounded.

Written By
Jono Simpson
More from Jono Simpson
Both dumped by their girlfriends, two best friends seek refuge in the...
Read More