There’s a moment halfway through Star Wars: The Force Awakens when I realised I was completely on board with the movie. It’s the wordless exchange between Harrison Ford and Carrie Fisher as former flames Han Solo and General Organa (née Princess Leia), when they see each other for the first time in years. I was enjoying myself until then, but I got misty-eyed at Han and Leia’s reunion for reasons that go beyond simple nostalgia (I never teared up at Indiana Jones and the Kingdom of the Crystal Skull, and I like that movie).

The movie literally opens with an image of the giant shadow cast by Star Wars and its sequels, and director J.J. Abrams deliberately structures The Force Awakens around echoes of George Lucas’s original trilogy. This could have been a huge misstep, like the botched tweaking of Star Trek II’s ending in Abrams’ previous feature, Star Trek Into Darkness. It mostly works, though, partly because Abrams’ sensibility is more naturally suited to Star Wars than Star Trek, but also because the movie is all about a younger generation discovering their destinies in the shadow of the past. There’s a natural poignance to having Ford, Fisher, and Mark Hamill reprise their most famous roles for the first time in over three decades. 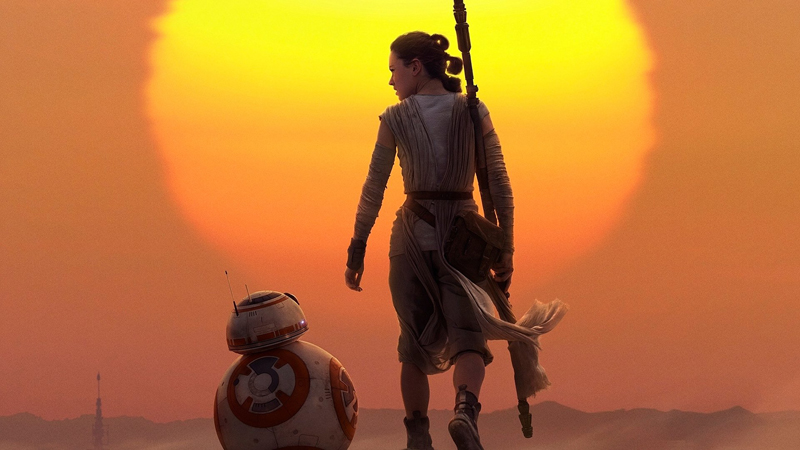 The movie begins 30-years after the events of Return of the Jedi, as the Resistance battles the First Order, a military group formed from the remains of the Empire. No Star Wars movie has made its villains’ fascist undertones as explicit—in the opening sequence, Stormtroopers massacre a village during a night-time raid, and secondary bad guy General Hux (Domhnall Gleason) later goes full Hitler while addressing his assembled troops, who respond with a very familiar salute. Abrams and co-writer Lawrence Kasdan, working from a story by Michael Arndt, deliberately mirror the original film’s story structure and simple “unambiguous evil versus ideologically vague but equally unambiguous good” conflict, complete with a planet-destroying mega-weapon. Rather than avoiding comparisons with the original movies, Abrams has embraced them—it may be ‘fan service’, or whatever one wants to call it, but it works far better than it has any right to.

Much of the credit for The Force Awakens goes to its three young leads. Abrams’ greatest strength has always been casting, and his unexpected and, in one case, unknown choices for our new heroes and villains are inspired. As desert scavenger Rey, Daisy Ridley gives a star-making performance—it’s great to have a strong, self-reliant female protagonist at the center of this new trilogy, but thanks to Ridley, she’s a fully realised, empathetic heroine, compelling for reasons that go way beyond gender roles. As Finn, a Stormtrooper gone AWOL, John Boyega is alternately hilarious and more than up to the task when the script calls on Finn to be a hero. Resistance pilot Poe Dameron (Oscar Isaac) has less of a character arc than the others, but Isaac lends grit and rugged charm to what could have been a cookie-cutter character (it helps that he’s easy on the eyes). The three have great chemistry together, and they help steer the movie past its occasional plot holes (the less said about the business with a certain map, the better), as we care enough about our heroes to follow them anywhere. 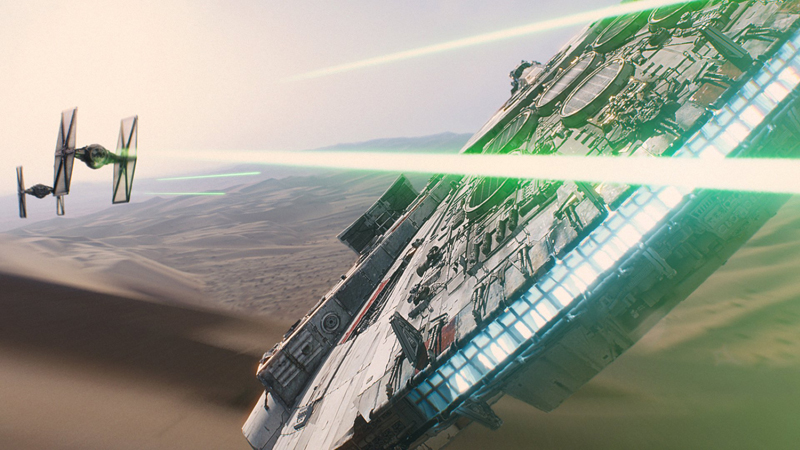 Just as strong as the good guys is Adam Driver as villainous Kylo Ren, a former pupil of Luke Skywalker who turned to the Dark Side, sending his teacher into self-imposed exile. Mask and voice distortion aside, Ren isn’t ‘Darth Vader redux’; he’s conflicted and not in complete control of his powers, and Driver’s performance succeeds at the kind of nuanced villainy Lucas was presumably aiming for with young Anakin Skywalker in the prequels. The heroes and villain alike have just taken their first steps into a larger world, with Han playing a scruffier version of the Obi-Wan role (Ford hasn’t been this much fun onscreen in ages).

As we learn more about Ren, The Force Awakens reveals itself as a story about families playing out generation-spanning conflicts; while Lucas approached his creation through the lens of myth and archetype, Abrams smartly honours those elements but plays to his strengths. Abrams’s dramatic instincts are closer to Spielberg than Lucas, and focusing on the human drama at the core of the story makes for the first emotionally compelling Star Wars movie since Jedi. When the movie reaches its climax, the moment has genuine dramatic heft that goes beyond our memories of the scenes it’s echoing, and it’s worth noting that, in a movie filled with special effects spectacle, what will be one of its most talked-about moments is all about character and performance. 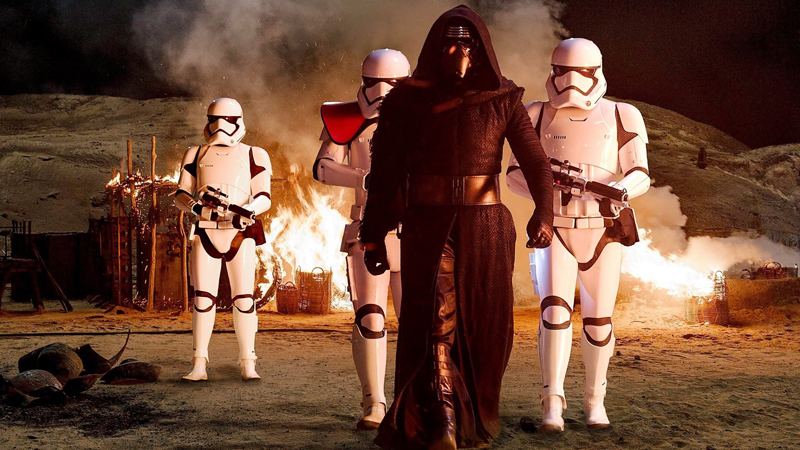 The Force Awakens is a triumph of production design; evoking the ‘used future’ vibe of the original movies without simply copying the work of the original’s team of artists. Abrams and cinematographer Dan Mindel favour the kind of clean scope compositions and centred framing familiar from the originals, and the action sequences favour spatial continuity and sustained images over rapid-fire cutting. The whole movie plays like an enjoyable throwback. If I have any issue, it’s overfamiliarity. Given the weight of expectations the movie faced after Lucas’ much-maligned prequel trilogy, it’s not surprising that Abrams and his corporate overlords at Disney decided to play it safe, and he deserves a lot of credit for getting through what must have been an arduous development process with a lot of cooks in the kitchen and delivering a movie as entertaining and often moving as this one.

It’s just that, between reminding us why we liked these movies in the first place and establishing a new direction for this next trilogy to take, The Force Awakens never feels groundbreaking in the way the originals did. The new movie gives Star Wars fans who felt burned by the prequels exactly what they wanted, but even if The Force Awakens is stronger than the prequels in many ways, I hope the makers of future instalments will have the opportunity to follow Lucas’s lead and take risks, and that Disney will trust its storytellers with the future of the franchise—rather than trying to impose a Marvel-style corporate strategy on the storylines (Andy Serkis’ new Emperor-type villain, Snoke, has Thanos-y vibes that gave me pause). Thankfully, Abrams has laid the foundation for any number of interesting directions the Star Wars saga could now go. And with the next instalment being directed by a filmmaker, Rian Johnson (Brick, Looper), who’s proven incapable of predictability, I can’t wait to see where this story is headed next.

The biggest compliment I can give The Force Awakens is that I went in somewhat sceptical of the hype-machine surrounding the endeavour, and now I can’t wait for Episode VIII.