It won’t win plaudits for storytelling complexity or depth, but George Miller’s Mad Max: Fury Road is a stuntman’s fever-dream come to engine-roaring life. A reboot of the Australian director original trilogy (that introduced the world to Mel Gibson), it feels like Miller’s spent the past thirty years dreaming up crazy ideas to feed into Fury Road. And now they’ve been unleashed as an antidote to the summer glut of CGI-overloaded blockbusters. That’s not to say Fury Road‘s devoid of digital trickery (very far from it), but it’s foremost a practical filmmaking endeavour.

Fury Road‘s a thrilling two-hour chase that cleverly decides to drop audiences into its perverse world, asking you catchup to its weirdness. It’s not initially clear why Max Rockatansky’s (Tom Hardy) been captured by a tribe of albinos, become the bonnet ornament of “War Boy” Nux (Nicholas Hoult); or, indeed, why Imperator Furiosa (Charlize Theron) has stolen an armoured War Rig of gasoline from chieftain Immortan Joe (Hugh Keays-Byrne; Toecutter in the 1979 original). 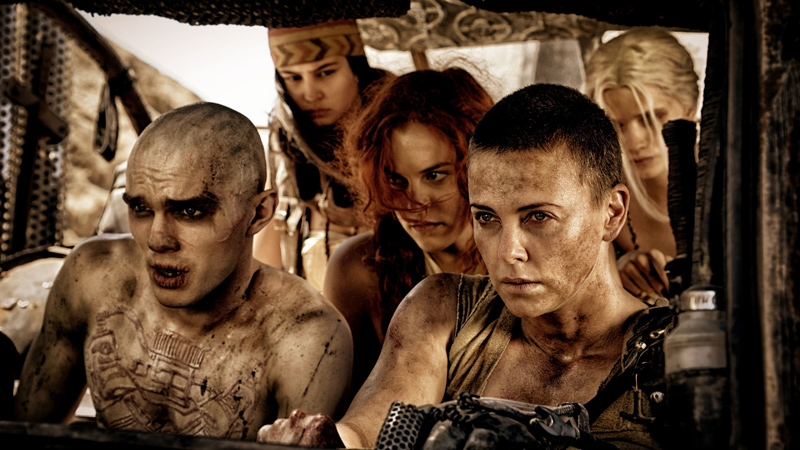 Once you acclimate to the Iron Maiden-meets-Cirque du Soleil craziness, grasping what the characters are doing and why, Fury Road becomes a streamlined action feast for the eyes. And my God, there hasn’t been a large-scale pursuit this rousing and spectacular for years—although I won’t join the chorus by claiming Fury Road‘s a game-changer. It’s just an impressive reminder that audiences love well-choreographed action that feels real because, well, it largely is. While it’s true orchestrating this scale of mobile mayhem is easier in an empty desert than a busy city, that shouldn’t undermine the achievement. I’m sure the inhospitable climate brought its own headaches, too. You can almost smell the oil and gasoline of Fury Road‘s metal monsters as they tear through the desert, and you’d be forgiven for squinting with anticipation of tyre-churned sand flying in your eyes.

Beyond the jaw-dropping orchestration of its wheeled machines, and the inventiveness of how the pursuers aim to stop the renegade War Rig, a number of smaller creative decisions also delighted me. Despite having his name writ large in the title, Max is often secondary to this story. He’s incapacitated for the first action sequence climaxing with a gigantic sandstorm, and often feels like a sidekick to Imperator Furiosa; the story’s real hero, who happens to have crossed paths with a useful old dog like Max (who’s even muzzled for the first act of the film).

Furiosa’s a character who ascends to the higher pantheon of unforgettable female action stars, too—sitting proudly alongside Terminator 2‘s Sarah Connor, Aliens’ Ripley, The Matrix‘s Trinity, et al. I’m certain Theron’s doormat’s going to be littered with scripts full of similar roles, and with good reason. How different the beautiful South African actress’s career might have been if Aeon Flux had been good… 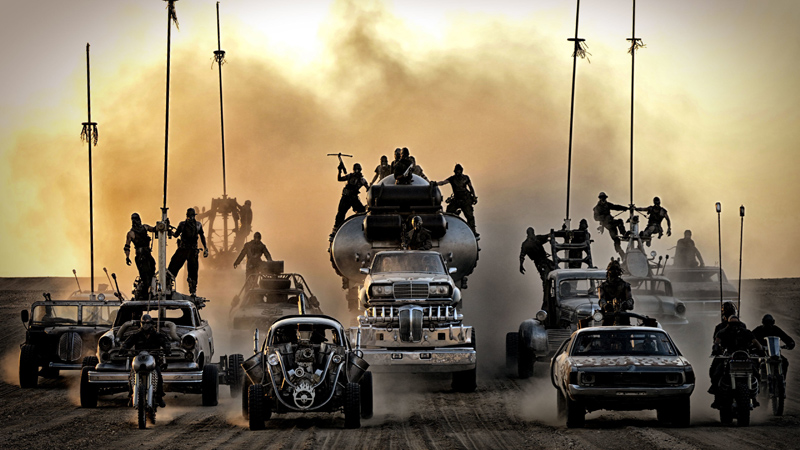 The success of Furiosa isn’t an accidental feminist highlight, either. The movie’s very concerned with the enslavement of women, as Furiosa’s aim is to help Immortan Joe’s harem escape a lifetime of sexual slavery. They’re playthings of an old tyrant who quaffs breast milk, but the film never allows its target audience of young males to see them as second-rate people. Joe’s wives have agency, prove themselves very skilled, and are relevant cogs in the machine, not clueless bimbos shrieking for an Alpha Male rescuer. It’s likely intentional that Michael Bay’s objectified Transformers: Dark of the Moon star, Rosie Huntington-Whiteley, is playing Joe’s pregnant wife Angharad, and acquits herself very well.

This pleasingly pro-feminist angle helps elevate Mad Max beyond its otherwise modest aims, but of course the insane stunts are what everyone’s going to be thrilled with. Miller recently announced another two more films are now being prepped for release, now Fury Road‘s been met with widespread praise and healthy box-office takings, although it’s hard to imagine how he could top himself. But if he does, the next two road trips are going to be one hell of a journey.

Written By
Dan Owen
More from Dan Owen
In a war-ravaged Kenya, a U.S soldier with amnesia and a French...
Read More