In the lead up to Series Nine of Doctor Who in September, my review of Series Eight examines the merits and pitfalls of four episodes, from “Time Heist” to “Mummy on the Orient Express”, in the middle of 2014’s run. They demonstrate a series trying to find new ways of refreshing genre conventions while driving forward the motifs established in the opening episodes. (For the previous catchup, read Part One; for the subsequent catchup, read Part Three.) 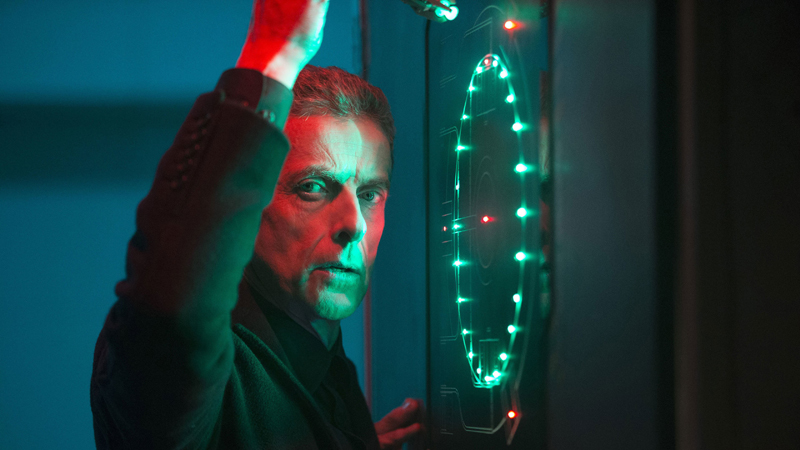 In contrast to the darker and more contentious stories that follow, “Time Heist” provides an entertaining homage to the heist genre. It proudly wears on its sleeve many Ocean’s Eleven influences (director Douglas Mackinnon makes use of the wipe as scene transition) and indulges in some Reservoir Dogs slow motion swagger and flashbacks to tell its non-linear story.

Hired by a mysterious Architect, the Doctor gathers a team of ‘experts’ to rob the impregnable bank of Karabraxos. However, writers Steven Moffat and Stephen Thompson use a clever bait and switch narrative to reveal the robbery is actually a rescue mission. Through an act of deathbed redemption by cloned banker Ms / Madame Delphox (Keeley Hawes), they must save the last of an enslaved telepathic species she has ruthlessly exploited.

The production cost cutting during the escape through the bank vaults, obviously reusing the same bit of corridor with different coloured lighting, is perhaps the only disappointment. The simple pleasure of “Time Heist” is its smart script and the deftly delineated supporting characters of the Doctor’s associates Psi, an augmented human (Jonathan Bailey), and shape-changer Saibra (Pippa Bennett-Walker).

Psi and Saibra underline the episode’s play with narrative misdirection, memory and identity and reflect the Doctor’s own detachment and self-importance. Capaldi is very assured as the Doctor, with the “shuttity up-up-up” line a cheeky nod to his renowned role as Malcolm Tucker. The Doctor’s continuing self-examination of his principles as a good man is also pertinent to the twist that he is the much hated “overbearing” and “manipulative” Architect. 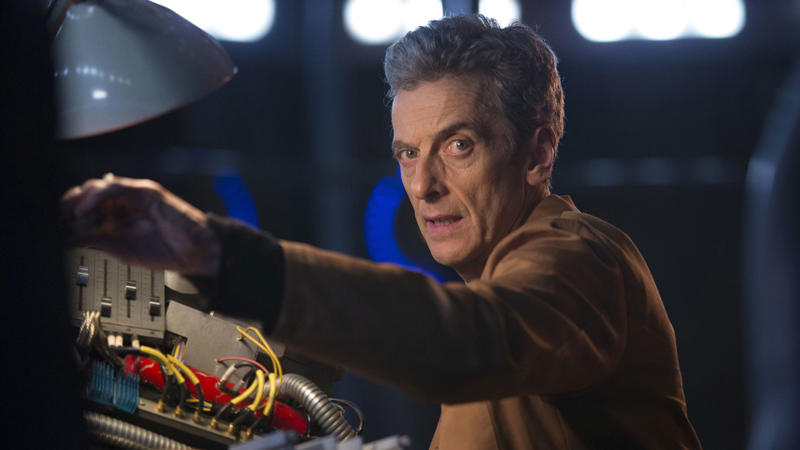 Overtly recycling “The Lodger” and “School Reunion”, “The Caretaker” again features a fish-out-of-water Doctor as an undercover school employee. In this amusing screwball comedy he poses as a caretaker at Clara’s school to prevent the incursion of a Skovox Blitzer (Jimmy Vee), a merciless robot weapon of war capable of destroying the Earth.

As a counterpoint to the farce of preventing the robot from disrupting a parents’ evening, Clara’s double life with the Doctor and Danny is severely tested, placing her in an impossible position. This inevitable and disastrous collision of their lives leads to the painful aftermath seen in “Kill in the Moon”.

The Doctor becomes jealous and cruel when introduced to Danny and projects onto him his self-hatred as a Time War veteran and habitual dislike of the military. He condescendingly refers to him as ‘PE’ because he doesn’t believe a former soldier has the intelligence to be a Maths teacher.

It was never the intention of writers Steven Moffat and Gareth Roberts but there is implicit racism and sexism in the episode. When the Doctor belatedly realises that Danny (a black man), and not his preferred choice of Eleventh Doctor look-a-like Adrian (a white man), is Clara’s boyfriend and hurls more ‘PE’ insults in his direction it looks like racial prejudice. Young black actors also play the Coal Hill School pupils who are codified in the episode as truants or shoplifters.

However, the Doctor also indulges one such pupil, Courtney Woods (Ellis George), with a tour of the TARDIS. While child characters in Doctor Who are rarely successful, she is an identification figure full of precocious curiosity who later makes a powerful impression in “Kill the Moon”.

It’s also retrogressive the Doctor is positioned as a “space dad” vetting Clara’s choices in men. When Danny vilifies the Doctor as a commanding officer figure who incites Clara to participate in many dangerous situations, it suggests he wants to make decisions for Clara too. The Doctor and Danny are contemptible in “The Caretaker”, souring our sympathy for them both as damaged soldiers. It also alienates against the coda of redemption through moral choice and self-sacrifice we are shown in “Death in Heaven”. 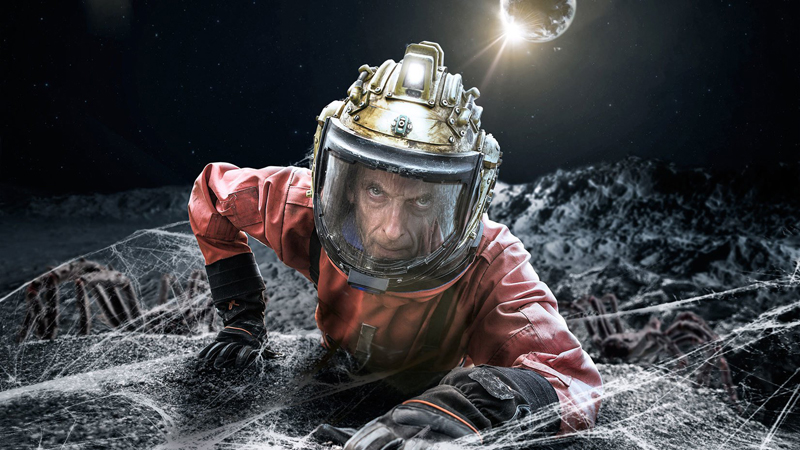 There is much about “Kill the Moon” to admire and it pursues high-concept ideas after a run of episodes recycling well-worn situations. Peter Harness’ premise is both absurd and an attempt to deal with genuinely powerful subject matter.

Harness follows Moffat’s request to “Hinchcliffe the shit out of it” with the first half’s horror material after the Doctor, Clara and Courtney crash land on the lunar surface in 2049. They encounter a suicide mission, led by Captain Lundvik (Hermione Norris), to destroy the moon after its changes in mass have wreaked devastation on Earth. When they discover a lunar colony is overrun by flesh eating giant spider creatures, director Paul Wilmshurst effectively ramps up the body horror, claustrophobia and tension as the spiders attack.

After the Doctor disappears beneath the surface to investigate, Lundvik sees no alternative and primes nuclear devices to destroy the moon. Here the script takes an audacious left turn. The Doctor returns, reveals the spiders are germs and the moon is an egg about to hatch a giant creature after a million years of gestation. Humankind is faced by a moral dilemma and, as the countdown begins, the Doctor abdicates his authority, cruelly leaving Clara, Courtney and Lundvik to decide if they should murder an unborn creature in order to save humanity. It effectively restates the main tenet of this series about taking responsibility for both the good and bad choices you make.

Only after the Doctor rescues them from the hatching moon is Clara’s choice to save the creature properly recognised. He reveals that this birth initiates humanity’s colonisation of the stars. Outlandish it may be but it is the final scene in the TARDIS, featuring Coleman’s intense performance as the indignant Clara, that truly resonates. She bitterly castigates the Doctor for his patronising attitude, abandoning her to make such a important decision, and angrily ends their relationship. 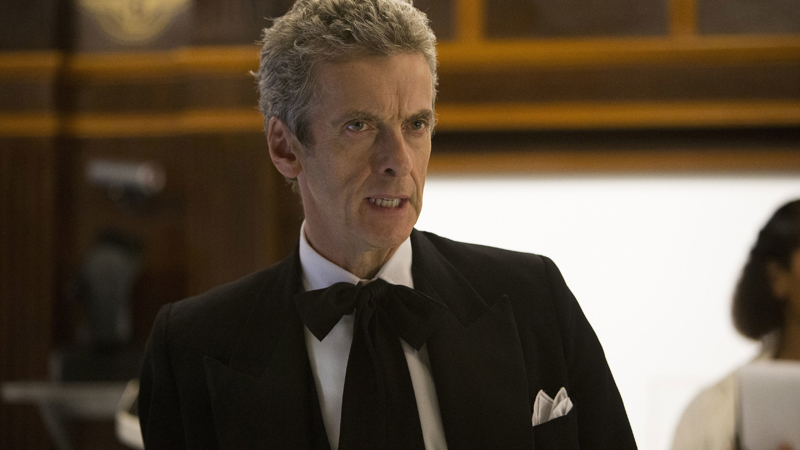 Jamie Mathieson’s “Mummy on the Orient Express” is on surer ground and begins with an awkward rapprochement between the Doctor and Clara where, despite Danny’s protestations, they decide to experience one last adventure together. They plunge into a classic ‘locked room’ mystery aboard a sumptuously wood panelled, steampunk version of the titular train. The passengers are being murdered by a mummy, a supernatural creature called the Foretold that drains their life energy in 66 seconds. All is not what it seems and the train is revealed to be laboratory controlled by Gus (John Sessions), a computer that demands the Foretold is exploited for its phase shift technology.

Despite its recurrent Moffat theme of malfunctioning technology out of control as the reason for a five thousand year old supernatural myth, this rattles along on its hyperspace ribbons. It’s fuelled by some impressive intercutting and sparky dialogue, features a rather scary monster and further complicates the Clara, Doctor and Danny relationship. The ‘military mind’ arc running through the series is also underlined with the mummy revealed as a soldier full of tech awaiting a surrender order.

Buoyed by Capaldi and Coleman’s performances, the episode offers a perspective on the Doctor’s arrogance and heartlessness highlighted in “The Caretaker” and “Kill the Moon”. His view that “sometimes the only choices you have are bad ones. But you still have to choose” compounds Clara’s lies to Danny about leaving the Time Lord when she actually decides to keep having adventures with him. Next time, I’ll be looking at how these consequences inform the final episodes of the series…