In preparation for next weekend’s arrival of Series Nine on the BBC (19 September), the concluding part of my review of Peter Capaldi’s debut year, Series Eight, covers the last four episodes, plus the 2014 Christmas special. (For previous catchups, read Part One and Part Two.) 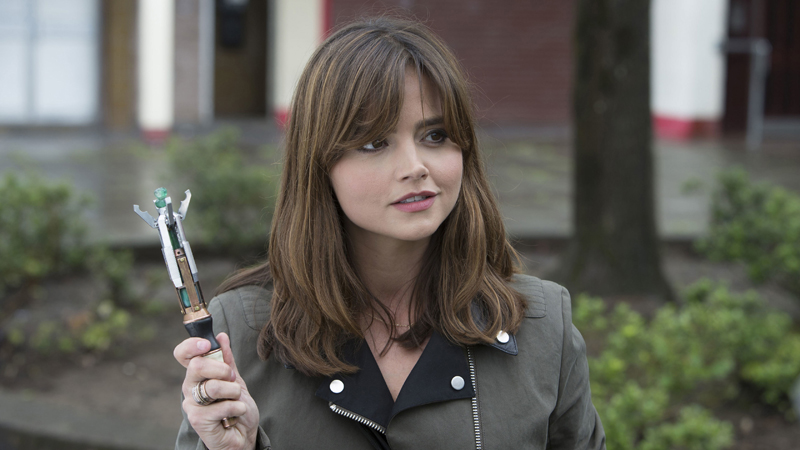 Told with convincing economy by director Douglas Mackinnon, “Flatline” sees Clara standing in for the Gallifreyan nosy parker after the Time Lord becomes trapped inside his shrinking TARDIS. She has her work cut out for her, as two-dimensional entities invade our world with shuffling, broken, three-dimensional versions of their victims.

Like the method used by the Boneless to understand three dimensions, the story perceives Clara from a different angle and free of the Doctor (Peter Capaldi) and Danny’s influence. She’s accompanied by another well-defined ensemble of supporting characters, including graffiti artist on community service Rigsy (Joivan Wade) and his bullying supervisor Fenton (Christopher Fairbank).

More significantly, the Doctor overhears her phone conversation with Danny and realises she has lied to both of them about her decision to continue travelling in the TARDIS. Congratulating herself for having done a good job fending off the invaders, the Doctor brings Clara down a peg by claiming, “goodness had nothing to do with it.” It seems he’s still preoccupied about the impact of good and bad choices. 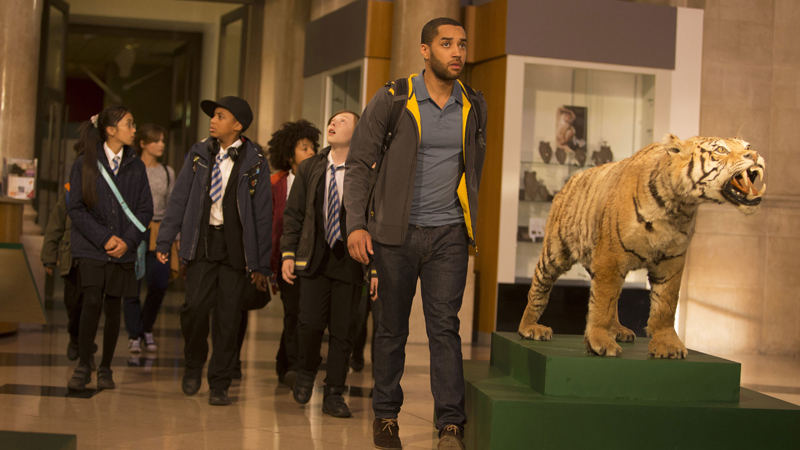 Together with the titular analogy to William Blake’s poetic examination of human destiny and renewing our perception of the world, Frank Cottrell Boyce’s “In the Forest of the Night” taps into a range of classic fairy tales and myths of renewal and purification.

He weaves a fable about ancient alien elementals that cover the Earth’s cities and population under a forest to protect the planet from an oncoming solar flare. In this greener world, The Doctor and Clara are reunited with Danny leading a party of school children on a trip to a London museum.

As a symbolic eco-fairy tale it functions reasonably well, but its lyrical sincerity sits uncomfortably within the tougher Doctor Who format. This bathos supports a whimsical view of whole forests appearing and disappearing with little acknowledgement of the damage caused to man made structures.

The themes of trust and making the right choices continue to resonate, especially when Clara elects to stay behind with Danny and the school children, rather than escape with The Doctor, to await their unknown fate as the solar flare reaches the Earth. 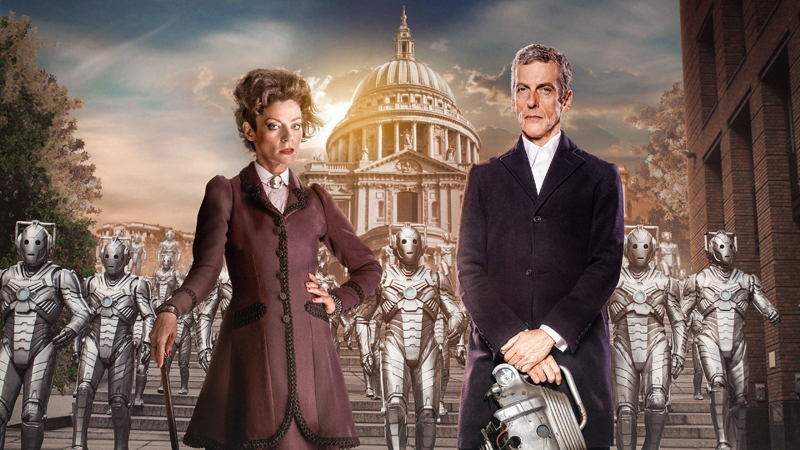 The mawkishness of “In the Forest of the Night” gives way to the grim and morbid finale opener “Dark Water”. It begins with Danny Pink’s unceremonious death, moments after Clara declares her love for him, and ends with his self-sacrifice as a reanimated Cyberman. The series’ reputation for death and horror broadens and explores the numbing impact of grief, and the sacred and profane aspects of life-after-death.

In a stunning scene, Clara’s grief influences her demand The Doctor goes back in time to save her boyfriend Danny. When he refuses to help, she destroys all his TARDIS keys in the heart of a volcano. But, in a typical piece of Moffat reversal, The Doctor is actually one step ahead of her.

The betrayal in the volcano is her drug-induced vision caused by the sleeping patch she tried to dope him with in the TARDIS. Despite her actions, he affirms their friendship: “Do you think I care for you so little that betraying me would make a difference?”

They trace Danny to the Nethersphere; an afterlife managed by the mysterious 3W corporation, so named after three words: “don’t cremate me”. It’s a tasteless aspect of Missy’s lugubrious scheme, where “the dead remain conscious… the dead remain fully aware of everything that is happening to them,” to convert humanity’s dead into Cybermen.

“Dark Water” is the stronger, more atmospheric half of the story and a bitterly satirical view of the afterlife that, with shades of Powell and Pressburger’s A Matter of Life and Death, is described as a bureaucratic data storage service industry. 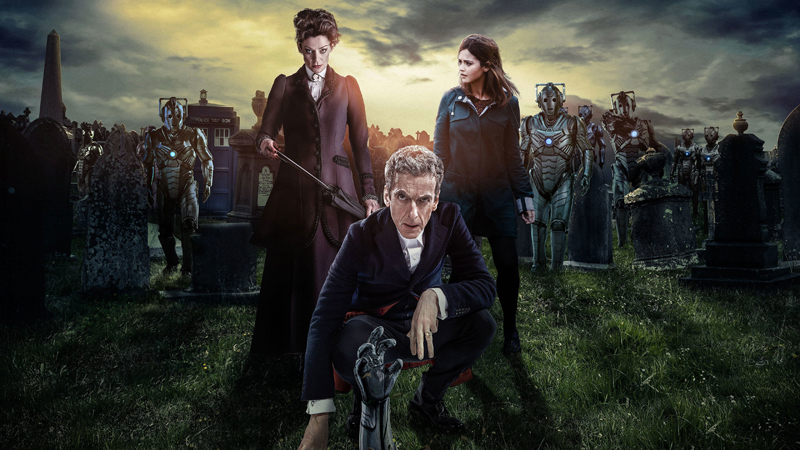 Images of the Cyber-converted deceased rising from their graves are powerful in “Death in Heaven” but the Cybermen are primarily used to re-stage previous iconic appearances from the series. Only Danny’s conversion captures their dehumanising horror, corresponding to The Doctor’s search for the goodness in himself and Danny’s redemption as a ‘good soldier’.

The ‘good soldier’ theme emerges in The Doctor’s unwanted promotion to Earth’s Commander-in-Chief, his truculence with UNIT’s Colonel Ahmed (Sanjeev Bhaskar) and saluting the Cyber-corpse of Brigadier Lethbridge Stewart. The use of the latter character is of questionable taste, however, and an odd way to divest The Doctor of the onus to kill Missy.

Missy believes she and The Doctor share the same moral position. She gives him the military power he needs to right the universe’s wrongs. Naturally, he refutes this, rejecting the idea that he is a good man, a bad man, a hero or a soldier, and claims he is only “an idiot, with a box and a screwdriver, passing through, helping out, learning.”

Danny, with emotions powerful enough to override Missy’s Cyber programming, inevitably thwarts her plans by taking on the mantle of commanding officer in an act of self-sacrifice. He also assuages his guilt about a young Afghan he killed on a tour of duty and, instead of himself, chooses to return the boy from the Nethersphere using Missy’s bracelet.

In the coda to this dour story, Clara and the Doctor tell each other necessary lies. He pretends he has found Gallifrey after Missy told him its location and Clara bluffs along with his assumption that Danny returned from the Nethersphere. Their parting hug is of course the physical manifestation of this deception: “Never trust a hug. It’s just a way to hide your face.” 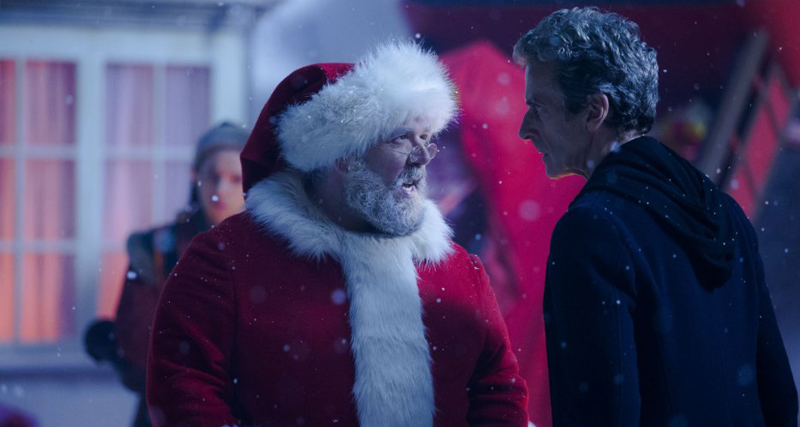 Of the Christmas specials to date, “Last Christmas” is the darkest yet. Director Paul Wilmshurst, who expertly handled the horror elements of “Kill the Moon”, gets to indulge in Moffat’s homage to the body horror and possession nightmares of Alien, The Thing From Another World, Videodrome and, crucially, the lucid dreaming structure of Inception.

A horror thriller combining an arctic base under siege from slimy monsters and the incongruous seasonal trappings of Christmas, is an apt vehicle for the equally ridiculous realms of fantasy and reality. It’s a melancholic view of Christmas, too, marked as a final gathering together of loved ones, particularly for Clara and Danny. It shows the folk myth of Father Christmas (Nick Frost) is one we cling to subconsciously to survive the reality of another year’s end or, in this case, a lonely death by dream crab.

Woven into this nightmare is a bittersweet resolution to Series Eight—the Doctor and Clara admit they both lied to each other when they last parted and Clara’s dream re-connection with Danny gives her the impetus and understanding to move on with her life. Capaldi and Coleman excel when the Doctor and Clara reconcile and they get a second chance to enjoy their friendship after he shares his regrets with an aged Clara in a dream.

Peter Capaldi firmly establishes himself in the role during the 2014 series. He does not give a poor performance despite an uneven run of episodes and some rash story decisions. We have yet to see the definitive Capaldi episode, although “Listen” and “Flatline” are of clear distinction. Given more opportunities to develop Clara as a fully realised character, Jenna Coleman forms a great team with Capaldi.

So, on to Series Nine and many unanswered questions. Join me for “The Magician’s Apprentice” and the start of my weekly reviews, here at Frame Rated from 21 September…

SHOW ME A HERO – Part Two