It’s been 14 months since the third season ended with “Lantern“, so you’d be forgiven for having a hazy memory about how it concluded. Better Call Saul has never been in a hurry, certainly not once the writers realised they enjoyed writing ‘Jimmy McGill’ (Bob Odenkirk) more than his alter-ego Saul Goodman, so it’s no surprise “Smoke” was a slow and thoughtful opening to season 4. And that’s perfectly fine, because this was an episode designed to reflect on recent events, particularly for Jimmy in the aftermath of discovering his brother Chuck tragically died in a house fire.

Before all that, we got another of the show’s rare “flashforwards” to Jimmy living under his false identity of ‘Gene’ in the Cinnabon. Events pick up where we left off in “Mabel” (the third season premiere, that aired April 2017), with Jimmy collapsing at work and being rushed to hospital. These scenes always come with a thick coating of dread, heightened by the stark black-and-white cinematography, as Jimmy’s life is now one of constant paranoia that someone will realise he’s a fugitive and throw him in jail for aiding and abetting drug lord Walter White.

“Smoke” delivered a masterclass in suspense during the scene where Jimmy, given the all-clear by doctors, tried to leave the hospital but got dragged back to the front desk by a well-meaning receptionist who needed his drivers’ license and social security number. It’s no surprise that Better Call Saul can squeeze drama out of a man hesitantly speaking numbers aloud. But for all the suggestion Jimmy’s cover was about to be blown, climaxing with a weird journey home with a taxi driver making lingering eye contact (an apparent fan of the Albuquerque Isotopes, so perhaps he recognised “Gene” from the local papers), he lives to sweat through another day in Cinnabon purgatory. 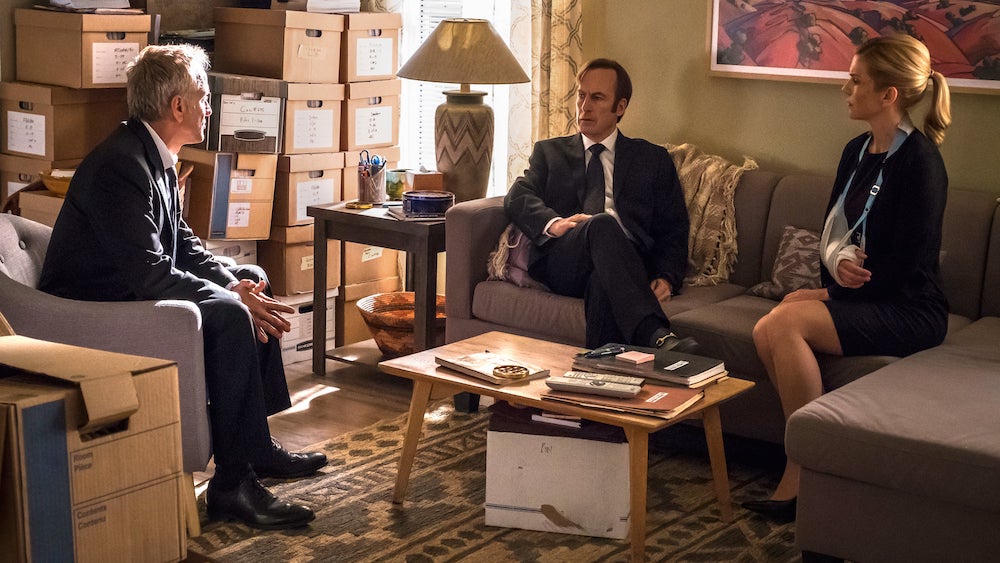 In the past, Jimmy learns about Chuck’s shocking death after Howard (Patrick Fabian) calls him at home, which comes as an understandable gut punch. Odenkirk was very good in these moments, communicating Jimmy’s disbelief and sorrow in a manner that wasn’t overblown and thus felt very real. What was confusing to Jimmy is how Chuck was apparently on the mend, as he saw him only five days ago and he wasn’t exhibiting signs of his irrational electromagnetic hypersensitivity. But now it’s clear his brother suffered a terrible relapse he wasn’t around to help him cope with, as Jimmy notices electronic devices had been moved out of the house before the blaze took hold.

For much of this premiere, Jimmy’s stuck in a cloud of misery, unable to listen to Howard proof-read his brother’s obituary, then sitting through the funeral looking life the world’s just ended. Of course, we know that Better Call Saul is ultimately about a good man losing his soul to greed, so by the end of the hour Jimmy was in a very different place. After hearing Howard pour his heart out about his perceived role in Chuck’s death, theorising he committed suicide after being removed from his beloved law firm (after their malpractice insurance skyrocketed due to his condition), Jimmy suddenly regained his old spirit and started whistling and making coffee.

Despite knowing he was more to blame, because he purposefully let slip to the insurers know about Chuck’s mental health issues, Slippin’ Jimmy is able to compartmentalise that guilt and shift the blame onto poor Howard’s shoulders. Chuck’s tragic end is Howard’s “cross to bear” now, so Jimmy’s decided to move on and forget the truth of the matter, realising that with a guilt-ridden Howard and no cynical big brother holding him back… he can enjoy a freedom long denied him. 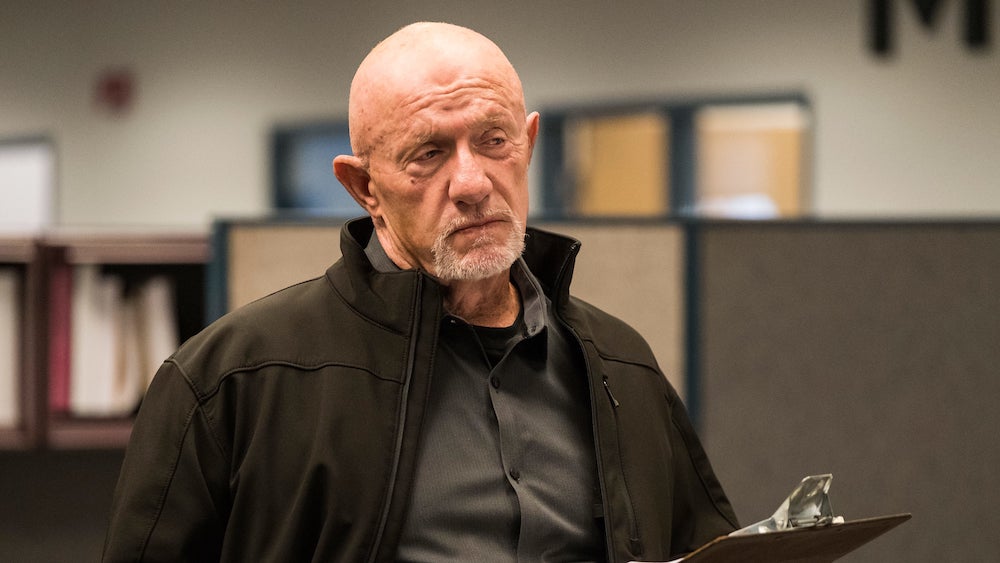 In one of two smaller subplots, we spent a day with Mike (Jonathan Banks) work as Madrigal Electromotive’s new “security consultant”; a cover provided to him byLydia Quayle on behalf of Gus Fring (Giancarlo Esposito) so he can launder his ill-gotten gains. And in true Ehrmantraut style, he’s not going to just sit around and cash every $10,000 cheque he receives each week in the post. Oh no, he has a job to do! Who cares if it’s just for show.

Better Call Saul is the best TV show around for taking simple ideas and expanding them into beautiful, oddly entertaining ‘humdrum’ set-pieces. Mike’s activities during “Smoke” were just to test Madrigal’s security, by stealing an employee’s ID card before he started work, accessing the building without being stopped, then floating around the various offices (even getting involved in conversations about Muhammad Ali vs. Bruce Lee), before driving around the warehouse in a buggy noting security flaws and procedural deficiencies. And then letting the higher-ups know.

A bad pill to swallow.

The other big ramification of “Lantern’ we’ve been waiting patiently to see is the situation with Nacho (Michael Mando), who swapped his boss Hector Salamanca’s (Mark Margolis) heart medication for placebos. This led to Don Hector suffering a stroke in the middle of a business deal, leaving arch rival Gus (Giancarlo Esposito) to pick up the pieces.

And it seems to have been a welcome stroke of luck for Gus, as Juan Bolsa (Javier Grajeda) now wants him to continue Hector’s operation without any hiccups. Although Gus pointedly warned that sticking with the Salamanca family is going to soon result in the DEA getting involved. I wonder if we’re laying the ground for the next Breaking Bad cast appearance, as it would make sense if Hank enters the story soon. It’s certainly much easier to work a DEA agent like Hank into Better Call Saul’s storyline right now, compared to the obviously more popular Walter White and Jesse Pinkman.

Now that Gus is in charge, he’ll undoubtedly start doing what he can to destroy Bolsa’s confidence in the Salamanca clan, and one assumes Hector’s ill health is going to lead to his mute confinement to a wheelchair with only his infamous dinging bell to communicate with. Nacho appears to have gotten away with his treachery, seen disposing of the swapped pills over the side of a bridge, but is being watched and tracked by Gus’s henchman Victor… so maybe his position isn’t so tenable after all.

Or Gus will learn the truth of what happened with Hector, and use that as leverage to keep Nacho in his pocket for whatever he has planned next. And staying in the drug’s game is precisely what Nacho doesn’t want, and hoped to escape with his pill-swapping gambit, so I’m left wondering if he’s going to pull a similar stunt to escape Gus’s orbit and wind up paying the ultimate price a second time…