The trailers are already playing on BBC One and very soon we’ll be joining Peter Capaldi for his sophomore outing as Doctor Who. However, before the ninth series arrives on 19th September, let’s look back on how Capaldi acquitted himself last year. More than that, I’ll also consider the significant question of self-doubt that overshadowed his incarnation of The Doctor: “Am I a good man?” (For the subsequent catchups, read Part Two and Part Three.) 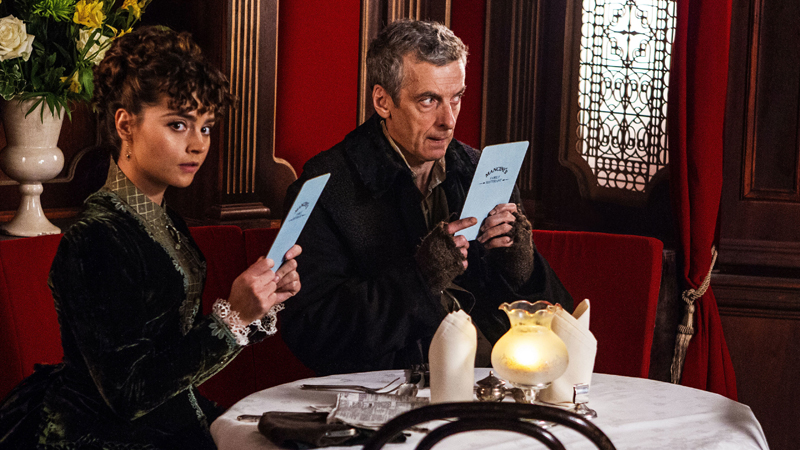 When “Deep Breath” premiered last August there was a tangible sense of anticipation about Peter Capaldi and whether he would prove his worth as the Twelfth Doctor. Would younger fans embrace an actor as old as William Hartnell was when he took on the role in 1963? Would the Doctor’s friend Clara Oswald (Jenna Coleman) manage to develop beyond the restrictive “impossible girl” story arc of Series 7? And how would she adjust to the new Doctor?

By using familiar surroundings—the Victorian detective milieu of the Paternoster Gang’s Madame Vastra (Neve McIntosh), Jenny Flint (Catrin Stewart) and Strax (Dan Starkey)—”Deep Breath” successfully alleviates our initial anxieties about this new Doctor. A dinosaur disgorges the TARDIS and a post-regenerative Doctor onto the bank of the Thames and the mystery of the dinosaur’s presence is connected with the machinations of clockwork robots attempting to repair their ship (a return to the themes of “The Girl in the Fireplace”). However, writer Steven Moffat sensibly concentrates on the trauma of regeneration to address Clara’s struggle, among old friends, to see beyond the veil and not to prejudge The Doctor by appearance alone.

Agitated by his transformation, The Doctor asks, “who frowned me this face?” but the mystery about his uncanny resemblance to Roman merchant Lucius Caecilius Iucundus, from “The Fires of Pompeii”, and Torchwood: Children of Earth’s Home Office permanent secretary John Frobisher is yet to be solved. His simple plea, asking Clara to “please, just see me”, concludes an adventure where the motif of casting aside old assumptions to reassemble the self is carried through The Doctor’s rebirth, the steampunk droids patching themselves up from human body parts, and Clara’s own self-examination.

The symbolism of the automata striving to find ‘the promised land’ is cleverly used as a counterpoint to the humanity that Clara wants to rediscover in the new Doctor. The power of memory (a major theme of Matt Smith’s era), is engaged to reassess the Doctor’s moral choices and purpose. A phone call from the Eleventh Doctor on Trenzalore assuages Clara’s trepidation in accepting this older, dangerous man as her Doctor. “Deep Breath” not only allows Capaldi to passionately imprint himself on the character but also provides Coleman with a better-defined role. Missy (Michelle Gomez) also makes her perplexing debut as an “evil Mary Poppins”, foreshadowing the grim conclusion to the series as she welcomes her various charges to “heaven”. 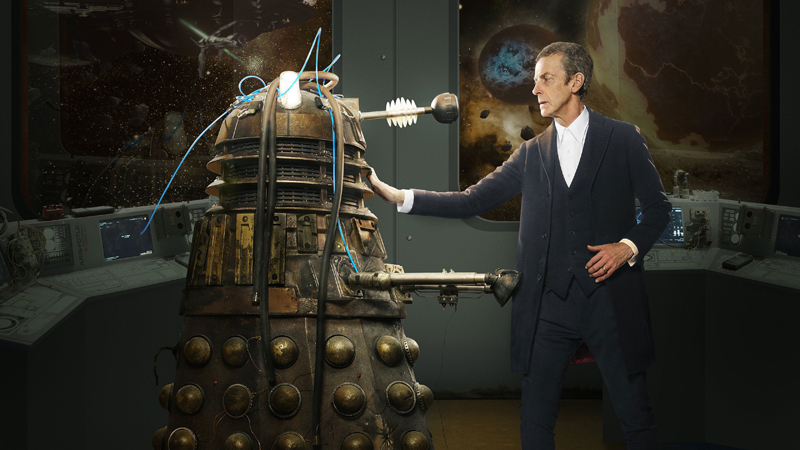 The question of the Doctor’s impact on the universe, either for good or ill, is the central theme of “Into the Dalek“. During a future Dalek War, the Doctor and Clara are miniaturised (à la Fantastic Voyage, Inner Space and 1977’s four-parter “The Invisible Enemy”) and sent on an investigative mission inside a morally-conflicted Dalek. Less a full throttle Dalek adventure, the episode is more concerned with defining your morality when you inadvertently cross the fine lines between good and evil, love and hate.

The Doctor and the Daleks always define each other within a long-standing Faustian pact and “Into the Dalek” exposes the darker realms of the Doctor’s philosophy. He encourages in the morally-compromised Dalek mutant an appreciation for the beauty of the universe. However, his hatred for them, cultivated since his first encounter on Skaro, affects the Dalek’s new moral perception and it demands death to all Daleks. In a nod to 2005’s “Dalek”, The Doctor is not the good man he aspires to be and is declared “a good Dalek” by his sworn enemy.

Writers Phil Ford and Moffat also introduce Clara’s Coal Hill Secondary School colleague Danny Pink (Samuel Anderson); a former soldier turned Maths teacher. A hint of his traumatic experience in the Army is indicated when a pupil asks him if he ever killed anyone. His guilty tears offer a counter perspective to the Doctor’s conflicted moral principles in the story. As we will see, Danny’s growing relationship with Clara stimulates an antagonistic attitude toward the Doctor as he learns about, and attempts to diminish her attraction to, their dangerous adventures together. 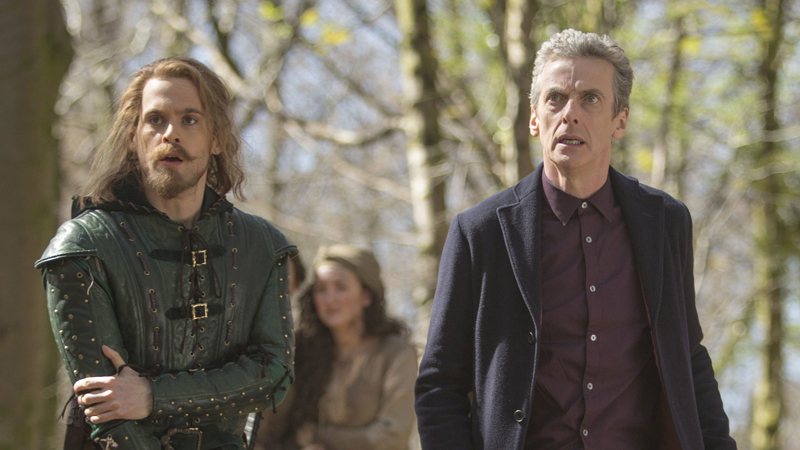 In lighter, comedic contrast is “Robot of Sherwood“, which, beneath Mark Gatiss’ spirited and witty homage to the Robin Hood iterations of Errol Flynn and Richard Greene, attempts to delve into the persistence of popular myth. The Doctor sets out to prove to Clara that her childhood hero, Robin Hood, never existed… but he finds that, like his own grand narrative, the myth never dies and lives forever, constantly reinterpreted through storytelling.

Still exploring his identity, The Doctor is given pause for thought by Clara’s shrewd assessment that he and the outlaw are larger-than-life figures not restrained by history. However, there are moments when this rumbustious celebrity historical turns the self-knowing nature of the episode, and good performances from Capaldi and Tom Riley as Robin, into shouting matches that are more about being hyperbolically masculine than enduring mythical archetypes. Coleman’s chemistry with Capaldi and Riley also pays dividends with the further development of Clara as the series progresses. 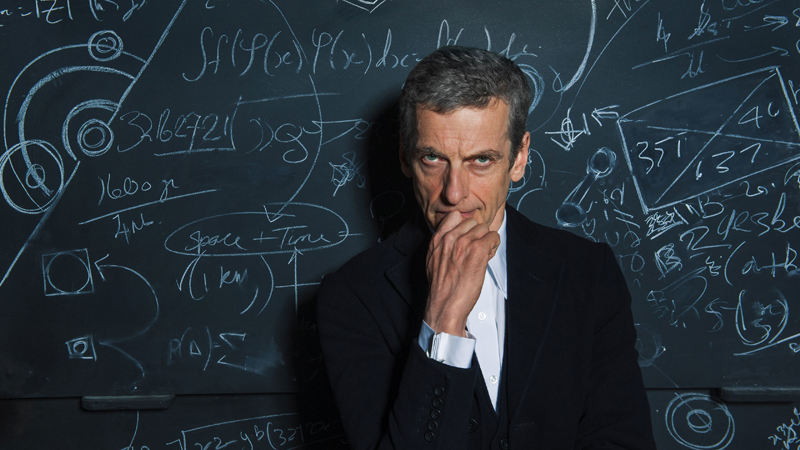 The Doctor, Clara and Danny’s destinies converge in “Listen“, another of Moffat’s accomplished but strange, time-twisting explorations of irrational fear. Clara’s first date with Danny becomes a journey back into his boyhood as the Doctor ponders the origin of an archetypical childhood terror—the unseen monster under the bed reaching out to grab the disturbed sleeper’s ankles. This returns the series to the uncanny disruption of domesticity that, since 2005’s “The Empty Child”, Moffat has associated with the universe of children.

Although Moffat retraces his familiar signatures in “Listen”, it effectively analyses not only Danny’s lonely, repressed upbringing in a children’s home. but also the fate of his future, time-travelling descendant Orson, tortured by unearthly forces at the end of the universe. Clara becomes the emotional raison d’être shaping Danny and Orson’s worlds, the result of her philosophical intervention with an unarmed broken toy soldier, “a soldier so brave he doesn’t need a gun.” This is all symbolic of the Doctor’s belief in an unseen stalker, the shadow he attempts to define in “Listen”, as representative of the fears children process to negotiate the often frightening world around them.

Going a step further, Moffat uses this opportunity to take the audience and Clara back to Gallifrey where she becomes ‘the monster under the bed’ for the young Doctor. A child scorned by adults as unfit to become a true Time Lord, Clara reassures him that facing his fears will be his strength in the centuries to come. All these associations, particularly those that show the Doctor and Danny as similarly damaged soldiers who’ve made and must continue to make difficult moral choices, will resonate through the rest of the series.

These four episodes lay Series 8’s groundwork, showing how Capaldi’s Doctor operates within the recurring formats Doctor Who employs: regeneration story; encounters with familiar monsters; comedy historical, and dark fairy tale. Next week, I’ll look at how “Time Heist”, “The Caretaker”, “Kill the Moon” and “Mummy on the Orient Express” exploit and alter these story structures…