I was an instant fan of Unbreakable Kimmy Schmidt when it debuted last year. Tina Fey and Robert Carlock’s Netflix comedy was brimming with colour and energy, delivering streams of jokes every episode, and was the perfect vehicle for Ellie Kemper as the eponymous Kimmy—a naive young woman imprisoned in an underground bunker as part of a doomsday cult, only to be rescued 15-years later and returned to a world she’s less equipped to handle. It was a potentially dark series given the concept, but the effusive tone, themes of empowerment, and Kimmy’s enthusiasm helped it become something life-affirming and quite delightful.

I was very concerned going into season 2, however. The first season capped the story of Kimmy having to face her recent past in a courtroom trial against her captor, ‘The Reverend’ (Jon Hamm), and there didn’t seem to be much left to say on the matter. Indeed, there’s an unshakeable feeling throughout this season that Kimmy’s story has been told, as far as the underlying concept goes, and she’s now more of an “eccentric personality” it’s amusing to throw into various situations. 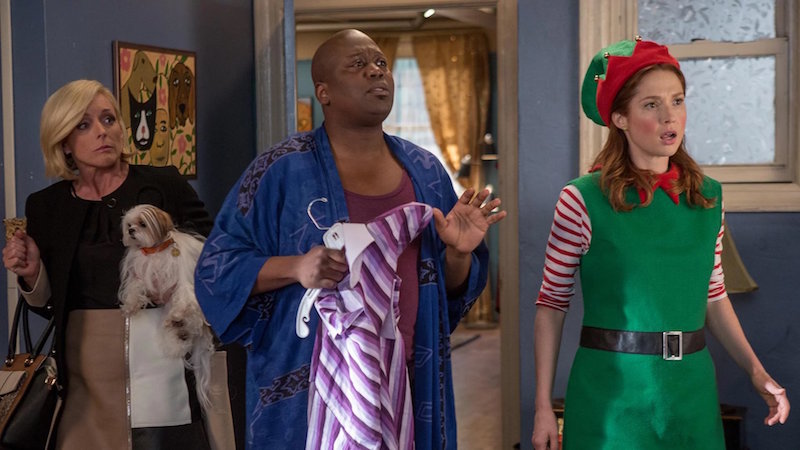 The early episodes of this season were particularly worrisome, because so few of the stories focused on Kimmy herself—as the writers found more mileage in the idea of wealthy socialite Jacqueline White (Jane Krakowski) dealing with the end of her marriage, which means she’s unable to afford the lifestyle she’s become accustomed to. Seeing Jacqueline trying to impress her circle of friends, despite “only” now having $12 million after a divorce settlement, was highly amusing. But while it’s great Krakowski gets more to do with a character who was too ludicrous last year, and Carol Kane likewise benefitted from better material as eccentric landlady Lillian Kaushtupper (Carol Kane), it’s a pity Kimmy Schmidt herself was pushed into the background so much. Titus Andromedon (Tituss Burgess), Kimmy’s gay housemate and actor/waiter, also enjoyed a poignant arc about starting a new romance with a macho Italian builder called Mike (Mike Carlsen), who hasn’t ‘come out’ to his family yet.

So by the time Kimmy was given a decent storyline about trying to find her mother, Lori-Ann Schmidt, it was too little too late—and the fact this formed the basis of the season finale didn’t work or seem earned. When compared to the higher stakes of season 1’s trial, which were a true culmination of the story we’d been following from the very beginning, the flaws with season 2 are all the more obvious. 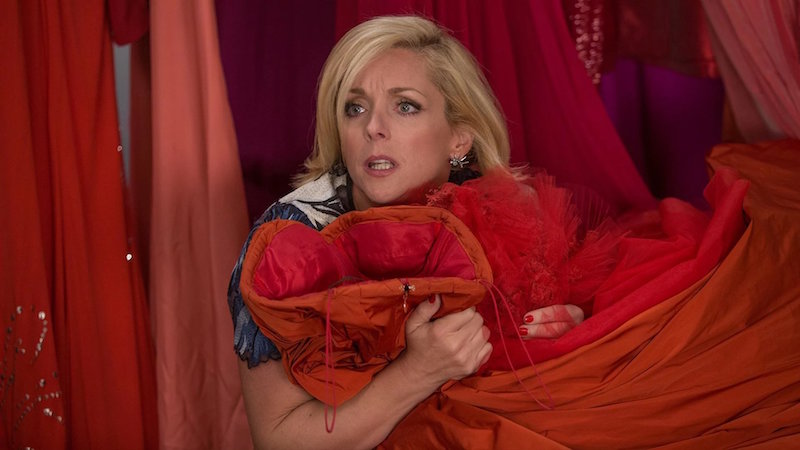 However, while Unbreakable Kimmy Schmidt didn’t succeed in finding a worthy arc for its radiant hero, and season 2 was thus weaker, there’s more than enough funny stuff to keep fans watching—if perhaps not bingeing quite as fast as last time. The show’s ear for dialogue and ability to weave pop culture references into episodes is exemplary. I particularly loved this year’s odd fascination with The Jinx’s Robert Durst—whose catchphrase “what a disaster” kept being uttered, and who (sort of) appeared as Lilian’s boyfriend ‘Little Bobby Durst’ (Fred Armisen). If you know your internet memes and funny tabloid stories, Kimmy Schmidt always rewards those with that jumble of trivial information stuck in their heads.

The celebrity guest appearances also remain a highlight—although a lot of the fun comes from not knowing who’s going to pop up next, so it seems cruel to spoil things too much. But to avoid the bigger surprises, it was great seeing Anna Camp (True Blood) as Deirdre Robespierre, a bored trophy wife determined to upstage Jacqueline, although she deserved a longer arc; while David Cross (Arrested Development) appeared as a sexually-inexperienced attorney with a third nipple on his foot. (Just one of countless hilarious details this show gives its characters.) I won’t say who plays talk show host ‘Dr. Dave’, but the casting is sublime and that particular episode—”Kimmy Meets a Celebrity!”—became one of my favourites as a result. 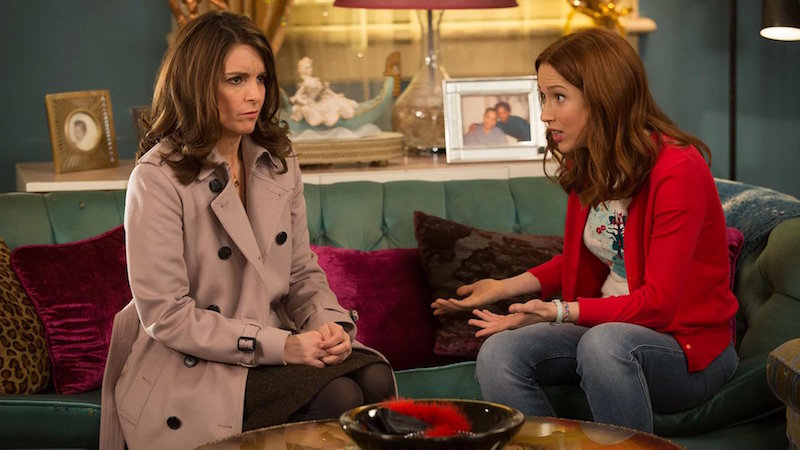 Less successful was co-creator Tina Fey’s appearances as Dr. Andrea Bayden, a therapist with a ‘Jekyll & Hyde’ personality brought about by alcoholism. Fey’s always a pleasure to watch, of course, but I just didn’t find the joke that a career professional becomes a drunken mess after sundown all that funny—and Dr. Bayden’s a character who soaks up a lot of screen time towards the end, after agreeing to help Kimmy get over her bunker experience. Interestingly, I’ve heard people say the exact opposite about my opinion about Dr. Bayden and the season’s direction in general, so what tickles your funny-bone may of course differ.

Whatever the pros and cons of the second season as a whole, Unbreakable Kimmy Schmidt remains one of the best sitcoms around. The cast are mesmerising; so much so that it’s hilarious just to watch them with the sound off. Kemper’s facial expressions are readymade for Tumblr GIFs, while the way Burgess pops and bounces his body during dialogue is a curious delight. The whole show has a little bit of indefinable magic, which is why it can get away with narrative problems elsewhere. My only real issue is that, like so many good US comedies, everything tends to wash over you—not helped by the fact Netflix shows tempt a binge.

If Kimmy Schmidt were broadcasting one episode per week, there’d be more time to savour and reflect on everything great about it. But having downed thirteen episodes in just over a week, I can only recall maybe eight jokes that left a lasting impression. The same thing used to happen with Community, too. There are just so many gags and funny asides, with so few breaks from it, that the cumulative effect can be amnesia.