Try not to take the title of No Escape too seriously. If you’ve seen any of the trailers you’ll know that there are, of course, numerous escapes. Indeed, the very act of escaping from ludicrous scenarios is the fuel for the plot of this film, which is all about instinct taking over as a family struggles to stay alive during a violent coup. It has been sold as a high-octane thriller, but this is actually more of an apocalyptic horror movie where the ravenous, mindless zombies are almost every single person who isn’t a member of the family at the centre of the film.

In No Escape, Jack (Owen Wilson) and Annie Dwyer (Lake Bell)—along with their two daughters Lucy (Sterling Jerins) and Beeze (Claire Geare)—have just arrived in an unnamed Asian nation to begin a new life. Jack’s an engineer, and has uprooted his family because his small water company was bought by a much larger firm that’s working in this area. Unsurprisingly, starting a new job and transporting two young kids all the way across the world is difficult, and things only gets a whole lot worse when war erupts in the streets, leaving every white person or tourist targeted by an army of vicious thugs.

It’s important to note that the violence appears to be racially motivated against white people in the film, because No Escape basically does for Asia what 2008’s Taken did for Europe, by aiming to reinforce American fears about travelling to foreign territories. It is astonishingly offensive and borderline racist in its portrayal of these characters, and the fact that it never names the country it is set in is in some ways an admission that it knows it’s painting politics with an incredibly broad brush. It depicts all the Asians in the film as either anonymous collateral damage or faceless, senseless monsters out to rape and kill everybody they can find. Towards the end, it attempts to clarify an explanation for the violence that turns the responsibility back on America and tries to justify the actions of the rioters, but that explanation can’t hope to work if it never once attempts to bestow any nuance upon characters outside of the Dwyer family. 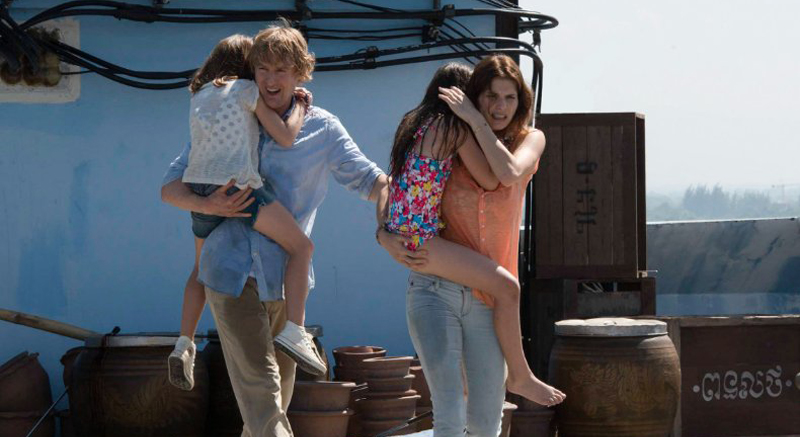 If you put the highly problematic aspects of the film to one side, though, you do find yourself with a really effective thriller that keeps things simple and is constantly ramping up the suspense. The incredibly narrow perspective of this one family keeps things really focused and puts you in their shoes for the duration of this rather unsettling experience. No Escape consistently challenges its characters to behave as real people would when stuck in such a desperate situation, and that leads it down paths that keep it from following a typical structure too closely. You feel the fear that these people are feeling, and there’s no moment where the film isn’t shown through their perspectives. It’s a clever decision, and it leads to some really uneasy and gripping scenes.

For example, there’s one scene where one of the two young girls needs to go to the toilet while they’re hiding from the rebels, and she’s told by her mother to urinate right then and there so that they don’t raise suspicion. You see the fear and confusion presented very convincingly in this moment, and it’s in the unusual little details like this that the film is able to keep things compelling. There are a couple more instances like this that put you right in the perspective of the family, but arguably there are too few moments that feel real as the film moves along. And as it gets closer to the end, it unfortunately succumbs to narrative conveniences too, like having another mysterious traveller who just happens to be a skilled fighter (Pierce Brosnan) occasionally assist the main characters when they’re in a tight spot.

Largely, the performances are solid enough. Almost everyone involved succeeds at conveying the level of panic and terror that they need to, so nothing stands out as jarring other than Brosnan’s bizarre character. What is more than a little insane is the direction, though, because this film is shot like a zombie film that sits somewhere between Zack Snyder’s Dawn of the Dead and Marc Forster’s World War Z. It probably shouldn’t come as a surprise considering that No Escape director John Erick Dowdle has previously brought us horror movies like Quarantine, Devil and As Above, So Below. He’s essentially taken that style and put it in a film where Asians are the threat that the main characters have to run away from. The whole thing is already horribly misguided before it even gets to scenes where Jack flings his kids between two rooftops in slow-motion, which is basically the most ridiculous and gratuitous way it could be shot!

From that scene, to an attempted rape, a child being forced to shoot her father, or a parade of executions on the street, No Escape is so laden with gritty and uncomfortable scenes that it becomes an unpleasant watch. That it also has some seriously xenophobic undertones and is presented in such a gonzo fashion means that its potential to be the exhilarating thriller that it frequently shows it can be is largely undermined. It’s an exciting watch, sure, but it’s also a really unpleasant one, and while it’s gripping enough to command your attention throughout, it ultimately leaves a bad taste.