I don’t have nearly as many observations as questions about “Battle Royale,” the penultimate episode of American Horror Story: Hotel. The series typically ties up whatever plot strands its showrunners deem worthy of tying up in the penultimate hour, leaving the finale as a denouement, which was quite effective in its first two years. While subsequent seasons have all gone off the rails after a strong start, narratively, Hotel has always been a mixed bag, and the most overstuffed season yet. But rather than repeat my season-long criticisms of the show, I’d rather focus on the confounding storytelling choices in this episode. While “Battle Royale,” which is credited to Ned Martel (who also wrote this year’s above-average “Room Service”), does seem to wrap up a few of the season’s storylines, it all felt oddly anticlimactic.

Iris (Kathy Bates) and Liz (Denis O’Hare) fail to murder the Countess (Lady Gaga), accidentally killing Donovan (Matt Bomer) during their botched shootout, but not before Iris succeeds in getting her dying son out of the Cortez—sparing him an eternity trapped within the hotel (though maybe the show’s selective “unfinished business” logic about which characters do and do not come back from the dead would’ve spared him?) Meanwhile, the badly injured Countess is rescued by Sally (Sarah Paulson), who convinces her to feed on a couple of her vampire kids to stay alive. In exchange for her help, Sally wants the Countess to lure John (Wes Bentley) back to the hotel so that she can kill him. Also, we get a flashback of Sally in the early 1990s, as a drug-fuelled threeway with two grunge musicians turns grisly. Hotel’s attempts at shocking imagery have grown increasingly tiring, and as someone who lives in an area where heroin addiction has become a great and tragic crisis, I’m getting really sick of the show’s faux-edgy heroin retro-chic nonsense. 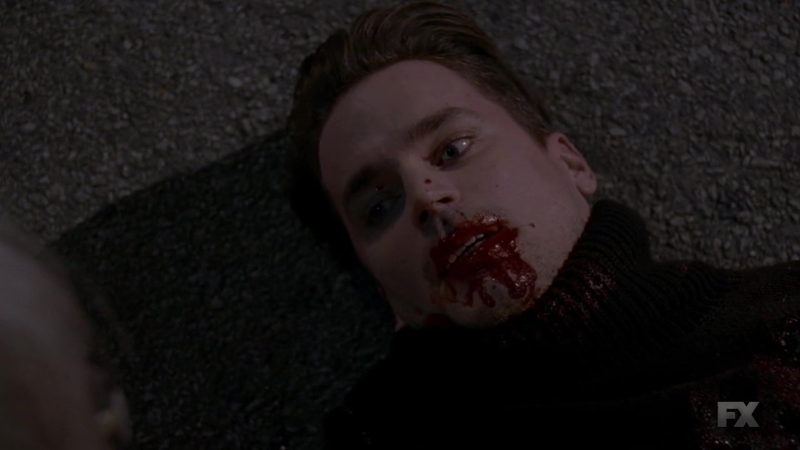 Other plans are set into motion after Iris and Liz free Ramona (Angela Bassett) from the (seemingly quite pregnable) impregnable fortress, where she’s been snacking on the vampire kids. Remember when that subplot seemed like it might be going somewhere? Before long, Ramona is battling one of the hotel’s guests, none other than American Horror Story: Coven’s Queenie (Gabourey Siddibe), in town for a taping of The Price is Right. As Queenie is a ‘human voodoo doll’, she seems to have the upper-hand until she’s suddenly bumped off by James March (Evan Peters), who explains that, as a ghost, her powers have no effect on him. It’s like Rock Paper Scissors—witch beats vampire, ghost beats witch. Hey, do you think any other Coven characters will show up looking for Queenie in the season finale, or is that giving the show too much credit for following through on something it sets up? 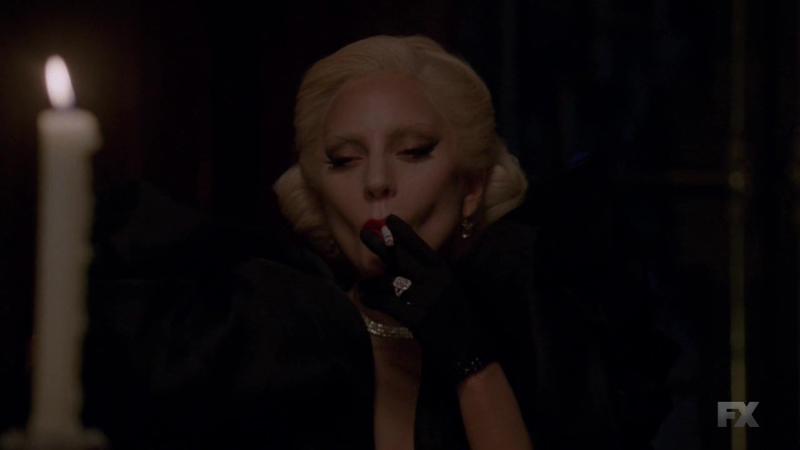 March explains to Ramona that he saved her so that she can kill the Countess, so he’ll be reunited with her for all eternity. So, with multiple characters wanting to take out the Countess, everything is set in motion for what will surely be the character’s gruesome, spectacularly over-the-top comeuppance. The show has been referencing The Hunger all season long, so surely we’ll see Gaga torn apart by the Countess’ victims like Catherine Deneuve at the end of Tony Scott’s film? Actually, this is what happens. Ramona arrives in the Countess’ penthouse ready to kill her, but after the Countess makes an emotional plea, Ramona realises that she can’t bring herself to kill her and do the one thing the show has defined her character by (I half expected Bassett to start singing “I’ve Grown Accustomed to Her Face”). In a bizarrely uncharacteristic show of good taste, the episode cuts away from the Countess and Ramona, about to have sex, to the Countess getting ready to permanently leave the Cortez. Instead, John, who is waiting in the elevator, shoots her, and adds her severed head to his collection of trophies, completing his Ten Commandments killings. 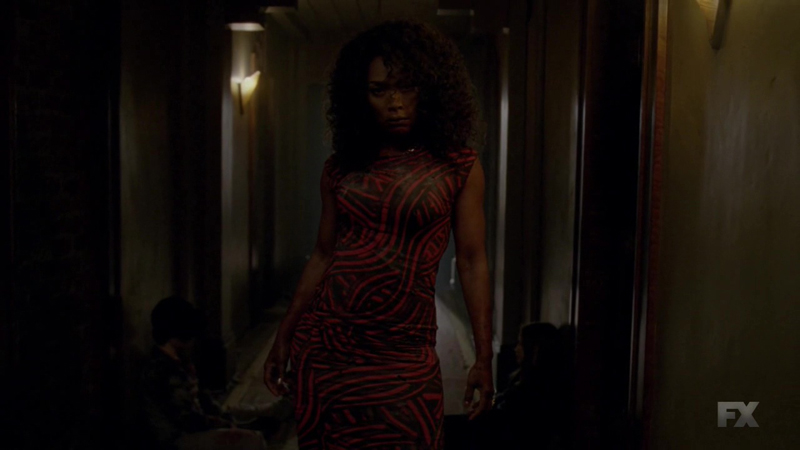 So, after building towards the Countess’ demise all season, they just have her get shot by Detective Boring in the most anticlimactic way possible, after putting the time into multiple exposition-heavy episodes (including this one) that laid the groundwork for a much more satisfying climax. It’s terrible.

We at least get a fun final scene between March, the Countess (who’s adjusting to life as a ghost) and Miss Evers (Mare Winningham), who’s banished after March learns she’s the one who ratted him out to the cops. It’s not a very dramatically consequential scene, but all three actors are fun to watch—especially Winningham, who’s been hilarious in a mostly peripheral role and plays Miss Evers’ exit with a peculiar sort of dignity. With the fate of John and his vampire family (except for his poor daughter) unresolved, Iris, Liz and Ramona left to run the hotel, the Countess’ monster baby still unseen, the demon with the drill penis still unexplained, and room for appearances by characters from Coven or other seasons, it remains to be seen which storylines the show’s writers can be bothered to resolve. Until then, I’m just thankful to whoever made the merciful decision to shorten this season by one episode.