There’s no real reason why films based on video games shouldn’t work. However, there can also be no denying that the vast majority of such attempts to appeal to the gaming crowd fail. At some point, as happened with comic-book movies, it’s possible that one of these films will really be a hit with viewers and the trend will pick up in a big way. Maybe that film will be next year’s Warcraft or Assassin’s Creed, but it most certainly isn’t the utterly forgettable Hitman: Agent 47.

This is a film that has a lot of plot to explain, and no elegant ways to do so. It begins with a far too lengthy voiceover detailing the ins and outs of the “Agent Program” (which developed genetically-engineered assassins with greater mental and physical capabilities than ordinary humans), before explaining that its creator Dr Litvenko (Ciarán Hinds) choose to abandon the program after realising the dangerous consequences of his experimentation. In the intervening years, many have tried to replicate what Litvenko had accomplished, but all have failed, with a company called “Syndicate International” coming closest. To finish Litvenko’s work, it seems he must be found and forced to reveal his secrets, and Syndicate International plans to do this by hunting down his mysterious daughter, Katia, whom he left behind as a child.

As if that’s not enough plot to wade through, you’ve got emotionless, robotic killer Agent 47 (Rupert Friend) also searching for the now-adult Katia (Hannah Ware) on behalf of his handler Diana (Angelababy), nd whatever shadowy, unknown assassination organisation they work for (the film doesn’t really care about helping us understand where 47 gets his orders from). After all the heavy exposition, the film doesn’t begin until 47 clashes with John Smith (Zachary Quinto) while they are tracking down Katia. 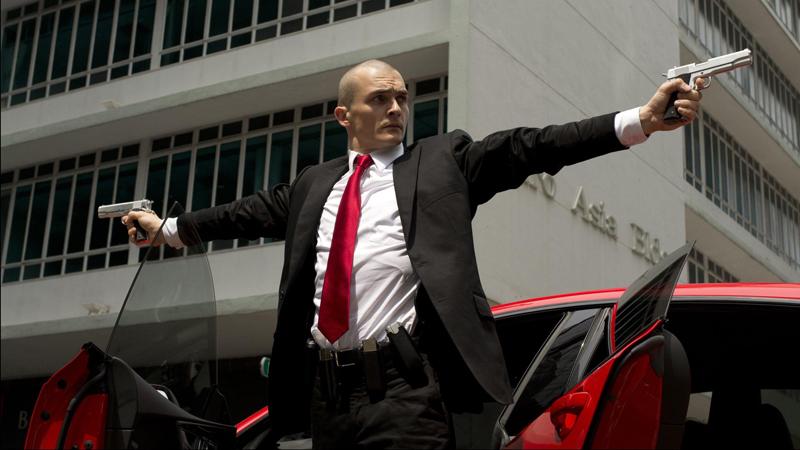 It can be read as both a compliment and a huge criticism that this is about as much like a video game as a film can be. Not only is it structured like one, it looks like one. It has a slick, hyper-stylised aesthetic that feels heavily inspired by The Matrix. It means almost nothing looks real, but everything is designed to look “cool” as 47 moves through pristine buildings evading gunfire and spraying blood all over the perfect white walls and furniture, while never looking fazed or losing composure in his tailored suit and red tie. There’s no doubt this whole thing is aimed at an audience of young men who play these games to feel like they’re the eponymous agile assassin; murdering everybody and sending their bodies bouncing off walls and down staircases. Unfortunately, by sticking so closely to this look, action choreography that could be impressive is rendered dull by CGI and slo-mo that makes everything feel fake and empty.

The paper thin structure and basic characters make it easy to view this exactly like a game. It’s not hard to see which bit is the “training mission”, where the “levels” begin and end, and who the “boss fight” will be against. Hitman: Agent 47 doesn’t aim to surprise or challenge, its main concern is with setting up impressive pieces of visual spectacle; so every development to the plot feels like it’s just happening to establish the next big fight. Anything that happens in between its fights or chases (seemingly sponsored by Audi, with hilarious amounts of product placement) just seem dull by comparison. They’re half-hearted efforts to explore characters and motivations in a film that can’t be bothered with either. 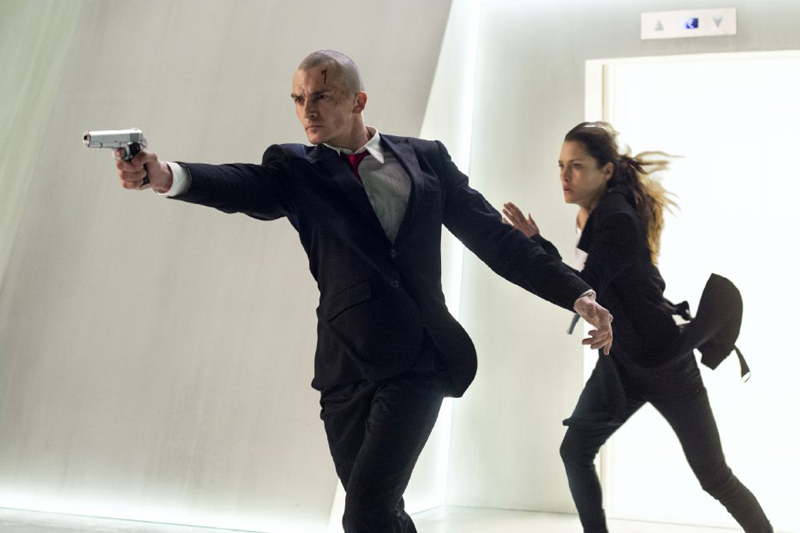 Flashes of Katia wrestling with her unknown past, or of 47 wondering if he has enough emotional capacity to love, make it clear that director Aleksander Bach, and screenwriters Skip Woods (who also wrote 2007’s Hitman) and Michael Finch, have some desire to build a story that cares about the emotional depth and experiences of its characters. But, on the most basic level, there’s nothing that makes 47 interesting; he’s flawless in combat, has no opinions about anything, and no apparent motivation or personality. The traits that make him a good video game character (i.e. an avatar for a human player) are exactly what make him boring in a movie.

Agent 47‘s attempts at characterisation are hindered by the fact such scenes come at a very slow pace in a film that does everything else so quickly. It’s jarring. And these moments aren’t crafted or performed well enough to leave much of an impression. With a couple of rewrites, this may have been the film it would like to be, but what we’ve got is too underdeveloped to be anything other than be forgotten once audiences exit the cinema.

This isn’t without merit entirely, though, and as long as Pixels is still showing it’s far from the worst thing you can see in cinemas at the moment. There are some moments that are genuinely impressive: like when a speeding car is stopped in its tracks by harpoons shot from skyscrapers. And it can be quite inventive at times, revealing itself to have a bit of a way with visual humour when it comes to showing how an agent can outrun and outmanoeuvre their opponents. Sometimes this is explained in ludicrous ways, but when the film is having fun and not taking itself too seriously, it can be enjoyable.

Go in with low expectations, then, and you’ll find that Hitman: Agent 47 might just be able to exceed them. With Agent 47, you’re getting a very basic action thriller that you’ll forget about immediately, but that won’t take too much out of your day at its mercifully short running time of 1 hour 36 minutes. It’s a film with exposition-laden dialogue, a predictable structure and lifeless performances, making it yet another entry in the long list of failed video game adaptations.