The Sundance Film Festival has once again stirred up controversies with a shocking Michael Jackson documentary (Leaving Neverland) and Ted Bundy biopic (Extremely Wicked, Shockingly Evil and Vile) both making headlines. Aside from those, it was a relatively safe year with no walkouts and very few divisive screenings. It was also a festival for women, with many of the festival’s buzziest films hailing from female directors.

Hollywood should take note because 45% of this year’s Sundance entries were from women. It was also the year that major studies showed an unexpected willingness to pay big money for small independent films, all of them hoping to find the next Lady Bird (2017) or Sorry to Bother You (2018). 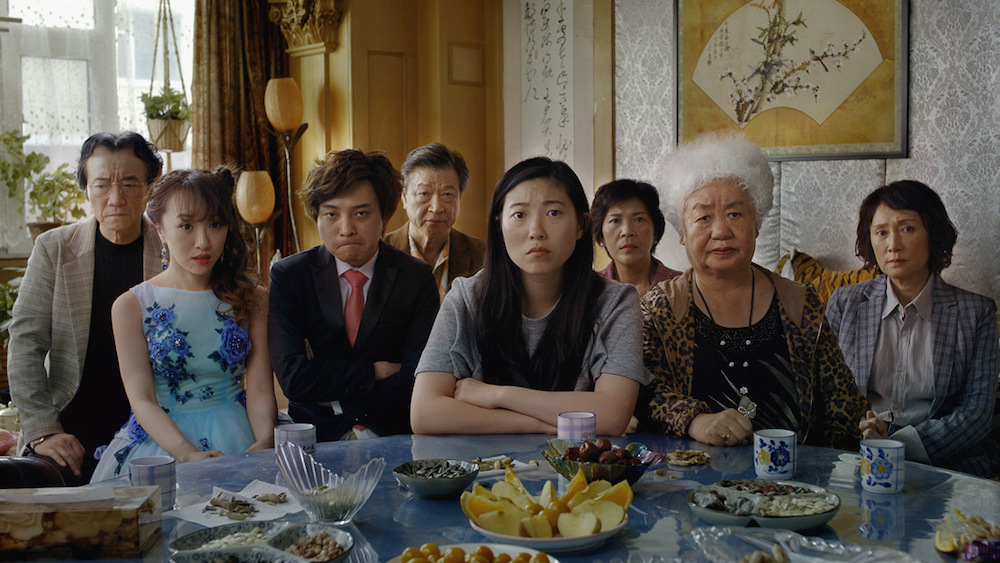 US rapper and actress Awkwafina is very talented but she was undoubtedly wasted in Crazy Rich Asians and Oceans Eight last year. Lulu Wang’s directorial debut The Farewell is a universal tale of love and loss, set around a Chinese-American family, and may finally be the star-making movie project Awkwafina deserves.

Awkwafina plays Billi, a New Yorker living with her nuclear family whilst her extended family stayed behind in China. When her grandma (Shuzhen Zhou) is diagnosed with terminal cancer, the family decide to keep the news from her so their matriarch can live out her final days in peace. So the family instead organise a fake wedding for one of Billi’s cousins, just so they have an excuse to gather together once more.

Wang’s script has been praised for its sympathetic approach to Chinese culture and its critique of the public attitude towards mourning. The Farewell is laugh-out-loud funny, heartfelt, and understands the nuances of families. 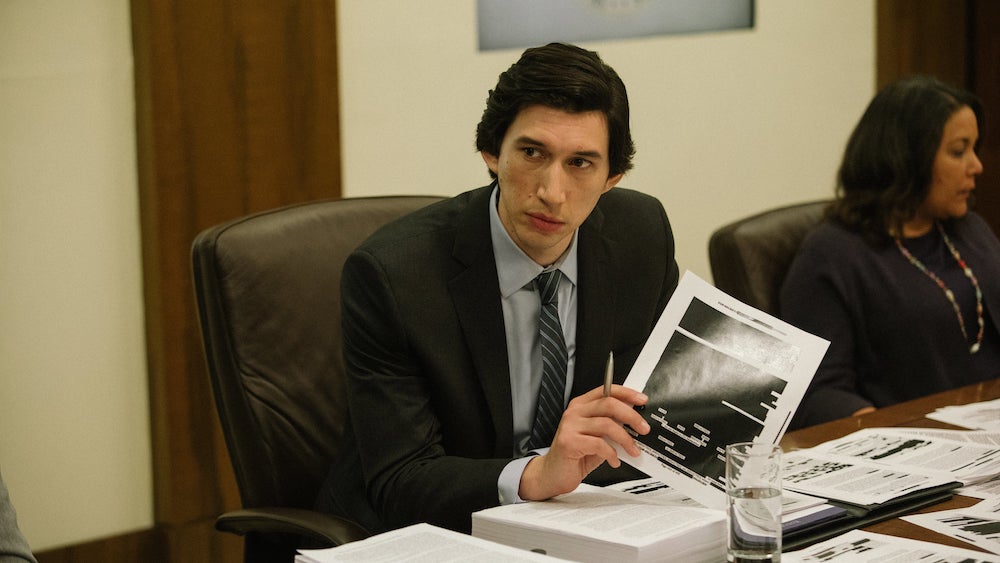 On paper, The Report should be an exhaustive retelling of the investigation into the CIA’s post 9/11 interrogation practices, but it instead offers a smart debate on government methods.

Writer-director Scott Z. Burns (a regular collaborator of Steven Soderbergh) restricts the narrative so it focuses on a Senate staffer (Adam Driver) tasked with compiling a report on the CIA interrogations with terror suspects. Dealing with Senator Dianne Feinstein (Annette Bening), he has to deal with millions of documents filled with discrepancies and descriptions of extreme brutality.

Compared to The Post (2017) and Spotlight (2015), this is a tightly scripted film that manages to grip audiences with the sometimes dense quantity of information offered and superb performances from Jon Hamm, Maura Tierney, Corey Stoll, and Michael C. Hall. 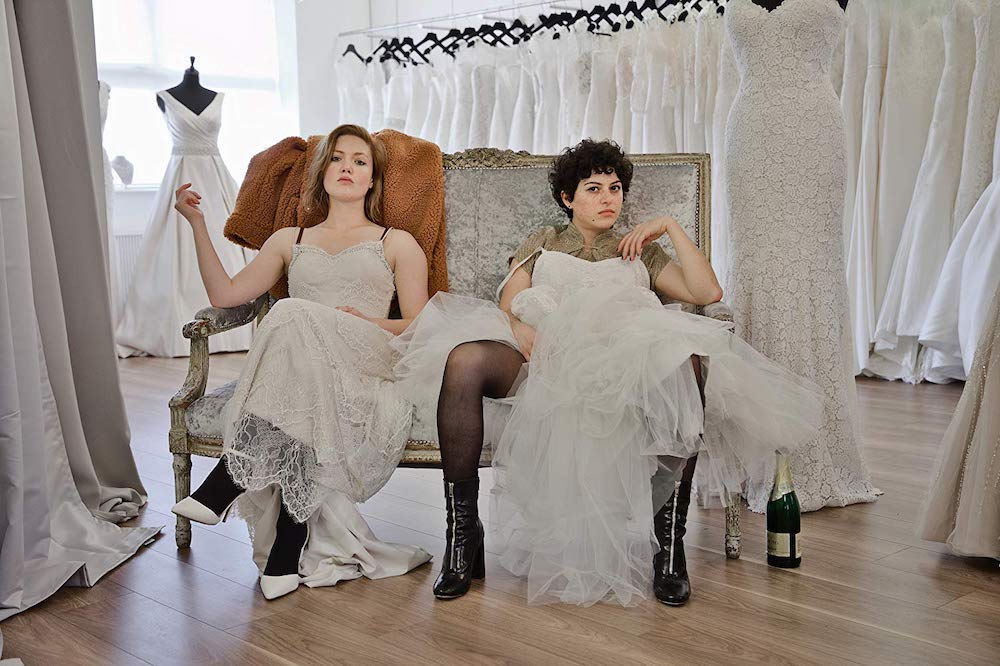 A film about two best friends facing conflict when one gets engaged may sound predictable but Animals manages to bring a fresh take on an old idea. Written by Emma Jane Unsworth, based on her book, this movie details an untamed relationship between two women who refuse to play by the rules.

Laura (Holliday Grainger) and Tyler (Alia Shawkat) share an intense co-dependency as they snort and drink their way through Dublin. These women echo the leads of Fleabag, Broad City, and Bridesmaids (2012), are they’re similarly jarring and wild, with no clear redeeming features. Animals doesn’t take the obvious path of explaining a new relationship but instead asks how to hold onto old ones and how complex friendships between women can be.

The second narrative feature from Sophie Hyde (52 Tuesdays), Animals doesn’t care if you dislike these women and it’s not interested in making their lives seem charming. Despite mixed reviews, many people will hold these characters close to their hearts, finding something in the decrying of conventionality that speaks to them personally. 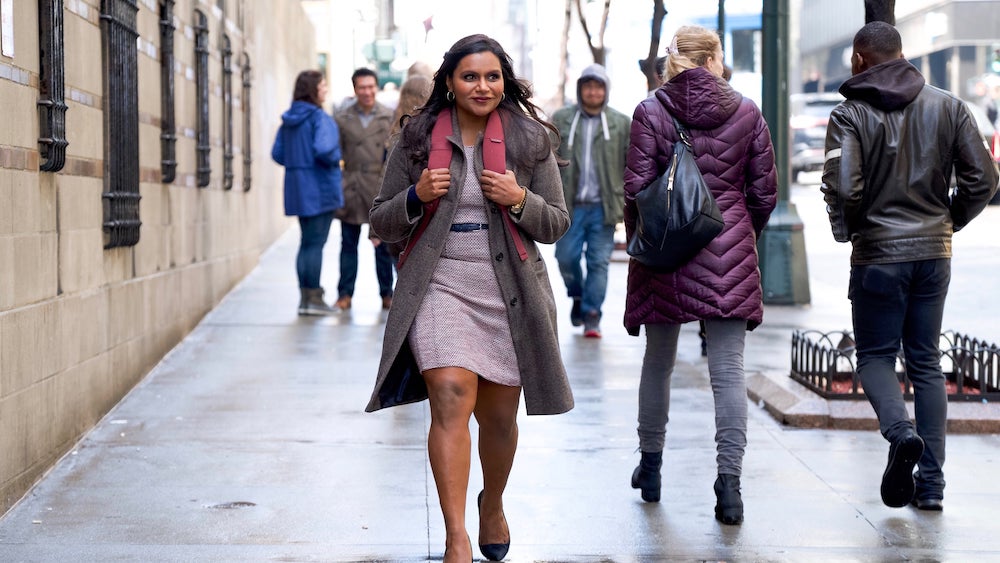 Transparent and Brooklyn Nine-Nine director Nisha Ganatra teams up with The Office star Mindy Kaling for a comedy that taps into that rarest of breeds: a female standup comedian. Picked up by Amazon Studios for a record-breaking $13M, Mindy Kaling plays a chemical plant worker called Molly who’s desperate to break into the comedy biz. In her efforts, she crosses paths with Katharine Newbury (Emma Thompson), a self-professed feminist and late-night talk show host who relies on all-male writer room to craft pro-female quips. Newbury hires Molly, almost out of spite, after she’s called out for not enjoying working with women.

Described as The Devil Wears Prada for the comedy world, with Thompson excelling as a boss-from-hell type who thrive in an environment of testosterone, Late Night is one of those hard-to-dislike comedies that is elevated by its strong lead performances and illuminating insight into the world of comedy writing. 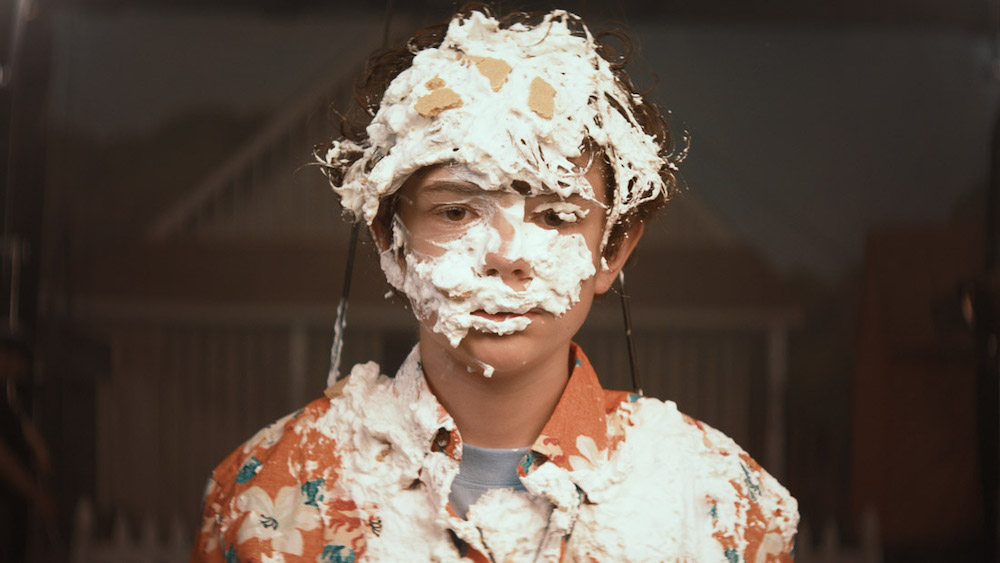 Shia LaBeouf has become just as famous for his off-screen antics lately, and this film feels like an extension of his recent forays into performance art (which includes walking around with a paper bag on his head and recording himself watching his own movies at the cinema). Honey Boy, written by LaBeouf, is based on his own experiences as a child star, where he plays a fictionalised version of his own father. The film frequently plays like a meta-take on a therapy session.

Most of the narrative takes places in 1995 when 12-year-old Otis (A Quiet Place’s Noah Jupe) is making twee Disney channel films. After the cameras are turned off, he goes home to a run-down one-bedroom motel room where his ex-felon father abuses him.

Director Alma Har’el (in her first narrative feature debut) frequently blurs the lines between reality and dreams, the present and the past and money and affection. Honey Boy is an honest window into a flawed actor’s soul, allowing him to poke fun at the industry and those stage parents who live through their child’s glory. 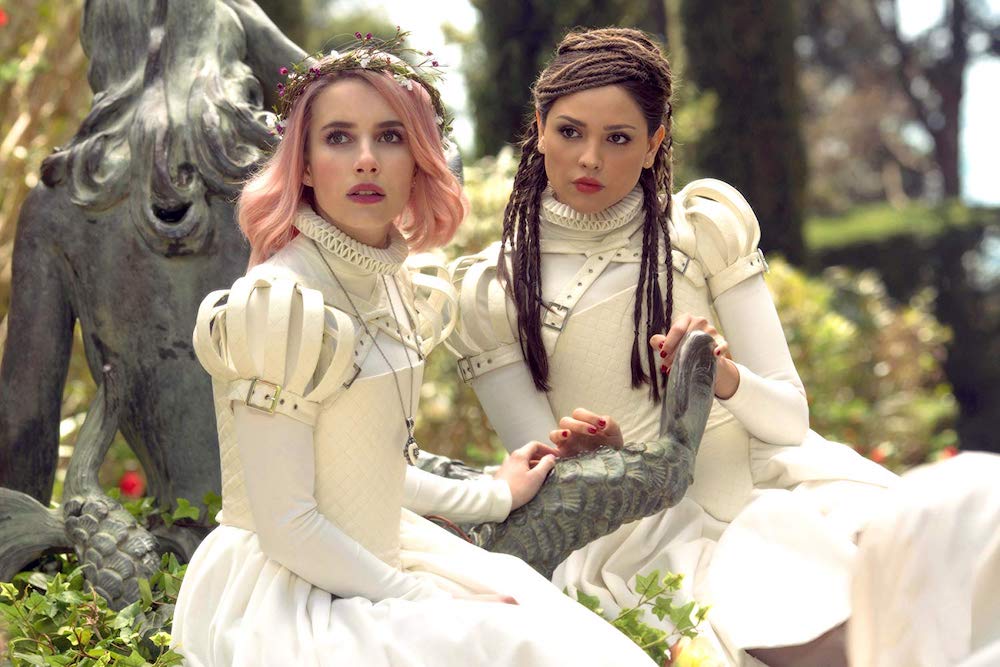 Spanish director Alice Waddington (Disco Inferno) offers a candy-coloured fairy tale with sci-fi undertones. Emma Roberts plays a woman who’s been captured and trapped on an island-based improvement facility. This prison-like finishing school for young women (who include Awkwafina and Eiza González) is overseen by a matriarchal Duchess (Milla Jovovich) and teaches girls to stay slim, practice yoga, and brainwash themselves into being beautiful.

This movie’s been praised for its incredible production design and sensuous cinematography hailed as “Barbarella meets The Handmaid’s Tale“. This feminist science fiction turns feminine archetypes on its head and puts women in charge of their own destinies. 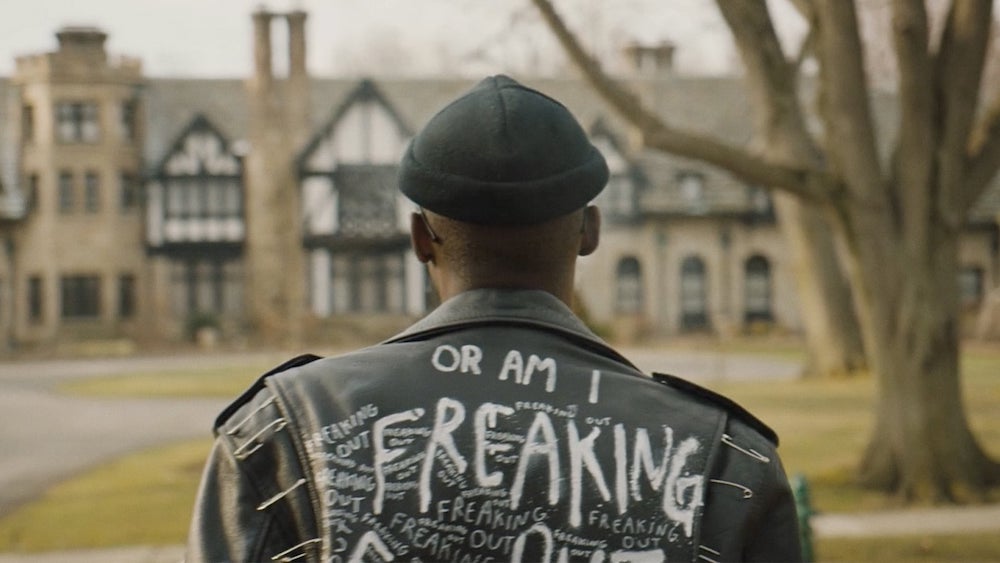 Bigger ‘Big’ Thomas (Moonlight’s Ashton Sanders) defies every black stereotype cinema has given us, as he walks around Chicago with green hair listening to punk music and fighting for the American Dream. He’s an unusual character filled with ambitions, determined not to follow his peers into a life of crime. Big’s offered employment by a local rich family which leads to him making friends with their wayward daughter Mary (Margaret Qualley), who is desperate to integrate him into her champagne socialism life… but the end results are horrifying. Very few film releases have understood white privilege as well as Native Son does.

Based on Richard Jones’s controversial novel and adapted by Pulitzer-winning playwright Suzan-Lori Parks, Big’s rage makes for poetic and provocative viewing. Native Son represents the alienation many of us feel and is a poignant portrayal of a black man running out of options. 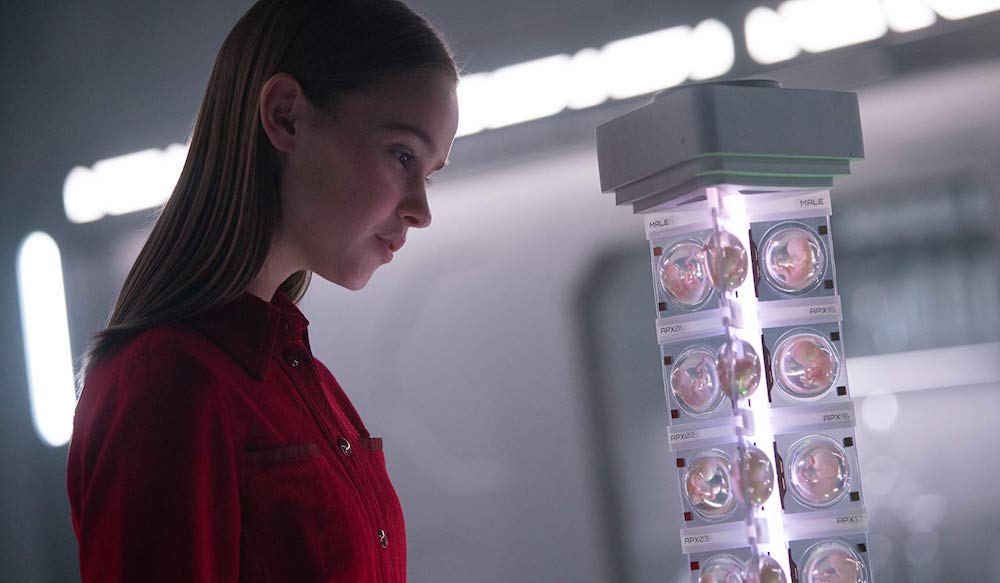 A young girl (Clara Rugaard) raised in a bunker by a robot she refers to as ‘Mother ‘(voiced by Rose Byrne), believes the outside world is contaminated and desolate, but when an injured woman (Hilary Swank) arrives at her door the girl must reassess everything she thinks she knows about her existence.

Grant Sputore’s debut isn’t very original but it’s somehow of the freshest scripts (Michael Lloyd Green) at this year’s Sundance. I Am Mother contains appealing apocalyptical imagery and incredible world-building, with the Mother robot character being hailed as cinematically important as HAL 9000. This is a film that isn’t afraid to have big ideas and it isn’t scared to wear a ‘the future is female’ badge with pride. 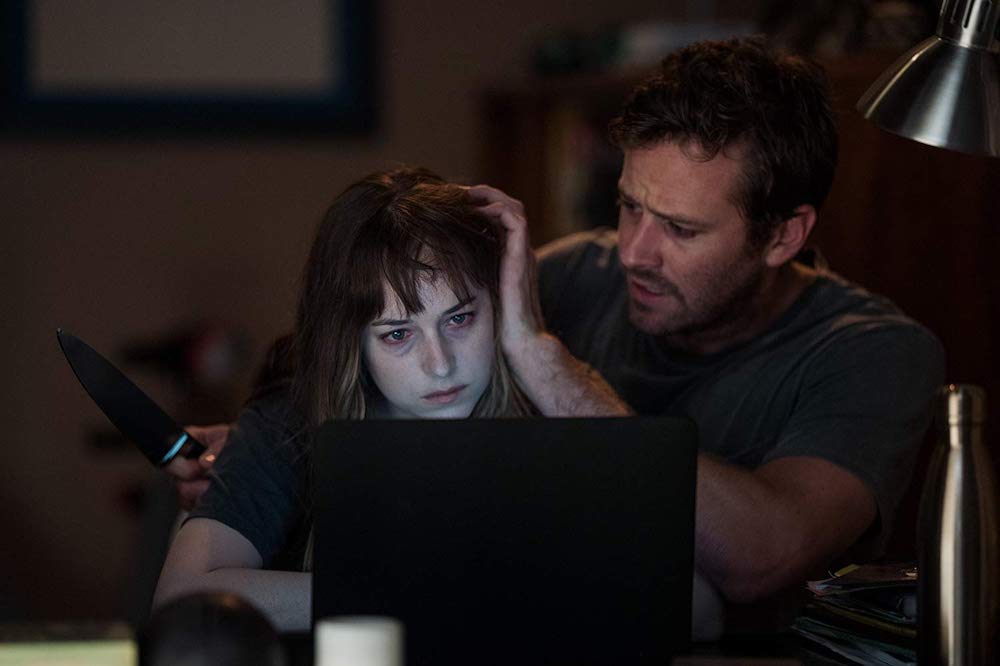 Armie Hammer headlines this unnerving and gruesome horror story. He plays a New Orleans bartender who has a toxic relationship with his girlfriend (Dakota Johnson) and still pines for his ex (Deadpool 2′s Zazie Beetz). His life changes when he finds a lost cell phone that holds horrific content and triggers a supernatural happening. The narrative soon enters a Lovecraftian world where Hammer is tormented by constant calls and text messages from college kids who seemingly left the phone behind for a purpose.

Described as the grossest horror movie of the year, Babak Anvari’s (Under The Shadow) movie hasn’t been universally feted. It doesn’t bring the genre up to the levels of Hereditary (2018) or A Quiet Place (2018), but it does have plenty of decapitated bodies and cockroaches. 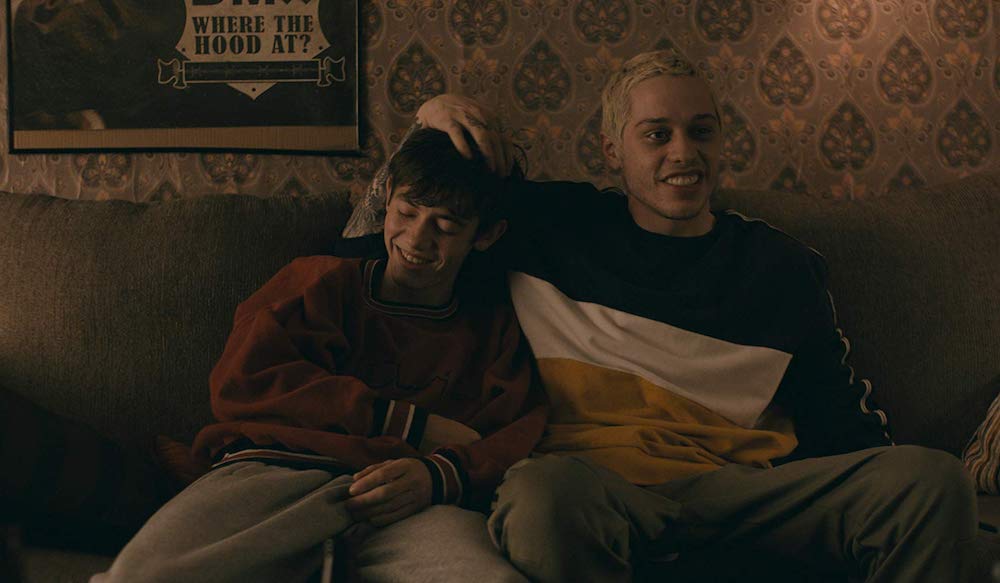 Sundance has bred some fantastic coming of age comedies over the years but, in Big Time Adolescence, the genre gets an adult makeover. Zeke (Saturday Night Live’s Pete Davidson) is a loveable loser, idolised by his ex-girlfriend’s teenage brother Monroe (American Vandal’s Griffin Gluck). Davidson reminds you of every high school slacker who was so cool in the isolation of small towns yet never made it beyond being a stoner.

This film consists of the pair hanging out at Zeke’s clubhouse with his other millennial friends (which includes actor-rapper Machine Gun Kelly) where they get high and play video games. Monroe’s family (including his ad-exec father Jon Cryer) are right to be worried, as Zeke’s advice about selling drugs and getting tattoos at home is terrible.

First-time writer-director Jason Orley proves himself one of the freshest new voices on the indie scene. This comedy toes the line between Jackass-style crassness and the sweetness of ’80s John Hughes. Every generation needs their own Fast Times at Ridgemont High (1982) and Big Time Adolescence could just be it.