After last week’s comforting throwback “New Eden“, Star Trek: Discovery was back to its choppier self with “Point of Light”, lacking narrative focus and essentially wanted to dump information across three subplots jostling for attention. Perhaps most disappointingly, Ensign Tilly’s (Mary Wiseman) hallucination of a dead friend she barely knew as a teenager, Amy (Bahia Watson), was resolved no sooner had it begun.

Maybe that’s for the best because Amy was intensely irritating. This subplot only seemed to exist so Tilly could go through the cliched routine of behaving bizarrely around others, afraid to admit she’s seeing “a ghost” in case everyone thinks she’s crazy. By the end of the episode, Amy had been hurriedly explained away as a Mirror Universe spore that attached itself to Tilly and grew inside her body… but I’m still nonplussed. These “spores” seem to have a wide variety of purposes, there to suit whatever the show requires each week—be that instantaneous teleportation through a mycelial network or being haunted by a passive-aggressive schoolfriend. 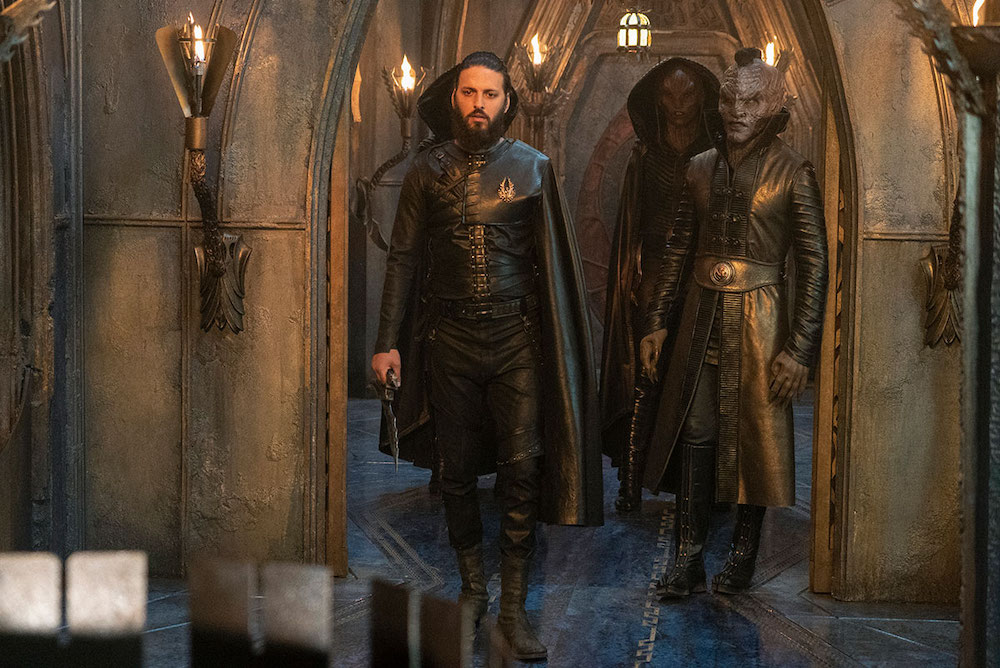 We also got some movement with Spock’s absence, whom we learn escaped from Starbase 5’s psychiatric ward and is now a fugitive from the Federation. Considering “New Eden” revealed Spock had voluntarily committed himself to the funny farm, this felt odd. But the real intention of this subplot was to properly introduce Amanda (Mia Kirshner), Spock’s human mother and Michael’s (Sonequa Martin-Green) adopted mother, who beamed aboard the USS Discovery to help unseal her son’s medical records. And, once done, it seems Spock was suffering from “extreme empathy deficits” and kept drawing the ‘Red Angel’ figure Michael saw on the asteroid, which seems to be tied into the seven red signals that have appeared across the galaxy.

It was interesting to get insight into Amanda and Michael’s family relationship, learning how she denied Spock the emotional support she instead focuses onto Michael (as a fellow human being), but I still don’t like the constant reminder of how Discovery has upended what we thought we knew about Spock. It just seems ridiculous that Spock (the Leonard Nimoy future incarnation) had an adopted human sister but never mentioned it, even if the show could theoretically reveal why Michael’s existence was a “secret”. I’d rather Michael Burnham has been raised by a different Vulcan family (or even Tuvok’s family from Star Trek: Voyager), as we’d still be able to tackle a lot of the interesting questions that raises, but without treading over things that feel sacrosanct. 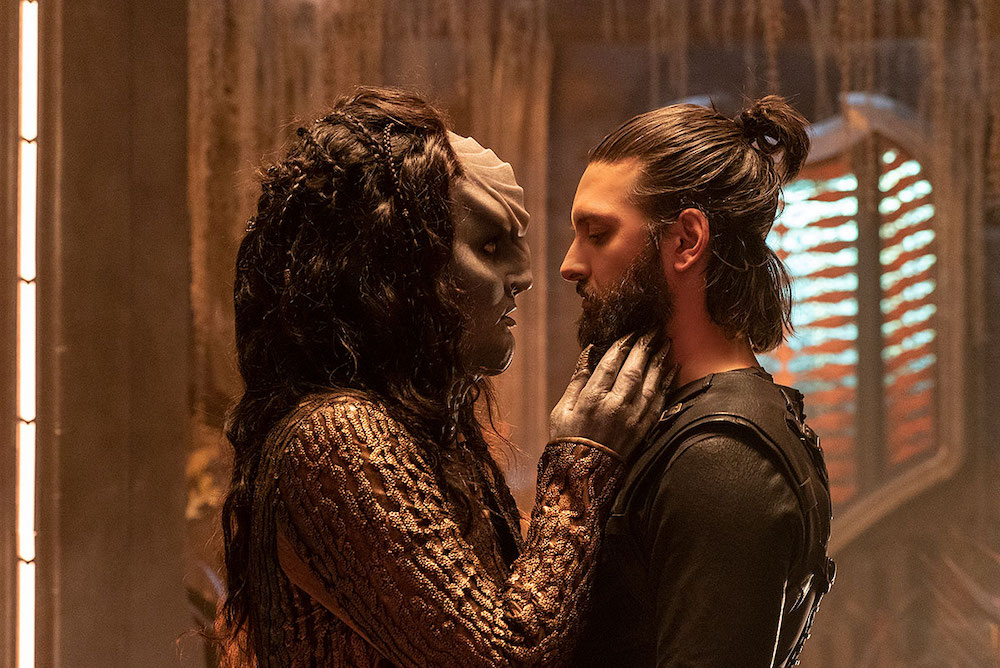 The third subplot was the most entertaining and important to the ongoing season’s concerns, it seems, although it came with its own problems. L’Rell (Mary Chieffo) is the new Klingon Chancellor, doing her best to keep the reunified Houses of the Empire together and start mass-manufacturing the familiar green D7-class Klingon Battlecruisers from The Original Series and movies. But there are still many people who don’t agree with her reign and, in particular, her favouring of Lt. Ash Tyler (Shazad Latif)—a.ka. Voq, the albino Klingon ‘Torchbearer’ whose body was transformed into a human and merged with Ash’s identity. (It still gives me a terrible headache trying to parse exactly what happened there, sorry! What do Ash’s family have to say about this turn of events?)

The upshot is that L’Rell still has rivals and being in love with a human-looking boyfriend, who acts as her counsel, isn’t helping matters. Even if he’s made an effort by growing a beard and opting for a topknot – evoking Japanese samurai, no? There’s an amusing line when Ash contacts Burnham about how Klingons have started regrowing their hair, post-war, to explain why Discovery’s producers have backtracked on their Klingon redesign. Here, many of them have long manes of hair and droopy moustaches—as nature intended. 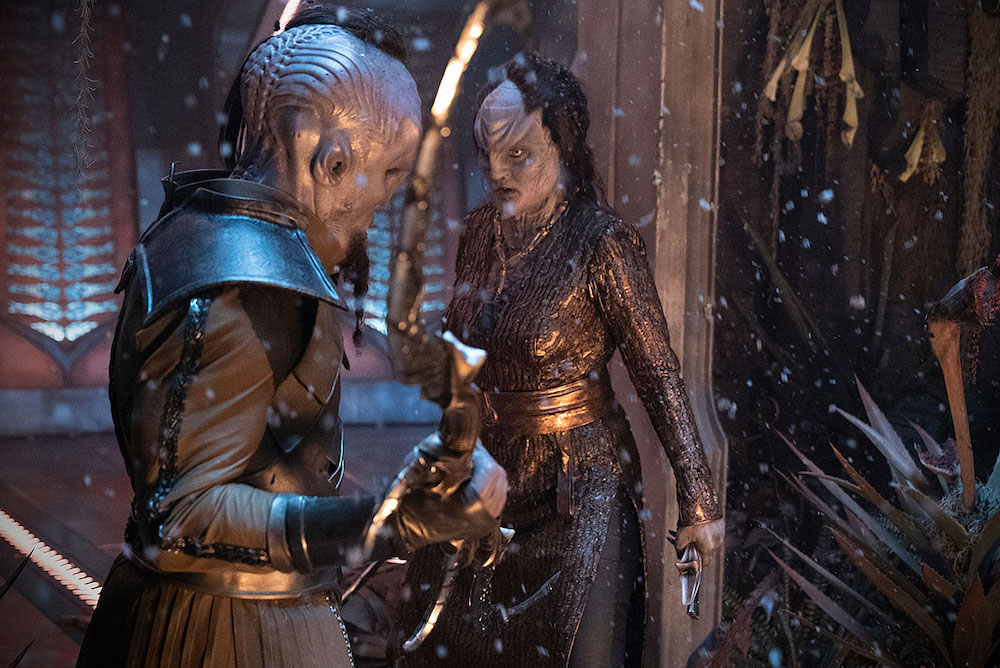 The Klingon political machinations fueled almost half the story last season, but we seem to be moving away from them now. Instead, things took a more dramatic turn with the reveal L’Rell gave birth to Voq’s full-blooded Klingon son and has been keeping the child a secret from him ever since. This proved invaluable intel for L’Rell’s archenemy, House of Kol patriarch Kol-Sha (Kenneth Mitchell), who stole the baby and threatened its life to force L’Rell into quitting as Chancellor. A sick plan that almost worked, until a mysterious figure materialised and slaughtered L’Rell’s political foes using high-tech weapons (loving that ‘bubble gun’). L’Rell and Ash’s saviour was revealed to be Philippa Georgiou (Michelle Yeoh), the evil Emperor from the Mirror Universe, now working for the black-ops organisation “Section 31” (a covert cell of the Federation introduced in Star Trek: Deep Space Nine).

The conclusion of this subplot spins things in an intriguing new direction. L’Rell decides to fake her child and lover’s murder while denouncing Voq as a traitor, and consolidates her ebbing power by asking her people to henceforth refer to her as “Mother” instead of “Chancellor”. Last season, the influence of Game of Thrones was clear when it came to the Klingon storylines, and that continued throughout “Point of Light”. It just didn’t work as well as it could have, due to how rushed things felt. Couldn’t we have had a few episodes to acclimate to L’Rell and Voq’s shaky authority on Q’onoS? Why was the fact L’Rell could destroy the Klingon homeworld if anyone disobeys her not mentioned? (She has the detonator to a bomb dropped into the centre of the planet literally four episodes ago.) 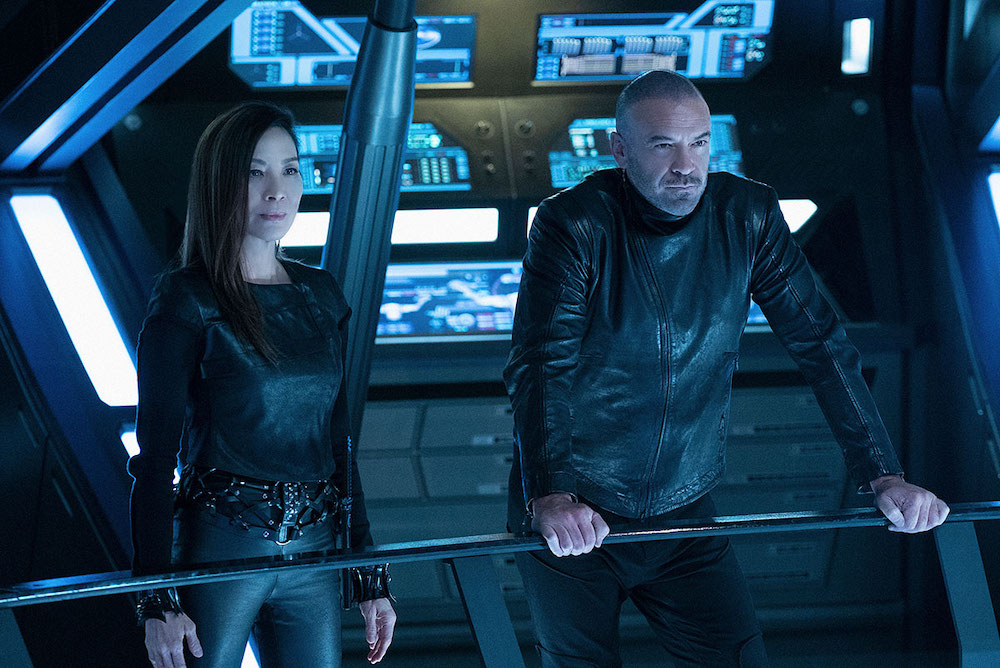 The reveal of a baby felt unearned, too. And considering the child has already been given away to devout followers of Kahless… it was of no real relevance beyond manufacturing some easy drama here. They can’t even return to it later without a time jump allowing the baby to reach adolescence and perhaps come looking for its real parents. Ultimately, it felt like an unsatisfying and messy way to undo aspects of how season 1 ended. So now we have L’Rell reinterpreted as a ruthless leader of more loyal Klingons and Ash aboard a secret starship with Georgiou. Knowing that CBS has commissioned a new spin-off for Michelle Yeoh’s character, I wonder if Discovery is going to be something of a backdoor pilot for that series this year—similarly to how Arrow provided a soft-launch for The Flash in its third season.

“Point of Light” was the least interesting episode of season 2, so far, as it didn’t feel like it had much cohesion across its hour. A lot of the positivity surrounding the seven signals mystery last week was undone again, and the fact Spock feels so prominent without even having appeared on the show yet makes me worried. But there were some intriguing steps taken with the Klingon third of the episode, to course correct a few decisions the writers seem to regret about where last season ended. It just wasn’t very smoothly handled and, frankly, I think it deserves a few episodes to unfold more naturally instead of rattling through everything so fast.