Written and directed by US rapper, producer, screenwriter, activist, and first-time filmmaker Boots Riley, Sorry to Bother You is a gonzo satire with a fascinating undertone. Made on a small budget of $3.2M, it’s Riley’s contorted commentary on the social status of the USA; capitalism, telemarketing, racism, and much more. If you were to substitute Jordan Peele for Boots Riley, you’re on the right wavelength of what to expect with this movie. Generously described as this year’s Get Out (2017), it’s a smart genre-blending mix of comedy, drama, and eventually horror. At its core, Sorry to Bother You is a subversive take on the black experience in America but, at the last second, things take an interesting turn.

Set in Oakland, California, Cassius Green (Lakeith Stanfield) is living out of his uncle’s garage with his performance artist girlfriend, Detroit (Tessa Thompson). As things are looking bad for them, financially, everything starts to change after Cassius lands a job working as a telemarketer for a company called ‘RegalView’. Selling encyclopaedias—or the equivalent—over the phone, Cassius doesn’t know a thing about telemarketing, but luckily his colleague Langston (Danny Glover) gives him some helpful advice: in order to become a successful salesman and please his boss, he’ll have to adopt a “white man’s voice” on the phone. Soon, Cassius has become the firm’s greatest telemarketer and starts to climb the ranks to “Power Caller”. 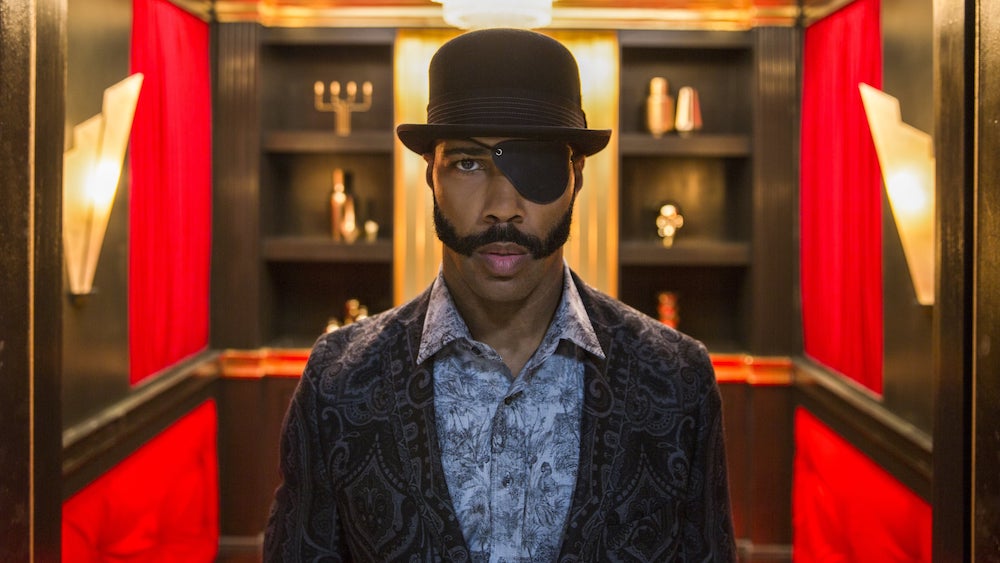 Riley’s cast is more than up to the task of balancing the director’s absurd comedy and its serious undertone. Lekeith Stanfield has quickly established himself as one of the most interesting actors of his generation, too. Having played Snoop Dogg in Straight Outta Compton (2015) and more recently featuring in Get Out and TV’s Atlanta, Cassius “Cash” Green is a totally different kind of character. Stanfield manages to keep the outlandish plot grounded with a naturalistic performance of a young man wondering what to do with his life. As the narrative becomes increasingly surrealistic, Stanfield injects a sympathetic integrity to Cash as he transforms from a slacker to a sellout to a revolutionary.

Playing Cash’s girlfriend is the delightful Thompson (Creed), who not only serves as Cassius’s conscience on his shoulder but conveys the film’s moral message about the death grip large corporations have on society. Thompson makes Detroit much more than a “preachy girlfriend” and adds welcome depth to her character. (Also keep an eye out for a reoccurring gag about flamboyant earrings featuring radical slogans.) 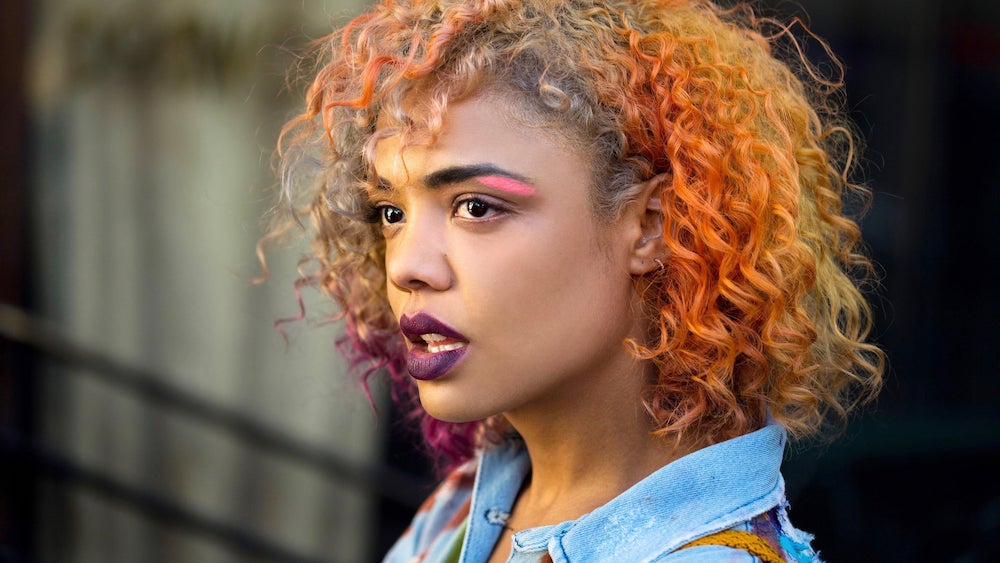 The brashness and stylisation of Sorry to Bother You has similarities to the work of Spike Lee; specifically his latest picture Blackkklansman (2018) about a black cop impersonating a white man over the telephone to infiltrate the Ku Klux Klan. In the world of marketing, the imposture of voice is very important and the illusion of a white man can give black workers a whole new opportunity in telesales. Comics such as Richard Pryor and Eddie Murphy performed famous material satirising the “white man’s voice” and its sincerity. It’s only when mocked that the particular idiomatic style seems obvious to white men.

However, from a different perspective, it’s treated with the same satiric tactlessness as when a white lady in Airplane! (1980) helps the flight attendant speak “jive” to understand all the black passengers. The white voice in Sorry to Bother You is more surreal than this and, instead of Stanfield doing an impression, he’s dubbed hilariously by white comic actor David Cross (Arrested Development). Cassius’ enigmatic boss Mr Blank (his surname literally beeped over to give the impression he’s the man who shan’t be named nor sell your soul to), played by Omari Hardwick (Power), is also dubbed over by comedian Patton Oswalt (Ratatouille). Even Detroit’s voice is dubbed by English actress Lilly James (Baby Driver) during her modern art piece. 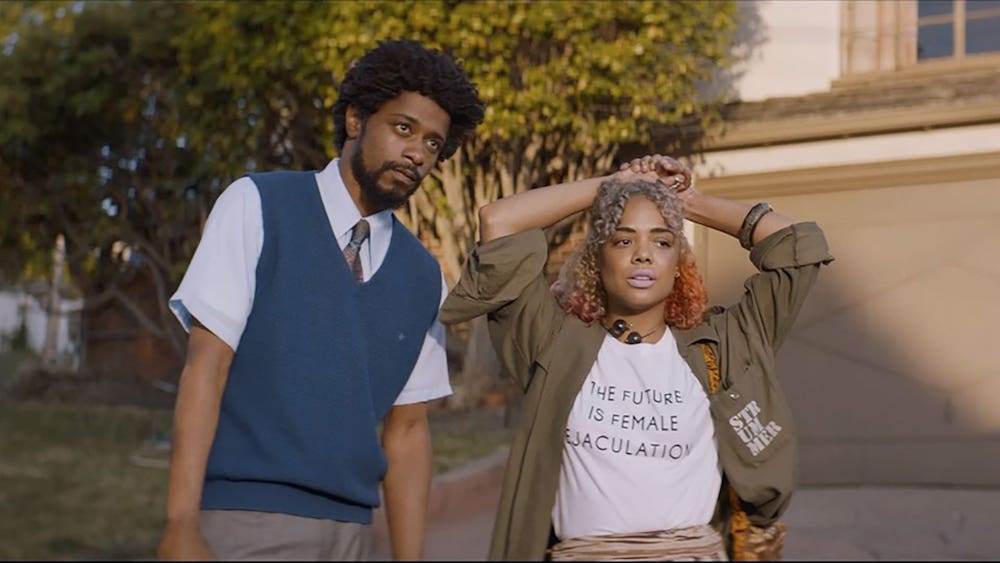 Sorry to Bother You is a whip-smart satire of racial equality and the dynamics of the modern workplace, but underneath its hilarity is a fascinating exploration of black identity and its suppression. Ultimately, the movie’ a realistic perception of 21st-century capitalism—portraying people giving up their lives and their freedom so they don’t have to worry about money. Here, Riley educates his audience about the ‘Worry Free Corporation’ through a series of TV commercials. We learn how the people who signed up to this corporation are essentially slaves to the wage, living in glamourised prison cells/factories in exchange for a free meal and housing. This isn’t Riley’s strongest directorial move as it often takes you from the reality of modern-day Oakland he’s spent the first two acts constructing, to a half-baked dystopian science-fiction… resulting in a lack of cohesion between the visual styles. However, it’s an interesting idea firmly rooted in reality. Many of us feel trapped in a working prison, never getting ahead and only every feeling like a cog in the machine. 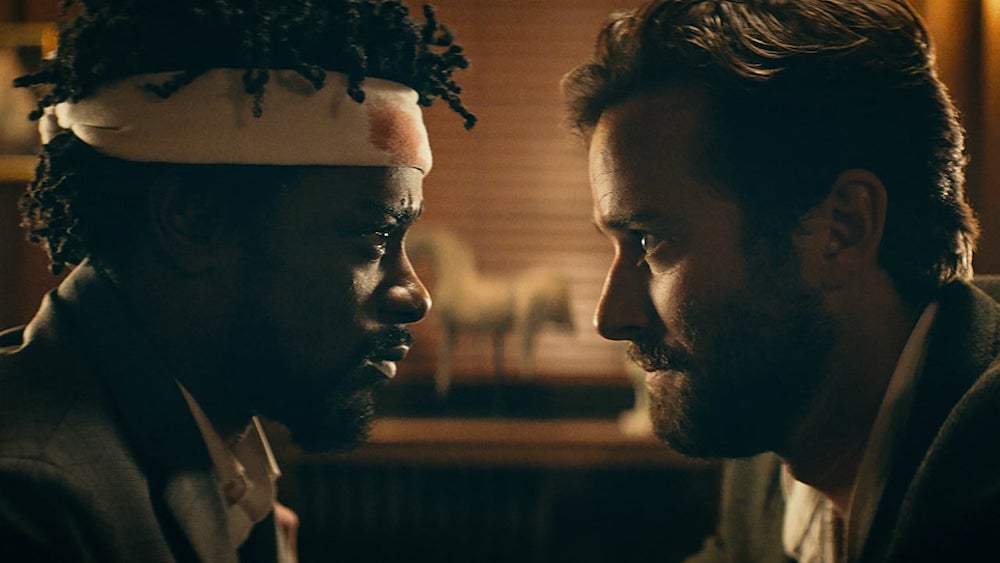 However, Riley’s creativity for scenes can’t be disregarded because they’re so cinematically striking, especially for a debut. Everything, from the costume design to his visual imagination—such as when Cassius makes a call and his desk drops into the home of whomever he’s dialled, or when Cassius and Detroit’s garage apartment literally transforms before our eyes as Cassius makes more money.

It’s much harder to make people laugh and think at the same time, and it’s that ingenious balance that makes Riley’s script for Sorry to Bother You stand out from the crowd. Although it spirals out of control during the third act, everything up until that point is a solid debut. It never loses sight of its need to entertain while serving as a wake-up call for audiences. It’s low budget, weird, genre-defying, and will resonate with younger audience busting their hump at a miserable job. It also hopefully serves as Boots Riley’s calling card for bigger films.