George A. Romero perfected the zombie genre. His classics Dawn of the Dead (1978) and Day of the Dead (1985) remain two of my favourites. Their horrific gore and underlining social commentaries influenced many other directors to tackle the zombie genre with a personal twist—most notably Edgar Wright’s Shaun of the Dead (2004). Breaking the zombie formula with its unorthodox style and the comedy pairing of Simon Pegg and Nick Frost, Shaun’s success and international cult status encourages Sony Pictures released to make their own ‘zom-com’: Zombieland (2009).

Before finding commercial success with 30 Minutes or Less (2011) and Gangster Squad (2013), Zombieland was Ruben Fleischer directorial debut. With the relatively unknown (at the time) leads of Emma Stone (Superbad) and Jesse Eisenberg (Adventureland), it wasn’t on the mainstreaem’s radar upon release. However, it grossed over $102M worldwide from a relatively small $24M budget and helped catapult Stone and Eisenberg to fame. Fans like myself were begging for a sequel and now, almost 10 years since the release of the original, the gang are back together for Zombieland: Double Tap.

After a decade of surviving in a post-apocalyptic zombie-infested America, Tallahassee (Woody Harrelson), Columbus (Jesse Eisenberg), Wichita (Emma Stone), and Little Rock (Abigail Breslin) decide to settle down inside the abandoned White House. Soon after, tired of being treated as a child by the rest of the group, Little Rock runs away after falling for a hippy called Berkley (Avan Jogia). And so, determined to find her runaway sister, Wichita sets off in search. After meeting another survivor, Valley Girl Madison (Zoey Deutch), Tallahassee and Columbus set off on Wichita’s trail. All the while fighting their way through smarter and more evolved hordes of zombies they’d previously encountered. 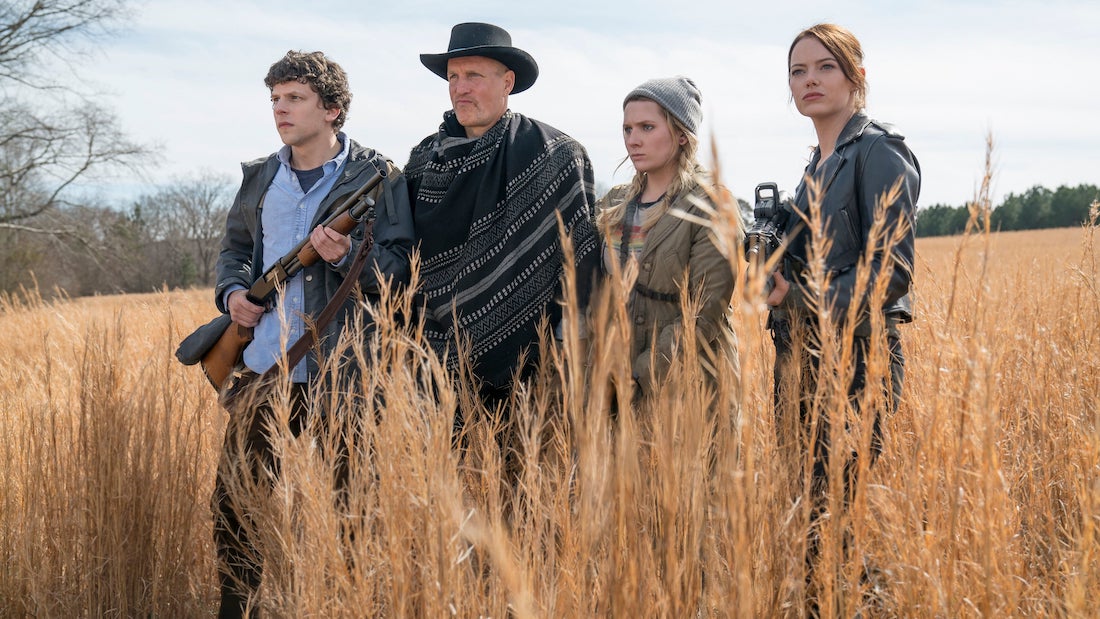 The cast continues to be a riot. Their wonderful chemistry is amplified with the addition of new characters. On paper, one may think the ‘dumb blonde’ character in 2019 might be too much of a trope, but you’re dead wrong. The first memorable performance of Zoey Deutch I saw was in Everybody Wants Some!! (2016) and she’s equally impressive here as ditzy Madison. Stealing every scene, Madison’s similar to Reese Witherspoon In Legally Blonde (2001) and Marilyn Monroe in Gentleman Prefer Blondes (1953). Her character is often ridiculed by the way she talks and behaves, but when the occasion arises she often outwits the others. Deutch’s comic timing and physicality deliver some of the biggest laughs of the movie, and Maddison adds a new element to the returning foursome. Her presence also adds interesting tension as Wichita finds her ex infatuated with this new woman.

While their roles aren’t quite as big, the other new cast members are equally wonderful. Rosario Dawson channels her Sin City (2005) experience as hard-as-nails Nevada. Fitting in naturally, she’s the owner of an Elvis-themed motel that could easily pass as Graceland 2.0. Portrayed as the mirror image of Tallahassee, her character’s just as aggressive and capable. Not only does she serve as a love interest, but it was a pleasant surprise to see a female character break gender stereotypes. Her empowered personality and ability to weld a revolver proves she can hold her own during a zombie apocalypse.

Luke Wilson (The Royal Tenenbaums) and Thomas Middleditch (Godzilla: King of the Monsters) play dopplegångers Albuquerque and Flagstaff. In an uncanny sequence, their appearance doesn’t play out as the trailers have you believe. Providing some surrealistic fun, they’re far more aggressive than their Tallahassee and Columbus counterparts. Besides a well-choreographed fight to the death, essentially their appearance feels a fun riff on Shaun of the Dead’s own “alternate characters” joke. Unfortunately, both actor’s potential is criminally underused. As enjoyable as their scenes are, I believe the picture would’ve been stronger if those two characters had larger roles. 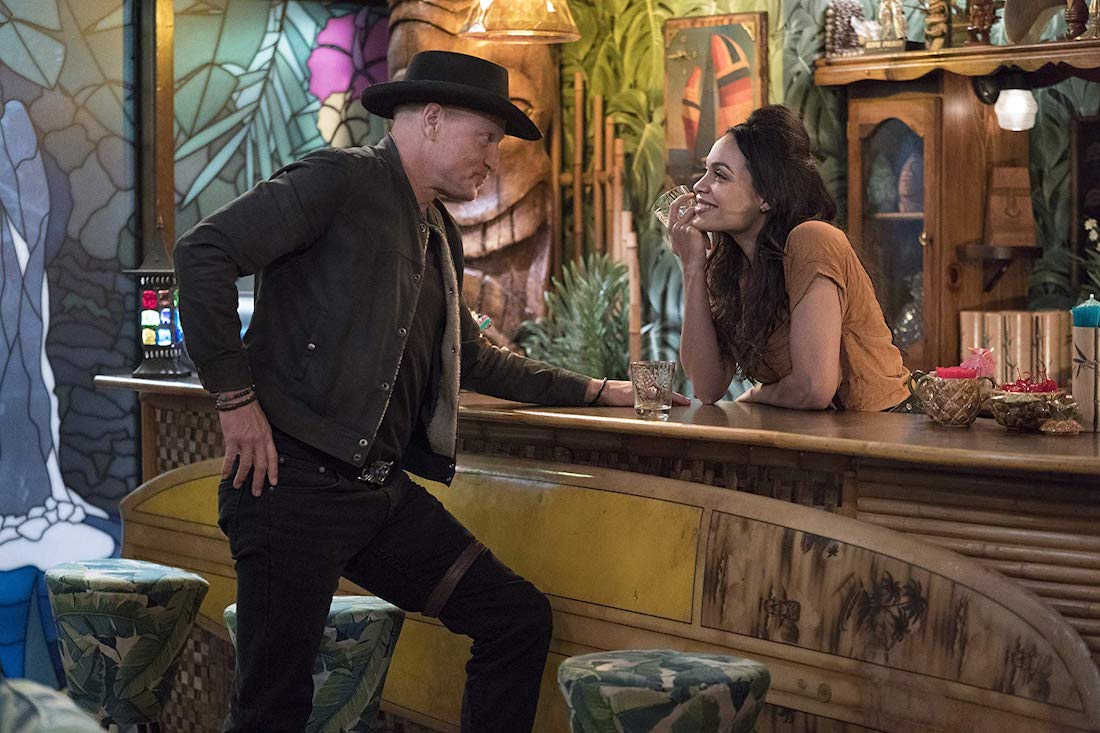 Having as much fun as the first time around, Woody Harrelson (Natural Born Killers) is in full Kurt Russell mode circa Escape From New York (1981) and the Twinkie lovin’ redneck Tallahassee. Harrelson’s characters all tend to come from the same gene pool, containing a southern drawl, laidback attitude and dimness. Although this time he adds an extra dimension to his character, as his clumsy attempt to be a father figure for Little Rock almost make his stereotypical post-apocalyptic character a fleshed-out human being.

Reprising his now-familiar ‘modern Woody Allen’ schtick, Jesse Eisenberg is the shy and neurotic yin to Harrelson’s yang. An unlikely survivor of the zombie apocalypse, he still abides by his own list of rules of survival (Rule 1: Cardio, Rule 2: Double Tap, etc…) The quick back and forth between himself and Tallahassee provide plenty of entertaining scenes. One, including a bottle of alcohol as they’re riding through an abandoned mall on Segways, harkens back to the original. Unfortunately, Emma Stone (La La Land) and Abigail Breslin (Little Miss Sunshine) roles leave much to be desired because they serve more as plot devices for the men. It would’ve been nice to see Stone act other than as a jealous ex-girlfriend, and for more depth to be given for Breslin’s rationale for her departure.

The greatest strength of Zombieland: Double Tap is how it feels like old friends reuniting. So natural is their chemistry, it never feels like these characters spent any time apart. A lot has changed in the last 10 years, including six Academy Award nominations and one win between the reunited cast, plus Breslin isn’t so little anymore as Little Rock. However, the return of each individual personality feels effortless. They’ve all matured and so has their level of comfortability together. 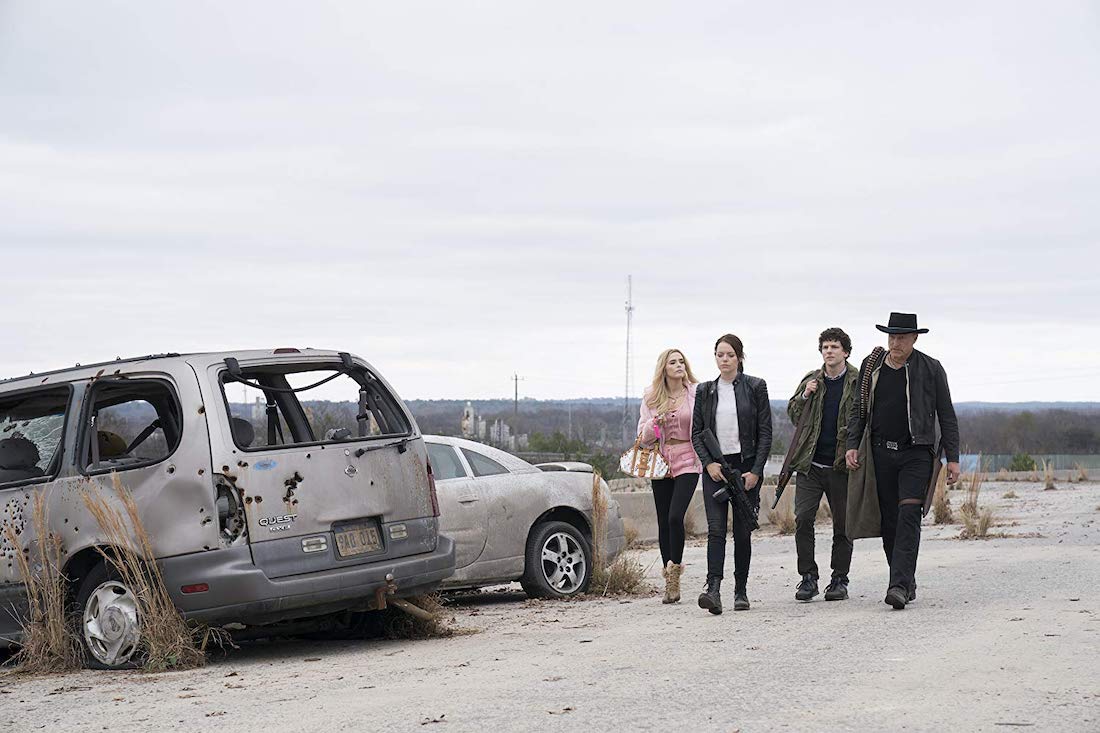 Returning to the director’s chair from the set of Venom (2018) is Ruben Fleischer. Unashamedly dialling up the cartoon violence and slapstick humour, he maintains the distinctive style of the ’09 movie. Fleischer finds the balance between humour and horror. Throwing in plenty of blood and gore, the filmmaker ensures you’re never far away from a good laugh. With the help of a substantially larger budget, he’s proved he’s a dab hand at orchestrating gigantic, more inventive action sequences—ith help from the excellent cinematography by Chung-hoon Chung (It). The opening scene features a hilarious slow-motion montage of death and dismemberment, as our two male leads tackle a heard of zombies outside the front lawn of the White House. While the staggering climax features enough flying limbs and zombie corpses to keep every gore-hound smiling.

Beyond the characters, humour, and gore, the absurd fun one would expect after seeing the original Zombieland remains. Over the years that we’ve been away from our characters, the zombies have evolved into different sub-species: the “Homers” (dumb), the “Hawkings (smart), and the “T-800s” (strong). Similar to 28 Days Later (2002), having a variety of zombie helps change the structure of fights. Along with making an interesting game for the characters known as “name that zombie game”. Additionally, the zombies are killed in many ways that add comedy. A personal highlight is an impressively choreographed single-take shot of a zombie fight that keeps all of the gore fresh and fun.

The comedy works best when its most self aware and fourth-wall-breaking. Opening with a voice-over from Columbus directly thanking the viewer whilst acknowledging that there are “many choices in zombie entertainment” is a humorous addition. Knowing when to point out the meta-comedy, writers Paul Wernick, Rhett Reese, and Dave Callaham also understand when to push the boundaries. The witty sight gag as Columbus reads an issue of The Walking Dead and stating its “terrifying, but unrealistic.” (Also, it’s worth staying behind for a hilarious mid-credits cameo.)

Upon viewing the trailer for Zombieland: Double Tap, I was apprehensive about it falling into the delayed sequel trap of Anchorman 2: The Legend Continues (2013) or Dumb and Dumber To (2014)—released too late and repeating the same jokes. However, it didn’t disappoint, even if the humour isn’t as deadpan or clever as Jim Jarmusch’s The Dead Don’t Die (2019) because it comes from the writers behind the Deadpool movies. It’s no surprise that the wit is sharp and filled with pop culture references, making it easier to digest.

Unfortunately, the script is not without its share of problems. The occasional moment crosses the fine line between what’s funny and cliché—such as the introduction to Little Rock’s new love interest Berkley. Appearing on-screen with the sound of sitar music, this ethnic character greets the audience with a cliched “Namaste”. Barely improving as the story progresses, the millennial hippie falls into every trope. His arc revolves around running away with Little Rock to a weapon-free commune known as Babylon whilst glorifying the use of cannabis. It’s unclear if this is the writer’s outdated depiction of millennials. Nevertheless, if it is, they need to view Booksmart (2019) to get a clearer idea of how the younger generation behaves.

Further, the progression of the narrative in the first act is sluggish. Columbus’s narration leads the way for the story. Along with the rules for survival frequently appearing on screen in the same interesting ways, accompanied with the occasional cutaways to the ‘Zombie Kill Of The Year’. As entertaining as these additions are, they often became a distraction. It’s been a decade since these characters were seen, so the story begins a little disjointed as we’re brought up to date with them.

Overall, Zombieland: Double Tap is perfect for fans of the ‘zom-com’ sub-genre. If you’re a fan of the first Zombieland, this sequel delivers everything one could ask for—funny gags, exciting zombie encounters, and terrific chemistry from all the cast. It starts sluggish but finds its footing. If the satirical comedy of The Dead Don’t Die went over your head, and you think The Walking Dead has long outstayed its welcome, Double Tap is a nice substitute. 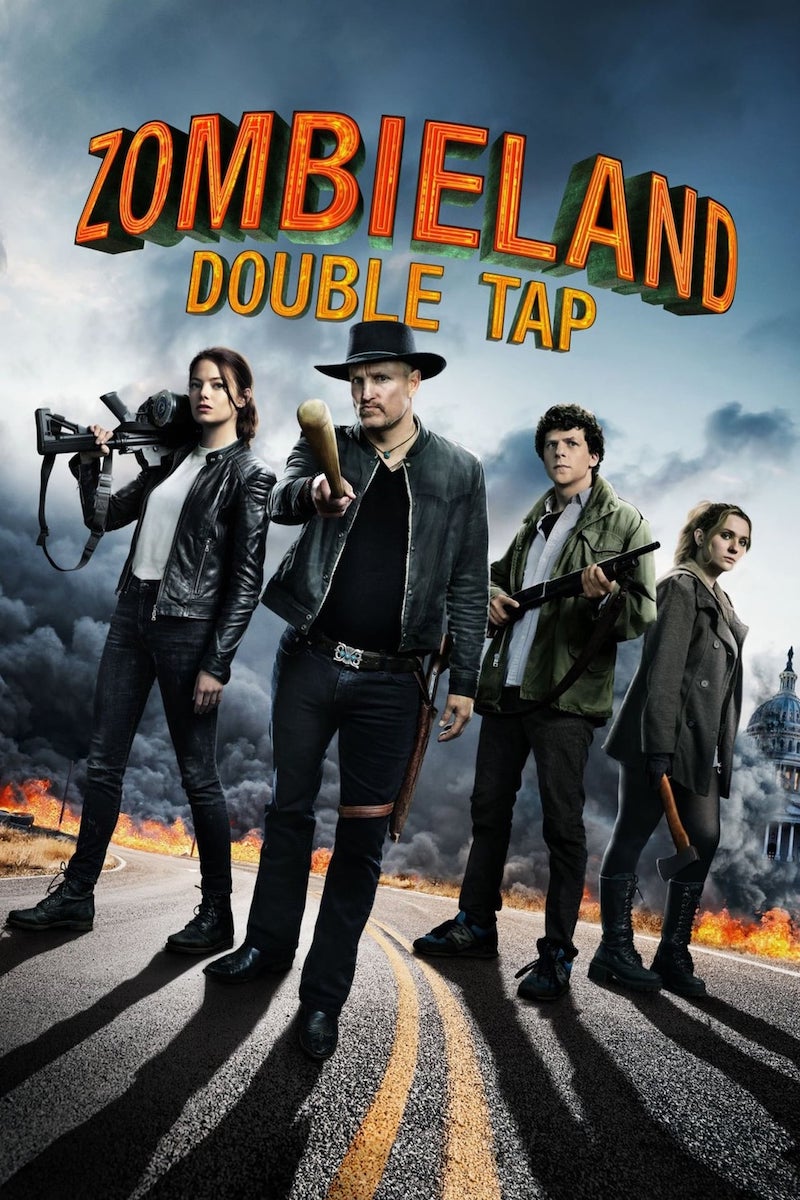 THE BIRD WITH THE CRYSTAL PLUMAGE (1970)