Walter Hill started the “buddy cop” craze of the 1980s, thanks to the success of 48 Hrs. (1982), which led directly to Beverly Hills Cop (1984), Lethal Weapon (1987), and all the other imitators. He returned to the genre at the tail-end of the decade with Red Heat, a film inspired by Hill’s desire to work with superstar Arnold Schwarzenegger on his “Russian cop in Chicago” idea. The Austrian Oak (who was on a phenomenal run since 1984 with The Terminator, Commando, Raw Deal, The Running Man, and Predator) agreed to star despite there being no screenplay, based solely on Hill’s concept and description of the opening scene.

Red Heat concerns stoic Captain Ivan Danko (Schwarzenegger), a member of the Moscow Militia, whose partner Ogarkov (Oleg Vidov) is killed during a sting operation to capture Georgian drug lord Viktor Rostavili (Ed O’Ross). Fleeing to the US, Viktor is fortuitously apprehended by Chicago cops for a minor traffic violation, which draws Danko to the Windy City to extradite the wanted criminal back to his homeland. Once on American soil, Danko is partnered by cocky detective Art Ridzik (James Belushi) and, after Rostavili escapes custody, they must work together to bring the kingpin to justice. 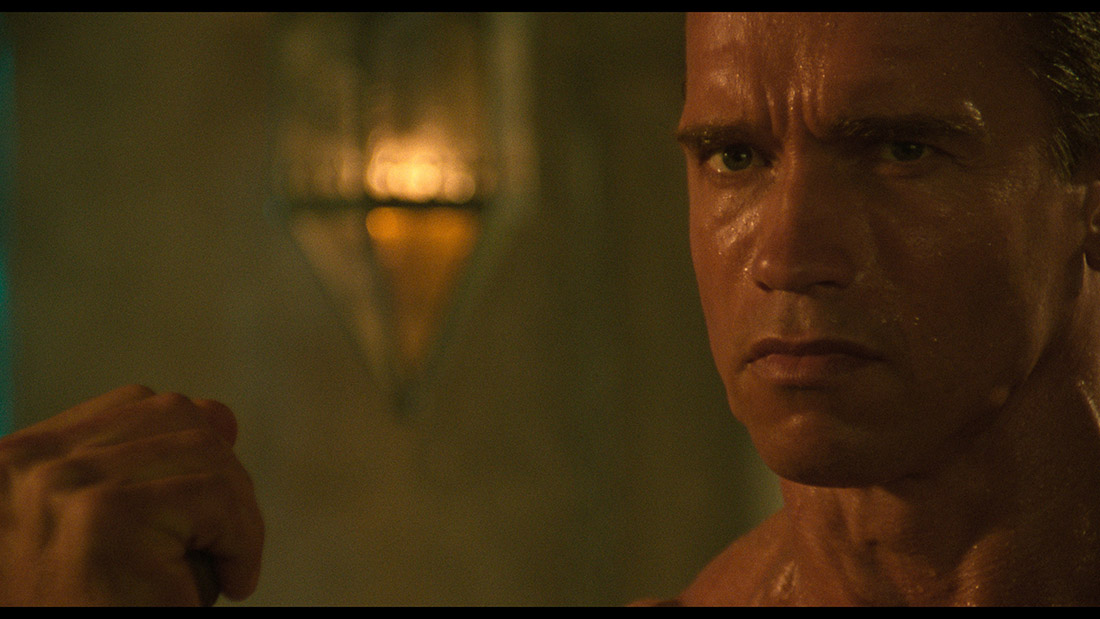 The screenplay was constantly being rewritten throughout the shoot, and it shows. Red Heat starts promisingly but the story doesn’t grip after the set-up’s been handled, so it’s left to Schwarzenegger and Belushi to try and overcome its problems through sheer force of personality. Unfortunately, this odd couple pairing doesn’t have the same magic as Nick Nolte and Eddie Murphy in 48 Hrs., or Mel Gibson and Danny Glover in Lethal Weapon. Schwarzenegger’s not the greatest actor in the world, so it’s understandable why Hill wrote Danko as serious and deadpan. Those are traits Schwarzenegger can handle as it mostly requires he deliver lines intentionally flat and look unflappable. Danko is almost as robotic as The Terminator, and it seems the only effort Arnie put into the role was learning how to roll his r’s to give the impression his thick Austrian accent’s moderately Russian in origin.

Belushi, for his part, goes through the motions as the more talkative and personable half of this odd couple. Danko’s sort of the Joe Friday to his Pep Streebek. But there’s never really any sense that Danko and Ridzik are becoming close friends, or even that they’re learning from each other’s approach to policing. They’re mildly corrupt in different ways—Ridzik plants drugs on a suspect (Brion James) to get him to talk, while Danko breaks the same guy’s fingers to get the same result. I guess that’s a “we’re not so different, you and I” statement that played well during the Cold War, but I’d have preferred a greater disparity in values and methods between the leads. 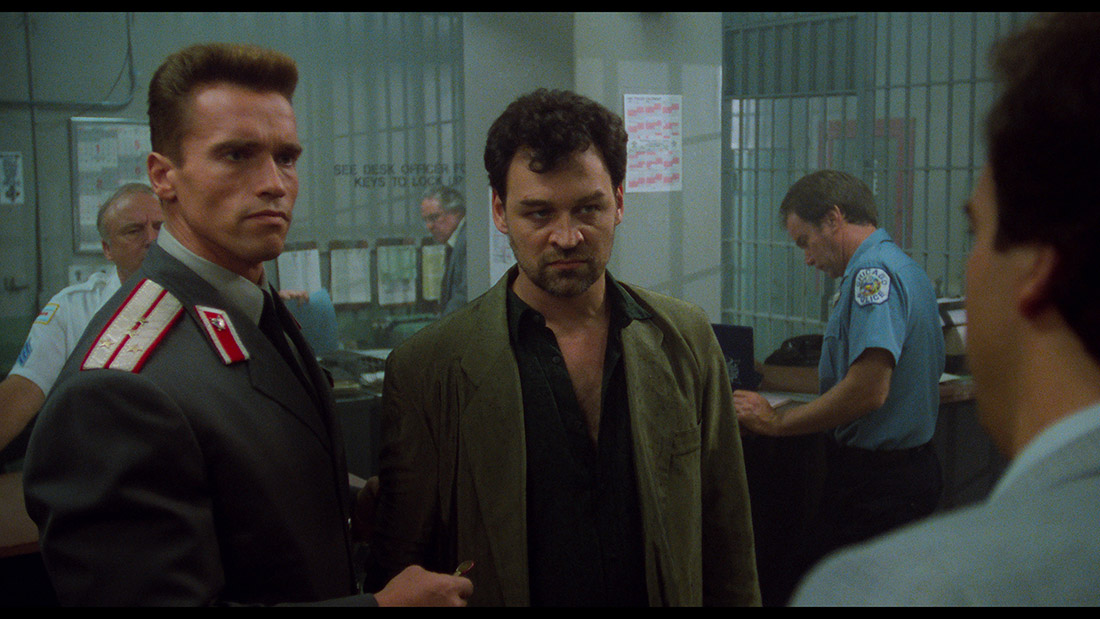 The dynamic of this duo is that stiff Danko’s intensely focused on his objective and is willing to die to reach his goal, whereas Ridzik’s would rather cut corners to avoid danger. It would be great if Red Heat demonstrated that, when working together, they make the perfect cop. Or that Danko starts to realise that Ridzik’s ways get results too, and vice versa, but that doesn’t happen to any great degree. They just fumble through a boilerplate narrative chasing after Viktor, eventually get their man, then go their separate ways. There was no sequel where the fish-out-of-water concept is flipped and Ridzik flies to Moscow, as the film only made $35M from an estimated budget of $29M. Red Heat was released three years before the Cold War officially ended, so Hill perhaps wanted to show that the world’s superpowers could work together on a professional and personal level, but the script doesn’t do enough to make any of those intentions shine through.

Red Heat is often cited as a low-tier Walter Hill movie and Schwarzenegger vehicle, and it’s hard to disagree. There’s a good idea here but it doesn’t work because the action’s not particularly memorable (apart of the opening scene’s fight in a sauna) and the comedy doesn’t fly. Twins (1988) came out the same year as Red Heat and was a better vehicle for Schwarzenegger, as it allowed him to play against type and find a strange sweetness to another musclebound character in a dorky suit, plus it had Danny DeVito to ensure the laughs came through. Belushi’s overshadowed by Schwarzenegger as a screen presence and the balance of comedy to action swings too much in the latter direction. This was likely intentional because Hill wanted to move Danko’s character away from wisecracks and portray him as a human being, but it robs the film of some of the fun it might have had. 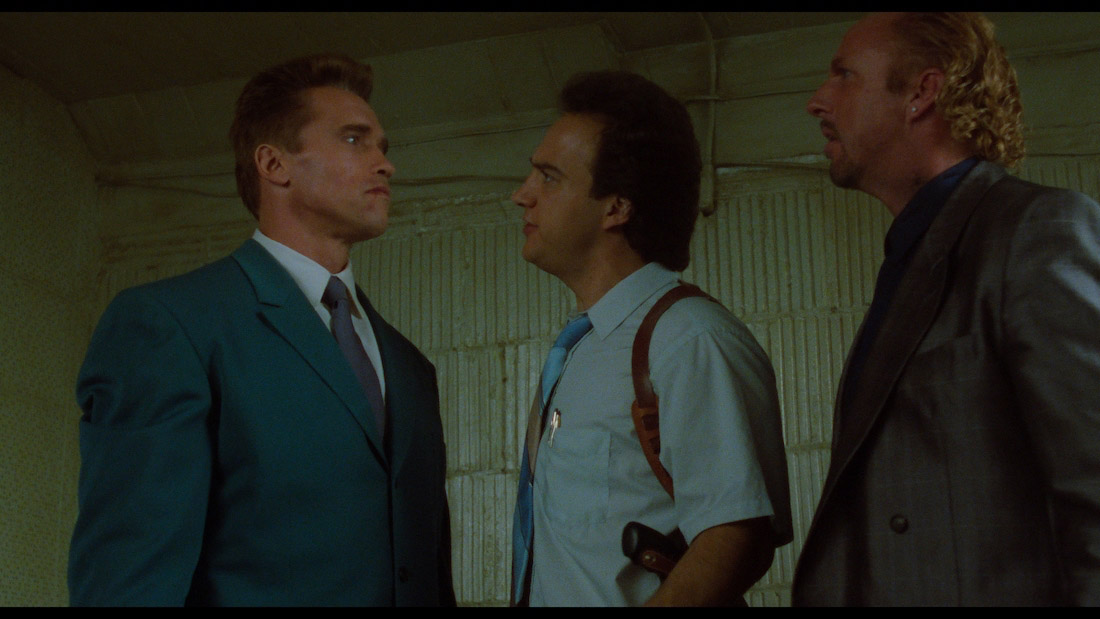 Coming after Commando (1985) and Predator (1987), there’s nothing in Red Heat that competes with those levels of machismo and violence ’80s audiences had come to expect from Schwarzenegger since Conan the Barbarian (1982). When the big climax involves someone of Schwarzenegger’s physicality driving a bus through city traffic, avoiding the chance to have him brawl his way to victory against the villain, you know some bad choices have been made.

Interestingly, Red Heat has the distinction of being the first American film to shoot in Moscow’s Red Square, despite having to sneakily film there because they were denied a permit by the government. Most of the scenes set in Russia were actually filmed in Hungary, so the footage of Red Square they managed to get with a four-person crew was used as a background during most of the end credits. 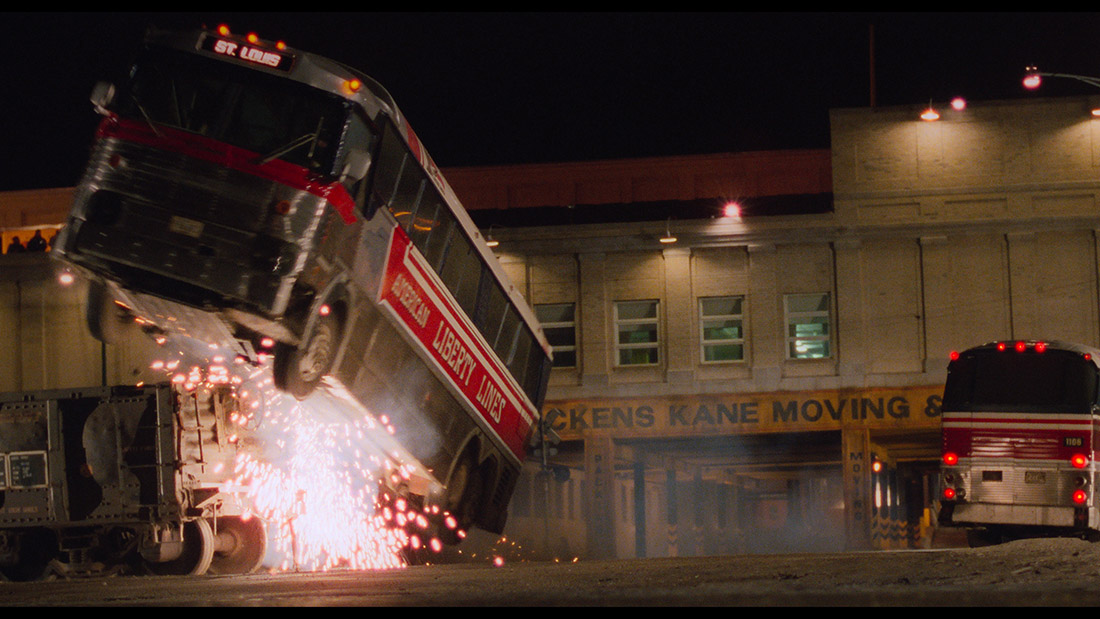 Overall, Red Heat is probably the Schwarzenegger film most people haven’t seen because it was sandwiched between far better offerings, and it has the whiff of being a generic Lethal Weapon clone. But there are some positives here; most notably the chance to see Schwarzenegger in his physical prime, squeezing off rounds with a handgun that sounds like a miniature canon, and punching people with cartoonish sound effects played over (God bless the ’80s). It also captured the mood of the late-1980s and how Reaganism was trying to put the Cold War to bed and instead mount a war against drugs, which is essentially what the characters of Red Heat have a mutual bond over. Hands across the Iron Curtain.

There’s also a certain rugged charm to the film thanks to Walter Hill and some interesting supporting players in Peter Boyle (as a hardboiled police chief) and a young Laurence “Larry” Fishburne (as a cop), but Red Heat is unlikely to become your favourite film of anyone involved. 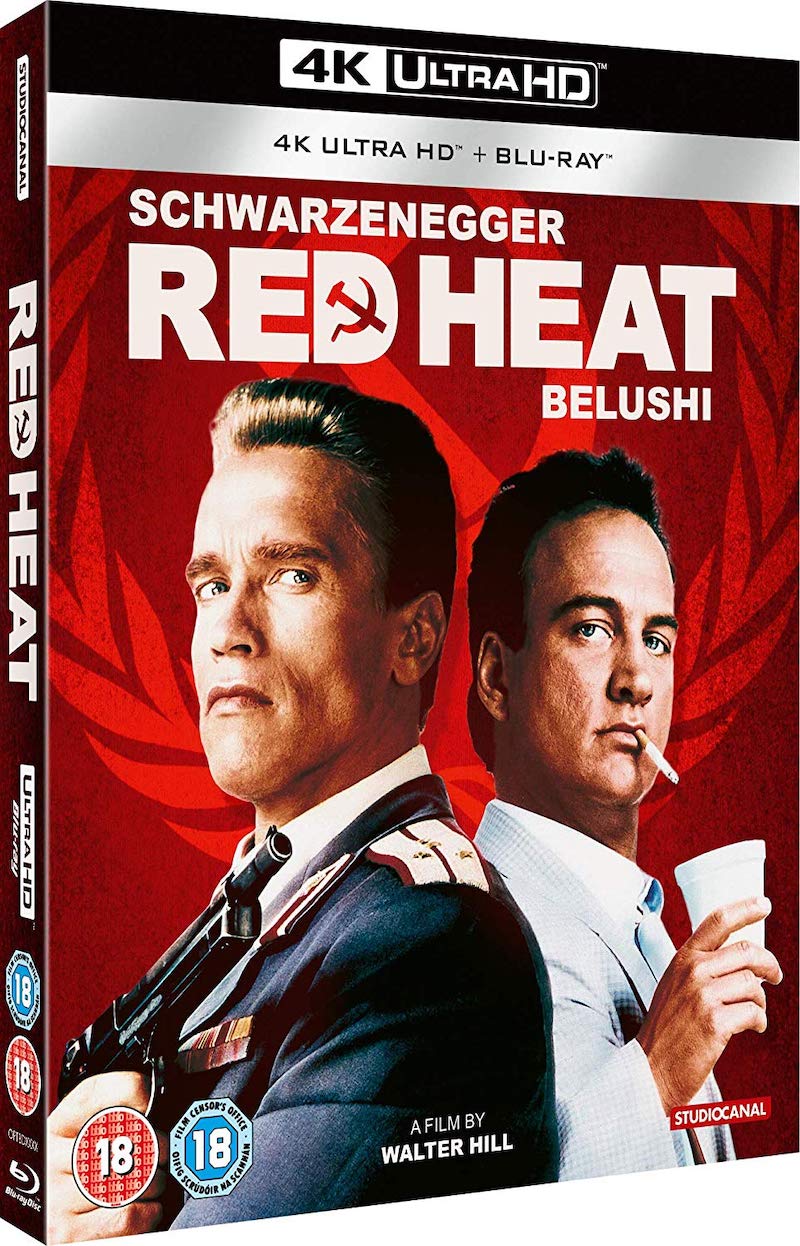 Once again, StudioCanal delivers a top-notch 4K restoration of an older movie. Red Heat has been remastered from the 35mm film source and even comes with Dolby Vision (sadly unavailable on my Samsung TV) for improved High Dynamic Range (HDR) with frame-by-frame metadata. The 1.85:1 aspect ratio image is native 4K and the movie has never looked better than here. In fact, this is one of the best looking ’80s films I’ve seen on the Ultra HD format, looking incredibly fresh and detailed with vibrant colours and wonderful skin tones. There’s some Digital Noise Reduction (DNR) but it’s not excessive and the results speak for themselves. This looks great.

No Dolby Atmos mix for bring Red Heat, but the attendant DTS-HD Master Audio 5.1 is still good and will cover your aural needs. It’s not the liveliest of soundtracks and it’s a little front heavy, but it packs a punch with the brash ’80s-era sound cues and James Horner’s score (some of which would be recycled for the Jack Ryan movies with Harrison Ford and John Woo’s The Killer). There’s also a DTS-HD 5.1 mix in German and a DTS-HD Stereo mix in French.