Sony has owned the rights to Spider-Man for years. Sam Raimi’s Spider-Man (2002) and Spider-Man 2 (2004) started strong, but after the shambolic third instalment, the studio’s momentum was lost. Having attempting to reboot the franchise with two Amazing Spider-Man movies (2012-14), it was clear the studio’s creative spark had been extinguished. Sony then surprised everyone by agreeing to share Spidey with Marvel Studios (resulting in Spider-Man: Homecoming) for a cut of the profits, while retaining the rights to make movies with other ‘Spider-Verse’ characters. The first of which has now arrived, focusing on burly, razor-toothed supervillain Venom.

The creation of David Michelinie and Todd McFarlane (Spawn), Venom first appeared in the comic Spider-Man #300 and soon developed a cult following. More casual fans will remember him as a third-tier baddie from the overstuffed Spider-Man 3 (2007), played by Topher Grace (BlackKklansman). In the wake of the successful but adult-skewing Deadpool (2016) and Logan (2017), Sony decided to embrace the idea of comic-book movies with a darker tone appealing to mature audiences.

Gangster Squad’s (2013) Ruben Fleischer was hired to direct Venom, starring Oscar-nominee Tom Hardy (Mad Max: Fury Road), and those decisions indeed suggested Sony would opt for a far darker tone than ever before. Unfortunately, creative differences and last-minute marketing concerns have resulted in the edgier material being jettisoned. Venom was supposed to be R rated in the US, but it’s now been certified PG-13 so young Spider-Man fans can see it. Although, here in the UK, the BBFC have deemed it a 15 for “strong threat, horror, [and] violence”. 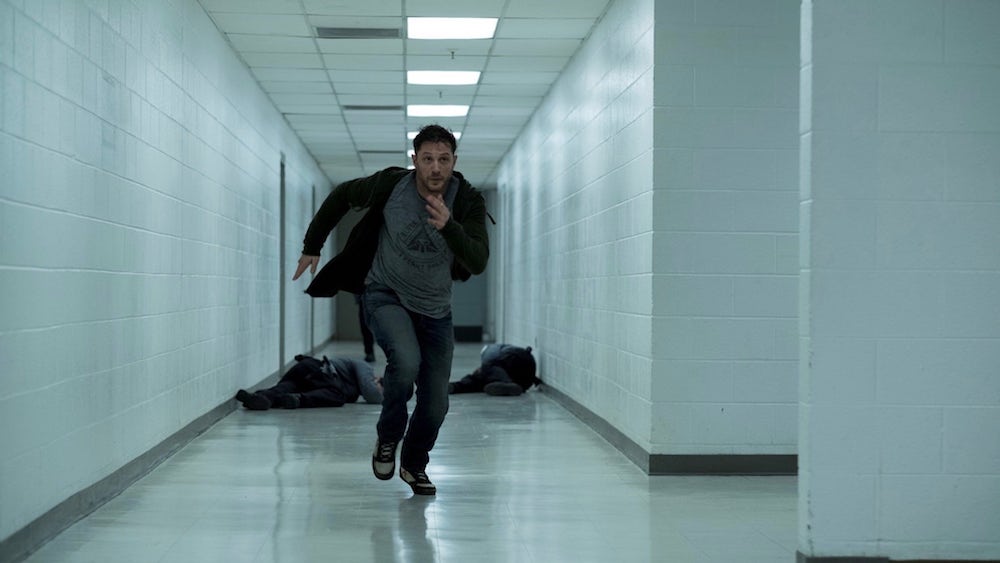 Eddie Brock (Tom Hardy) is an investigative journalist dedicated to taking down large corporations and defending the common man. Leading his own TMZ-style show, Eddie’s enjoying the good life in San Francisco with his fiancé, Anne Weying (Michelle Williams), when he’s assigned to write a piece on the CEO of The Life Foundation: Elon Musk-styled tech tycoon Dr Carlton Drake (Riz Ahmed). Knowing his fiancé works for a law firm representing Drake’s foundation, Eddie hacks her computer and discovers incriminating information. However, after presenting his findings, Eddie’s life slowly falls apart: Anne breaks up with him, he loses his show and is blacklisted from journalism.

Six months later, Eddie’s living as a down and out, until he’s approached by whistleblowing Life Foundation scientist Dr Dora Skirth (Jenny Slate), who explains how Drake’s been attempting to mix humans with alien “Symbiotes”. With nothing to lose, desperate to get his life back on track, Eddie turns investigator again, but is himself infected by a dangerous Symbiote… that eventually introduces itself to him as ‘Venom’. 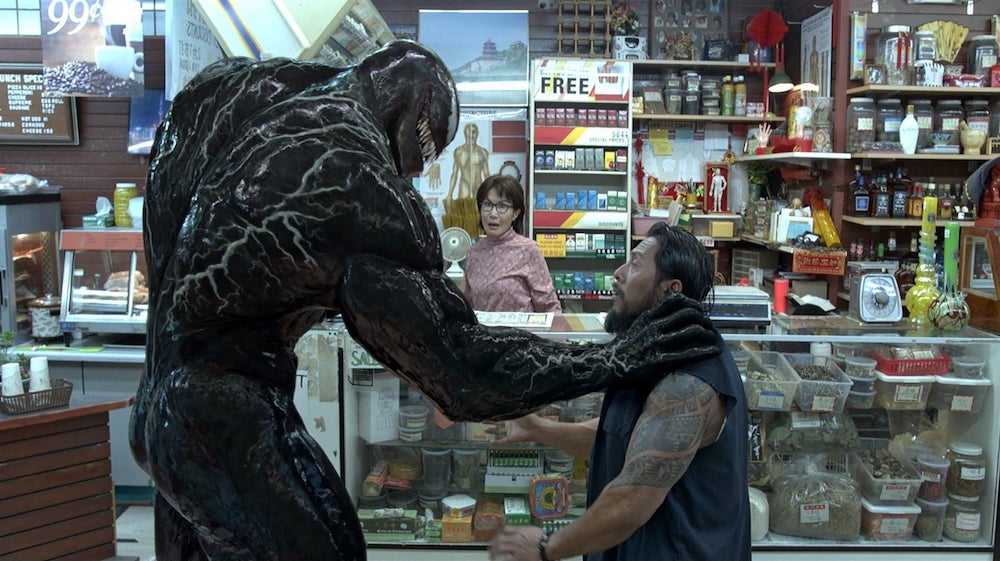 There’s no denying Venom’s a movie with wonderful actors involved, but the cast are wasted on such a cliched script. Hardy does an incredible job portraying Eddie Brock (despite a screwy New York accent) because he sells the pathos and confusion of a character largely comprised of facial tics, squeaky vocals, and a hunched body language. Intermittently resembling Jim Carrey in Liar Liar (1997) and Johnny Depp in Pirates of the Caribbean (2003), Hardy’s dynamic with Venom also evokes Rick Moranis and the man-eating plant in Little Shop of Horrors (1986). The improvised banter between Brock and Venom (whom Hardy also voices) is a hilariously internalised Dr Jekyll and Mr Hyde-style relationship. However, compared to his incredible performances in Bronson (2008) and Legend (2015), Hardy’s barely being stretched by the material.

The same can be said for fellow Oscar-nominee Michelle Williams (Manchester By The Sea) as Brock’s fiancé Anne. Frequently, the emotion and passion she brings to the movie feel out of place for a silly comic-book movie. She also carries a similar blank expression throughout every scene, while her lack of onscreen chemistry with Hardy is palpably boring. 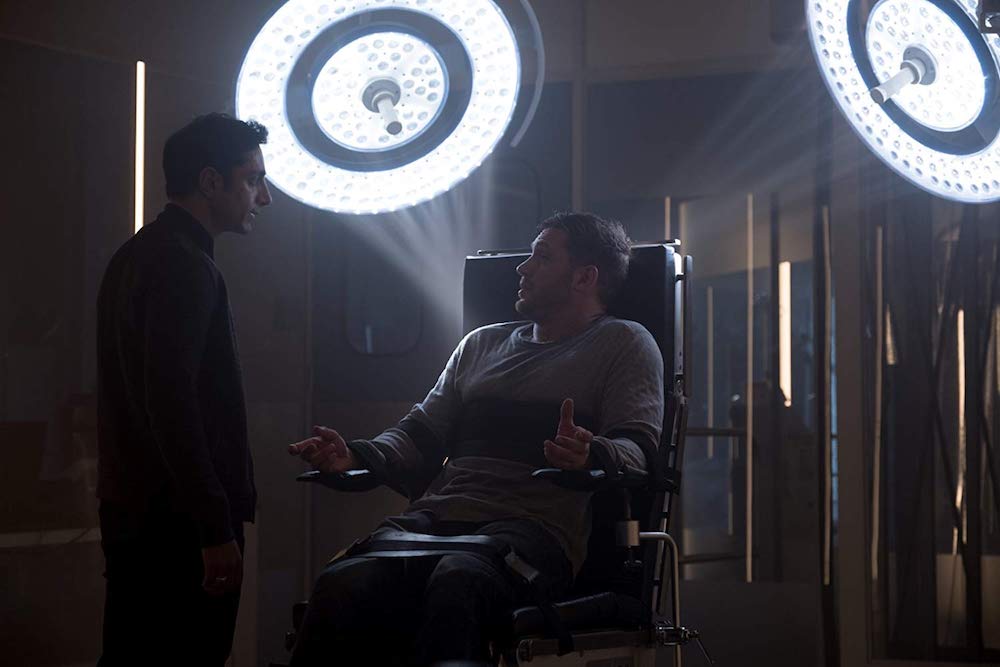 Riz Ahmed (Rogue One: A Star Wars Story) as villainous megalomaniac Dr Drake is a welcome contrast to the usual Frankenstein-style psychopaths, but his villain’s obsession with combining aliens and humans never feels threatening. His reasoning is also never rationalised well enough, and Drake’s trite dialogue is a dreadfully confusing ramble of scientific gobbledegook.

Reuben Fleisher proved with Zombieland (2009) and 30 Minutes Or Less (2011) that he can mix comedy with horror. On paper, he’s the perfect choice for a movie about a powerful anti-superhero that decapitates people. However, Venom’s lack of blood and gore leaves several scenes feeling flatter than intended. Instead of an enjoyably gore-fest, Fleisher’s instead made a twisted ‘odd couple’ comedy, set in a comic-book milieu, opting to focus on the relationship between Eddie Brock and his maniacal Symbiote.

Many of the themes explored lack depth and subplots are dropped from the narrative without an explanation. Moments of Fleisher’s comedic chops appear whenever Eddie interacts with Venom, as watching the two reacting to the world around them creates some unique and amusing scenes. When Venom’s inner voice injects his wild humour into Eddie’s internal monologue, it feels like a weird homage to Innerspace (1987), helped by Hardy’s surprisingly adept comic timing. 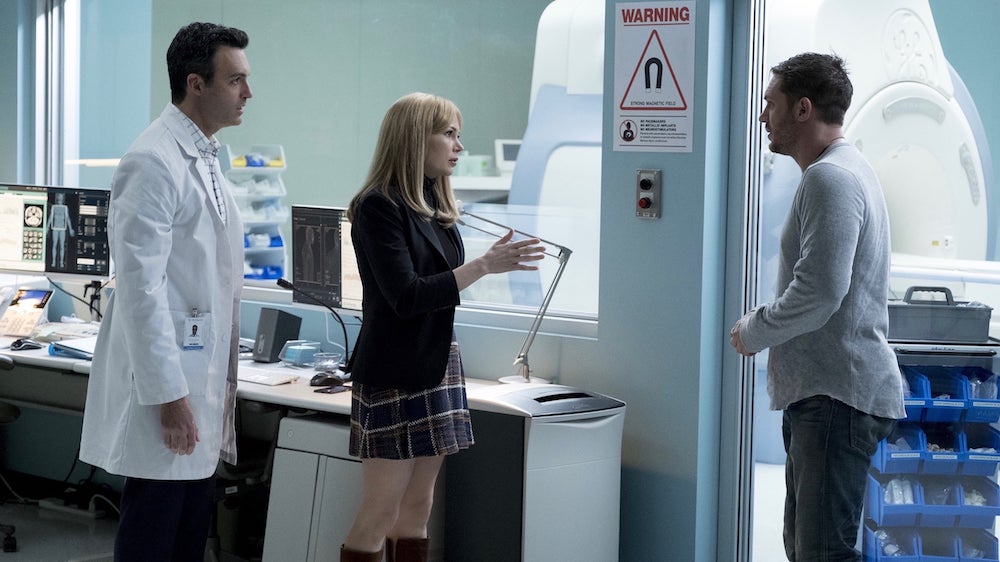 The special effects are where Venom excels, as the Symbiote itself looks great. Time and money clearly went into creating Venom’s unique inky-black look and it’s a faithful interpretation that will please fans. The cinematography by Mathew Libatique (Black Swan) also successfully creates a moody aesthetic that compliments the film nicely.

But the chaotic action sequences are a different matter. A motorbike chase through downtown San Francisco relies on an overwhelming amount of greenscreen that’s distracting and removes all sense of suspense and fear. Also, in common with many other comic-book adaptations, it climaxes with an F/X overload where two mostly indistinguishable CGI characters battle it out. The abundance of flailing limbs and oily sinew make it difficult to differentiate between people and creatures, much like the fight sequences from Michael Bay’s Transformers films.

Despite its flaws, my lasting impression of Venom is oddly positive. It’s self-aware and there’s a healthy element of offbeat humour. As he literally does with Eddie Brock, Venom gets under your skin and eventually starts winning you over with his smart-ass one-liners. Tom Hardy is so OTT his scenes are thankfully never boring, being the glue that prevents everything from spinning apart completely.

It’s too easy to blame a troubled production and marketing anxiety for a movie’s failure, but the many faults Venom suffers from don’t necessarily make it “a turd in the wind.”