“Something’s going on.” Those words are spoken plainly and without panic early on by Officer Ronnie Peterson (Adam Driver). His statement of facts comes after he and Chief Cliff Robertson (Bill Murray) observe that, despite the lateness of the hour, there is still bright daylight outside. And not only that, but Ronnie’s watch has stopped ticking and his phone has died. Something is definitely going on. As Ronnie casually observes, “this isn’t going to end well.”

Jim Jarmusch’s thirteenth film continues the director’s streak of pleasingly lackadaisical storytelling. Snatches of information come through ancient crackling radios about the earth being knocked off its axis by polar fracking. Strange lunar activities occur. The crows begin to behave strangely. The dead have risen from their graces, naturally. And the folks in Centerville, USA, are aggrieved to be having to deal with this nonsense.

If the characters in The Dead Don’t Die care about an impending zombie apocalypse then they’re not very good at showing it. As Ronnie, Driver is comically blank. He adopts the kind of bleak acceptance of a man standing on the gallows before he swings. As Cliff, Murray exudes over-the-hill weariness. He’s more reluctant to believe what is happening yet he takes no umbrage in firing a round into the head of a recently deceased lush (the legendary Carol Kane), who’s up and looking for some Chardonnay. 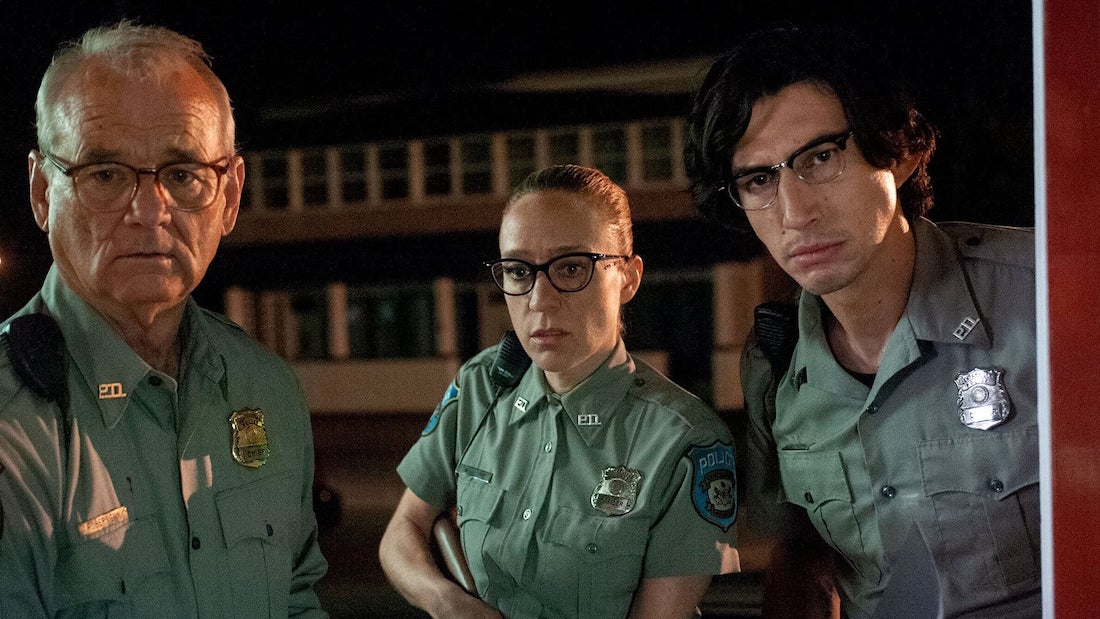 It’s Officer Mindy Morrison (Chloë Sevigny) who’s the most troubled of their small team. Sevigny gives Ronnie a gentle sweetness that eschews the actress’s innate coolness. When Ronnie offers the understatement of the year (“oh, yuck“) while observing a grisly crime scene, Mindy’s outside vomiting. While Cliff sighs a poignant “I know them” upon seeing dead children stumbling along darkened streets, Mindy is colossally overwhelmed upon seeing familiar faces amongst the dead.

Ronnie might be correct when he says “this is all going to end badly”, but nobody in crisis mode wants to hear from a know-it-all. “Shouldn’t we be telling each other that it’s all going to be okay?” Mindy tearfully begs. “Gee, Mindy. I’m not sure I can say that,” Ronnie responds. Is he cold and without compassion? Or is he just right?

Stuck in a jailhouse and a police cruiser for most of the film’s runtime, Officer Mindy’s endearing heartbeat amongst the dead makes her feel like the last person on earth. Yet, out there in another Centerville lockup there is life. In a Juvenile Detention Centre, we meet three sweet kids: Olivia (Taliyah Whitaker) and Stella (Maya Delmont) let Geronimo (Jahi Winston) sneak onto the girl’s floor so that they can hang out and watch TV. They also correctly theorise about polar fracking and its relevance to the end of the world. 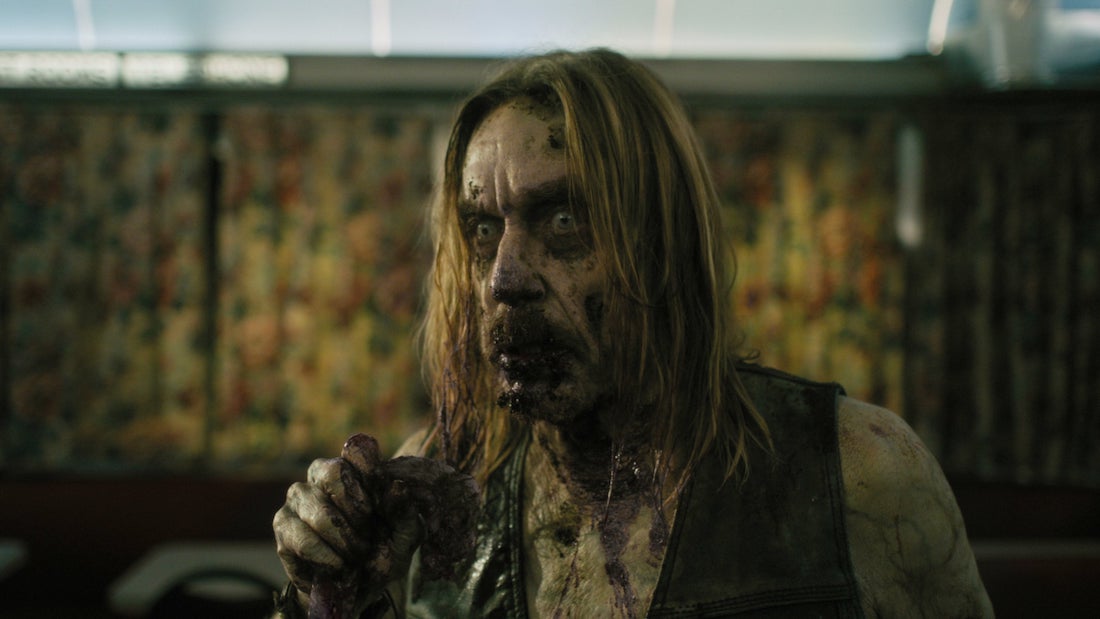 They’re smart children, gentle and caring. Stella’s one of the only characters in the film who can’t get any sleep. She’s too troubled by the state of things. Jarmusch casts roles carefully. It doesn’t feel like a coincidence that the three most aware and successfully proactive characters are young and African-American. Jarmusch, who’s always quietly championed diversity in his impeccable casts, does lovely work with these kids. It’s only a shame that they don’t get a bit more screentime, as other story strands claw their way out of the ground.

Farmer Miller (Steve Buscemi) highlights that this is Jarmusch’s most openly political film. He sits chugging coffee (“too damn black”) in his red ‘Keep America White Again’ cap. It’s no coincidence that the first zombie he encounters is African-American; would his hostility towards the dead man banging on his door be any less bitter if he wasn’t a zombie?

Elsewhere, Hermit Bob (Tom Waits) lives out in the woods and takes great joy in tormenting Farmer Miller. His face retreating into a mass of white hair and beard, he’s an off-the-grid pessimist who’s abandoned humanity—something it’s hard to imagine a humanist like Jarmusch endorsing. Instead, we wonder about how wise Bob really is. Crackpot or sage? Either way, he gets to deliver the film’s thesis-statement, as if it needed one. The Dead Don’t Die, perhaps intentionally, isn’t subtle in its commentary. 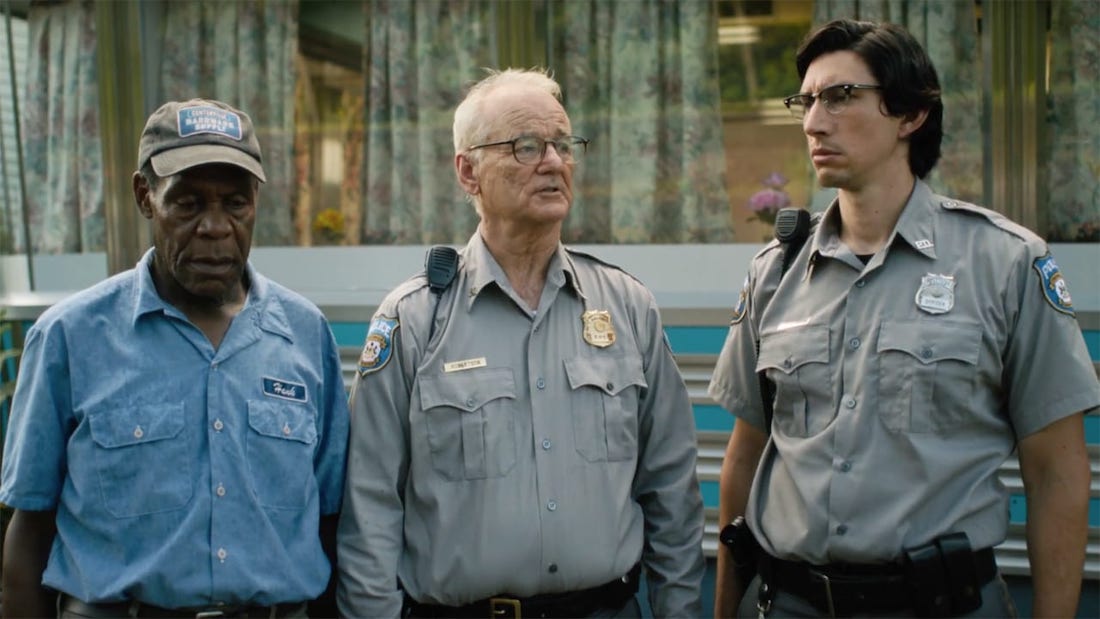 The dead drag along their broken legs and broken phones, all the same, gravitating to the things they knew in life. “Wi-fi” growls one like an overtired holidaymaker in a hotel lobby. “Coffee,” groans another, aptly played by Iggy Pop. Their behaviour isn’t a million miles away from Dougie’s (Kyle McLachlan) in Twin Peaks: The Return. When revived from the darkest of places they cling only to their most basic cognitive functions which, in this case, is to consume things. Brains, flesh, Xanax, it’s all the same.

There are riffs on George A. Romero’s consumerist satire Dawn of the Dead (1978) at play here, but 41 years after that film established its powerful central metaphor, Jarmusch’s version of the same topic sometimes lacks bite. Thankfully, when a moment of cultural-commentary only manages a half-dead swipe at its target, something funnier, sharper or sillier is crawling along behind it.

If Jarmusch’s scripts are hilariously deadpan, then his visual style certainly matches it. Cinematographer Frederick Elmes shoots with a warm simplicity seemingly antithetical to the zombie genre, but with humour that allows visual jokes to sit in their brilliance. At the scene of the first attacks, Cliff tells a distraught Mindy that he’ll put her on crowd control. The camera pans slowly over to see… The camera pans slowly over to see… Mindy moving on three bystanders. 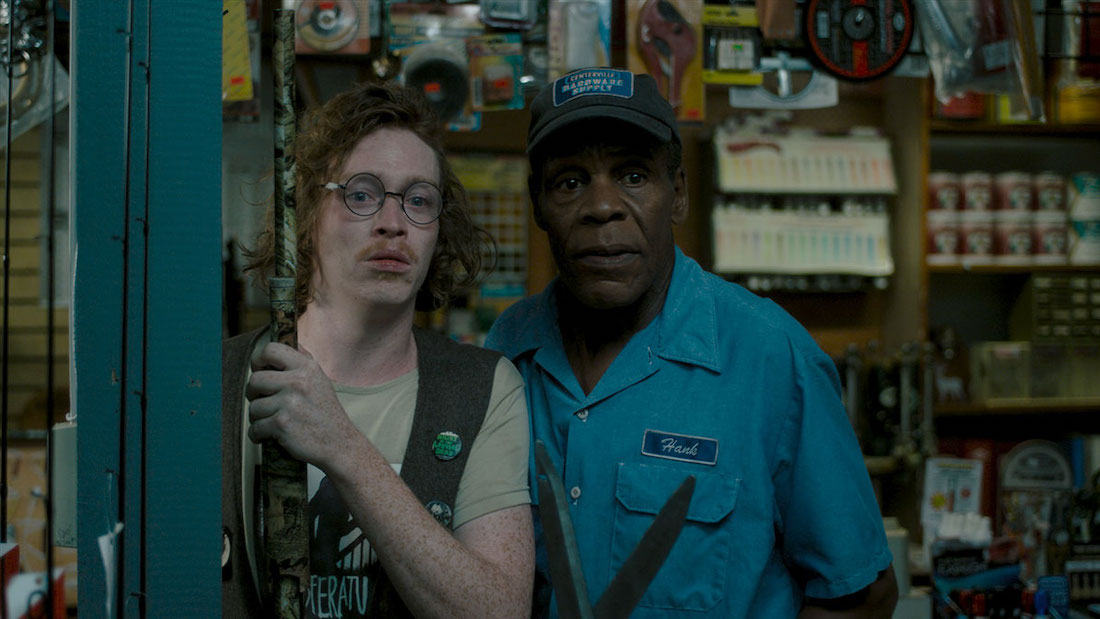 Jarmusch is wise in letting his film change tone. After the midway point, the darkness of the sky and the reality of the situation begin to set in. Though still never pushing its pace beyond a stroll, a grim and spiralling fatality begins to set in. The jokes are still there, but so is an end-of-the-world doom designed to elicit a thought: how would we react to the very worst happening? We need not wonder, the film tells us, as we’re already there. Far-right politics become depressingly normalised. A President of the United States who organises modern-day concentration camps sits happily in the White House. The worst has happened and all it elicits is a shrug. And perhaps when we’re shuffling around later, all we’ll look for is some easy and familiar comfort.

The events take place in Centerville. It might be the centre of the USA, or it might be the centre of the political spectrum, where right-wing violence is tolerated in the name of a false ‘balance’. When faced with doom, the characters in The Dead Don’t Die don’t do much besides drive around the streets and lop the head off the occasional zombie. At one point, the owner of a funeral parlour-cum-Samurai-Master Zelda Winston (Tilda Swinton) appears to be taking a leisurely stroll down a zombie-filled street. 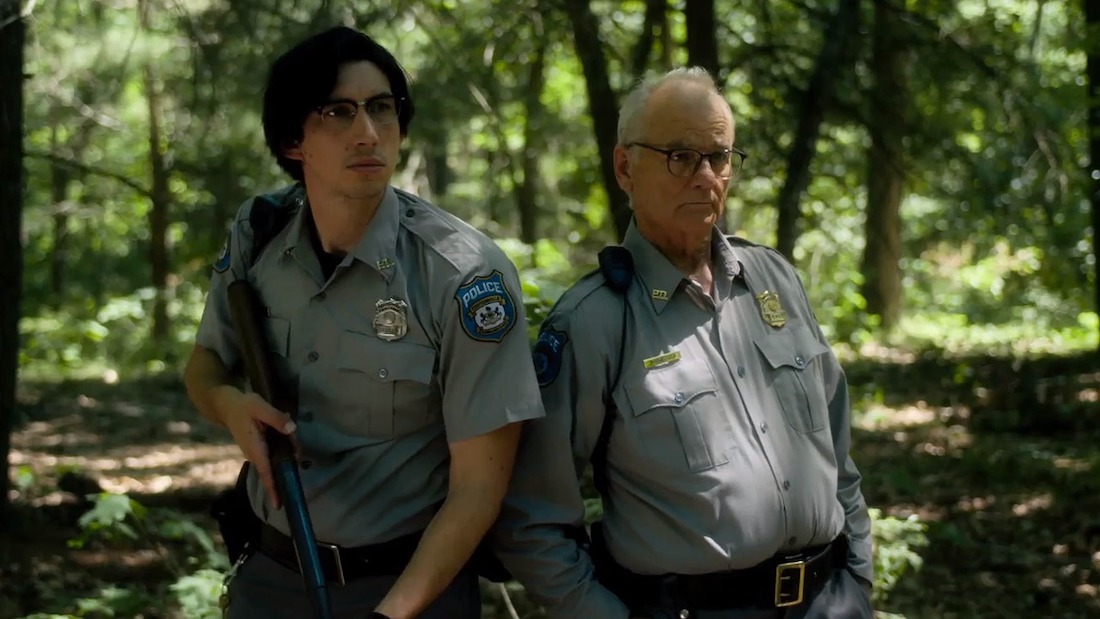 One gets the sense that if given the chance, these people would go about their day as normal and simply ignore the ghouls at the door. But the film doesn’t seem to be placing blame on these people. A radio broadcast early on highlights the deceit of politicians and large corporations, who are responsible for the global disaster. It’s clear who the real villains are.

But Jarmusch doesn’t make political thrillers. He doesn’t often globe-trot. And you never see the world outside of Centerville. As in the wonderful Paterson (2016) and Mystery Train (1989), the film’s action stays within the borders of a small town and is concerned with ordinary people. Often curious about how folk go about their lives, here he’s curious about how people’s lives play into a disaster they may have helped actualise.

Mostly, he approaches it from a bemused and amused angle, distanced with humour and observations. He’s not an angry director, though he gets close in the film’s coda. These scenes are perhaps the gloomiest and most outraged Jarmusch has been. They are a grey swirl of bleak images and end-of-days doomsaying. It’s also the most alive the film feels—suggesting that some anger can be good for you and the world—scored to gutturally powerful post-rock guitar dronings by Jarmusch’s band SQURL, as the images on screen become physically darker, greyer and more oppressive. It’s not so funny anymore. 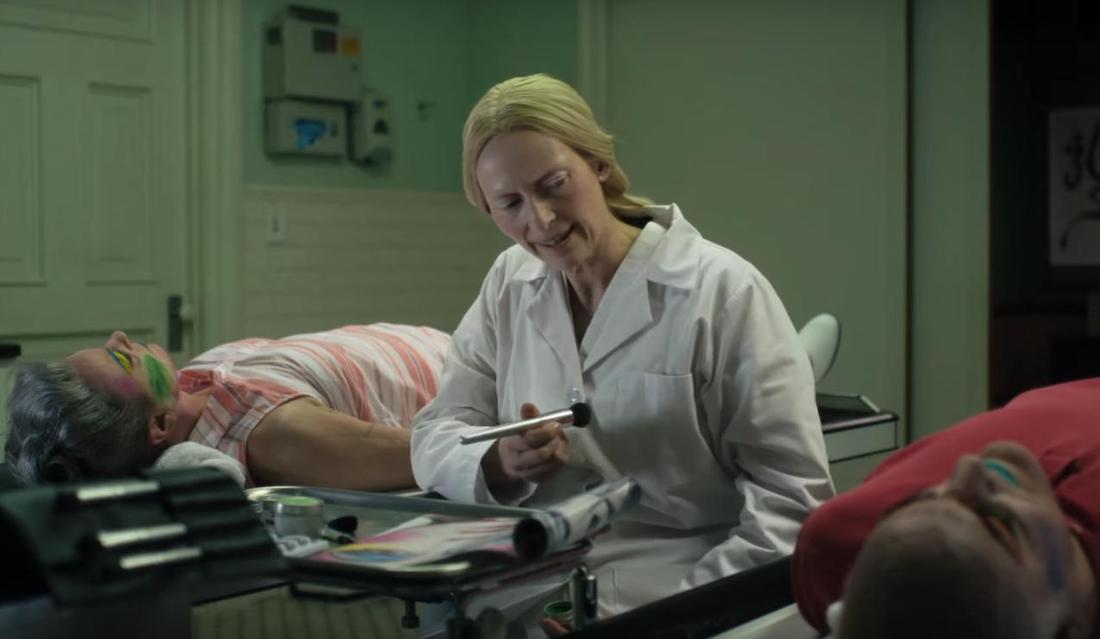 The increasingly grim film is understandably disinterested in any closure or satisfaction. An apparent saviour leaves the film in a startlingly strange way. The zombies spray ash and dust rather than blood. Ronnie and Cliff apparently know they’re in a film. How does Ronnie know it’ll end badly? “I read the script,” he says. The fourth-wall-breaking that’s sprinkled throughout is amusing but also highlights how characters have given up on any kind of agency. They’re in a film, so what can they do? It’s not their story. How can they possibly have control of a situation that they didn’t write?

“What a fucked-up world,” Hermit Bob says. But this is at odds with what delivery driver Dean (RZA)—who drives for ‘Wu-p-s’, one of the best jokes in the film—tells horror buff Bobby Wiggins (Caleb Landry Jones) earlier on. “The world is perfect”. If it’s perfect, then we’ll never try to improve it. If it’s fucked up, then we’ll believe it’s too late to save it. Perhaps they’re both right, to a degree. Hopefully, we can find the truth amongst some combination of the two and try to make sure it doesn’t end badly.