A jazz pianist falls for an aspiring actress in Los Angeles.

La La Land was in the unenviable position of being hyped to high heaven months before its release. From its first screening at European film festivals in the summer of 2016, advance word was extremely positive, and by the time it reached the London Film Festival, it was already a front-runner for Best Picture at this year’s Academy Awards. So adoring were these early reactions that in some quarters, the backlash has already begun before its wide release to the public. Hype is a dangerous thing for a movie to come packaged with, but sometimes the hyperbole is justified.

La La Land is director Damien Chazelle’s follow-up to Whiplash (2014); his lean, mean, intense film about a young jazz drummer and his abusive mentor. While this follow-up doesn’t feature anything so fearsomely powerful as J.K. Simmons’ Fletcher, it’s another movie that will sweep you up completely, even if this time it’ll leave you soaring rather than sweating.

The “La La Land” of the title is a play on words—referring to both Los Angeles and the strange, dreamlike world of Hollywood within the city. The film is an ode to both; a love-letter to the golden age of musicals and the Hollywood of yesteryear. It concerns itself with the dreamy art of filmmaking and, this being Chazelle, jazz music. The director’s own script immerses itself in the magic of those elements, by exploring their perceived decline (or evolution?) in the modern age. It’s also a classic love story starring two of Tinseltown’s most charismatic performers working today. 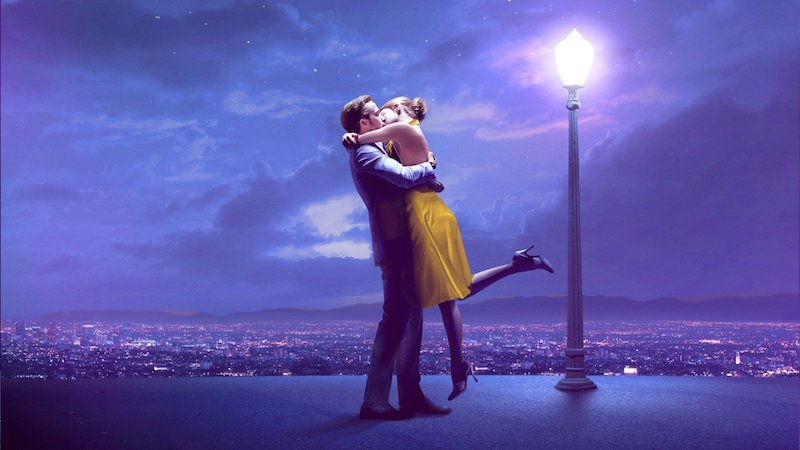 Mia (Emma Ston) is a struggling actor working in a café on a Hollywood studio lot, while Sebastian (Ryan Gosling) is jazz-obsessed musician struggling to make a living. They’re both down-on-their-luck, but very likeable with it. When their paths initially cross it’s far from love at first sight, but the universe seems intent on throwing them together. Inevitably, they end up making a connection, each seemingly the missing piece of the other. But as the couple begin to generate varying degrees of success in their respective fields, will their love stay true, or is this sweeping romance doomed to fail?

As you may have read elsewhere, La La Land is a particularly “white” film, and both Mia and Sebastian are well-off even before they begin to pursue their dreams, which doesn’t make them terribly relatable to the average filmgoers. The tribulations of beautiful, affluent white people in Los Angeles isn’t a particularly universal story, but it’s in their romance and deep chemistry with one another that the film sucks you in.

The sheer exuberance of Chazelle’s film is astounding and infectious. The fluid, sweeping camera work is majestic, the choreography beguiling, the vibrancy of colours enchanting. The film opens with a pan across traffic on a busy, sun-baked Los Angeles overpass ( as archetypal an image of LA as you could hope for), with the mix of musical styles emanating from each car window instantly placing you in a world where everything can come together and anything is possible. By the end of the opening number—which dazzles you into submission before you even know what’s happening—you’ll be completely under the movie’s spell.

The mise-en-scène is beautifully layered, as there’s always something happening in the background, and yet the film never feels too busy. The backdrop is littered with timeless posters and artwork, while classic Hollywood visual devices like neon signs floating across the screen are used evocatively. One musical number sees Sebastian dancing his way gently down a pier, taking a passer-by in his arms as he goes. When the lady’s husband shoos Seb away, rather than walking off disgruntled, the couple take up the dance themselves, and continue to twirl away in the background; the stars of their own private movie. It’s a small but utterly delightful moment, and typifies what makes this dreamlike picture so endlessly charming.

As the leads, Stone and Gosling are exceptional. Their amazing chemistry (they’ve worked together twice before) allows for a surprising level of humour and a real depth of emotion to flow from proceedings. A dinner between the pair starts off lovingly, and over the course of the scene, descends into something altogether darker, as wounds are opened and the sense of elation behind their relationship dissipates quickly. It’s no coincidence that the scene begins with Sebastian’s jazz music playing amiably in the background, yet ends with the harsh beeps of a smoke alarm. 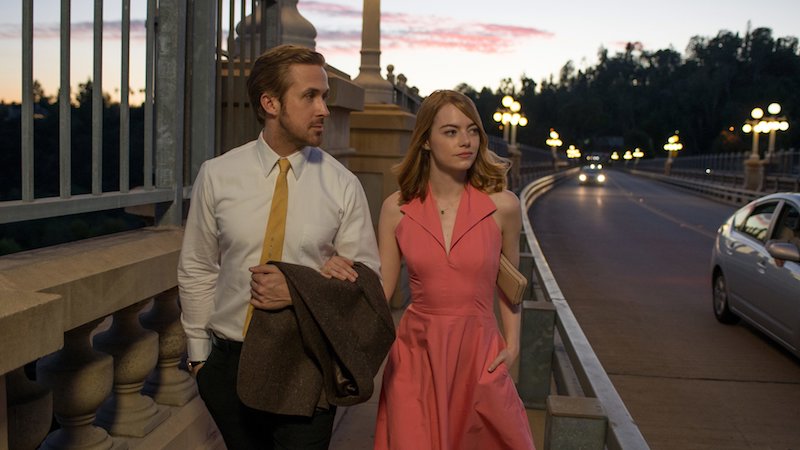 If there’s a complaint to be made about La La Land, it’s in the pacing. As the runtime passes the hour mark, and Seb and Mia’s relationship grows ever-rockier, the expansiveness of the musical numbers contracts, the vibrancy of the costumes wanes, and the film loses some of its spark. This is arguably intentional (the adrenaline of their early flirtations and the passion of their relationship fading to a more desolate and wrought second half), but it does leave the film feeling top heavy.

But even this less dynamic second half boasts outstanding moments, the most affecting of which is an audition of Mia’s, which takes the form of an Emma Stone solo. As Mia begins to tell a story through the medium of song, the camera slowly moves in on her, before eventually circling around her back and moving out again. It’s one unbroken take, and Stone is magnetic throughout, managing to convey so much with every movement of her face and with every crack in her singing voice. It’s a moment where vocals and acting are one and the same and it’s astonishing to behold; every bit as riveting as the drumming sequences from Whiplash.

And as anyone who saw that previous movie can attest, Chazelle knows how to do an ending, and if the second half lacks the fizz of the first, La La Land still manages to end on a spectacular note. The closing sequence (a sort of have-your-cake-and-eat-it-too moment that’ll be familiar to fans of Mommy and Arrival), sweeps the audience back through the film, and through the changing face of the musical art form. Chazelle is showing off all of his style and flair in one dazzling sequence; everything that’s brilliant about the film condensed into five or six minutes. It’s as effervescent as anything you’ll see on the big screen this year, and if it wins Chazelle a raft of Oscars in 2017, it won’t be without reason. Knowingly and defiantly nostalgic—but strikingly modern—La La Land is a film of almost unparalleled exuberance.