Sequels often try to replicate the experience of the original, without feeling like a stale retread. They often have bigger budgets, but many shamelessly rehash what we’ve seen before on a grander scale. Some of that’s abated in recent times, with the rise of prequels focusing on backstories, complete narrative trilogies, and interconnected ‘universes’ of films, but the old-fashioned Hollywood sequel is alive and kicking. And for as much as people adore Terminator 2: Judgment Day (1991), few will deny James Cameron essentially remade The Terminator (1984) on a bigger canvas.

The Terminator franchise has offered a tumultuous viewing experience. Terminator 3: Rise of the Machines (2003) was a belated sequel that brought nothing new to the table, rehashing a rehash without the wit and invention of its predecessors. Terminator Salvation (2009) was a noble attempt to shake free of the status quo, eschewing Arnold Schwarzenegger (who only “returned” as a digital cameo), but setting the story in the wartorn future avoided what everyone liked about the basic idea of time-travelling cyborgs from a future hell invading a present ill-equipped to battle them. Terminator Genisys (2015) attempted a “soft reboot” by following a new timeline, where the events of The Terminator went a different way, but most people just weren’t interested in following an alternate universe. 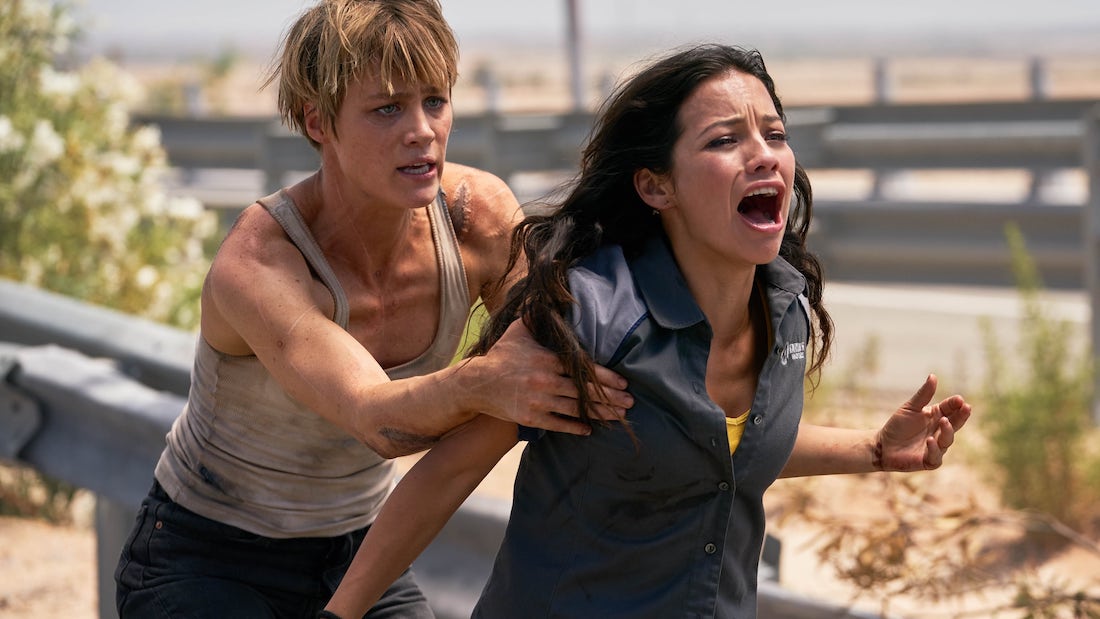 Terminator: Dark Fate offers another roll of the dice, hoping to lure back audiences and please fans with a direct sequel to Terminator 2 that ignores the previous three efforts. That’s becoming a popular way to continue popular franchises that went awry, as Halloween (2018) did much the same, and Dark Fate likewise brings back its original leading lady as a sign audiences can take this instalment seriously. One might even call it the “Sarah Connor Trilogy” now, as the sixth Terminator movie confirms Linda Hamilton was always the beating heart of Cameron’s vision—and Arnold Schwarzenegger just looked cool on the posters in leather and shades.

Cameron’s back as a producer for Dark Fate (he also helped with the story, alongside another four credited people), but he didn’t write the screenplay. The film is being partly sold on the idea the genius behind the first two films is back, but who knows how hands-on Cameron was in reality—as he was deep into his work on the Avatar sequels. Tim Miller (Deadpool) is the man entrusted with reviving Terminator for a new generation, which is quite a task for a man who’s only directed one movie before this. Did he pull it off? 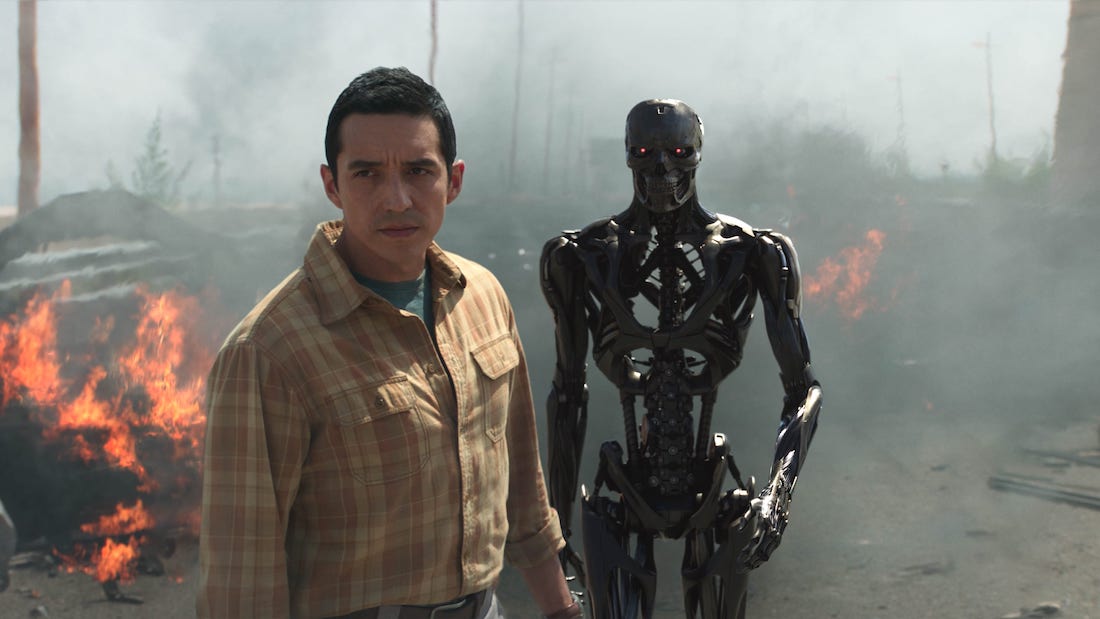 For the most part, yes. It’s undeniable Terminator: Dark Fate is the most entertaining sequel since T2, working in a similar way to Star Wars: The Force Awakens (2015) in how it’s essentially a remake that finds a logical way to get Sarah Connor and the iconic T-800 involved. Those characters are this movie’s “Han Solo” and “Leia”, respectively.

Of course, this means it’s susceptible to the same criticism The Force Awakens faced, from those bemoaning the fact it’s not offering much new and follows predictable story beats. But I think there’s enough here to keep longtime fans interested in its flourishes. And if you never grew up with the older movies, so perhaps don’t hold them in such high regard (unimaginable, right?), then you may even find Dark Fate’s more attuned to your modern sensibilities. It’s certainly able to do more than T2 on a visual level, thanks to $200M-worth of VFX and some imaginative ways to portray how lethal these robots and cyborgs can be. 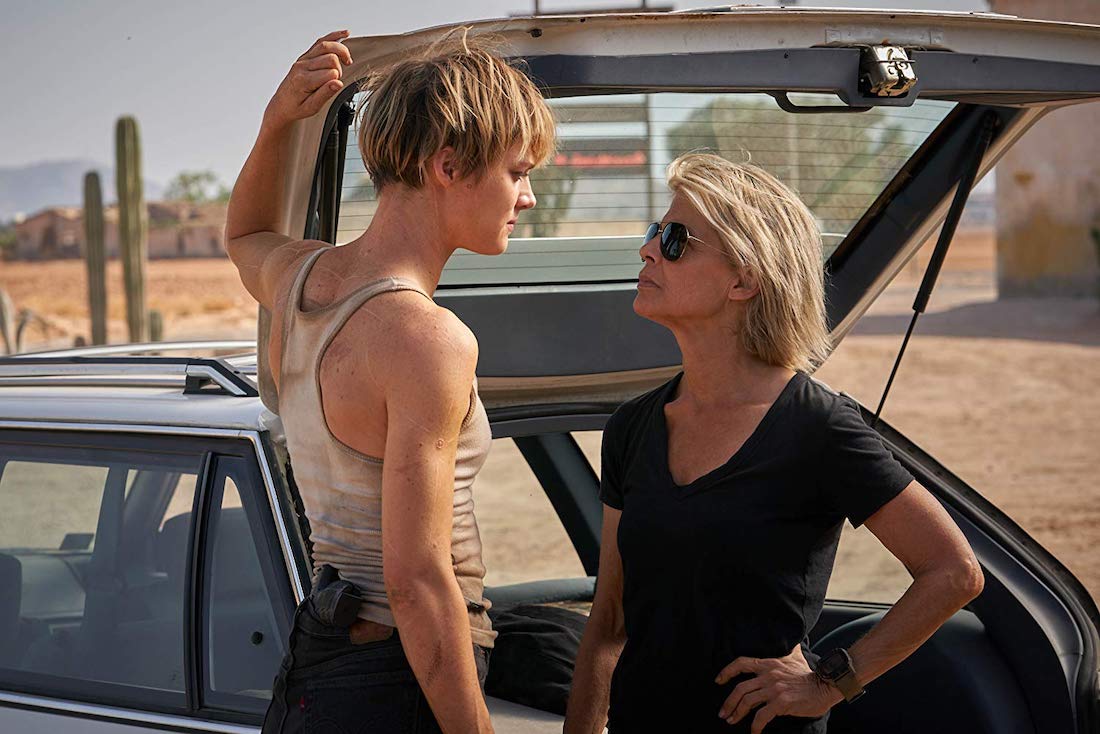 One might say Dark Fate offers a remixed experience. There’s another deadly cyborg from the future—a “Rev-9” (Gabriel Luna) that can separate itself into two independent forms (one liquid metal, one a carbon endoskeleton)—who’s been sent back in time to terminate a young Latino woman called Dani Ramos (Natalie Reyes). A human has also been sent back to protect Dani—an “augmented” woman called Grace (Mackenzie Davis)—who can kick serious Terminator butt for brief periods before she needs to recuperate and take meds. It’s a familiar setup to the ’84 original, but matters are complicated—perhaps unnecessarily?—with the return of Sarah Connor (Hamilton) as an unexpected ally of Dani and Grace from across the US border. She’s now an aged remnant of a timeline that’s been neutered but replaced by a similar apocalypse. Inevitably, the familiar T-800 (Schwarzenegger) also returns, but to say how would ruin the few surprises Dark Fate has up its sleeve.

Dark Fate plays like a do-over of The Terminator, only this time mostly set in Mexico, with a Latino factory worker instead of an American waitress as a more lethal Terminator’s target. And yet it can’t ditch the ingredients that made the franchise so popular, so it strains to find a way to get Sarah and another T-800 involved. The story just about justifies Linda Hamilton’s return as Sarah, now as a world-weary “Terminator hunter” struggling to find a new place in a situation where she’s no longer the exalted mother of a future saviour. She’s instead a rather tragic loose end; an unrecognised figure by anyone from a different but no less terrible future. The T-800’s role in events is less interesting and oddly played for laughs most of the time, while also relying on an emotional backstory set-up in the film’s opening minutes. 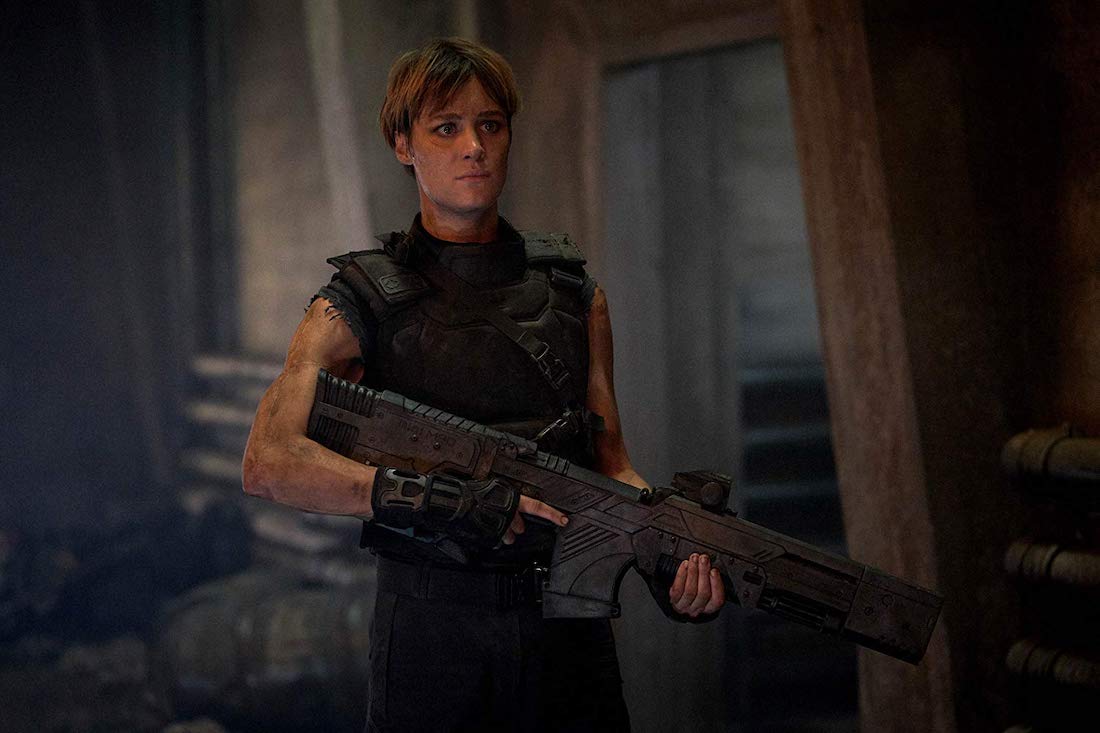 And if you want to get geeky, some of it doesn’t even withstand scrutiny based on things we’ve learned in the first two movies—like how Terminators can only learn to become human after “brain surgery” on its CPU.

It’s great to see Hamilton back in her signature role after so many years away from the spotlight, purposefully avoiding the other sequels, but her return means the focus of the story never sharpens around Dani and Grace. Those characters are this movie’s “Sarah Connor” and “Kyle Reece” (without the romance or bootstrap paradox) but, after a promising start, they cede ground to the franchise’s star names. Dark Fate should have spent more time on Dani’s emotional arc, in particular, to make us grasp her character and her purpose, but attention switches to Sarah too readily and Dani ends up feeling like a hanger-on in her own story. And that’s a problem when, in the final act, we’re supposed to feel a deep connection to Dani and the “dark fate” that lays ahead for her and Grace. The groundwork juts isn’t there, sadly. Too much time is snaffled away by Sarah and, eventually, the T-800 making dry quips. 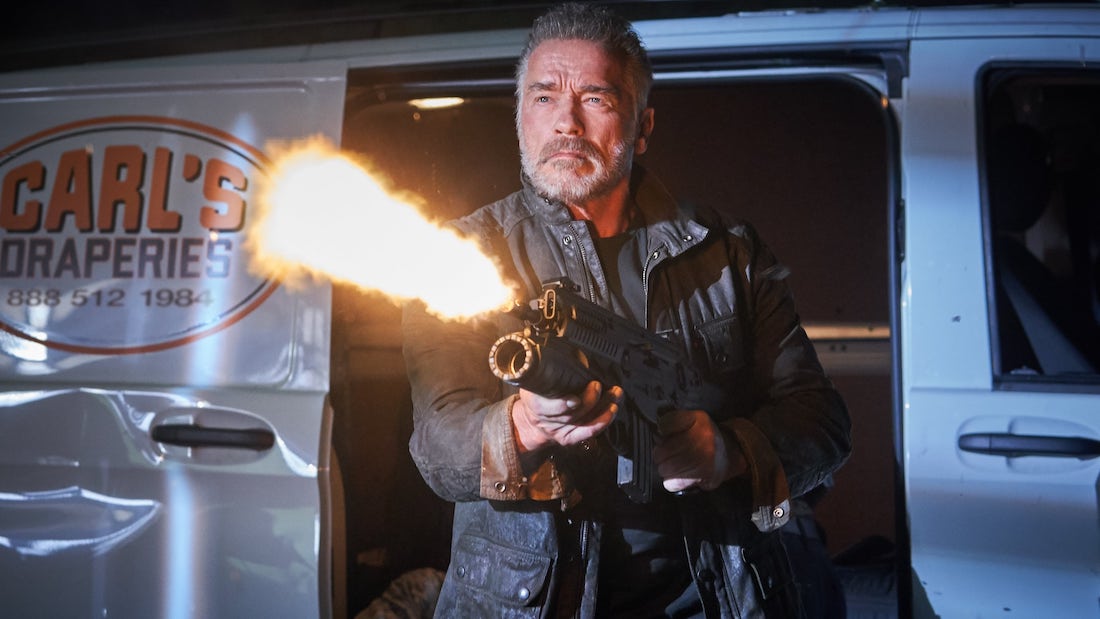 As one might expect, the VFX is excellent and Miller’s eye for well-staged action sequences help make Dark Fate an edge-of-your-seat thrill at times. The opening twenty-minutes are particularly high octane and entertaining, with some aggressive fights and another solid entry in the franchise’s many chase sequences. The problem is that, in the final stretch, the story dissolves into excuses for more chaos and carnage, with bigger stunts involving a C-5 cargo plane and more fights in and around a dam, which ends up feeling a little wearying. By that point, it’s clear the movie has somewhat fumbled Dani’s character and the, to some extent, the return of the T-800, so it’s difficult to care. But it’s never boring. I just regret the loss of the original movie’s darkness and realistic dread. You felt sick whenever The Terminator appeared in the original, or tense whenever the T-1000 loomed into view its fixed stare, but Dark Fate is more like a theme park ride. Once the Rev-9 starts leaping and scuttling about, physics be damned, my interest in him as a villain started to wane——no offence to Gabriel Luna, who generally does a good job combining what Robert Patrick and Schwarzenegger brought to their villains.

The real star of the show is Mackenzie Davies, as it’s a surprise to see her in such an action-oriented spectacle. She first came to my attention as a rebellious computer genius in AMC’s Halt and Catch Fire, then more people started casting her in things like the Emmy-winning “San Junipero” episode of Black Mirror, or as a replicant in Blade Runner 2049 (2017). Dark Fate’s an unusual job for her to take, perhaps, but she’s the best thing about the movie. Smart, capable, convincingly able to whup a Terminator’s ass, it’s just a shame her and Dani’s story gets overshadowed by Sarah Connor’s return. 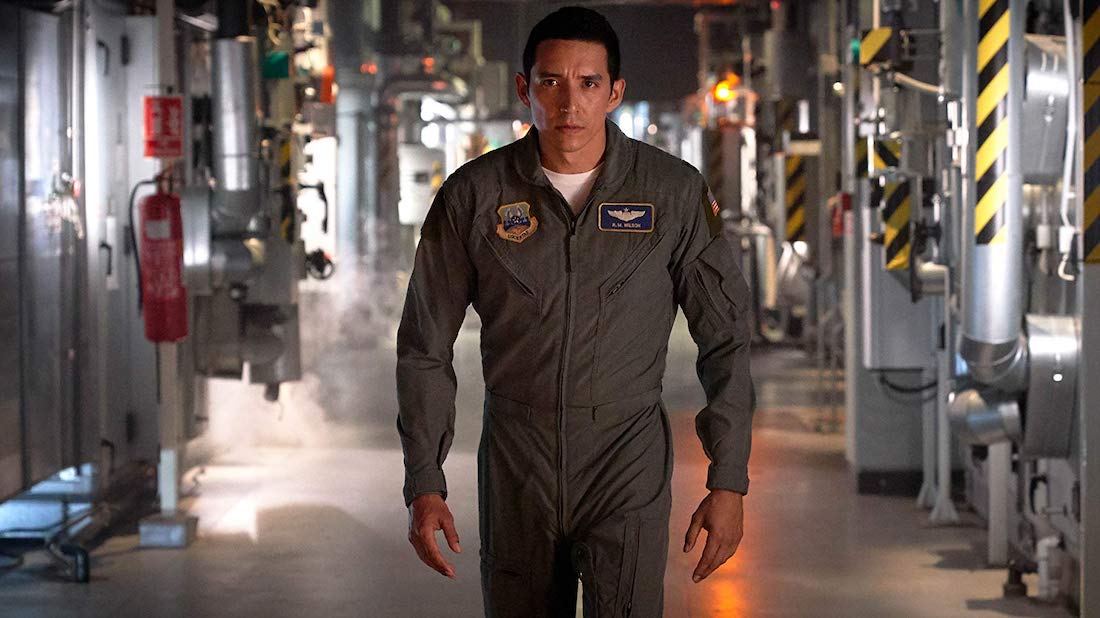 Still, Terminator: Dark Fate is a decent entry into this sci-fi franchise. It’s the only sequel since T2 I’ve enjoyed without too many caveats, and I’d watch another instalment this film clearly teases. I also appreciated some of the political choices, like having an “illegal alien” from “across the border” be humanity’s new saviour (there are even action sequences at the border wall and inside a detention camp for Mexicans crossing into the US territory), and it doesn’t completely give in to having Arnie rattle off his famous lines. It actually avoids them, to sometimes frustrating effect—like a scene where the T-800 considers putting on shades to compliment his leather jacket.

It doesn’t get everything right and some of the character’s arcs get overshadowed by the bombastic action and Miller’s desire to give Sarah Connor a big enough role to lure Hamilton back, but this is a “Terminator 3” that feels like a well-intentioned way to continue the story… while adapting it for a new time and not letting it feel like a cynical cash-in on the brand. 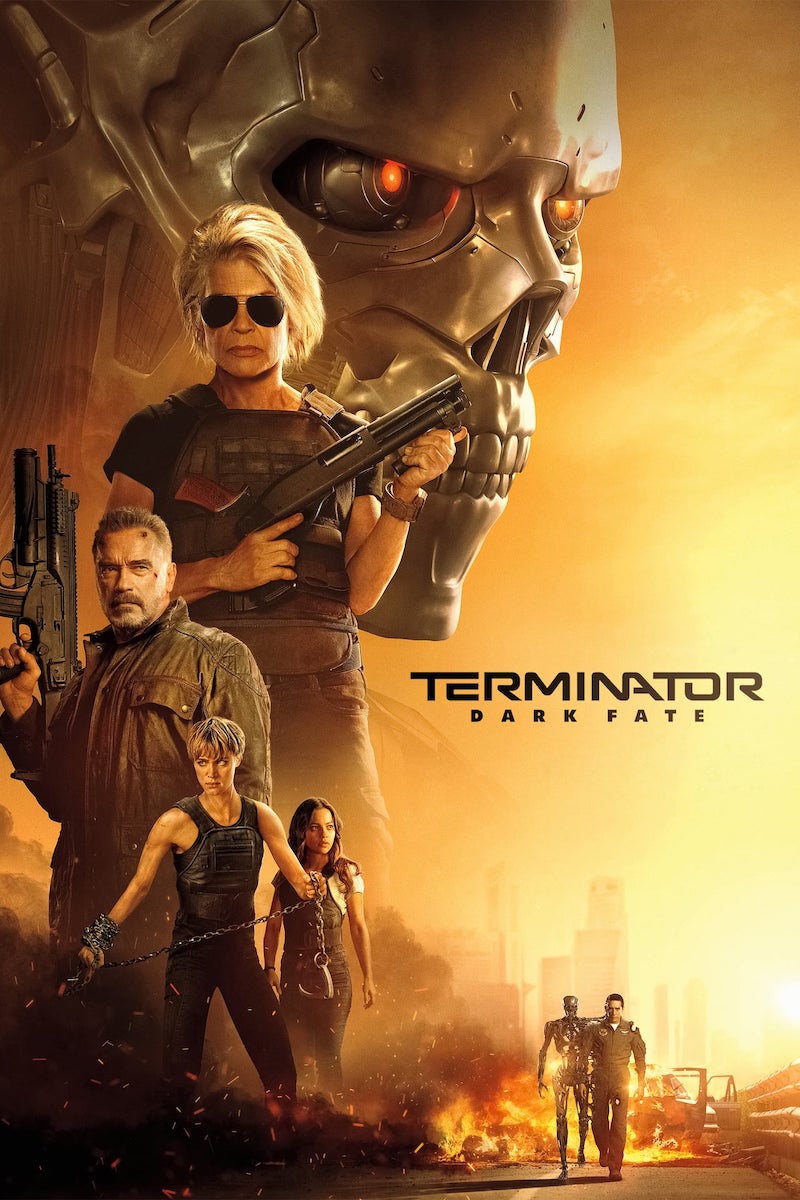