How you feel about “San Junipero” will ultimately come down to what you think about the ending. Do Yorkie (Mackenzie Davis) and Kelly (Gugu Mbatha-Raw) end up happy ever after in a Belinda Carlisle-soundtracked ‘heaven on earth’, or is the truth more complicated that that? More importantly, is it believable that Kelly would make that final choice, and could she really hedge her bets in the way that the closing minutes suggest? Or is this a rare example of a Black Mirror story where Charlie Brooker puts happiness first, opting for sentimentality over realism? If so, does it really matter?

Tonally, “San Junipero” is easily the most joyful episode, not only of this series of Black Mirror but also the previous two. Kicking off in a perfectly recreated 1980s coastal town, the opening minutes allow Brooker to have a great deal of fun sending up the ’80s. There are references to The Lost Boys and The Breakfast Club, and some very on-the-nose song choices (“C’est La Vie”, “Girlfriend in a Coma”, “Can’t Get You Out of My Head”). Cleverly, San Junipero, with its wide avenues, its arcades, and its bustling nightclub Tuckers, always feels like a simulacrum of the ’80s; a movie set rather than reality. And as the episode plays out, we slowly realise that’s because it is… 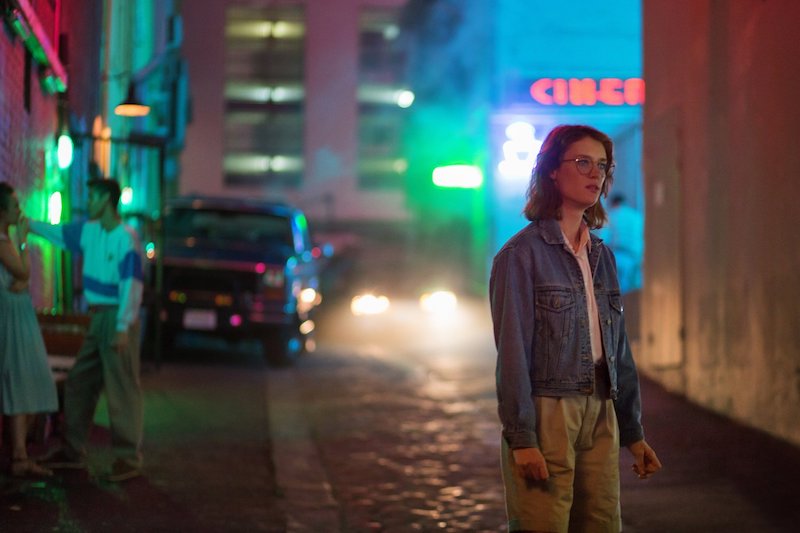 Our heroines are the aforementioned Kelly and Yorkie; two bright young things who meet-cute in Tucker’s, have a one night stand that promises to turn into something more, and then gradually try and turn their chemistry into a more permanent thing. Except, there are problems (aren’t there always in Black Mirror?). Neither woman is quite what they appear to be, and, consequently, their romance isn’t as it first appears either. San Junipero isn’t simply a virtual world, it’s a virtual heaven; a place where the terminally ill, the suffering, or simply the old or despairing, can sign up for euthanasia and pass over, living out a virtual reality in the decade or decades of their choice.

In the real world, Yorkie is an elderly gay woman who’s been paraplegic for 40 years, after an argument with her parents on the night she came out at 21 led to a terrible accident. The show strongly hints that she’s never known romantic love, that her feelings for Kelly are driven by the heady power of first love, that overwhelming feeling of falling for someone with all the intensity of youth. By contrast, Kelly has been in a happy marriage for over 40 years. Now sick herself, she has buried both her husband and her daughter, the latter tragically young. San Junipero, for her, is a temporary escape from the pain of life and living; while for Yorkie it’s a symbol of all the freedom she’s never known and a place she might finally call home.

Given the fundamental gap between these two experiences you’d be forgiven for thinking that Brooker intends to deliver us a hammer blow of a love story, breaking our hearts into smithereens at just the moment we’re beginning to care. There are moments he almost does so. When Kelly confronts Yorkie and tells her “the bond, the commitment, the boredom, the yearning, the laughter, the love of it, you can not know” it’s probably the film’s most powerful moment. As is her acknowledgment that Richard didn’t leave her when he died… instead, he chose their daughter over San Junipero’s charms.

And how strong are those charms in reality? The very existence of the Quagmire club, with its bored strangers writhing against each other, and trying a spot of Autoerotic Asphyxiation in the hope of finding something new to feel, suggests that even the virtual afterlife fades into a purgatory of boredom after a while. Yorkie sees San Junipero as her passport to Paradise, but what happens in Heaven once the shine starts to wear off? 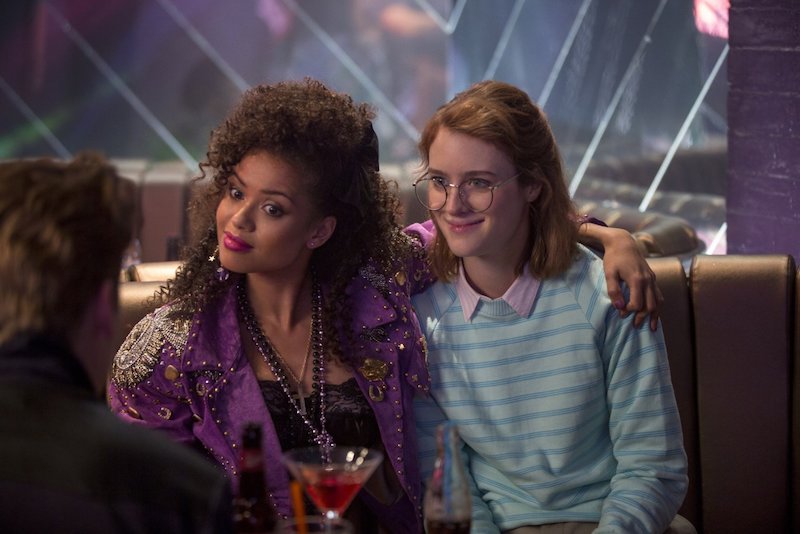 It’s an interesting question and one Brooker’s clearly ambiguous about. Technology is always a double-edged sword in the world of Black Mirror, and there is a bittersweet pall hanging over all the action of this episode. Even the happiest moments (the wedding, the moment when Yorkie finds freedom in the sand, the two women laughing and dancing in the club) carry a sharp tang of despair, the acknowledgment that nothing is quite as lovely as it might seem.

But at the last moment, Brooker appears to hold off on pulling the trigger. After their cathartic argument, Kelly decides the time is right for her to die, too, and it’s here that things get really interesting. We see Kelly buried alongside her husband and daughter—but, in a coda to the action, we see her too driving in Yorkie’s red car, Belinda blaring out, and dancing in Tucker’s with her new love once more. Does Kelly really choose to join Yorkie and live happily ever after in this show’s only happy ending? It’s possible, but it’s also arguable that that might not be the case. That the real ending is the one in which she is buried with her family and the other a simulacrum that Yorkie has dreamed up her own rose-tinted ending to fit her newly perfect world.

And is it really a happy-ever-after, anyway? Can Yorkie and Kelly truly be together forever in a world that never ends? Can a relationship that began in a dream last in a bubble? Where does Kelly’s 40 years speech fit in this? Is her relationship with the Richard the real one and this the fake? Or is this the real Kelly free in the virtual world to follow her urges and dance with her girlfriend and create a second life.

I’d say that the key line comes early on when Yorkie first visits Tucker’s club and plays the arcade game. “It’s got different endings, depending on if you’re one or two-player,” remarks a passing ’80s nerd. And so, too, does San Junipero. There’s the ending where Yorkie dies alone and still finds joy in San Junipero without Kelly, while Kelly herself chooses to die and join her family in their plot. That’s the one player game. In the two player ending, Kelly finds Yorkie and joins her on her journey and they live happily ever after having beaten the odds.

As to which is the real ending in this clever, moving, warm, and deeply humane hour…. well, as with all the cleverest games, I’d say that’s up to you to decide.