Who would’ve thought the best blockbuster in cinemas this summer would hail from 1991? That’s just the situation we’re in. We’ve had a few good movies this summer (Spider-Man: Homecoming, War for the Planet of the Apes), but how many of recent years would warrant a re-release on the big-screen 26 years later? That’s what James Cameron’s seminal Terminator 2: Judgment Day (hereafter T2) has been granted, by virtue of a remastering and 3D presentation so beloved of its filmmaker.

Often regarded as one of the greatest films in blockbuster history, T2 set a high standard that countless films have tried to match in the decades that followed. The Terminator franchise may have suffered this century, with three sequels ranging from redundant (Terminator 3: Rise of the Machines) to the downright abominable (Terminator Genisys), but the original and its immediate sequel are still two of the  best sci-fi action films ever made. With many of today’s fans too young to have seen it in cinemas back in ’91, this re-release feels like an unmissable chance to see T2 where it was intended to be shown. 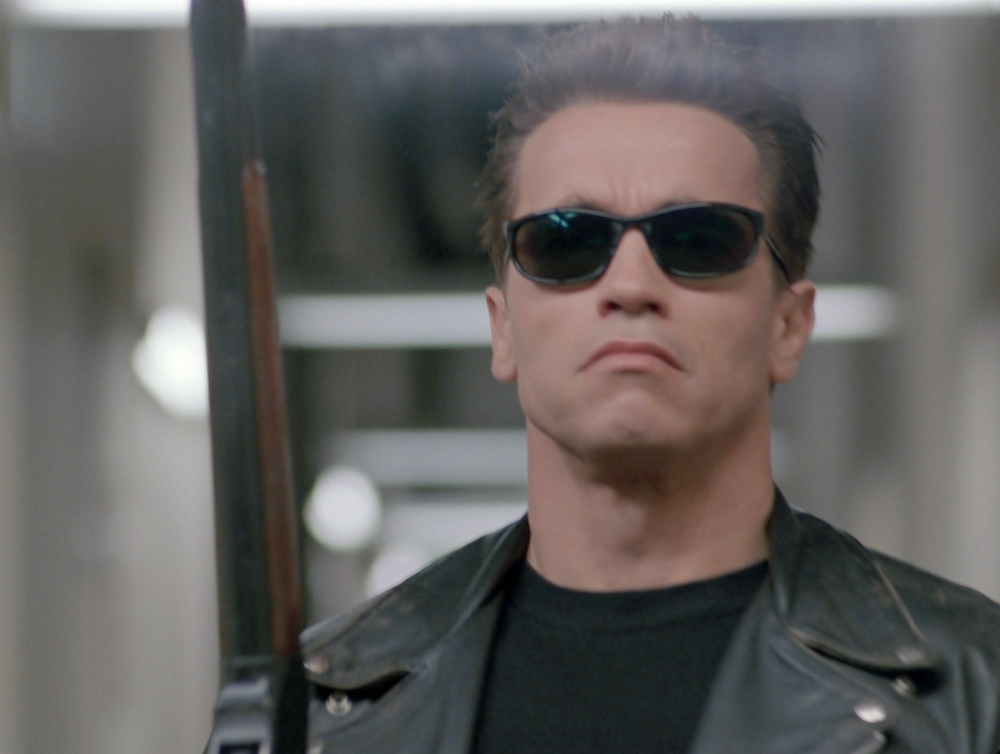 The story, as if you didn’t know, concerns the future of the human race. Robotic assassins known as Terminators are sent back in time to kill a 10-year-old John Connor (who will eventually lead a human resistance against robot kind in a future war started by an artificial intelligence known as Skynet). Where Arnold Schwarzenegger’s Terminator was the villain of the first film, here the taciturn T-800 returns as a reprogrammed saviour, protecting John and his battle-worn mother Sarah (Linda Hamilton) from a more advanced model: the deadly T-1000 (Robert Patrick, giving an iconic performance of icy menace).

Switching the overt horror of The Terminator (1984) to a more crowd-pleasing actioner irked some fans, who preferred the original’s simplicity, but in so-doing, T2 successfully altered a winning formula. Just like Cameron’s approach to making Aliens (1986) after Ridley Scott’s Alien (1979), T2 is a different beast to the original, but one that feels like a true sequel, set within the same world, to continue the same story. And it holds up pretty damn well in 2017.

For a start, the retrofitted 3D is absolutely phenomenal. It might’ve been tempting to throw in stereoscopic gimmicks to distract us, with the T-1000’s liquid metal swords flashing out during every scene, but Cameron instead focuses on giving the film a greater sense of depth. On the whole, the changes made to the film are very subtle, and lend the film an added visual richness. The remastering also brings the 1991 release into the modern era. The picture is so crisp and clear, it could’ve been filmed yesterday. The sound is also very notable, as every scrape of metal, whizzing bullet and explosive bang is deafening in the best way. Combined, it all makes for one hell of a cinematic experience – one that hasn’t lost pace with contemporary summer fare.

What’s really striking, though, is how the action feels. T2 is noted for being a film that marked a quantum leap forward in computer generated imagery, with the T-1000’s shape-shifting abilities astonishing ’90s audiences. And they still looking pleasingly freaky today, despite the liquid metal effect not being quite as photorealistic as you remember. Thankfully, this actually adds something to the character’s uncanny nature. But while T2’s noted for its impressive digital effects, what’s now more obvious than ever is the lack of greenscreen compositing.

Winding back a few decades, it’s remarkable how authentic the action sequences feel. Take the big motorcycle chase near the beginning, which was shot on location in one of Los Angeles’ flood control channels. Using real vehicles with real stuntmen driving them makes for an incredibly visceral experience. The suspension of disbelief we experience in most Hollywood fare today is banished entirely because what we’re seeing is undeniably, satisfyingly real; whether it’s a stolen truck careening across the city, or the models and prosthetics used to create the cyborgs themselves.

Hamilton’s Sarah Connor remains a tough and very capable female hero, in the Ellen Ripley mold, while Schwarzenegger displays a level of cool it’s easy to forget he once possessed. As the young lead, Ed Furlong fares less well than the adults. He’s quite adept in some instances, but in others simply yells his dialogue in an amateurish way. And while much of T2 hasn’t really dated over the years, the exception lies in John’s use of slang and phrases.

If you’ve somehow never seen Terminator 2: Judgment Day, it’s essential to see it on the big screen. You’ll discover the blueprint for a hundred other action films that followed. And if you’ve been a fan since the ’90s, and aren’t sure you need to sit through it again, then Cameron’s exquisite remastering in 3D is absolutely worth your time. The pacing may sag in the slower middle act, but T2 boasts an iconic hero, a legendary villain, and some aggressively wonderful action sequences.

The Terminator’s catchphrase is “I’ll be back”, and having this franchise back in multiplexes makes for a very welcome return.