Naturally, there’s going to be added curiosity about Spider-Man: Far From Home (hereafter Far From Home) because it’s the Marvel Studio movie fated to follow box office behemoth Avengers: Endgame (2019). That’s probably just as well because, otherwise, there isn’t much here to get excited about, particularly as it has to follow the sublime Spider-Man: Into the Spider-Verse (2018). It felt fresh to see Spider-Man slickly animated like a real comic-book, whereas there’s no avoiding the fact Far From Home’s the seventh go-around with a live-action Peter Parker. What’s the big sell beyond curiosity about Endgame’s fallout, exactly? Spidey in Europe? Tough one.

Some of Far From Home’s burdened with having to mop up Endgame. And it does a serviceable job explaining how everyone’s handled the so-called “Blip” when half the population unexpectedly reappeared after Thanos “snapped” them out of existence in Avengers: Infinity War (2018) five years ago. It’s fertile ground to explore, but understandably this movie doesn’t have time to get into all the ramifications. What if you re-married and had kids and then your first wife literally returns from the dead? 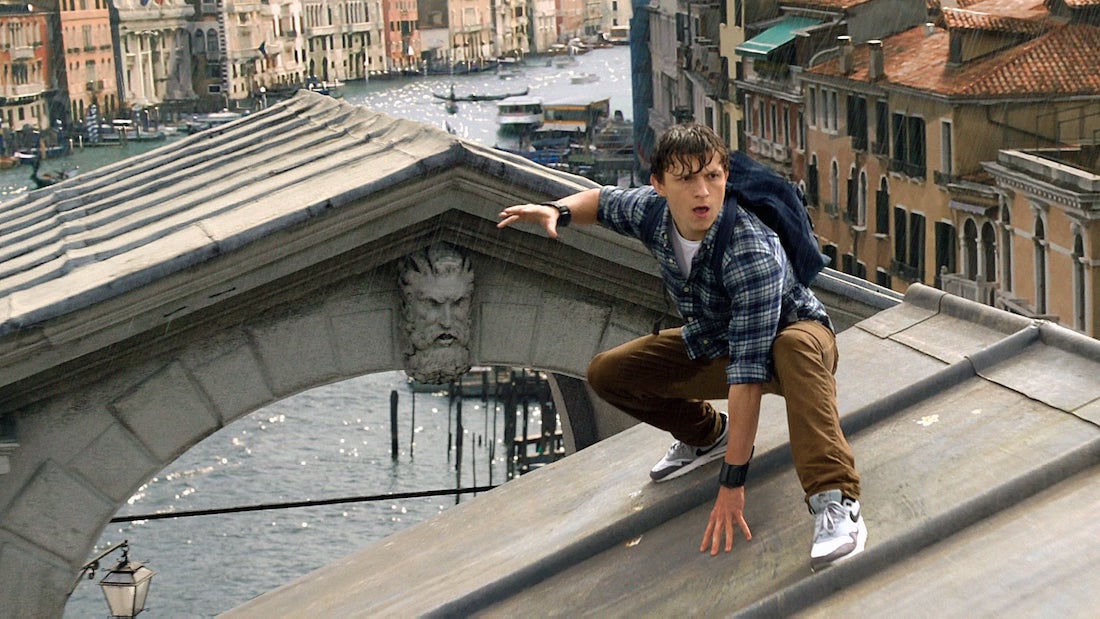 If you loved the sojourn to the Washington Monument during Spider-Man: Homecoming (2017), this adventure takes the field trip thousands of miles further. Peter’s (Tom Holland) off to Europe with his classmates, including best-friend Ned (Jacob Batalon), where he intends to ask his beloved MJ (Zendaya) out on a date when they reach Paris. Unfortunately, his personal concerns are again put into conflict with a bigger world threat, when a water-based “Elemental” creature appears in Venice, along with a new superhero wearing a ‘goldfish bowl’ helmet later christened “Mysterio”/Quentin Beck (a committed Jake Gyllenhaal) by Italian TV. And it seems that Nick Fury (Samuel L. Jackson) wants Spidey to help stop future attacks, by partnering with inter-dimensional Mysterio to defeat these creatures. So while all Peter wants to do is enjoy his vacation and get a girlfriend, with the world in need of a new Iron Man and Tony Stark having apparently made Peter his successor, is it time to accept his life as a superhero will never be normal?

After enjoying the punk attitude of Homecoming, my expectations were nevertheless lower going into this sequel because it couldn’t hope to be as fresh as seeing the first Marvel-made Spider-Man film. Also, Endgame’s nigh impossible to top visually and emotionally, so it felt like the best this could hope for is being an entertaining palate-cleanser like Ant-Man and the Wasp (2018). And that’s sort of what it is. I’m also not a fan of supervillain Mysterio, while the idea of large monsters based on wind, water, fire and earth didn’t seem very imaginative—although it’s an intentionally generic choice. 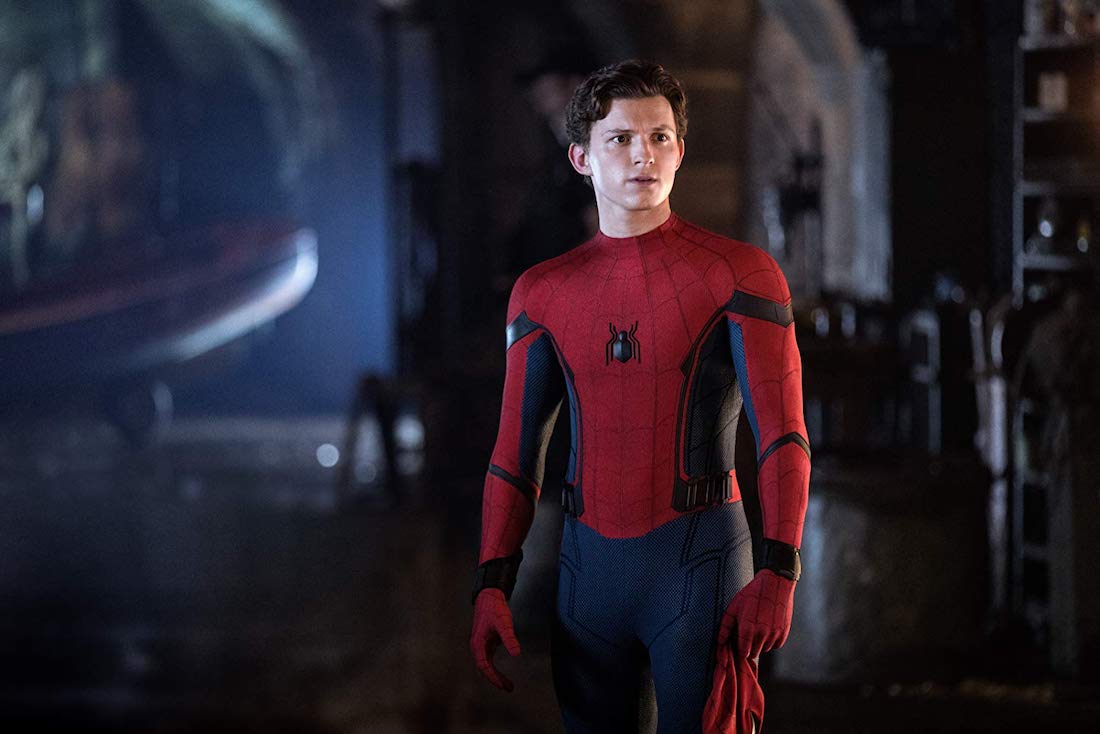 Having seen the movie, it does seem odd that Far From Home’s big twist is just establishing what comic-book fans already know of the Quentin Beck character. I’m sure there are plenty of people who don’t know anything about Mysterio (a third-tier villain of the Spider-verse) if they only watch the movies, but it’s nevertheless a disappointing “twist” that pales when compared to Homecoming’s handbrake turn.

With a cheesy-looking villain whose secret isn’t a secret to anyone with even mild interest and Wikipedia, Far From Home inevitably leans heavily on the comedy hijinks with Peter, Ned, MJ, Flash (Tony Revolori), and Betty (Angourie Rice). And while Tom Holland remains wonderfully charismatic and physically perfect as the lead, I wasn’t as enamoured with his friends this time around. This is mostly because due to the comedy being weaker and more obvious, relying mostly on teens being sarcastic. There’s even a tired visual joke where Peter gets caught with his trousers around his ankles, stood next to a statuesque Italian woman. Or another in poor taste when Peter accidentally, but hilariously(?), calls in a killer drone to destroy his coach and everyone aboard it. And this is the kid Happy (Jon Favreau) and Fury want to effectively lead the Avengers in Stark’s stead? Look, I love Spider-Man, too, but that’s a bad choice for this younger version of the character. Or premature at least. 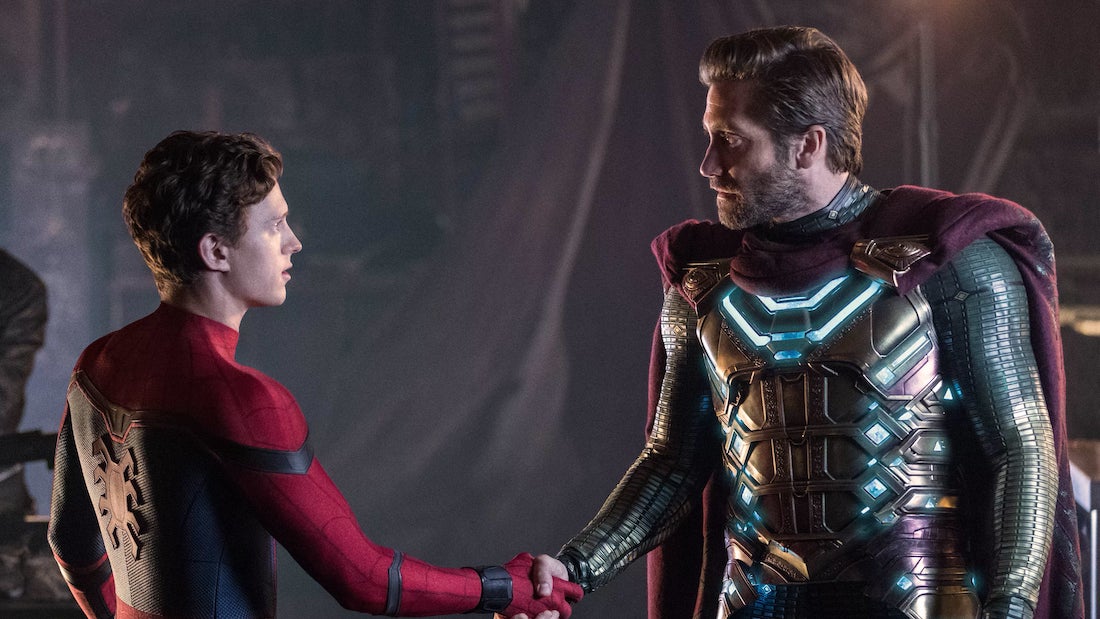 Chris McKenna co-wrote the screenplay with Erik Sommers, and while I’ve enjoyed his work on NBC’s Community and the previous MCU movies Homecoming and Ant-Man and the Wasp, something was definitely missing here. Not much of the comedy lands and the best moments are alternate takes of funny moments from the trailers. Well, with the exception of talk about the “Peter-Tingle”, which is hilarious and charming for far longer than it had any right to be.

Zendaya’s a more interesting ingredient to this film, now we know she’s MJ and destined to become Peter’s paramour. She playing the love-interest role very differently to Kirsten Dunst from the Sam Raimi’s earlier trilogy, most notably in a scene that sets up a fist-pumping reprise of Mary-Jane’s “Go get ’em, Tiger” line from Spider-Man 2 (2004)… only for Zendaya’s version to exhale like she’s bored. It’s amusing how different the approach is to MJ, now she’s cool and intelligent but very subdued and emotionally pokerfaced. She won’t ever fall into the screaming damsel-in-distress trap, and Zendaya has likeably chemistry with Holland… I’m just not sure if it’s a sexual one, as their first kiss lands with a thud and won’t be compared favourably to Spider-Man’s (2002) upside-down alleyway smooch. Most fans may have disliked Sony’s Spider-Man reboot with Andrew Garfield and Emma Stone, but few will deny those two had a rapport these MCU counterparts are sorely missing. 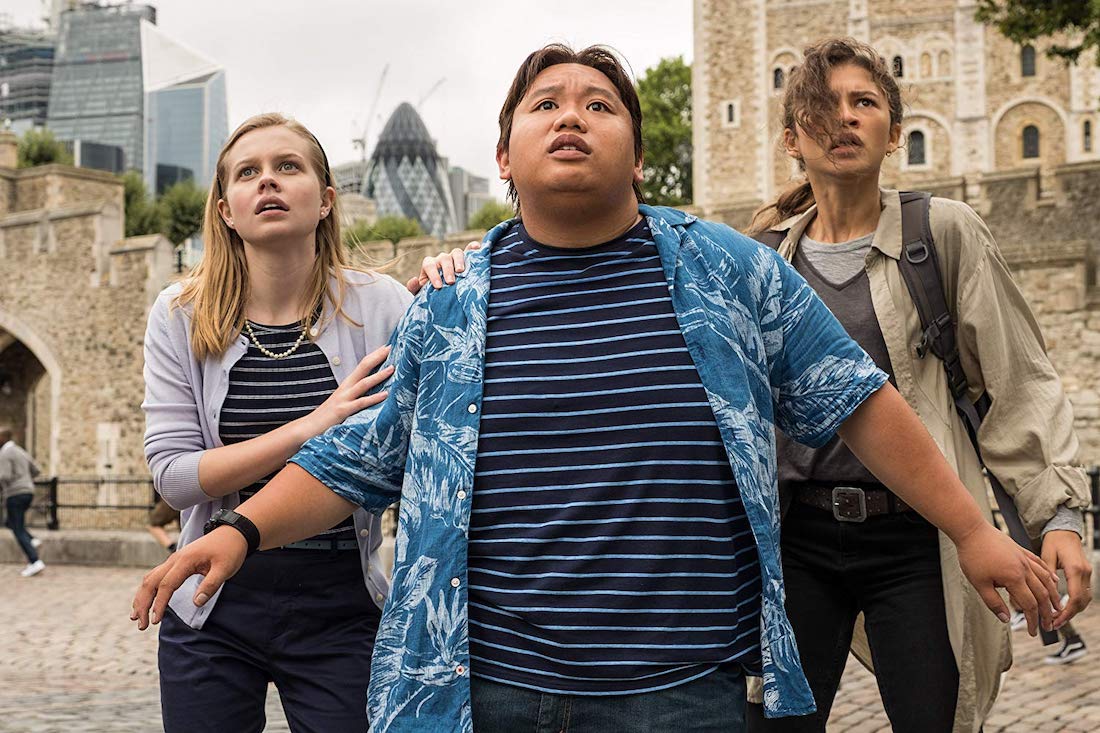 It’s clear the Spider-Man films are designed to work similarly to the Ant-Man ones, being their own comedic side-adventures that skirt the edges of the MCU’s bigger ongoing plots. It couldn’t avoid touching on Endgame’s repercussions and has nudged Spidey closer to becoming an integral part of The Avengers someday, but for the most part Far From Home is 129-minutes of beautiful foreign locations and serviceable action. The comedy’s amusing in some isolated moments, Holland radiates star-power, there are two joyfully creative “hallucination” sequences that capture the feel of a moving comic-book, but a lot of Spider-Man: Far From Home is comedically awkward, emotionally dim, and poorly paced. Samuel L. Jackson almost phones in his performance as Fury (although technically there’s even a reason for that), and I still have no idea what Mysterio’s goal was, so it’s of very mixed success when you look back on it.