If there’s a central statement from Denis Villeneuve’s captivating cartel crime drama Sicario (2015), it’s that the war on drugs will never be won. It’s a bleak view of a conflict, and a film that feels focused on the emotional cost of it all. It has a pervasive sense of hopelessness, giving many examples of how this is a sustained cycle of brutality and infighting, with no end in sight. It’s a dark, astounding film. It’s difficult to see why it needed a sequel.

But this is an age where even the most standalone of movies are mined for franchise potential, and so now we have a follow-up. This film loses the vision of Villeneuve (Blade Runner 2049), with new director Stefano Sollima stepping into his shoes, but it retains screenwriter Taylor Sheridan (Hell or High Water) for a story that once again looks at how far organisations are prepared to bend the rules in difficult times.

Sicario 2: Soldado revisits many of the original’s themes and goes bigger in the way most sequels do. However, it’s also impactful, interesting, and gripping enough to justify its own existence. Even the most sceptical viewer will find themselves surprised by just how much this works as a successor to the first film. What it lacks, however, is a singular human perspective, a sense of the emotional toll of this all, and the frustrating but essential moral murkiness of its predecessor. Instead, it trades that nuance for increased action. 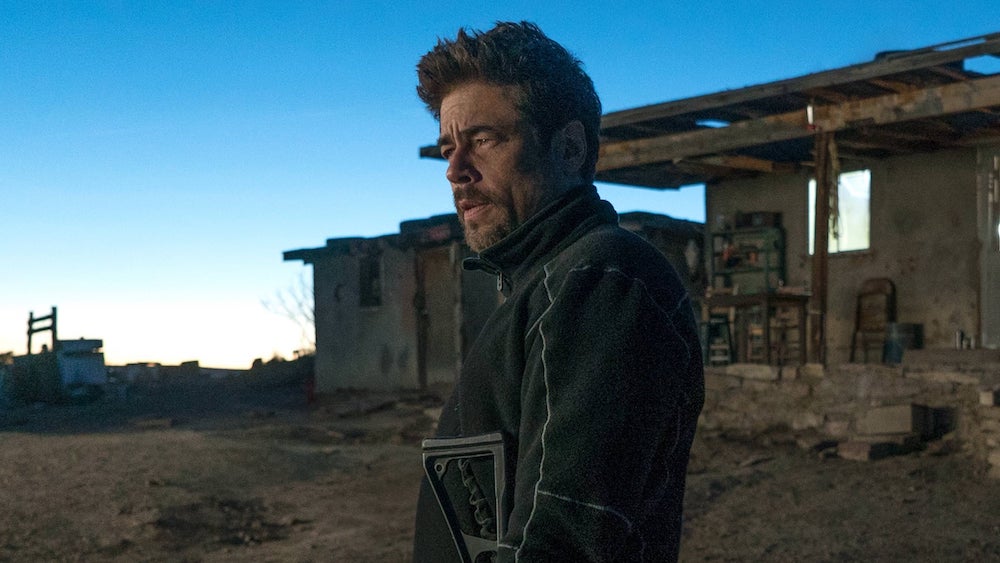 The plot kicks off with horrific acts of terrorist violence involving suicide bombers on US soil. When it’s revealed that one of these attackers got into the country from Mexico, it allows the political forces in the film to justify all-out war against the cartels that traffic people across the border. The US government looks to Matt Graver (Josh Brolin) to start a cartel war to take down the enemy, ostensibly because they fear more terrorists could cross the border. Matt recruits vengeful ex-lawyer Alejandro (Benicio Del Toro) to help him initiate this war, in a scheme that involves kidnapping the daughter of a cartel boss and pinning the blame on a rival outfit. The abduction of a child and how it’s handled is a serious moral grey area that the film really needs to explore more deeply than it does.

Brolin and Del Toro both return to their roles from the first movie, and both deliver tremendous performances. So, too, does young actor Isabela Moner as the captured girl at the heart of the film. It’s through her character, Isabela Reyes, that we view much of the ethically challenging material in the story. Rounding out the supporting cast are the likes of Catherine Keener, Jeffery Donovan, and Matthew Modine. It’s an impressive ensemble of actors, although it’s undoubtedly Brolin and Del Toro who carry the weight of the character development.

The story puts a lot of the emphasis on Alejandro’s reaction under serious pressure when the government’s plans go awry. Where the first film showed how he can be a terrifying and brutal attack dog when let off the leash by the US authorities, this film makes big steps towards humanising and deepening his character. It’s not like we can just forget how he killed people, including children, in the first film, though. This, thankfully, isn’t really a redemption arc, but it is about how an experience can affect a cold and calculating man. He clearly sees something of his daughter in Isabela, leading him to take risks he otherwise wouldn’t. 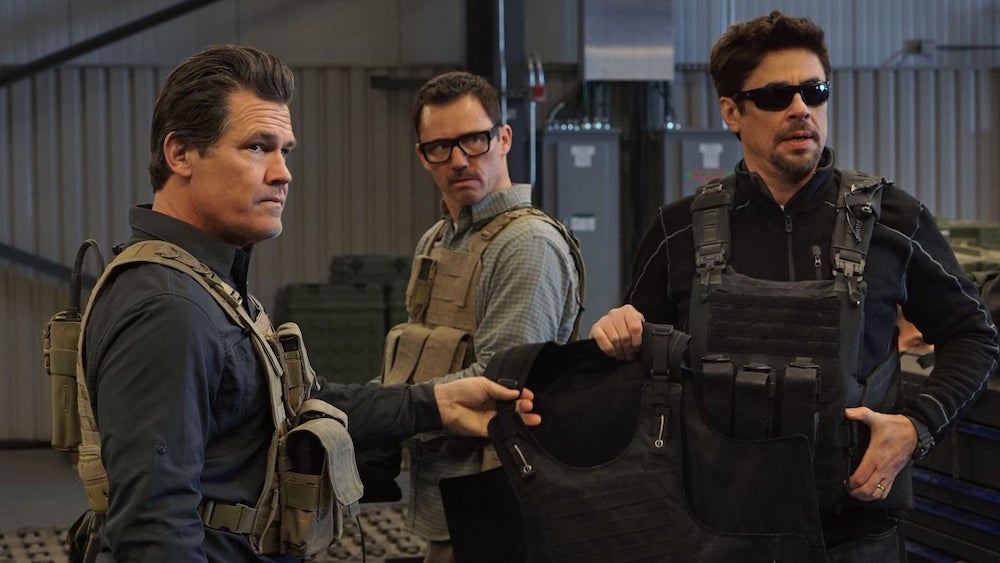 The first Sicario was incredibly intense and this one follows closely in its footsteps. Both movies portray the cartel struggle in Mexico as a war, and commit to making the situation and environment where the action happens feel like a true war zone. Scenes of terrorism and interrogations make this feel even more like a modern war story, and the simple colour palette and harsh feel of the original are retained. It may lack the exceptional eye of cinematographer Roger Deakins, but it still has its fair share of evocative and stunning shots.

Soldado isn’t as successful when it comes to adding complexity to characters on both sides of the border. It’s much more of a blunt instrument this time around. This is more a vehicle for action and shocking violence that also manages to sneak in topical themes and character depth, rather than the other way around.

It’s also a film where you’ve got to watch closely and pay attention to the details. If you’re not keeping track of what’s going on it’s easy to misunderstand things entirely. It’s about savagery and cruelty when it comes to the coyotes and the cartels, but in many ways, it’s far more about ruthless US military efficiency and the tenuous justification for violence, all mixed in with unexplainable terror and the exploitation of children to sustain a cycle of gang control. 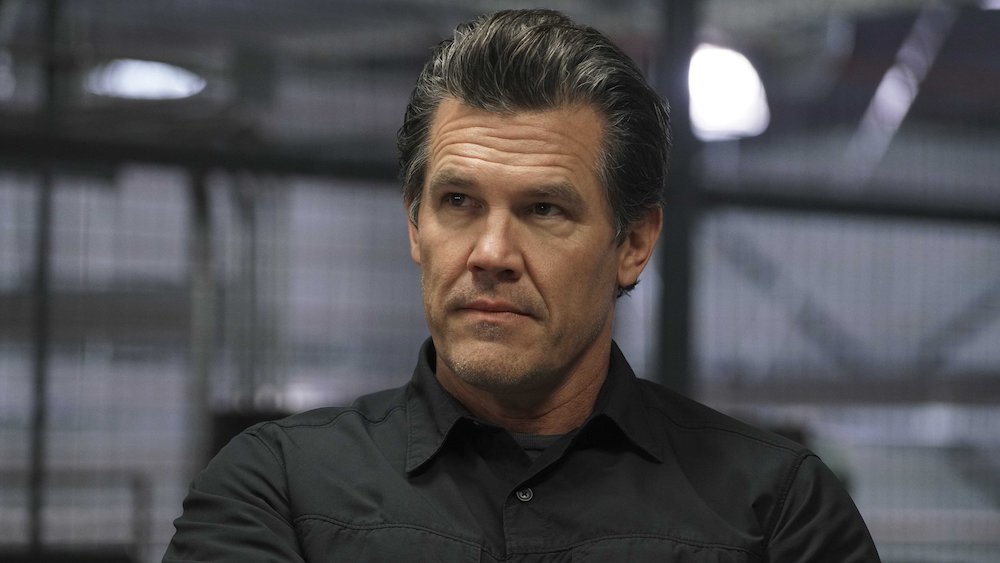 The violence in the film is gory and intense, as one would expect. There are scenes that push the level of distress and senseless brutality further than we’re ready for, especially when it comes to early scenes that show the actions of suicide bombers. A charitable reading would be that, while it’s difficult to watch, it’s all part of a plot line designed to upend expectations. A less charitable one would be that it’s needlessly macabre and unpleasant. It’s difficult to say which interpretation is fair, but viewers should brace themselves for horrifying acts that often aren’t shown onscreen.

One other element of the first instalment that’s maintained is the oppressive and challenging atmosphere. It’s key to its aims that the whole thing feels so enthralling and makes you feel like it’s constantly building to the next big shock. The late Jóhann Jóhannsson’s pounding score was so important to the impact and power of Sicario, and thankfully that percussive thumping beat and the high-tempo feeling is still in the sound of Soldado. Jóhannsson’s collaborator on Garth Davis’ Mary Magdalene, Hildur Guðnadóttir, takes over here and delivers a worthy follow-up soundtrack.

What Sicario 2: Soldado ultimately delivers is a compelling and impactful sequel with impressive action and a very strong cast. It’s a great movie, but it’s following an outstanding one, so it doesn’t quite match up. It doesn’t have the complexity or emotional perspective to make it work as well, and while it deals with a lot of moral quandaries, it’s more abstract and unfocused in its approach. Soldado is a gritty, violent drama that’s just about thrilling enough to make a case for its existence, but it unfortunately lacks the depth, relevance, and emotional consequences that made Sicario such a rare and extraordinary film.