After Avengers: Infinity War (2018) ended, many comic-book fans need something to cheer themselves up, so Ant-Man (2015) director Peyton Reed returns with Ant-Man and the Wasp, the perfect way to lighten the mood. Offering more minuscule madcap action and comedy, but with the addition of a winged female partner, this buzzing summer treat again proves good things come in small packages.

In the aftermath of Captain America: Civil War (2016), thief-turned-superhero Scott Lang (Paul Rudd) is suffering the consequences of his participation and currently under house arrest. Now able to spend more time with his daughter (Abby Ryder Fortson), while starting his own security firm with partner Luis (Michael Peña), Scott’s distanced himself from ‘Team Cap’ and seems to have put his superhero days behind him… 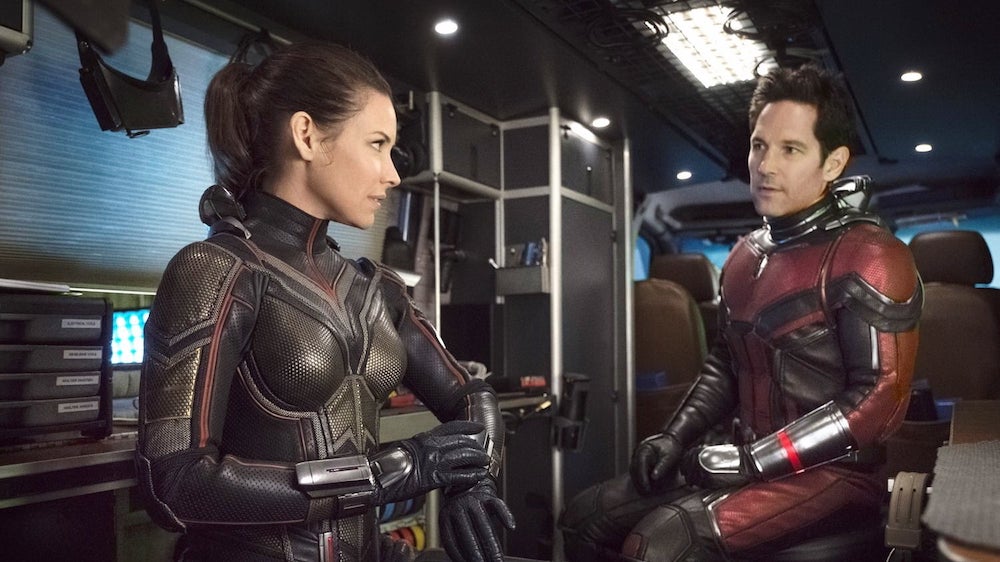 That’s until Scott’s forced to re-team with genius Dr. Hank Pym (Michael Douglas) and his daughter Hope van Dyne (Evangeline Lilly), after Hank realises Scott’s time in the Quantum Realm might be the key to saving his missing wife, Janet van Dyne (Michelle Pfeiffer), who was trapped in that microscopic universe decades earlier. So the trio embark on a dangerous new mission, encountering enhanced assassin ‘Ghost’ (Hannah John-Kamen) who can phase through walls, and is working for Hank’s old colleague Bill Foster (Laurence Fishburne).

Ant-Man and the Wasp is filled with infectious, goofy comedy performed by a talented cast. Paul Rudd (The 40 Year Old Virgin) remains a very appealing comic actor, armed with a winning combination of heart and humour. His deadpan expressions and deft comic timing flit charmingly between innocence and stupidity, but Scott Lang is also a grounded character because he has more everyday concerns and relatively normal friends. 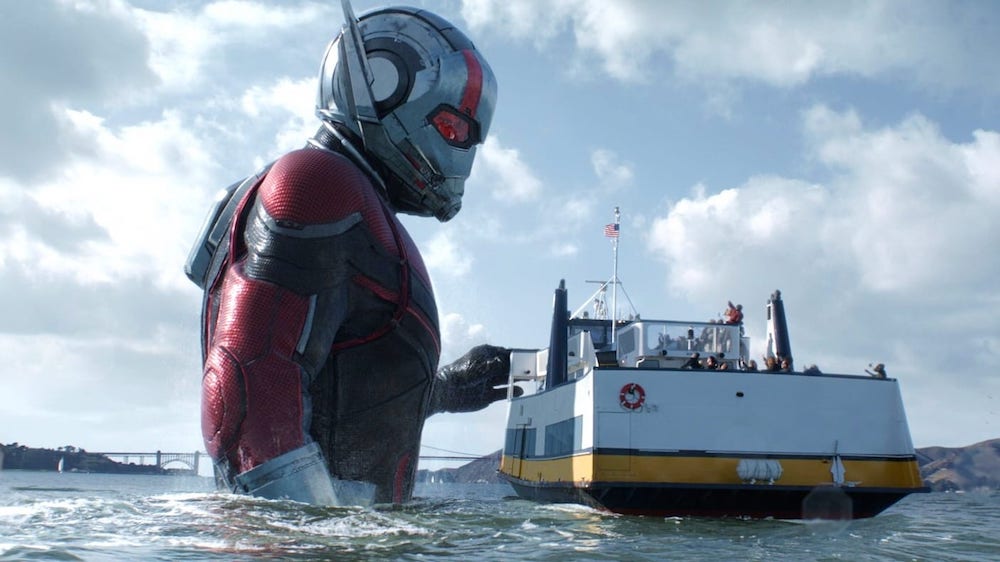 Evangeline Lilly (The Hurt Locker) finally gets to don The Wasp super-suit teased in Ant-Man and seizes her moment of equal billing. Adding a sense of skepticism towards superheroes, the chemistry between Lilly and Rudd helps balance the funnier moments, as she plays the ‘straight man’ to Rudd’s wise-ass. Together, they’re a  natural double-act. At the centre of the movie’s emotional arc, Lilly carries the bulk of the drama and holds her own in action sequences that establish Wasp as another major player for the MCU to utilise.

Stealing the show, again, is Michael Peña (End Of Watch) as Luis, Lang’s former cellmate and business partner. The character’s fast-talking, rapid fire monologues make a welcome return, making you hang on his every word while in fits of laughter. Along with a nattering debate about ‘truth serum’ and long-winded stories that lose their way, Peña provides excellent support as the prime source of silly humour. 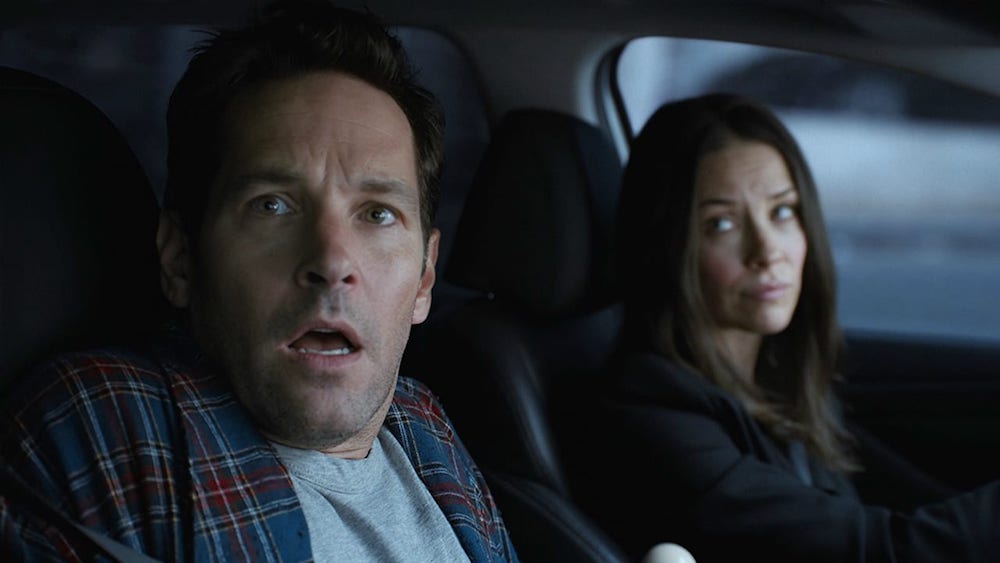 Proving the success of Ant-Man wasn’t entirely down to the valuable contributions Edgar Wright (Shaun Of The Dead) made before he infamously quit the project, Peyton Reed succeeds in making another oddball comedy with impressive action. He excels at exploring the comedic possibilities of altering the scale of both characters and objects, adding an Alice In Wonderland-style logic to everything that happens. Frequently shrinking and enlarging things within a scene, Reed has a keen sense of timing about when to stick with a character perspective during a size change, or when to let changes play out from a distance to add some drama or comedy. 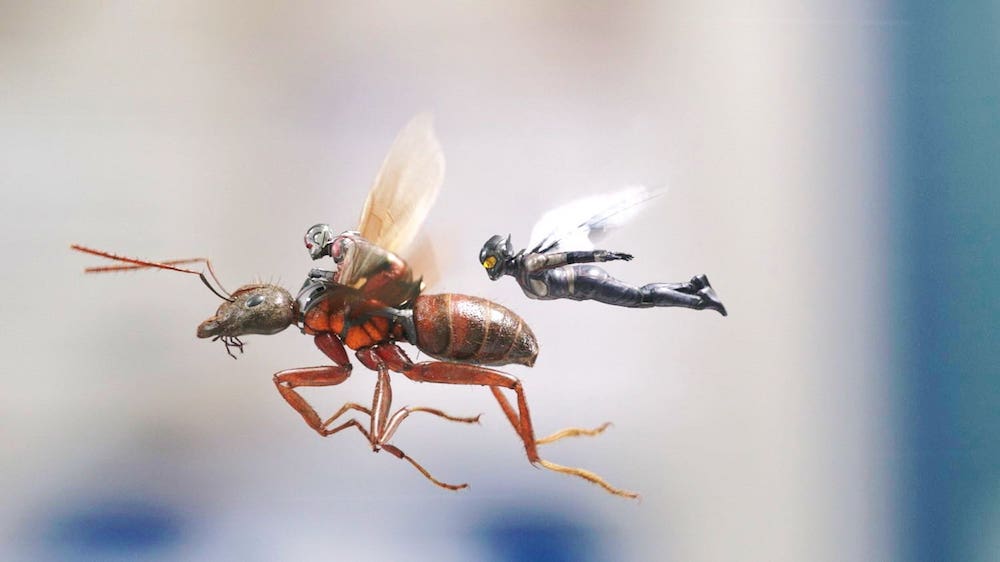 Marvel Studios recently raised the bar with memorable super-villains like Infinity War’s Thanos, Black Panther’s Erik Killmonger, and Thor: Ragnarok’s Hela, but they’ve set a new standard Ant-Man and the Wasp can’t quite match. Ghost offers a compelling motive for why she’s pursuing our heroes, and her past connection to other characters creates a nice conflict, but her sympathetic qualities are given too much focus and thus confuses audience reaction to her as a villain.

Still, there’s a lightness to Ant-Man and the Wasp because it’s another adventure where the fate of the world or universe isn’t at stake. Reed treats the material with a gentle touch, crafting a hilarious superhero movie that managed to overcome its thin narrative and sketchy villains through sheer likability.