When Halloween (2018) was released, together with cautious hope there was also a fair amount of scepticism. When a franchise has been limping along for so long, is it really worth keeping alive? And isn’t eleven too many entries for one series? These questions don’t seem to bother the folks at Full Moon Features, as Puppet Master: The Littlest Reich is the thirteenth entry in a series that began way back in 1989.

The long, exhausting history of Puppet Master is probably better suited to a hardback tome compiling its lore and mythology than a film review. Likewise, The Littlest Reich is better when taken on its own terms, as a clean slate rewrite of its own convoluted history. In that respect, it’s breezy and refuses to get bogged down in (or even explain) the 30-year backstory. The sell really is as simple as those two ridiculous words: Nazi Puppets. It’s the kind of mish-mash concept that horror’s always thrived on, as entries involving the elderly and the undead (Cockneys vs Zombies) and killer car tyres (Rubber) also prove.

Almost any horror or comedy that incorporates Nazism considers itself transgressive. But when it becomes clear how lazily Littlest Reich uses its central conceit, it begins to feel like the work of an edgelord teenager. The kind of adolescent who takes a controversial topic but has no idea how to subvert it, or at least make it interesting. Consequently, instead of making a point or humiliating fascism, they settle for prodding you with it and occasionally ask if you’re a snowflake. It’s a cheap trick, and applying it here makes these 90-minutes a chore to sit through.

It’s a shame, too, considering the potential and the talent involved. The revived Fangoria magazine are co-producers and, while it’s exciting to see them dip their toe into making movies, it’s a pity their first foray isn’t better. Thomas Lennon, a rightful legend in the alt-comedy community thanks to The State (1993-95) and Reno 911! (2003-09), is a smart casting choice as protagonist Edgar, a comic-book writer who finds himself at a convention marking the 30th-anniversary of the ‘Toloun Murders’ when Nazi puppets break loose. His near-emotionless deadpanning adds neat humour to the absurdity of things. He also brings a quiet sad-sack moroseness to the character which is appreciated.

But The Littlest Reich has a frustrating story in which characters stumble through without clear motivations. It’s on rails and eager to just get to a climactic bloodbath. And that’s fine, to a point, as most aren’t going to be watching for much else, but horror always works best when audiences care about the people under attack. Just a little. 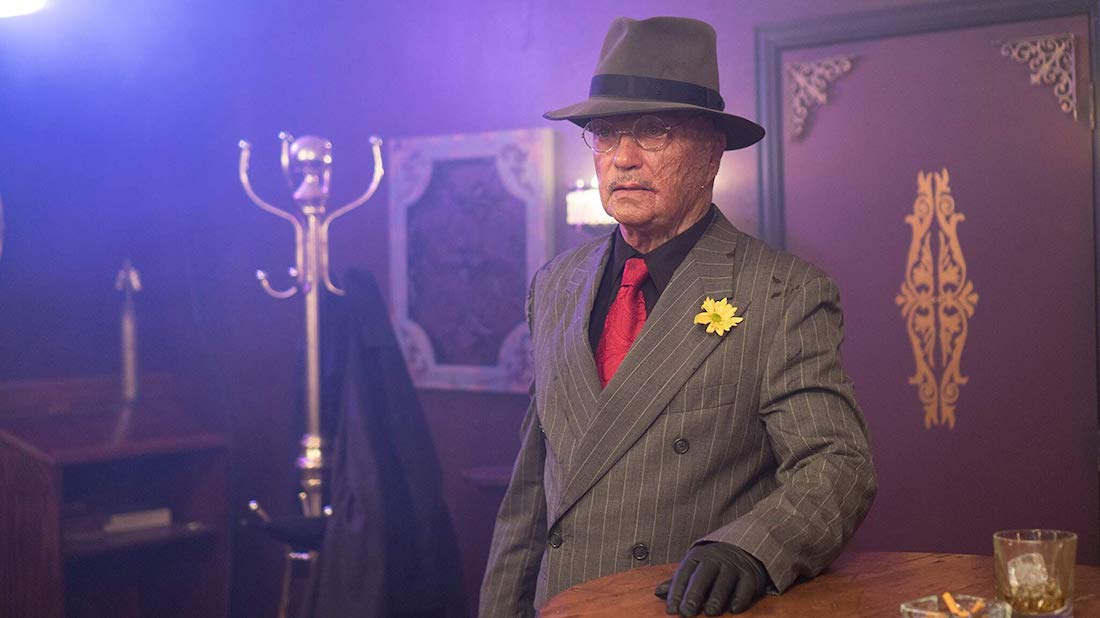 S. Craig Zahler, who wrote the screenplay, gives the actors very little to cling to. Edgar’s new girlfriend Ashley (Jenny Pellicer) seems to exist to either take her top off or dump clunky exposition, while his obnoxious friend/boss Markowitz (Nelson Franklin) is a baffling and borderline antisemitic caricature who’s only slightly improved by the fact that Franklin knows how to make unfunny lines sound half-decent.

Zahler, whose previous work as writer-director includes the memorable Bone Tomohawk (2015) and the fierce Brawl in Cell Block 99 (2017), has always been better at showing than telling. He put Vince Vaughn’s towering height and physicality to terrific use as the near-silent anti-hero of Cell Block 99, and he’s incredibly adept at creating inventive and gruesome death scenes. Those films didn’t need to say a lot, but they succeeded in their own aims, but everything that worked with Zahler directing falls flat in The Littlest Reich with Sonny Laguna and Tommy Wiklund co-directing.

There’s a bleak comedy in Zahler’s previous stories; a gallows humour that masked what’s starting to now feel like nihilism. In The Littlest Reich, the script’s comedy is more overt and eye-rolling, with toughness replaced by tiresome grindhouse crassness and an overwhelming sense of pointlessness that clouding everything. 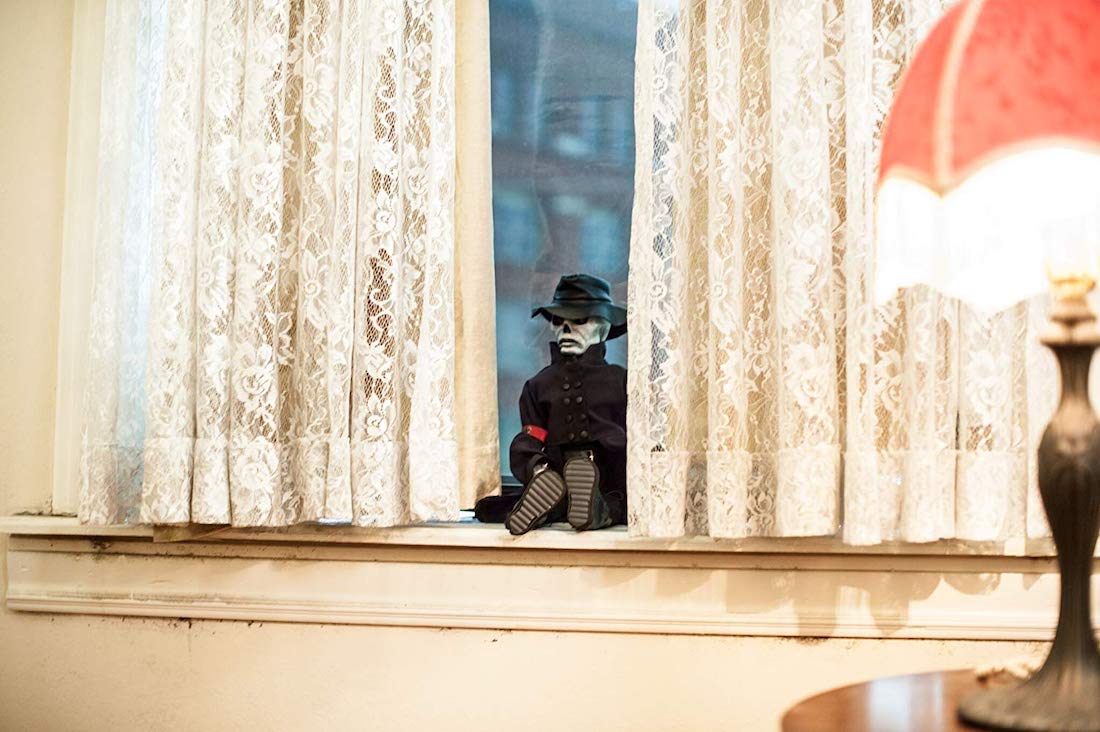 Worse, the film tries to have its blood-stained cake and eat it. While it revels in spilt gore and viscera, it dispassionately injects moments that are supposed to make us believe it somehow thinks fascism is no laughing matter. Amongst the increasingly-numbing killings (which, it’s pointed out very flippantly, are all hate crime killings), there are some very tonally strange moments. There’s a scene in which Markowitz gets to express the pain and rage he feels for what he’s done to the Jewish people, but it sounds wildly insincere and thus undercuts a potentially meaningful moment with desperate shock humour.

Another problem is that the victims in the film (Jews, ethnic minorities, LGBTQ+ people) have absolutely no agency in the story. The violence against them is played for laughs and no power is given to them whatsoever. In a time when it’s increasingly normal to see far-right extremists on the news, you’d think a film (even one as unabashedly silly as this) would at least try to grapple with the subjects it supposedly tackles.

By the fifth or sixth death scene, despite some enjoyable throwback practical gore, the frustration calcifies into deep boredom. It’s always difficult to make a puppet appear scary, but it should be easy to make a puppet funny. Despite being a comedy-horror, The Littlest Reich somehow bungles the innate comedy of seeing a puppet moving jerkily around a hotel room. Maybe Team America: World Police (2004) ruined things for marionettes, but seeing these Nazi puppets in action isn’t half as amusing as the film believes. 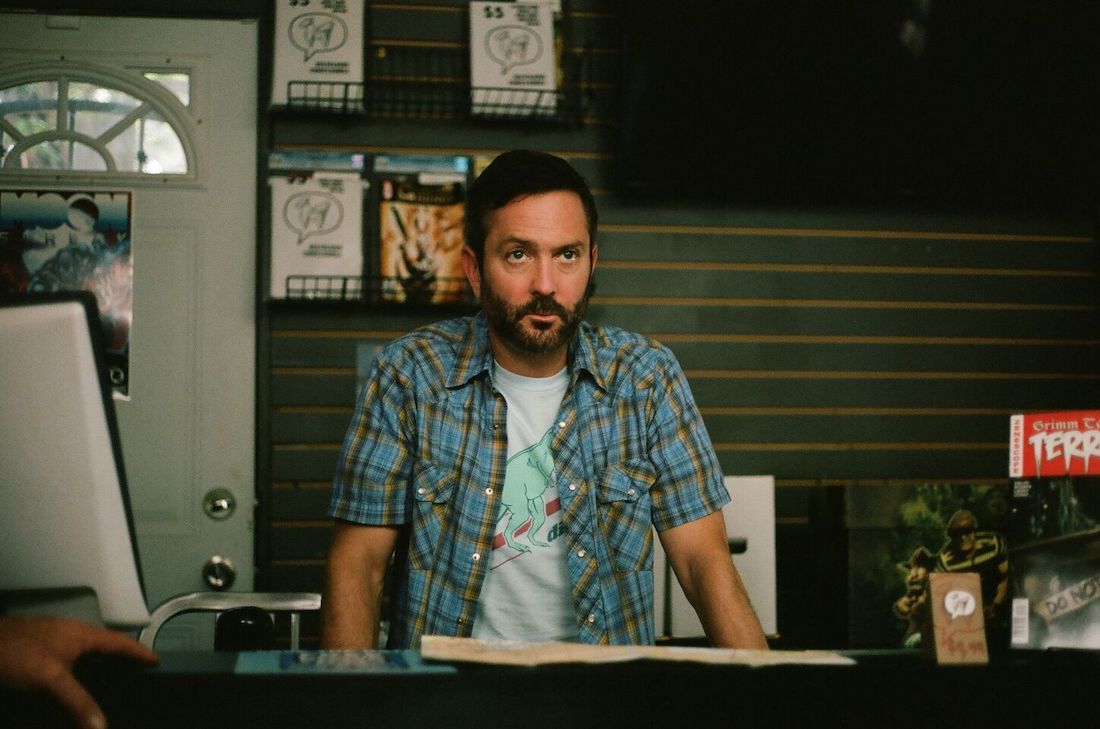 Sonny Laguna and Tommy Wiklund’s direction is also very flat, with poor editing undercutting some of the jokes, and odd framing makes the puppets look neither intimidating or funny. You always get the feeling someone off-camera is holding the puppets by the legs and walking them along. I started to wonder if Fangoria’s top brass were collectively drunk when they decided to produce this.

The film is mired in poor decisions, with an arbitrary third and a conclusion that’s not satisfying or even aware of how it got there. It’s as if Zahler stopped writing the script and walked away. There are only flashes of something better in The Littlest Reich. The striking black-and-red art during the opening credits, combined with a gorgeous eastern-European score of haunting strings by Fabio Frizzi and Richard Band, hints at something great to come. Barbara Crampton, Charlyne Yi, and Udo Kier are also stellar in supporting roles, despite being sorely underused, and the practical FX is a great antidote to weightless CGI. This being a Zahler script, there are also moments of gruesome ingenuity that almost demand some respect. 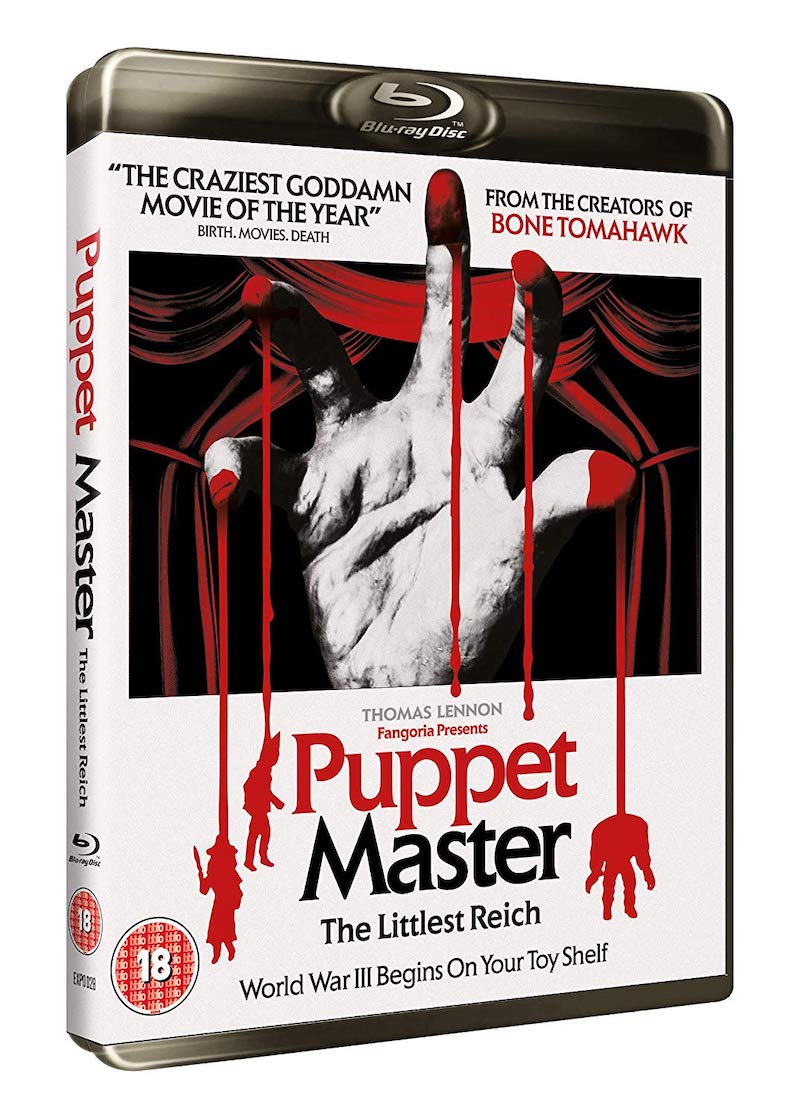 Puppet Master: The Littlest Reich looks great on this new Blu-ray release from RLJE Films, with a crisp and clear image that captures each squirt of blood. Both the score and the sound mix are presented very well, too. The gorgeous cover art and a solid bunch of extras make this a no-brainer purchase if you’re a Puppet Master fan.