This week on Game of Thrones, another old favourite made his belated return, the Stark siblings tried to build their army, Jaime arrived in the Riverlands to deal with the Blackfish, and Arya booked passage back home… 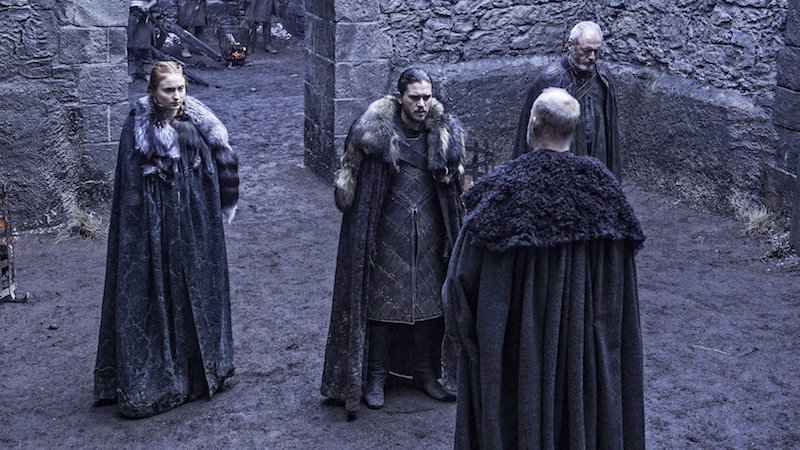 This week, it was all about trying to amass enough men to create an effective Stark-led army against the Boltons, with Jon (Kit Harington), Sansa (Sophie Turner) and Davos (Liam Cunningham) putting on their diplomatic hats to persuade their neighbours to protect Castle Black and take back Winterfell. A lot of time was dedicated to this, which is of questionable appeal, but I thought it was interesting to see how one goes about rallying soldiers and horses to a cause.

The Wildlings were a relatively easy bunch to persuade, seeing as Jon was responsible for saving their dwindling numbers at Hardhome, but it was tougher getting the House of Mormont and House Glover aboard. I really liked the scene where it was revealed House Mormont is currently led by a child, Lady Lyanna Mormont (Bella Ramsey), with the young actress doing a marvellous job commanding a room of more experienced adult actors. The joke that House Mormont could only muster 62 men was an amusing pay-off, too. As for House Glover, well that proved impossible, because Robett Glover (Tim McInnerny) isn’t happy the centuries of Stark-Glover unity ended so terribly with the defeat of Robb Stark. By the end of this storyline, it seems Sansa’s going to save the day by sending a raven to someone who might be able to reverse their fortunes — perhaps she’s decided to let Littlefinger and the Knights of the Vale come to their aide after all? 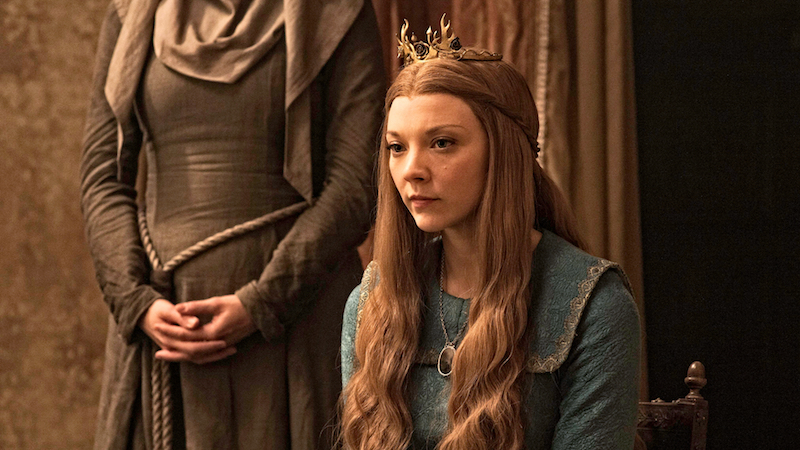 This storyline shows no real signs of life now, but I live in hope that Margaery’s (Natalie Dormer) just playing a very long con on the High Sparrow (Jonathan Pryce) and King Tommen. It certainly felt that way, after she sneaked a drawing of a rose to her grandmother Olenna (Diana Rigg), after instructing she leave King’s Landing, or else by next on the Faith Militant’s hit list. And, beautiful as Diana Rigg once was, few people want to see her doing the ‘walk of atonement’ at this late stage of life. I just wonder what Margaery’s longterm goal is. If she’s simply happy pretending to be faithful, to prevent being publicly humiliated by the High Sparrow’s punishment methods, that’s one thing, but does she gave a more elaborate plot bubbling away? I hope so. Otherwise, why not just accept her own rescue last week? 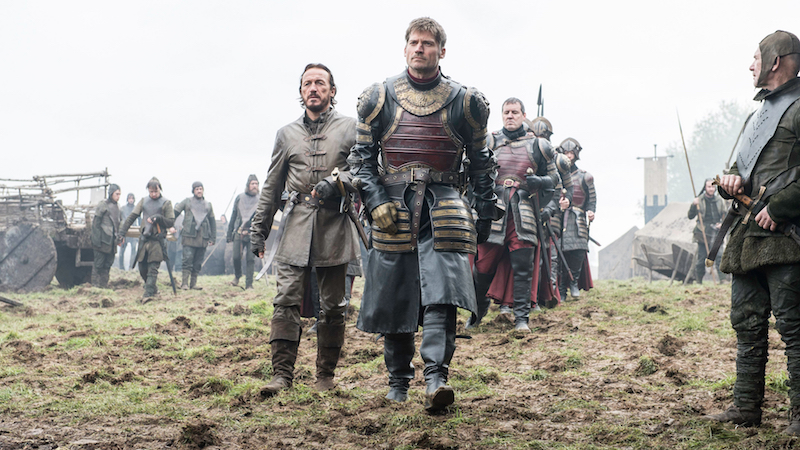 This corner of Westeros has suddenly become very important. It was nice to see plain-speaking Bron (Jerome Flynn) back on the show, now the almost literal ‘right hand’ of Jaime Lannister (Nicholaj Coster-Waldau), as they arrived at the castle under siege by the inept Lothar Frey and Walder Rivers. Two men who didn’t even know to keep a perimeter, and who find that their threat to hang or cut the throat of Edmure Tully (Tobias Menzies) just falls on deaf ears with ‘Blackfish’ (Clive Russell). Indeed, the Blackfish seems to have the upper-hand even after Jaime arrives—as the castle has two years of provisions, and he doesn’t envisage Jaime’s men being able to break through its defences in a hurry.

Also in the Riverlands area, there was an opening scene surprise when it was revealed that Sandor ‘The Hound’ Clegane (Rory McCann) survived his life-threatening wounds, after losing a hilltop battle with Brienne, and has apparently spent the ensuing months helping religious villagers build a church. A fan-favourite I always expected to return, it was great to see The Hound back on Game of Thrones for the first time since season 4, and hopefully a reckoning with Arya (Maisie Williams) is in his future.

For now, I liked how this week’s storyline played out, with The Hound finding a friend in a warrior-turned-septon called Ray (Ian McShane), and starting to consider that he can turn his life around and do something good with it. After all, being spared death must mean something. Unfortunately, the innocent villagers were brutally slaughtered by three men from the Brotherhood Without Banners, while The Hound was away collecting wood, and Ray was hung inside their half-built church. The last shot had The Hound grabbing his axe, but presumably not to resume his work. Vengeance is on his mind. But I do wonder if we’ll still see a change in The Hound anyway, as he embraces the ‘antihero’ status many had given him in the past.

Absent last week, there was a quick catchup with Yara (Gemma Whelan) and Theon Greyjoy (Alfie Allen), who are sailing the Iron Fleet to Meereen to forge an alliance with Daenerys. So yes, they’ve basically stolen evil uncle Euron’s plan from the Kingsmoot! To be fair, it was a good plan. Yara continues to intrigue me as a character, too. Family clearly means a lot to her, but she’s very insensitive about Theon’s injuries — insisting their visit to Volantis involves a trip to a brothel, which only reminds Theon of his newfound status as a eunuch. 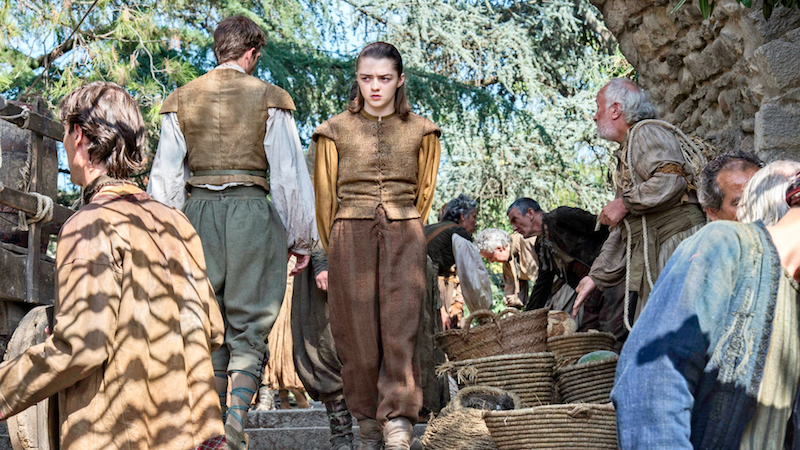 Now that Arya’s turned her back on the Many-Faced God, things are looking up already—well, for the storyline. After securing passage back to Westeros by ship, Arya was approached by an ‘old woman’ who turned out to be the Waif (Faye Marsay), who stabbed her in the stomach before sending her tumbling over a bridge and into a river. But while we end this storyline with Arya stumbling around Braavos with a terrible injury (echoing how she left the now-recovered Hound, in some ways), I don’t have any fears about her safety. Someone will come to her rescue. This subplot felt like it existed so the Waif can believe Arya is dead, and no more ‘faceless assassins’ will stick to Arya like glue over in Westeros. I still shake my head in disbelief that we’re perilously close to Arya simply returning to Westeros, having learned a few fighting skills, and that was the sum total of her once-exciting trip to Braavos?

“The Broken Man” was a good episode, but also another piece-moving one like last week — this time largely focused on the young Stark’s diplomatic skills. There wasn’t anything here that surprised me, although it was fun to see The Hound back and his story was entertaining — despite being rather cliched in how it played out. A shame to waste the great Ian McShane with a one-off guest appearance, too, right? I missed getting forward movement from the storylines I’m more deeply invested in by now, but it was still enjoyable to see Jaime out in the wilds of Westeros again (what will happen when old friend Brienne turns up there?¹), and there were long overdue signs of life with Arya’s interminable, wheel-spinning story.

(¹ How did Jaime get from King’s Landing to the Riverlands quicker than Brienne from Castle Black, who left much earlier?)