The past is never very forgiving in Outlander. “Je Suis Prest”, translated as ‘I am ready’ from the Clan Fraser’s motto, is an ironic title for this week’s episode. If anything, given the unfit state of Jamie’s (Sam Heughan) ragtag army, Claire’s (Caitriona Balfe) painful memories of World War II and the clash between Jamie and Dougal MacKenzie (Graham McTavish) about leadership styles and discipline, no one is actually ready for the carnage to come.

The war is brewing and the remnants of Jamie’s men, gathered from Lord Lovat and the Fraser clan, set up camp and prepare to train before they finally join Charles Stuart. The rendezvous with Murtagh (Duncan Lacroix) allows us to enjoy some light-hearted ribbing when Claire and Jamie are reunited with some faces we’ve not seen in a while: Colum’s men Angus Mhor (Stephen Walters) and Rupert MacKenzie (Grant O’Rourke) and, of course, little Fergus (Romann Berrux). Jamie faces an uphill struggle to shape and strengthen a very sorry looking band of men and he sets out, with Murtagh, Angus and Rupert’s help, to train them his way. 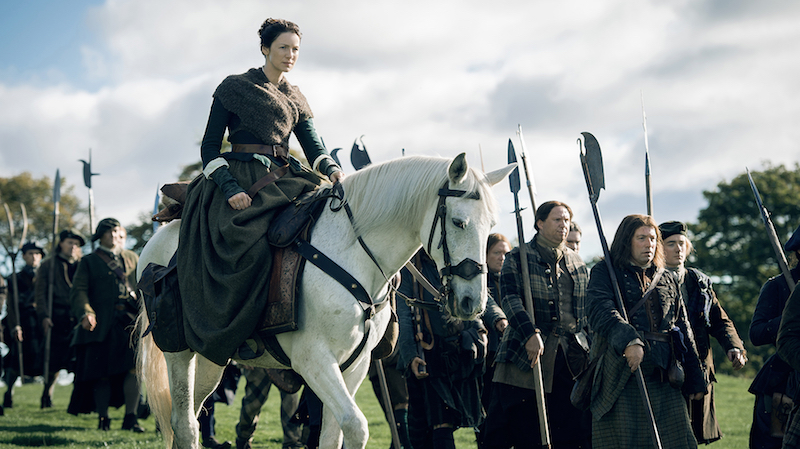 When Dougal MacKenzie makes his long overdue return to the series it instantly spells trouble. Not only does Dougal presume that he has the leadership and discipline to turn the untrained men into determined fighting machines but he also undermines Jamie’s attempts to do likewise. Male egos clash and testosterone levels go through the roof as both men argue about the most effective means of building their forces.

These training sequences are handled through some fine montages by director Philip John. The locations are beautifully married with Bear Macreary’s music evocatively using the Gaelic folk anthems “An Fhìdeag Airgid” and “Moch ‘sa mhadainn” to emotionally connect us to the doomed Jacobite cause. These eventually culminate with Jamie’s striking monologue that undercuts his men’s views of the forthcoming battle and judging their own training as “foolishness and games”. He assures them that many will not return to their loved ones when they confront the redcoats, their muskets unleashing “a sheet of metal rain cutting down men left and right.” By the conclusion of the episode the trivial perceptions of war have been reversed through some tough training and even tougher psychological conditioning. Jamie passes on some valuable advice about their adversaries: “I realised it takes more than courage to beat an army like that. It takes discipline.”

Where Jamie tries to instil discipline, even going so far as to whip his own men for their dereliction of duty and then later offer himself up for a whipping as punishment for his own failures, Dougal opts for the striking tactic of sending semi-naked men in kilts in a ‘Highland charge’ to put the frighteners on the red coats. After Jamie rejects this strategy, Dougal is ordered into line and to respect Jamie’s orders. 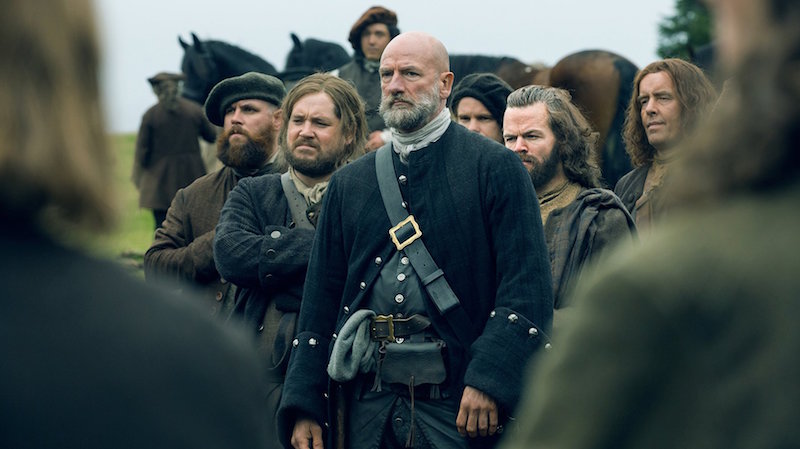 However, Dougal also exploits the situation by dredging up the pact he made with Claire back in last year’s episode “The Search”. There he proposed marriage to Claire as he believed Jamie was as good as dead in Wentworth Prison and considered her plan to rescue him an act of folly. Naturally, being the manipulator he is, he uses this to try and force Claire to convince Jamie that Dougal is the leader with the necessary expertise. Claire is having none of it and berates him for his “affliction”, a conceited sense of self-importance, using a fine line in Freudian analysis and the f-word to topple his grandiose view of himself. Her dressing down does reveal, however, that beneath the false pride he possesses a fierce loyalty to Scotland and the Jacobite cause.

The episode traces these tensions, symbolised by both commanders eventually acknowledging they have been sloppy by allowing strangers and spies to infiltrate the camp, and Dougal’s reluctant acquiescence to Jamie’s orders as Clare also undergoes a psychological test. As the flintlocks fire and troops suffer the twin indignities of trench foot and terrible catering, Claire’s own experiences of World War II come bubbling back to the surface of her consciousness. Outlander again takes its time to explore those experiences. We have so far heard little about how the war affected her and it adds another dimension to Claire’s character. The episode deals with the very real effects of post-traumatic stress disorder on combatants and the service men and women who supported them.

As the untrained Scottish farmers learn about discipline and combat and find time to rest and play, she casts her mind to World War II. These recollections show Claire befriending two American soldiers separated from their unit, Corporal Grant (Billy Griffin Jnr.) and Private Lucas (Tyler Collins). Like their Scottish counterparts they’re not really prepared for war. Worse still is the sheer horror of her helplessness when she is forced to lie in a ditch overnight after a German attack leaves Claire and Grant separated from a badly wounded Lucas. When Grant attempts to rescue Lucas, he’s shot down and leaves Claire trapped in the ditch, afraid and subjected to the constant cries of the wounded Lucas. Caitriona Balfe rises superbly to this challenge and we get a very raw experience told in flashback that effectively transmits to us Claire’s foreboding about the inevitable tragedy of Culloden and her bitter experience of war. 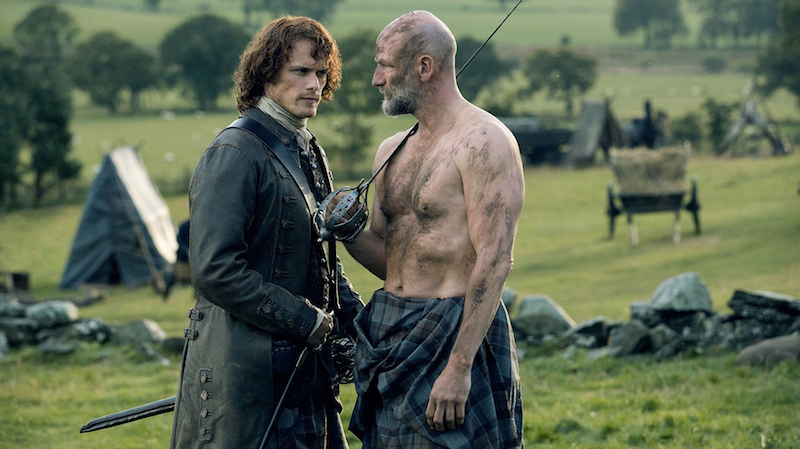 This is so traumatising that Jamie believes she should return to Lallybroch for her own sanity. Claire is stronger than that. She elects to face her demons and rejects his suggestion because it will simply reduce her to “lying in that ditch again, helpless and powerless to move – like a dragonfly in amber.” However, we can but wonder about Jamie’s unfulfilled promise, that “no matter what happens, you’ll never be alone again”, given her return at the start of the series through the stones to the twentieth century.

Drawing together the montages of Jamie and Murtagh drilling the soldiers we get a sense of Jamie’s growing leadership. It culminates in his courageous, rather foolhardy night time commando raid on the English camp after he uses Claire in a fun moment of subterfuge. After a young 16-year old English soldier Lord John William Grey (Oscar Kennedy) attempts to attack Jamie, Claire feigns to be an English captive willing to give up her honour to spare Grey’s life. Jamie plays along and Grey dishes the dirt and reveals information about the nearby English camp. It is a debt of honour that Grey insists will be paid in full by killing Jamie. For Diana Gabaldon’s readers this is of course the introduction of a major character so you will be seeing more of young John William Grey in the future.

The episode concludes with Jamie’s arrival at the Jacobite encampment where Charles Stuart and his army await. Jamie’s men are as ready as they’ll ever be and when he reminds Claire there is “No turning back now, Sassenach,” she responds with the Clan Fraser motto, sure that she too is ready to face the war to come.