Science fiction is my favourite genre, and time travel stories fire my imagination the most. This is partly because theoretical science supports the idea that travelling through time is really possible, so fiction hangs in that sweet spot between imagination and predestination. It’s also just incredibly fun to ponder what you’d do as a time-traveller, which is something countless authors have indulged for over a century—with the modern trend started by the 1985 publication of The Time Machine by H.G Wells. Stephen King is a writer more closely affiliated with the horror genre, but his sci-fi thriller 11/22/63 became a big hit in 2011, and has now resulted in a miniseries developed by Bridget Carpenter (Friday Night Lights) for the U.S streaming giant Hulu.

Both concern a popular pub discussion when talk turns to the concept of time travel: would you go back and prevent the assassination of President John F. Kennedy? That sunny day in Dallas, Texas has always played on the conscience of modern America, with people often saying that JFK’s death marked the end of the USA’s innocence. It’s an event that has also birthed a multitude of conspiracy theories, which is often the only way people frame discussion of that historical landmark.

Warning: the following review contains mild spoilers for events that occur throughout the miniseries, but avoids discussing specifics of the finale. 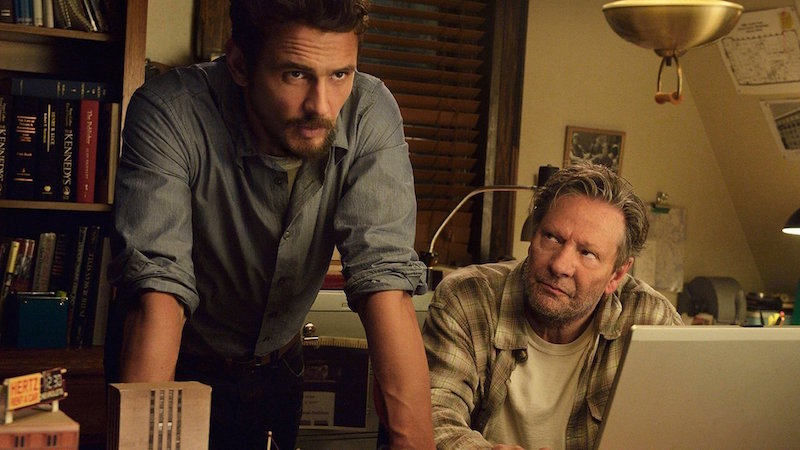 In 11.22.63, idle chitchat becomes very real for boyish English teacher Jake Epping (James Franco), who’s brought into the confidence of an ageing diner owner called Al Templeton (Chris Cooper), after he mysteriously gets cancer. It turns out that Al has a time portal situated inside a closet, tethered to 1960. You can spend as much time as you want back then—a few days, a couple of weeks, perhaps even a year or two—but when you return to the present day only two-minutes will have passed. And if you attempt return, any historical changes you make will be reset because you’ll find yourself back in 1960 again. Naturally, after being persuaded to walk through the closet and see for himself, the incredulous Jake realizes his terminally friend’s incredible story is very true. Unfortunately, Al hasn’t simply bequeathed this time machine to Jake before his succumbs to his cancer, he’s asking for him to continue his mission: travel back to 1960 and spend three years investigating who’s going to assassinate JFK, and stop them so that an improved timeline will be ushered in. It’s an insane plan Jake nevertheless honours, after discovering Al’s passed away one night and never got to see his alternative reality made real.

Given the fact Jake has three years to prepare for the President’s motorcade driving through Dallas on 11 November 1963, it’s not surprising this show takes some enjoyable diversions. For a concept that already has loose echoes of Quantum Leap (which even had a two-part episode where time-traveller Sam Beckett had to save JFK’s life), Jake similarly finds ways to alter the destinies of people he knows from the present. In particular, the second episode sees him amend his plan for a stopover in a small Kentucky town, days before he knows local butcher Frank Dunning (Josh Duhamel) will massacre his family on Halloween night—including a young boy who’ll grow up to become one of Jake’s mature English students; a man still haunted by this gruesome, life-changing experience. 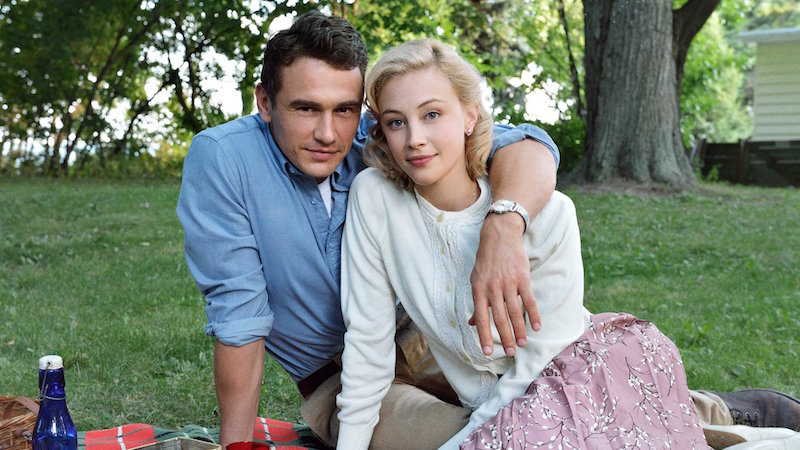 It was a wise decision to give Jake other things to do (especially if you’re not fully into the conspiracy theories about who shot JFK), and “The Kill Floor” was certainly a very enjoyable side-story that beautifully evoked Stephen King’s style of storytelling. Duhamel was a particular delight as the monstrous Frank; a ne’er-do-well father and husband, who took delight in pressuring bookworm Jake to kill a cow in an abattoir using a lump hammer.

However, the majority of 11.22.63′s eight hours focus less on the high-concept drama of altering history and more on the simple problems that arise when you’re living a lie. Having been forced to take a young redneck called Bill Turcotte (George MacKay) into his confidence, Jake and his new partner move to the Dallas-area town of Jodie in “Other Voices, Other Rooms”. There, Jake lands himself a job teaching at the local school and soon falls in love with pretty co-worker Sadie (Sarah Gadon), all while secretly keeping tabs on his next-door neighbour: Lee Harvey Oswald (Daniel Webber)—the now infamous former US sniper, fresh back from Russia with his wife Marina (Lucy Fry), who may or may not be part of an elaborate CIA plan to eliminate the troublesome new President. 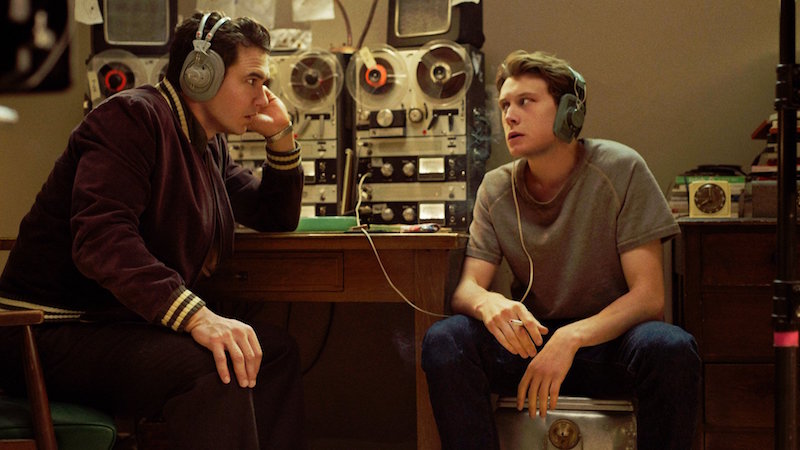 As Jake and Bill carefully surveil Oswald as the titular date edges closer, once again the show’s wider concern tends to take a backseat to the down-to-earth storytelling—although it’s perhaps a little disappointing this amounts to Jake again finding himself in the sights of another male psychopath: Johnny Clayton (T.R Knight). Worse, Johnny’s a walking trope—the creepy, estranged husband with a sexual hang-up, who won’t give his beautiful wife a divorce so she can live happily with a new beau. And yet it’s hard to hate episode 5, “The Truth” (also directed by Franco), because Knight’s performance is so wonderfully unhinged, and there’s a very tense sequence involving Johnny, Sadie, Jake and a glass of bleach. It’s also a key turning point in the surprisingly touching relationship between Jake and Sadie, which benefits from the chemistry Gadon and Franco have together.

To a large extent, a miniseries like 11.22.63 lives or dies on the strength of its ending, and I had very mixed feelings about how the story drew to a close. It was inevitable that the last episode would concern Jake trying to thwart the JFK’s assassination, but it felt strange that everything boiled down to exactly the sort of situation you’d imagine happening from the start: Jake struggling with Oswald in the Texas Bookstore Depository, just as the President’s motorcade passes through. It may have been a disappointment if they’d avoided that simplicity, but the show teases us with the idea Jake’s in a rare position to uncover the truth of what happened that day—and, rather than put forward a compelling, fictional alternative theory, 11.22.63 just seems to concede defeat and goes with the easiest option. It doesn’t even have the balls to demystify anything we know about Oswald in terms of motive, as Jake largely fails to understand why the gunman felt so compelled to become an assassin. I understand this is a historical event, so perhaps King felt like he couldn’t claim anything from his imagination is “fact” within his own universe, but it’s a shame. 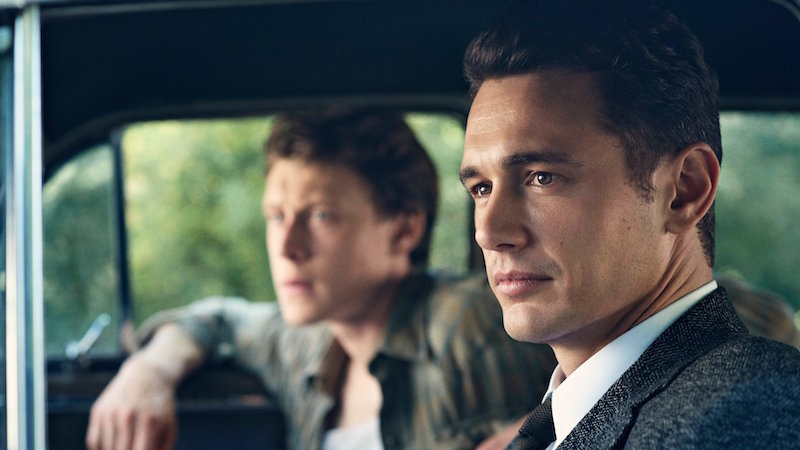 Without spoiling too much of how 11.22.63 ends, “The Day in Question” has moments of emotional heft, but largely struggles under the weight of expectation. The JFK situation is dealt with very quickly, leaving the majority of the hour free to handle the aftermath, and whether or not Jake’s actions have altered the future. I won’t go into that too much, but it was here that Franco’s uneven performance didn’t do the show any favours. There were too many moments when Jake’s reaction and behaviour to what’s happening didn’t ring true to me, and you almost got the impression the actor was having difficulty really engaging with anything on an emotional level. I’ve heard it said that Franco was outright terrible in 11.22.63, but wouldn’t go that far. He communicates Jake’s decency very well, and I felt invested in his relationship with “brother” Bill and girlfriend Sadie, but it’s true that I never felt like he was genuinely determined to save JFK’s life, at all costs.

11.22.63 certainly ranks as one of the better Stephen King adaptations, definitely as television productions go, but it fell short of the potential the premiere displayed. The middle episodes were certainly entertaining, but also meandering and clichéd, and I ended up questioning Jake’s elaborate three-year surveillance of Oswald. There were a dozen better ways to ensure JFK couldn’t be the target of an assassin that day, and the show’s inventive idea that a mysterious force fights any changes being made to history (rather like the ‘death’ force in the Final Destination films) seemed to wax and wane in determination according to the demands of the plot. The final episode should have seen Jake having to avoid a lot more problems than a city traffic jam and a jobsworth doorman, let’s be honest.