Season 2 of The Man in the High Castle immediately picks up where the first season finale “The Way Out” ended. It’s pretty much business as usual in this year’s opener “The Tiger’s Cave”, with Joe Blake (Luke Kleintank), Juliana Crain (Alexa Davalos), and Frank Frink (Rupert Evans) still struggling to survive in an alternate reality post-WWII America jointly occupied by the Greater German Reich and Imperial Japan.

Given the scenario, the timing of The Man in the High Castle’s second season has been interpreted by some pundits as a dark reflection of the so-called “post-truth” era that swept president-elect Donald Trump to power. As I’ve previously noted, it’s a series that underscores the normalisation of evil and, given the current season was made before we reached 2016’s unsettling political conclusion, I’m as yet circumspect to fully equate the blurred lines of the show’s alternate reality with our own. 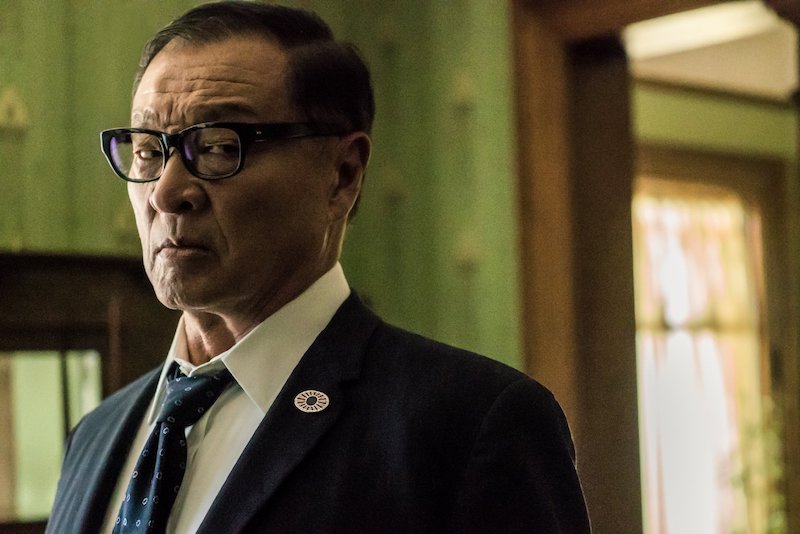 The Nazi uniforms and swastikas, the Reich’s Speer influenced architecture, and the twisted schoolboy pledges of allegiance to Hitler are all too obvious as symbols to layer onto Trump’s victory and whatever it may represent in the form of far right values. Political theorist Hannah Arendt’s view of fascism perhaps chimes more easily with The Man in the High Castle’s blatant brush strokes, where she theorises the nature of totalitarian rule is only accepted by “people for whom the distinction between fact and fiction and the distinction between true and false no longer exist.”

Those perceptions riddle the original Philip K. Dick novel, suggesting a series of realities where making that distinction is questionable and difficult, where the fake challenges the authentic. It’s essentially a text about the controlled use of propaganda and the forgery of reality. Dick certainly reflected on the McCarthyism of his own era and felt trapped in a false reality from which he couldn’t escape. It’s the sense that we are all in a false reality that the series captures well rather than a reimagining of Trump’s faux politics.

For new viewers joining the show at this point, you probably won’t have a clue what’s going on and you’d be advised to watch season 1 first. Because its world view is so meticulously constructed The Man in the High Castle isn’t a show you can dip into at random. To recap from last year’s finale, Juliana, dragged into the search for notorious newsreels depicting an alternate reality where America won the war, has saved Nazi agent Joe from the Resistance. He’s next seen bribing the crew of the boat, used to affect his return to the bosom of his Nazi superiors in New York, with one of the films that the Resistance, the Japanese and the Nazis have been chasing for the last ten episodes. 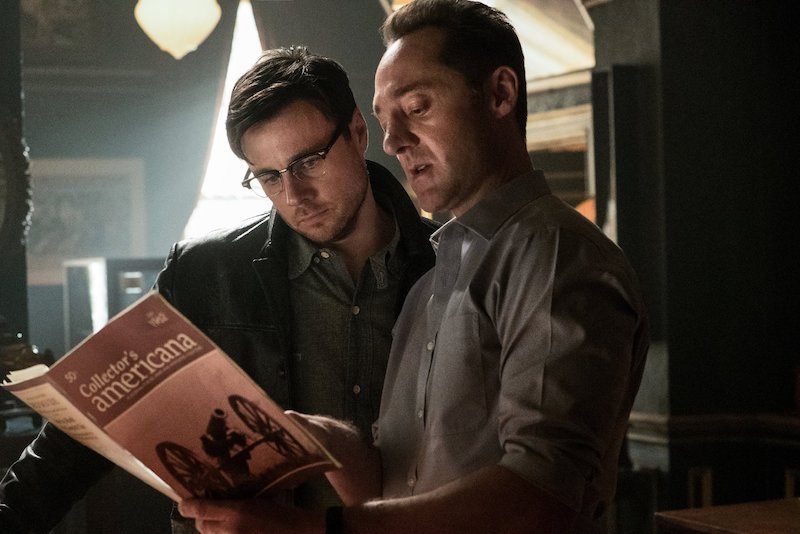 Joe is eventually picked up by seaplane when he arranges for the Nazis to pay the crew but has a pang of conscience after they blow up the boat, the money, and the men to secure the film. He voices this in his meeting with SS-Obergruppenführer John Smith (the brilliant Rufus Sewell) and demands to quit his post, claiming “this isn‘t the man I wanted to be.” It’s little late for him to discover the Reich’s methods will always leave a nasty taste in his mouth, and we’re left wondering where Joe goes from here. Could he, gasp, swap his allegiances after all and, gasp, do we really care?

The recovered film shows an alternate reality where San Francisco has been destroyed by an atom bomb and, among the survivors, Joe is seen shooting Juliana’s partner Frank Frink. Juliana, dumped in a cell by her Resistance friends for her betrayal to the cause, is apparently shot by Resistance leader Gary Connell (Callum Keith Rennie) but wakes up in the company of Hawthorne Abendsen (Stephen Root). He is a major, and perhaps last, connection to Dick’s original book, of which incidentally there is now very little left to adapt. I suspect the showrunners will be taking the premise into completely new territory this year. Perhaps this might explain the sudden departure of showrunner Frank Spotnitz who reportedly had some disagreements about exactly where the show was heading.

In Dick’s book, Abendsen is the author of the alternate reality novel ‘The Grasshopper Lies Heavy’ but in this episode he is the owner, perhaps curator, of “the conscious and unconscious mind–Carl Jung, got it?” warehouse stacked with newsreels depicting other realities full of “fear and violence”, where Germany didn’t win the war and where Japan was the victor. However, San Francisco is flattened in every film but one. He’s keen for Juliana to identify a mysterious blond-haired man who could prevent the destruction of San Francisco seen in the one film he shows her. Unfortunately, she is neither able to recognize him nor the subplot to track down that elusive figure that the writers have introduced to drive this year’s season. 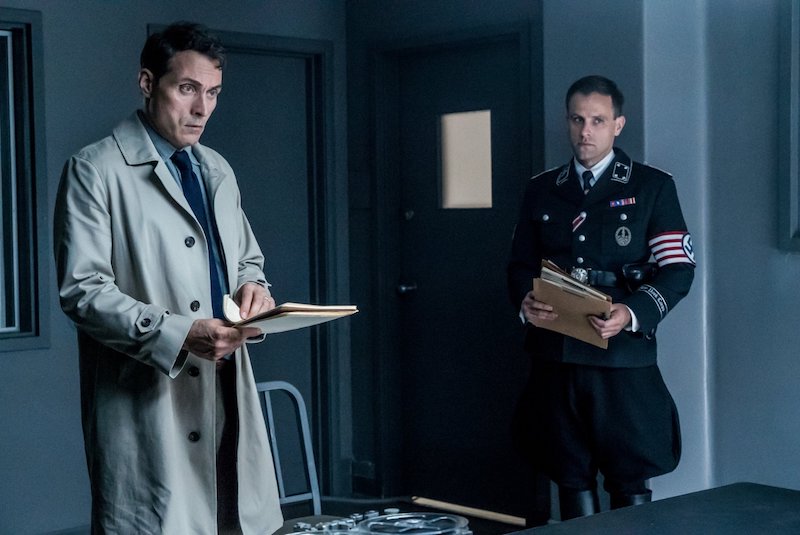 It’s a sudden, quite unexpected, meeting with the titular occupant of the ‘High Castle’. It also demonstrates Hitler may well be the Nazi counterpoint to Abendsen, complete with his own collector’s fetish for reality-altering film reels. Juliana’s encounter fuels the confusion about why these films are important and, crucially, from where they are obtained. While Abendsen plants some obfuscating hints about the future, Juliana’s thrown off her course by Gary Connell’s attempts to bump her off again and by the very odd flashback/dream montages she seems to be haunted by. They too will likely have some significance down the line and we might actually get to understand the significance of the man at the funeral she sees in her flashback montage. The problem is she’s still such a dull character and there’s still little viewer empathy for her.

Wobbly old Hitler (Wolf Muser) is clearly not happy about these films, so orders John Smith to seek out the ‘Man in the High Castle’ after he watches San Francisco vanish beneath a mushroom cloud.  Meanwhile, the Japanese high command has secured the atomic secrets that were at the centre of last season’s storyline involving the feted industrialist Wegener and trade minister Nobusuke Tagomi (Cary-Hiroyuki Tagawa). They’re already preparing their own Heisenberg device based on this intelligence. I’m wondering if the device is in itself the catalyst to accessing multiple realities given that Heisenberg’s uncertainty principle is tied up within quantum mechanics and the many-worlds theory that implies that all possible alternate histories and futures are real.

Trade minister Tagomi, perhaps the most empathetic character in the series, has already felt the effects of the device with his brief timeslip into an alternate 1962 where JFK is president and there isn’t a swastika in sight. He’s clearly troubled by the alarming outcome of his meditation when he returns to his office and attempts to divulge his experiences to his assistant Kotomichi (Arnold Chun). It’s a tantalizing moment that indicates this is another long-running subplot that will gradually unfurl during the season. 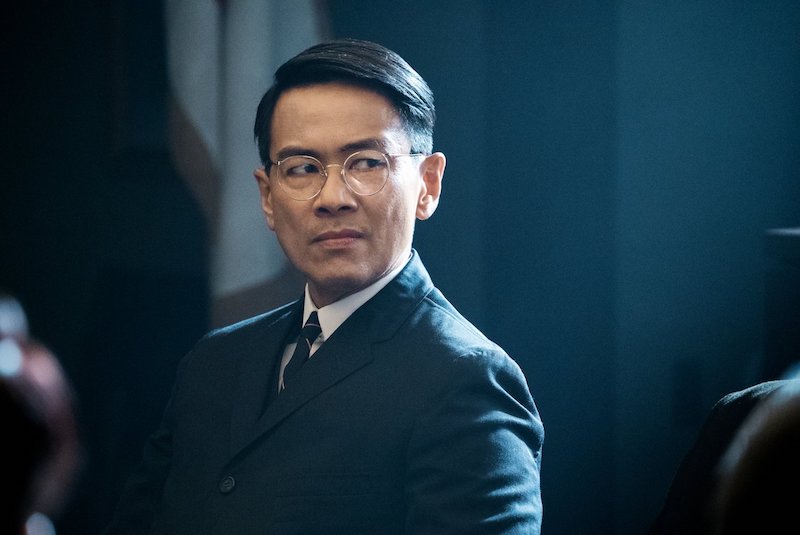 Finally, what of Frank Frink? Juliana’s impulsive other half is desperate to help his friend Ed escape the clutches of the Japanese Kempeitai who have arrested him for the failed assassination of the Crown Prince during his visit to the Japanese Pacific States. The only way he can think of achieving this is to establish a direct link to the upper echelons of Japanese society. Cue the return of the superb Brennan Brown as arch antique shop owner Childan, who supplied the bullets for Frank’s replica gun that Ed had the foolish courage to use. A little bit of blackmail brings Frank and Childan to Japanese lawyer Mr. Kasoura in the hope that he will help them free Ed. Frank, desperate to secure his assistance, throws Childan a curve ball and fesses up to forging the Native American relics that Childan sold to the laywer. They’re a good combination of characters and it’ll be interesting to see how that line of attack works out.

So, we have a number of subplots engaged in “The Tiger’s Cave”: the mysterious man at the funeral, the mysterious man in the San Francisco film, John Smith’s search for Abendsen, Frank’s teaming up with Childan, and Tagomi’s slip into an alternate 1962–to just about keep us interested. The Resistance also will be determined to catch up with Juliana after her narrow escape from new leader Gary Connell caused the death of fellow operative Karen. Will she meet up with Joe again? Hopefully not as both of them sharing scenes have the tendency to halt episodes in their tracks. While the ‘heroes’ remain almost as dull as they were last season, it’s still troubling that the representatives of the occupying totalitarian powers, framed spectacularly by the superb production design, are more attractive and seductive, truly evocative of that ‘banality of evil’ that Hannah Arendt once described.