Michael Bay makes gloriously beautiful pieces of garbage. He’s desperately in need of a good script to bolster his worst impulses but rarely gets them. At least Bay’s moved on from the terrible Transformers cacophonies, but it wasn’t a coincidence the best one—Bumblebee (2018) —didn’t have anything to do with him.

6 Underground began life as a screenplay for Skydance Media by Paul Wernick and Rhett Reese, who brought fun and irreverence to genres involving superheroes (Deadpool) and zombies (Zombieland: Double Tap). Setting them loose on a big ensemble action-thriller with their Deadpool figurehead Ryan Reynolds held some promise. I don’t know how much of their original script was changed along the way (especially once Bay came aboard with his producing partner Ian Bryce), but 6 Underground is a tedious and unfunny waste of talented actors and a few good set-piece ideas.

The main hallmark of a Bay movie is the hyperactive editing (handled by three people in this film’s case) which tries to obscure the fact not much is happening or the fundamental stupidity of the story. “One” (Ryan Reynolds) is a billionaire playboy and who witnessed a brutal regime’s handiwork in the Middle Eastern nation of Turgistan, so faked his own death to lead a vigilante squad of “Ghosts” to deliver globetrotting vigilante justice. Eventually, he recruits five other people for his own personal black ops team: French female spy “Two” (Mélanie Laurent), Mexican hitman “Three” (Manuel Garcia-Rulfo), English parkour runner and thief “Four” (Ben Hardy), a doctor called “Five” (Good Omens’ Adria Arjona), getaway driver “Six” (Dave Franco), and an ex-Delta Force sniper called “Seven” (Corey Hawkins). The numbering perhaps reveals that not everyone makes it along the way! Together, they hatch a plan to trigger a coup d’état to bring down Rovach Alimov (Lior Raz), Turgistan’s evil dictator, so his nicer brother Murat (Peyman Maadi) can replace him once freed from prison. On the Day of the Day, for thematic reasons.

The concept isn’t too shabby, being a sort of Mission: Impossible-meets-Ocean’s Eleven with a bunch of international vigilantes. The problem is that Bay sweeps aside things that could have been interesting to explore - like how these people cope with being “dead” to their loved-ones and stuck in a vigilante lifestyle, or how being a Ghost works when you’re flying around the world and being caught on CCTV every day. The underpinning idea of 6 Underground is never explored with any emotional depth, so it just settles into being a boring version of Mission: Impossible that relies on three things: Bay’s skill composing action shots (even if they often get chopped to bits in the edit), the glossy cinematography of his longtime collaborator Bojan Bazelli, and the charisma and star-power of Ryan Reynolds in the lead.

The bad news is that Reynolds isn’t able to make any of 6 Underground fun on a character level, as his jokes are leaden or obvious, and whatever magic occurred between him and the Deadpool writers in those other movies evaporates here. Bay made two popular movies that combined action and comedy successfully enough, Bad Boys (1995) and Bad Boys II (2003), but whatever Will Smith did to stay relevant amidst Bay’s roving camerawork is beyond Reynolds’ ability. Perhaps it’s because 6 Underground has to service six actors, not just two, and Bay can barely summon the strength to give Reynolds enough of a reason to be here.

An opening car chase through Florence, Italy, with a lime green sports car and lots of explosions and market stalls being obliterated, should be more fun than it ultimately is. As we don’t yet know the characters or care about a situation we also don’t understand properly, it quickly becomes an onslaught of impressive stunts that pass by at high-speed and don’t land home. It’s depressing that so much work and effort went into shooting this on location when the result is something you start to lose interest in after eight minutes, but it seems to just keep going and going.

Of course, the only memorable element of 6 Underground is its action set-pieces, or at least two of them: a sequence where a skyscraper’s swimming pool bursts, causing a flood that washes people over the edge to their deaths, and a moment on a luxury yacht where an electromagnet causes chaos with metal objects flying through the air and stabbing people indiscriminately.

6 Underground is another attempt at movie legitimacy for Netflix, which desperately wants to cultivate its own film catalogue their subscribers feel are like major studio blockbusters. Their plan worked better for Martin Scorsese’s The Irishman (2019) recently, which actually got a brief theatrical run and wasn’t being referred to as a “Netflix movie” by audiences, just the latest must-see from a legendary filmmaker. It feels like a wonderful treat to have The Irishman on Netflix already, whereas 6 Underground and others like it feel like offcuts; films of unreasonably high budget ($150M, gulp!) that lack enough quality to risk a theatrical run amidst bad reviews. On Netflix, it’s something millions will idly stream in the week it debuts and the company can claim it’s a huge success.

Netflix could focus on making films that wouldn’t be commercial but are worth doing for a small but appreciative audience… but 6 Underground is like a wannabe-blockbuster nobody had faith in. It’s also a project that demonstrates why Hollywood studios still have the upper-hand when it comes to filmmaking, as they’re better positioned to guide a project through its development phase and offer invaluable notes to writers and directors before $150M is wasted on creating a piece of junk. Netflix only cares about how much non-subscribers will be tempted into signing up for the chance to see the latest Michael Bay movie “for free”.

6 Underground will undoubtedly attract an audience because of who’s involved and limited other options, but much like Spectral (2016) and Bright (2017) it reeks of something that would struggle in the “real world”. And whatever your opinion of Michael Bay’s braindead oeuvre, he does have a cinematic eye and taste for larger-than-life spectacle, so seeing him release a film many people will watch on a tablet or phone is sad to see. But at least it didn’t cost you a small fortune to discover 6 Underground is terrible, unlike his Transformers movies. Small mercies. 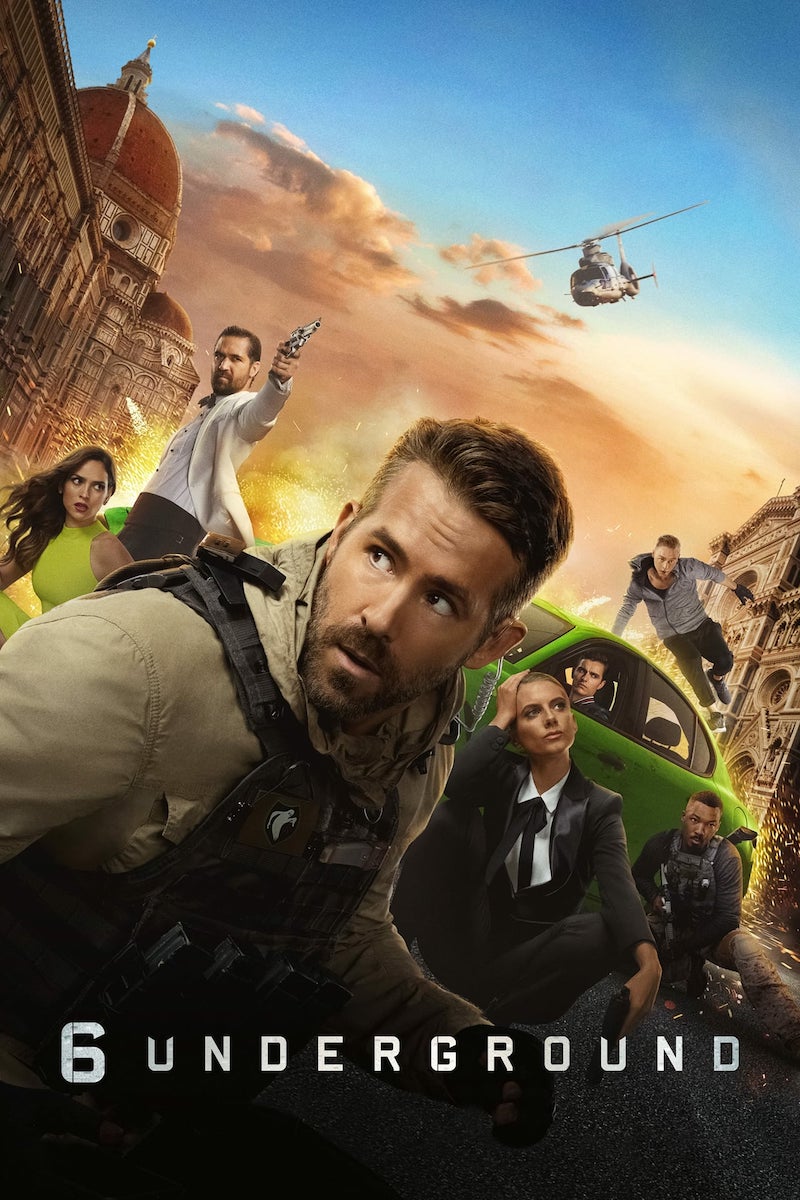