A mob hitman recalls his possible involvement with the slaying of Jimmy Hoffa.

For those who persistently criticize Netflix for doing irreparable damage to the film-going experience, we need a moment of honest reflection. Is there any chance in this age of graphic action over character-based drama, low-brow humour over sophisticated dialogue, and reboots and retreads over original storytelling… is there any chance Martin Scorsese’s The Irishman could’ve been made for anyone other than Netflix?

Sure, the film strikes on the acclaimed filmmaker’s signature beats of American anti-heroes engulfed in layers of corruption and violence. And yes, the film has a stellar cast including Robert De Niro, Al Pacino, and Joe Pesci. But it also had a production budget of $150M (a large portion of which went into de-ageing VFX for the three leads), and a runtime of nearly three and a half hours. Like much of Scorsese’s filmography, The Irishman is geared towards more mature audiences and was always unlikely to be a draw to most people under 45. 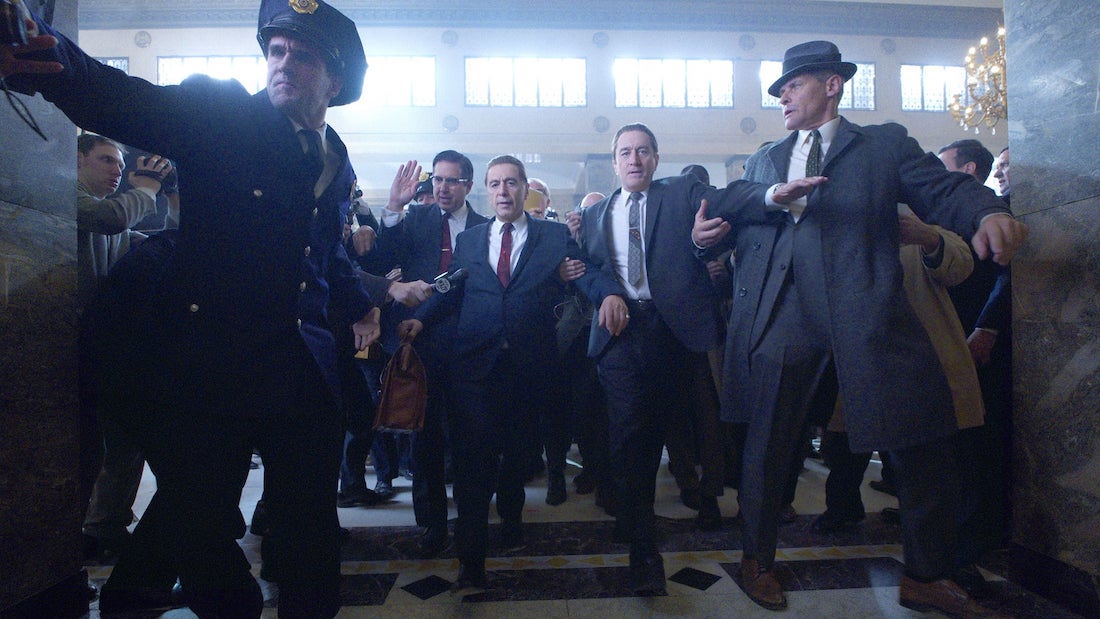 If one of the big Hollywood studios had made The Irishman, the final product would likely have been forced to have both its runtime and budget cut significantly. And why would a major studio let Scorsese spend millions to de-age his geriatric cast with VFX when hiring three young up-and-comers to play them as younger men would make more financial sense? In short, a film so widely criticized by industry insiders for its unconventional release and its director’s deal with the Netflix devil wouldn’t have become what it is if traditional choices had been made.

The Irishman is a slow-burn drama that combines factual events of the mid-20th-century with speculation and outright fiction. Unquestioned reality is intertwined so seamlessly with questionable details about events and characters that the most discerning minds will likely be burning a hole in Google looking for the truth afterwards. 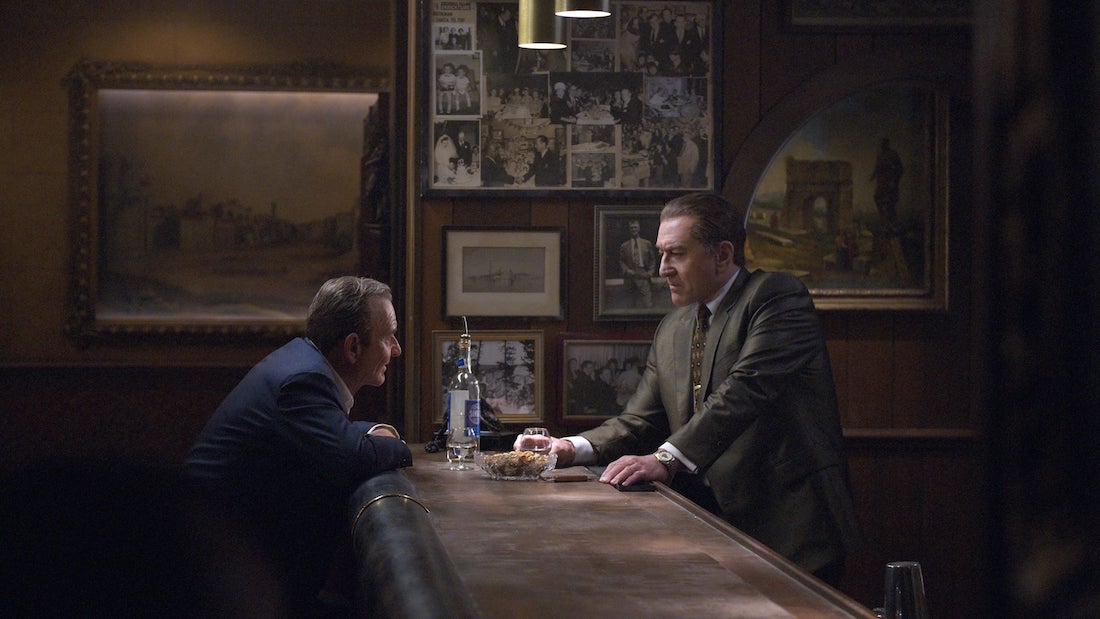 The film’s an adaptation of I Heard You Paint Houses, a 2004 memoir by former mafia hitman Frank Sheeran, who claimed to have worked for decades for the Bufalino Crime Family. Sheeran made many bold claims in his controversial memoir, easily the biggest centring around the fate of legendary union boss Jimmy Hoffa. The movie centres on Sheeran (Robert De Niro) and his journey over many decades, told through a series of flashbacks as Sheeran and his long-time buddy Bufalino (Joe Pesci) are making a round trip from Philadelphia to Detroit.

While The Irishman doesn’t have the crisp pacing of Scorsese’s mob classics like Goodfellas (1990) and Casino (1995), it does manage to keep audiences engrossed even if I sometimes found myself feeling impatient. It didn’t have me on the edge of my seat like Goodfellas or cringing through my fingers like Casino. 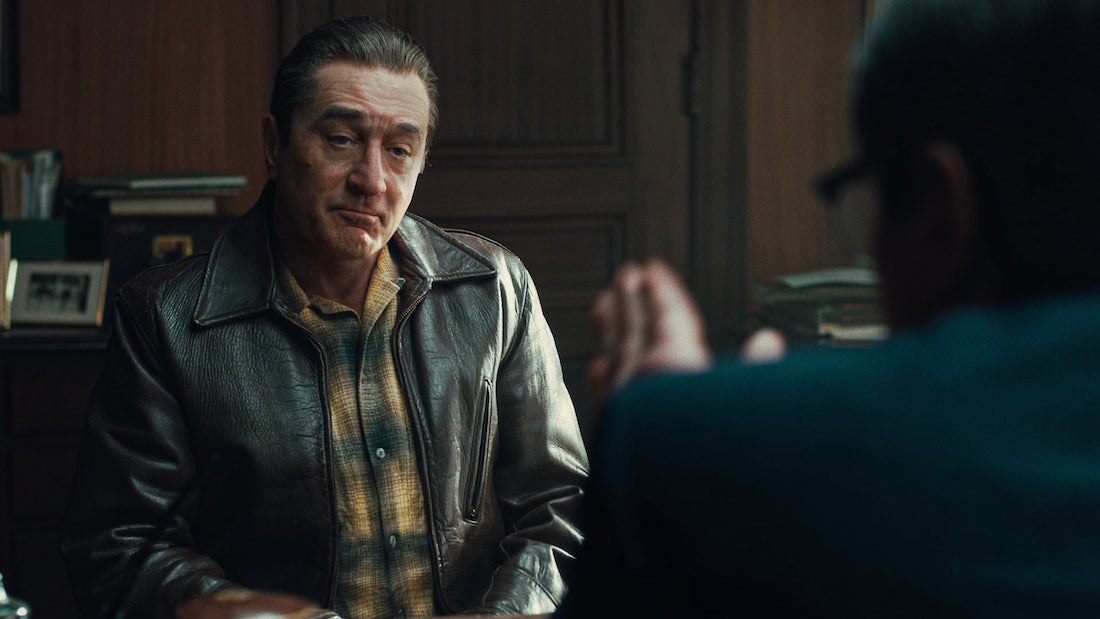 The Irishman lacks the flash and pizzazz those films displayed. There’s nothing glamorous about mob life this time around, at least not through the eyes of Sheeran. Granted it could be a product of storytelling from Sheeran’s point of view, but he’s portrayed as far less diabolical than characters the mafia types De Niro’s played in the past. At times he seems to stumble into circumstances that draw him deeper into the mob life much the way Forrest Gump stumbled through history. And like Gump, Sheeran comes off as a bit of simpleton at times—unaware or unable to appreciate the magnitude of the events unfolding around him.

In some ways, this makes Sheeran more sympathetic than viewers would likely be inclined to be. In a film like this, there’s no clear-cut hero—but often we watch beloved characters become victims of their own poor choices. Scorsese, historically, has been fond of this method of framing his central characters, and The Irishman is no exception. 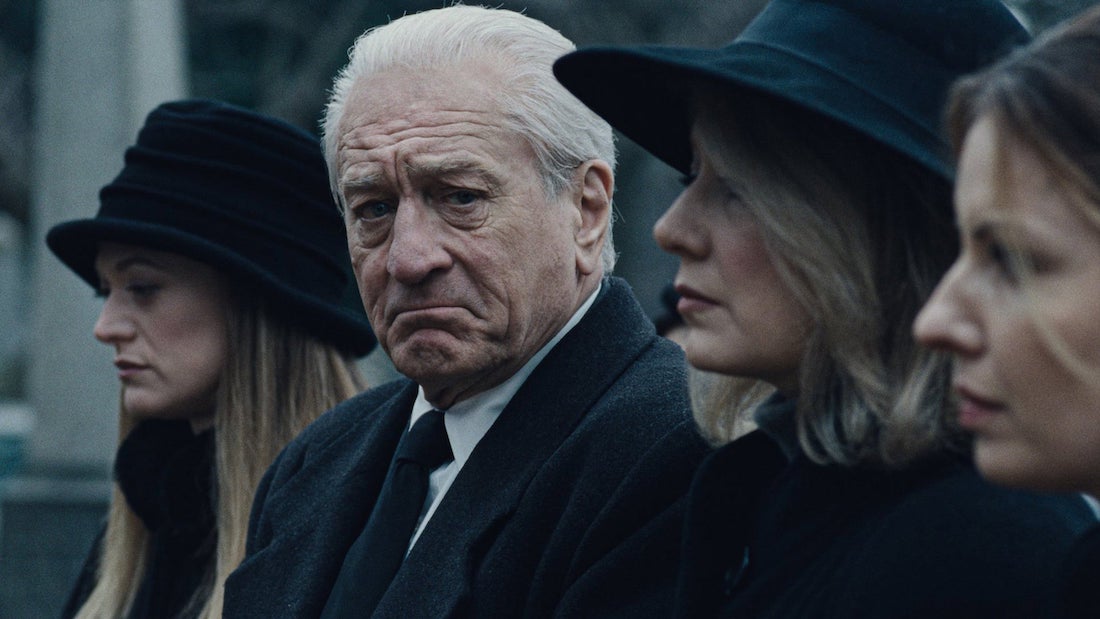 The flashback-style of the prose, which uses several “older” versions of Sheeran to tell his life story, can be a bit head spinning at times. For the first hour, Sheeran’s importance to anything bigger than a local mob in the 1960s isn’t really evident…. then Jimmy Hoffa (Al Pacino) enters the scene and Sheeran’s life takes a sharp turn.

Pacino delivers what’s probably his strongest screen performance in more than a decade as the famed union organiser. His portrayal of Hoffa isn’t just that of a man driven by a mission to organize his fellow working-class “brothers”, but an egomaniac who’s always counting the ways world events will impact him. He’s obsessed with the Kennedys (although Sheeran contends the obsessions were mutual) and convinced Jack and Bobby are out to get him. 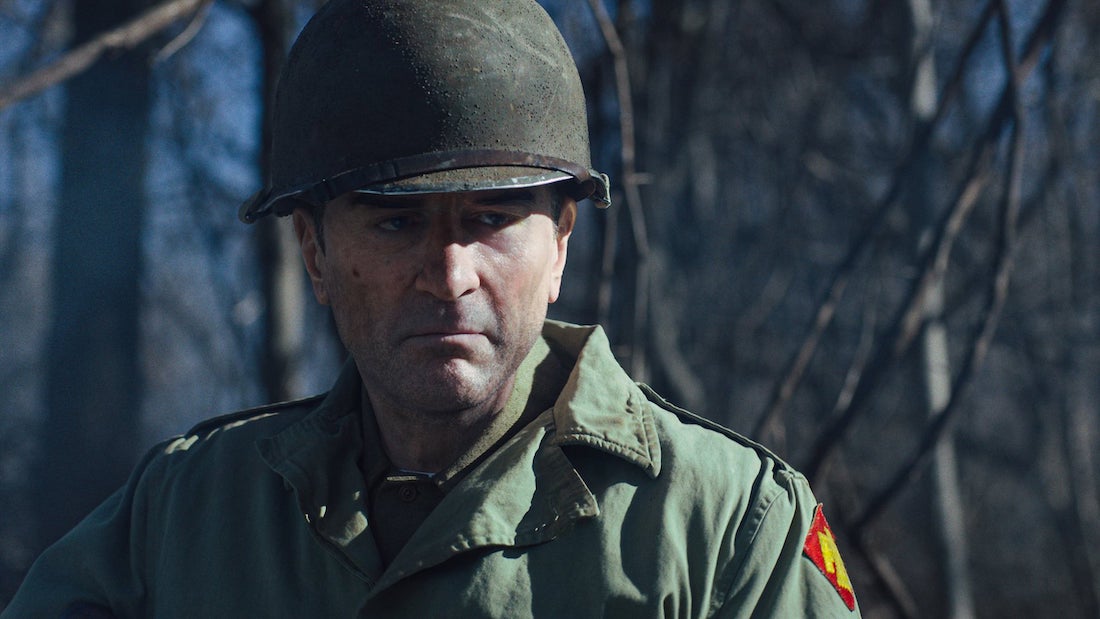 Hoffa was central to the story of the mob’s rise and fall—not merely because of his control over so much of organized labour (specifically the vital trucking industry), but also because Hoffa controlled the union pension. That billion-dollar fund would provide key financing to many of the mob’s biggest “legitimate” businesses including the casinos in Las Vegas. Where banks wouldn’t lend money, Hoffa did and plenty of people took a cut along the way.

On the recommendation of Bufalino, Sheeran becomes Hoffa’s right-hand-man. He’s right next Hoffa for some of the most pinnacle moments of his life, serving more as a security blanket to Hoffa than as an adviser. But Sheeran, as he would tell it, was more than just some Irish muscle for the union boss. He and Hoffa were close friends and whenever things got tough, Hoffa wanted Sheeran next to him.

Pacino’s Hoffa doesn’t fashion himself as a gangster, even though he keeps close company with them, but as something more. He despises the Kennedy’s but envies the way they’re worshipped by millions. And when he’s released after a relatively short prison stint, Hoffa is singularly focused on one thing: getting the union back. 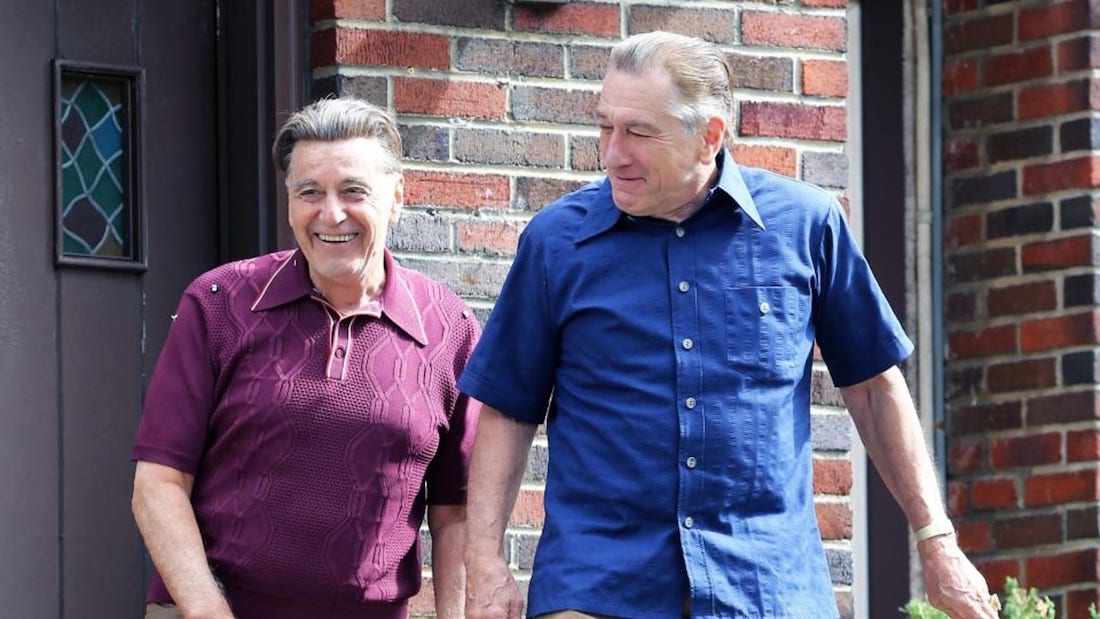 All the while, Sheeran’s both tentative observer and active participant to these events. And his loyalty is challenged when Hoffa and the mob no longer need each other.

In addition to Pacino’s standout performance, Pesci delivers what would likely be one of the most underappreciated performances of his career. An actor best-known for his gregarious antics and flavorful characters, Pesci is muted to the point of brilliance. The best “lines” he gives in the film are unspoken and delivered through a depths of nonverbal emotion that can only be found when an actor gives himself completely to a role.

Bufalino is a man of few words who carries darkness just behind his eyes. And it’s not the kind of role I would not have imagined Pesci would be perfect for. But that’s why it works so well, and credit goes to Scorsese for realising this and for Pesci to stretch himself beyond his usual repertoire. The role is a real stretch for him and he pulls it off magnificently. 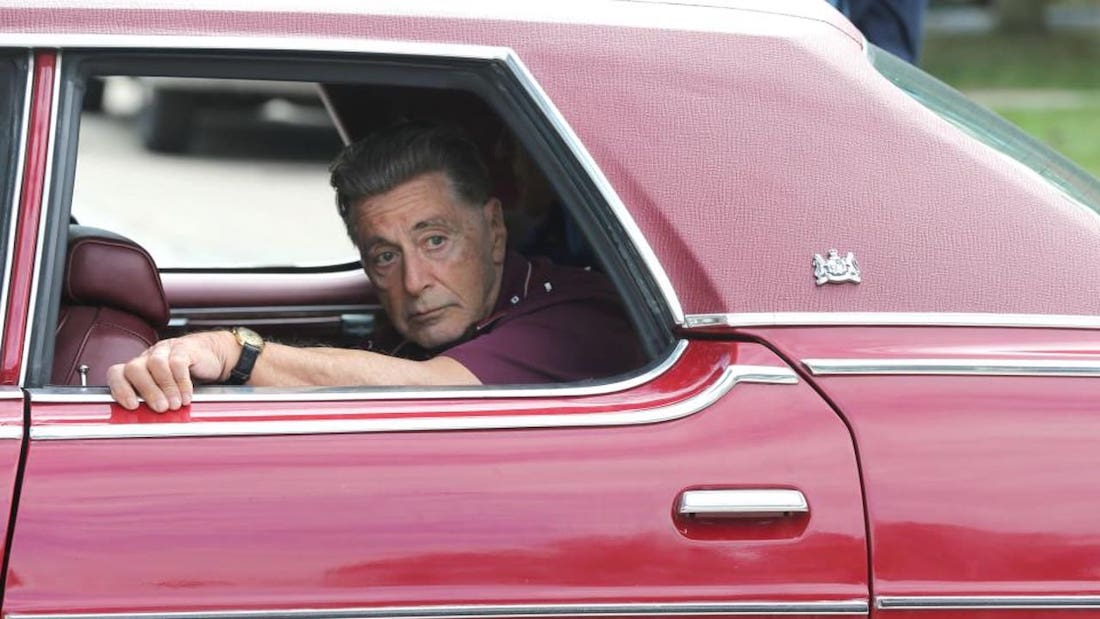 In the end, it’s not the individual performances of the three leads that make The Irishman noteworthy. It’s not just another mob film. It’s not just another story of an ageing hitman riddled with regrets. The Irishman is a story about something at the core of the human condition: loneliness. Not merely situational loneliness, but truly being alone. The kind of loneliness a man’s left with after a lifetime of decisions that pushed away those who loved him. The kind of loneliness a man finds himself in after he’s outlived the companions he spent decades with. It’s the kind of loneliness that brings a coldness that scares even the toughest among us as we stand at the edge of our own mortality.

That’s the genius of The Irishman and that’s why the film is worth 209-minutes of your time.

It’ll be the subject of much speculation how The Irishman plays with Academy voters in a few month’s time. On its merits alone, this film ranks as one of the best of the year. How the controversy around its short theatrical run and Netflix afterlife will impact those decisions is unclear. What is clear is how Scorsese’s shown that, given the proper amount of latitude and support, great filmmakers can still make great original films… for whatever platform. 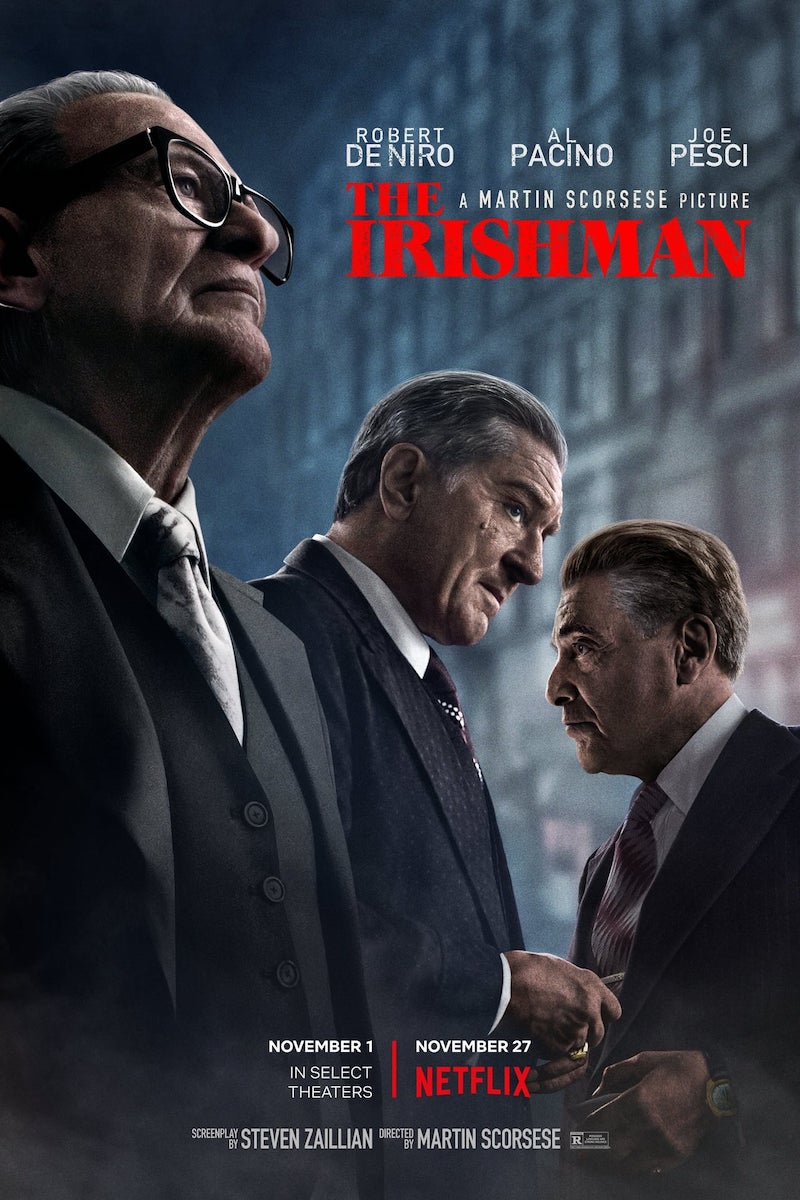 Written By
Jeffrey Bricker
More from Jeffrey Bricker
Teenager Alex Rogan finds himself transported to another planet after completing The...
Read More