After five cacophonous Transformers movies from Michael Bay (Armageddon), the prospect of a spin-off focusing on Bumblebee didn’t excite me. Even knowing it would be set in 1987 didn’t help, as the ’80s have suddenly become overexposed thanks to all the filmmakers who were kids during that decade trying to relive their youth. But when it was confirmed Bay would only be producing, with Travis Knight (Kubo and the Two Strings) making his live-action debut, directing a screenplay by Christina Hodson (Birds of Prey) that emphasised the characters… I was willing to give this a shot.

Bumblebee works as a smaller-scale prequel to Bay’s loud quintuple, rewinding the timeline two decades before Sam Whitwicky found Bumblee disguised as a yellow Camaro. The movie opens on the climax of a civil war between the Autobots and Decepticons on their homeworld of Cybertron, with Optimus Prime (Peter Cullen) leading an evacuation after ordering his scout B-127 to set up a base of operations on a planet called Earth ahead of them regrouping there. This appears to go against the “secret history” of the Transformers co-existing with mankind since Arthurian times, outlined in Transformers: The Last Knight (2017), but who cares. 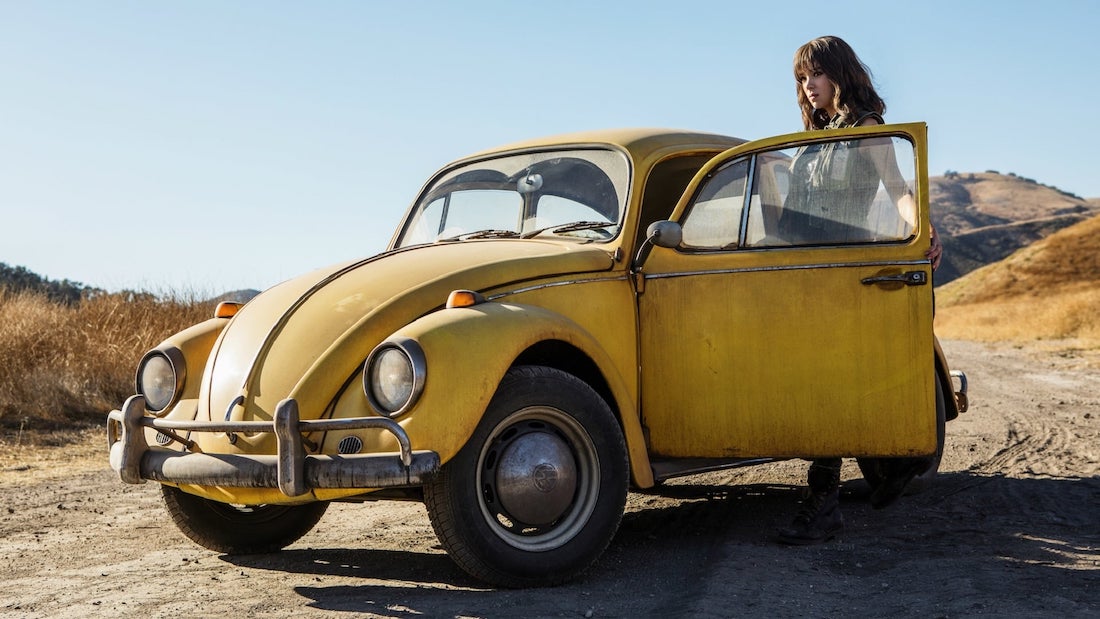 In many ways, Bumblebee is just a quieter remake of Transformers (2007), as it once again focuses on a teen on the cusp of adulthood wanting to assert their independence by owning a car. The differences between Charlie and Sam is that Charlie’s a girl, her father’s recently died, she’s lost her chutzpah, she doesn’t get along with her mother (Pamela Adlon) now, she fights with her little brother Otis (Jason Drucker), she dislikes her passive-aggressive stepdad, she’s into all sorts of cool music, and she works a menial job on a hot dog stand that provokes the ridicule of high school ‘mean girls’. 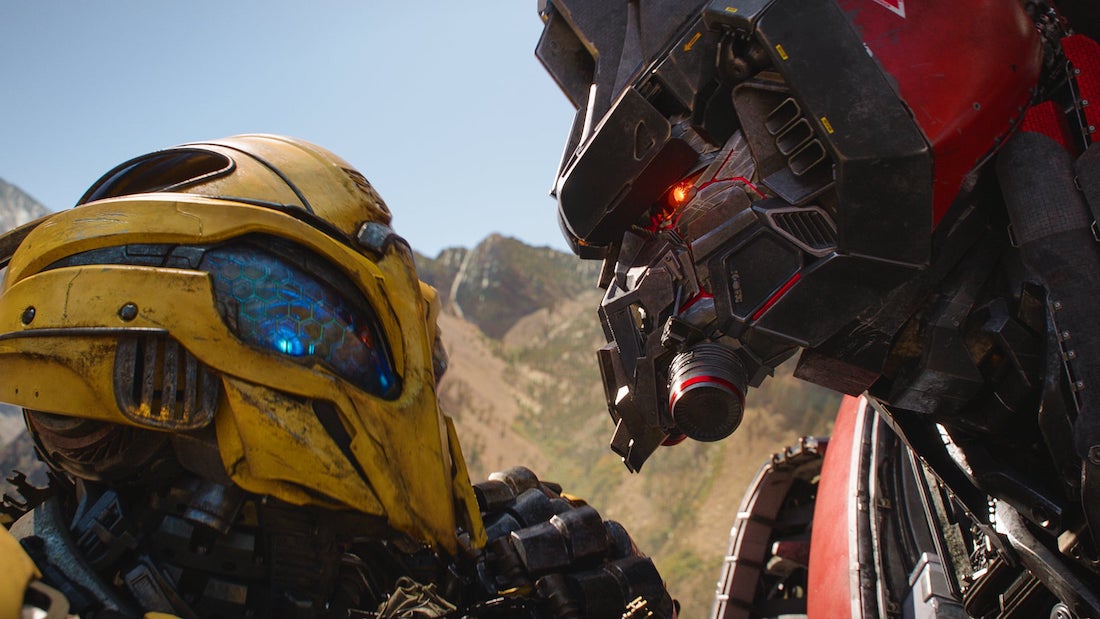 After finding the VW Beetle and realising it’s actually a sentient robot from outer space, Charlie’s inevitably gets drawn into the interplanetary battle between Bumblebee’s Autobot friends and two Decepticons called Shatter (Angela Bassett) and Dropkick (Justin Theroux), who want to interrogate Bumblebee about Optimum Prime’s whereabouts. Oh, and they also manage to convince Sector 7 that Bumblebee is a mutual enemy…

This is the best live-action Transformers movie of the six released, at least in terms of the taut storytelling and likeable performances. The action’s also easier to follow because Knight ensures the robots have more colourful metal plating on their bodies, which helps distinguish them from each other. The ’80s setting also means there’s a plausible excuse for the change in shape and style, as ILM is clearly using the designs of the original Hasbro toys as their templates. It also has jokes that make you chuckle not wince, a story that doesn’t get too ludicrous or overblown, and there’s no sexism or racism. I dread to think what kind of character Charlie would’ve been in Bay’s hands, following Megan Fox and Rosie Huntington-Whiteley. 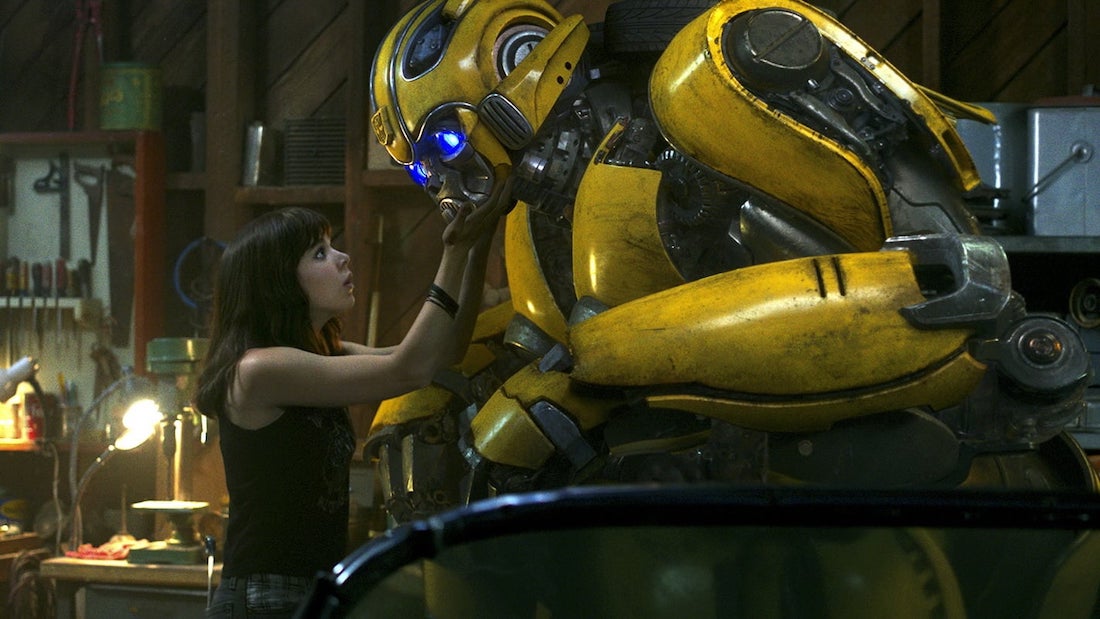 It’s also clear Knight’s more interested in the relationship between Charlie and Bumblebee than duelling robots and spectacle for spectacle’s sake. Instead, there’s a real story here about a young girl struggling to get over the loss of her dad and become a woman, who finds exactly the kind of male presence in her life she needs with Bumblebee—someone who encourages her and gets the fires burning again. The material and how it’s treated by the actors also touches on moments and alien-friendship dynamics familiar from E.T: The Extra-Terrestrial (1982) to The Iron Giant (1999), with a touch of Big Hero 6 (2014).

However, this is still the sixth Transformers movie released since 2007. There’s reduced appeal in seeing photorealistic robots transform into vehicles and punch each other, and Bumblebee’s arc is very predictable. It’s a charming and efficient version of a tale we’ve seen countless times before, only with Transformers iconography involved. And it’s possible the smaller scale will disappoint those who came to enjoy the grandiose ‘Bayhem’, no matter how incomprehensible the action could be thanks to his chaotic use of VFX. Bumblebee cost $135M to make (which isn’t much behind Transformers’ $150M budget, but far less than the $260M the fifth instalment cost), so it looks cheaper than we’re used to seeing. 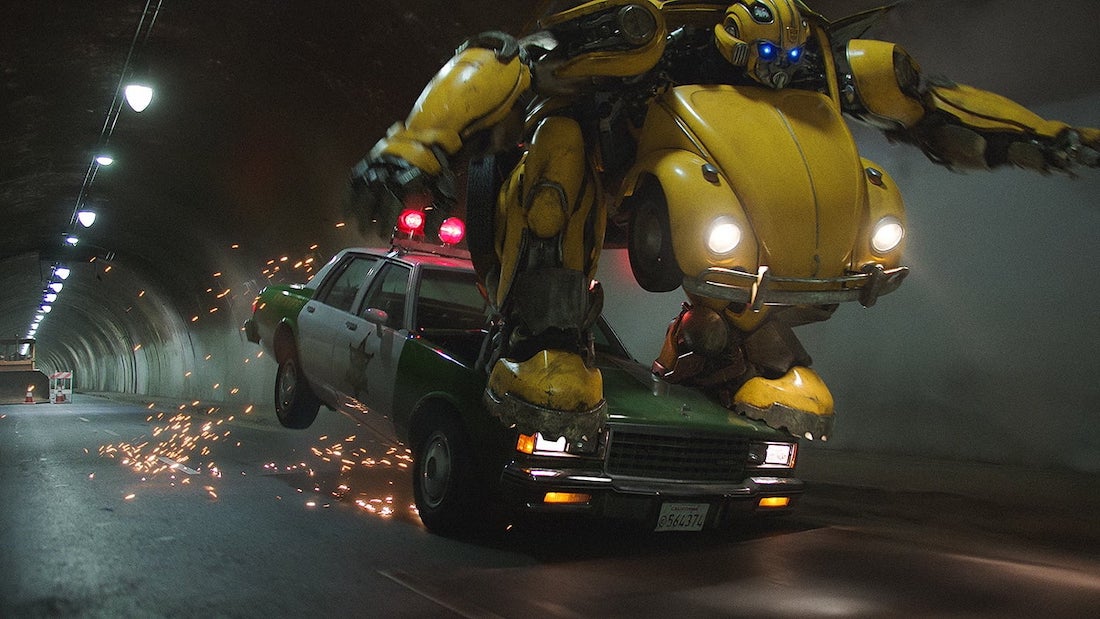 After The Last Knight became the lowest-grossing Transformers movie, it makes sense for Paramount Pictures to do something more cost-effective with a different tone. Bumblee does have a lot of charm and the ’80s flavour works nicely, set against a good ensemble of actors. There are lots of touches I enjoyed, like how Charlie doesn’t kiss her next-door neighbour love-interest Guillermo “Memo” Gutierrez (Jorge Lendeborg Jr.) in the final shot, which is what always happens in movies like this… but, no, they’re not at that stage in their relationship yet, so why would they? Knight just has a better handle on people and how to put together a movie that works, without having to rely on the VFX work to keep audiences awake.

That said, Bumblebee doesn’t do much that’s fresh and unique. It’s a patchwork of other movies and ideas, so my attention often wandered despite how efficiently it went about its business. Paramount has apparently retconned their intentions with Bumblee, so it’s no longer a prequel to Bay’s films but a reboot of the franchise. I can see why they’d want to do that given the tepid response to The Last Knight and the general convolution of the series, but I doubt audiences will be aware this is supposed to be a fresh start. But maybe it can find a way to be an X-Men: First Class-style saga set in the 1980s and 1990s, that’s technically a prequel but works as its own thing. And if they made another modern-day Transformers, with or without Bay involved, I’m hoping to see Charlie in her fifties. 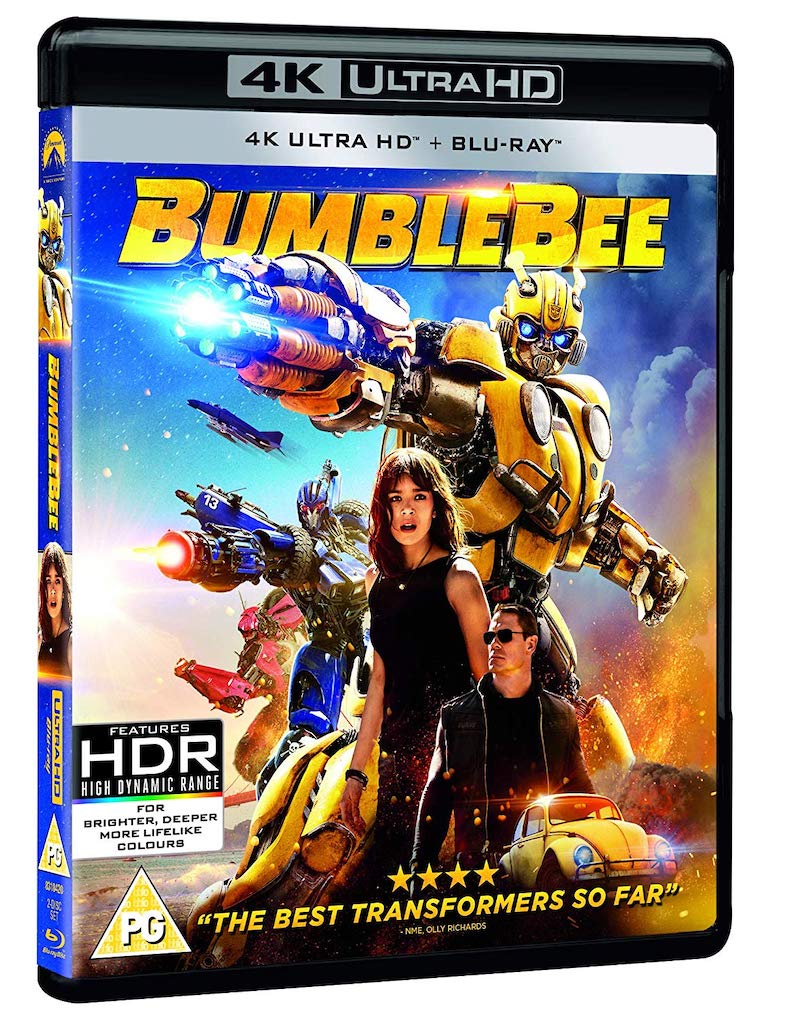 Bumblebee was shot on Arri Alexa cameras with a 3.4K resolution, but it used a 2K digital intermediate, so the HEVC H.265 encode on this 4K Ultra HD release isn’t night-and-day better than the 1080p Blu-ray. But it’s cleaner looking and details are defined better across the 1.85:1 ratio picture, with Dolby Vision HDR/HDR10 that results in brighter and more pleasing images in general.

The audio is presented in Dolby Atmos where available, downmixed to Dolby True-HD 7.1 otherwise. The height channels with Atmos give the soundstage more depth and power, best demonstrated during the action sequences. I wouldn’t say this mix was as aggressive and complex as Bay’s Transformers movies, but it’s on par at times, and the use of 1980s pop music means the aural experience is very enjoyable. The bass is great with the explosions landing with sofa-shaking booms, and dialogue remains crisp and distinct at all times.