Sherlock’s almost manic necessity for tricky narrative transition calms down a bit this week, fortunately. There are less wipes, dissolves, and multiple POVs cluttering up “The Lying Detective”, and it’s all the better for it because Steven Moffat’s script and the fine performances are the stars here, as Sherlock (Benedict Cumberbatch) goes into a drug-fuelled meltdown and Watson (Martin Freeman) spirals through the stages of grief and guilt with an internally realised version of his late wife Mary (Amanda Abbington) popping up to help him.

It’s the latter stages, and Watson’s anger with Sherlock, that provide the much-needed emotional heft of the story, and Freeman offers a finely judged reflection of Watson’s eventual reconciliation with his sense of self. What’s equally important is that Amanda Abbington is effectively playing a version of Watson, in collaboration with Freeman, as Mary emerges from his subconscious and they undertake a hide-and-seek process of survivor therapy. It also involves Watson’s new therapist, who’s more than she seems…

To get us to the expiation of repressed grief and anger in Sherlock and Watson’s “it is what it is” cathartic, tearful embrace, Moffat, with his penchant for in media res storytelling, uses the false-reality of Sherlock’s deliberately induced narcotic high to fold and twist the narrative with his customary themes about memory, time, and doubles. 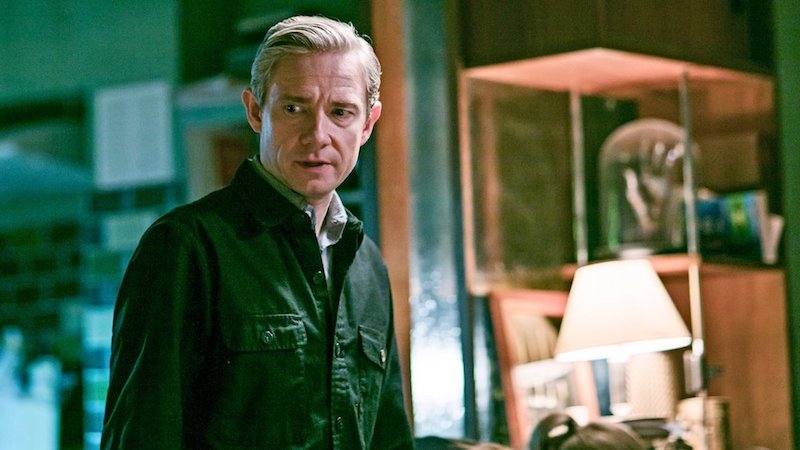 However, it’s the use of false narrative that he delights in here; creating an entire scenario about Sherlock’ s fall from grace and attempt to expose a serial killer, with the intention to deceive us about its true purpose. By doing so, he’s true to the essence of the Sir Arthur Conan Doyle’s source “The Adventure of the Dying Detective”—wherein a supposedly dying Sherlock sets a trap for Culverton Smith, to expose him as his nephew’s murderer, that relies on convincing Watson he’s at death’s door and must bring Smith to him.

In “The Lying Detective”, Moffat plays on the episode’s title and Sherlock creates a situation which places his own life in such extreme danger that John Watson has no choice but to step in and save him, because, as his deceased wife entreated in her posthumous message, Sherlock’s task is to “save John Watson”—to preserve Watson’s sense of decency from the poison of his own guilt and grief, and to ensure he holds himself to a reasonable standard.

Denial plays a big part in this story. It’s there right from the start, as Watson leaves to visit his new therapist and holds a conversation with his dead spouse. “John, you’ve got to remember, it’s important. I am dead,” the ghostly wife reminds him. Sherlock and Watson spend a great deal of the episode hiding from themselves, digging deep to retrieve and, in Sherlock’s case, accept their humanity. Then there’s Watson denying himself the possibility of a relationship in the aftermath of Mary’s death (even though it turns out to be far, far more twisted than that), and Mycroft’s (Mark Gatiss) avowal to never to mix pleasure with business and have his coded queerness suddenly challenged by the flirtatious Lady Smallwood (Lindsay Duncan). 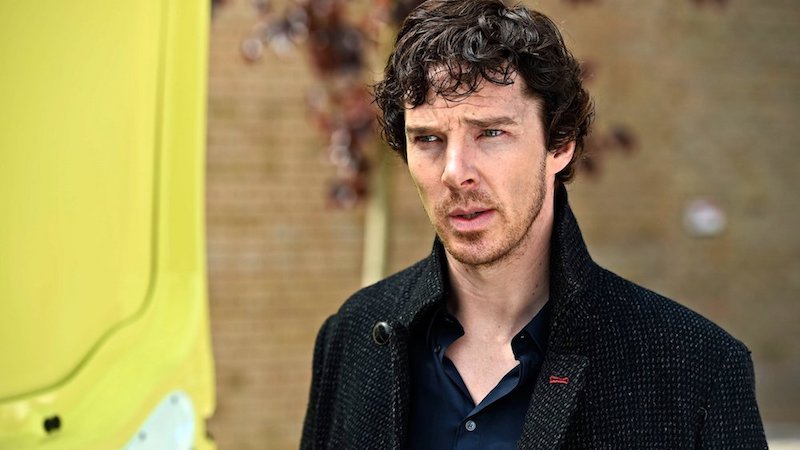 Characters are, as Watson’s therapist describes his behaviour, “looking away rather than looking at”, and when a monster like Culverton Smith (Toby Jones) inveigles its way into society, Moffat widens his investigation into the public’s mass denial and its willingness to look the other way. Front and centre, as a Jimmy Savile analog, is manipulating entrepreneur Smith. All teeth and false charm, he does fun runs, sells cereal, supports charities, and funds the building of a hospital wing. A truly sinister touch reveals his true purpose is to access his “favourite room” with his own set of keys and a secret entrance to bump off patients on a pleasurable whim.

As Sherlock acknowledges, the monster Smith hides in plain view while the culture around him exhausts itself normalising his activities and inculcates a self-induced social amnesia. This “elective ignorance” is metaphorically presented in the episode’s opening sequence, where Smith wipes the memories of his board of trustees as he confesses his intention to commit another murder. “The Lying Detective” often explores this to bilious, suffocating effect, showing Smith as a bullying, threatening force whose celebrity is considered so powerful that no one dare challenge him.

The absence of Sherlock in Watson’s life is shattered as an expensive sports car wreaks havoc outside the home of his therapist and, just for a moment, we expect Sherlock to stumble out of the car. However, Moffat postpones and tantalises us. We don’t get to see the car’s occupant until the narrative folds back and we’re left hanging on as Culverton Smith erases the memories of the executives in his boardroom. Memories and secrets are not just Smith’s trade. Hidden away are various skeletons in the Holmes closet, too, hinted at in the flashes of childhood memory, the recurring theme of the East Wind, and the still mysterious ‘Sherrinford’. 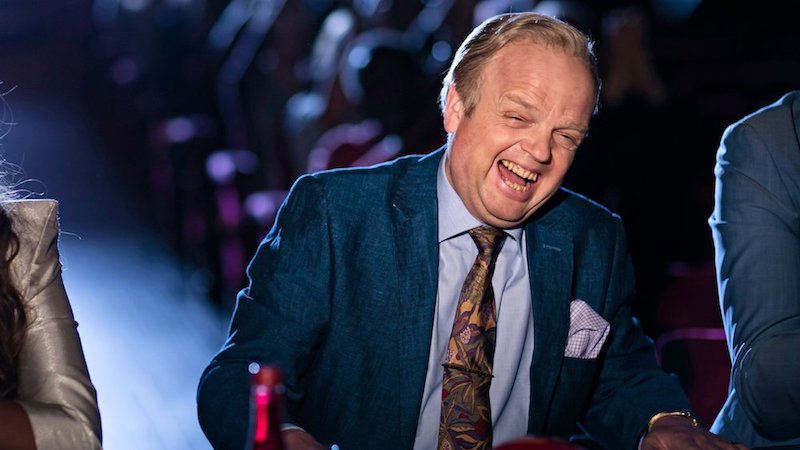 When Mrs. Hudson (Una Stubbs) emerges from the sports car and entreats Watson on the doorstep to help the Sherlock she’s bundled into the boot, it’s the first of several sleights of hand during the episode. Not that we know it upon first viewing, but the woozy, hallucinatory vision of Culverton’s daughter Faith (Gina Bramhill) dredging her own drugged memory to scribble down a few clues to what Smith was confessing to in the board room, is probably Sherlock’s heroin-addled view of what eventually comes to pass. Faith is sitting in front of him, asking him to help her find out who Culverton is going to kill. Or is she?

An elaborate long game ensues as Sherlock deliberately places himself in harm’s way. Apparently off his tits, but still able to apply his deductive reasoning, after Faith’s visit he takes her for a walk (spelling out a number of obscenities to brother Mycroft keeping tabs on him), works out the intricacies of the note offered as evidence, and accuses Smith of being a serial killer. “Do you ever want to look in the mirror and see someone else?” asks Faith of Sherlock as he applies his “reflex” to appraising her appearance and background. Appearances can be deceptive.

Sherlock’s kitchen resembles something out of Breaking Bad and he appears to have acquired his own Jesse Pinkman, cooking up among the pots and pans during his period of drug-induced deterioration. Cumberbatch clearly revels in the degradation the character’s embraced and Baker Street takes on the hues and appearance of what Withnail and I once described as a “sulphur-stained, nicotine yellow and fly-blown lung.” Sherlock mentally twists and turns in this messy environment and appears to be out of control. Yet, we discover he’s at least a fortnight ahead of John Watson, able to pinpoint exactly where he would be at a certain time to launch his elaborate con to hook the slippery Culverton Smith. 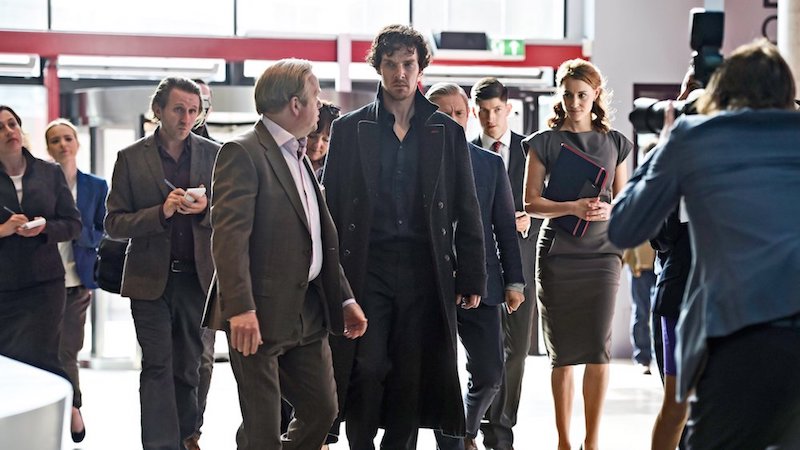 As the two main characters set out on a collision course, it’s the women in the narrative that steer them in specific directions. Mrs. Hudson (finally given much more to do this week) is no mere housekeeper, Mary lives on as a projection of John’s troubled psyche, Irene Adler keeps in text with Sherlock on his birthday (“The posh boy loves the dominatrix. Never knowingly under-cliched.”), Faith—as is revealed in the striking climax of the story—is not quite who we think she is. She becomes three women in one, brilliantly played by Sian Brooke. She’s the flirty bus passenger almost luring Watson into infidelity (so, she was important), his therapist, and a bogus version of Smith’s daughter before peeling back her disguise to triumphantly declaring she’s Eurus, Sherlock’s bad, bad sister.

It’s a bit odd that neither John nor Sherlock could actually see through Eurus’s various avatars, but it made for a cracking climax. The triumph lay in Brooke’s ability to fool some of audience some of the time, even as Moffat predictably sticks to using the dodge of brother Sherrinford to, dramatic drum roll, reveal it’s the sister you should be worried about. 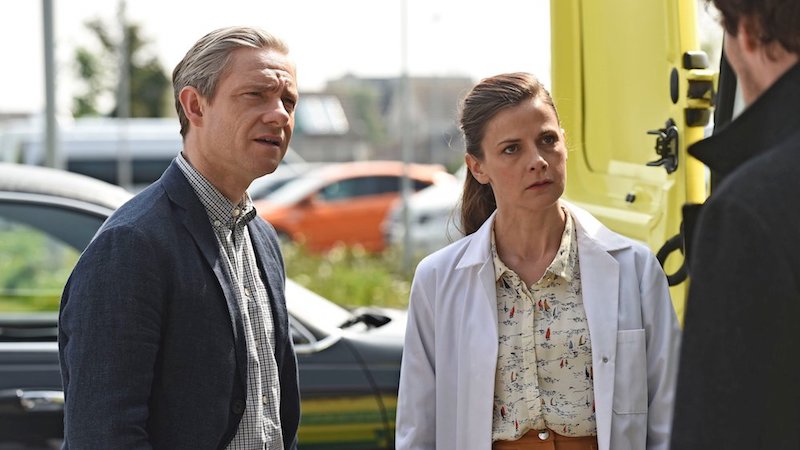 So, Sherlock wins again and controls the situation with supernatural ability, luring Culverton Smith into his “favourite room” and fooling him into thinking Sherlock was defeated after insanely attacking him at the hospital. Revealing your daughter had never met Sherlock in the first place and that she looked different enough from your drug-fuelled version of her would provoke that. Culverton thinks Sherlock can be removed by upping the painkillers and suffocation. The man who plays with dead things to get happy doesn’t count on the number three. After Smith gloats he found all three of Sherlock’s recording devices in the hospital room, Holmes comments that people often give up after the number three and wipes the smile off Smith’s face.

Toby Jones is good as Culverton, and at times you think he’s close to overplaying the creepy Northern ebullience, but then with so much of the character’s behaviour patterned after Savile (that other creepy old charity fundraiser with a Northern accent who enjoyed visiting hospitals), his performance slowly turns the blood to ice in your veins. Mind you, we mustn’t forget Culverton Smith’s inspiration, H. H. Holmes, the notorious Chicago serial killer who gets several name checks throughout the story.

Talking of running cold, we now have all those references to the East Wind picked up in the reveal of Eurus—named after the Greek God of the East Wind. Way back in “His Last Vow” she was mentioned by Sherlock as a force to be reckoned with: “the East Wind gets us all in the end. It’s a story my brother told me when we were kids. The East Wind—this terrifying force that lays waste to all in its path. It seeks out the unworthy and plucks them from the earth.” Perhaps she’s also the end point of Jim Moriarty’s own posthumous con, the evil Watson to his devilish Holmes, and who may also have to keep looking away if his ghost is advising her from the afterlife.