In the early 1920s, Germany was entering a period of liberation and hardship. During that decade, the empire became a republic, social norms loosened, inflation rose steadily, and the country saw its cinema’s golden age. All of this, of course, hit a brick wall the moment the Nazis seized power in 1933, but, while it lasted, the output of the German film industry throughout the silent era and the early days of sound was nothing short of astonishing. Be it the comedy of Ernst Lubitsch, the romanticism of F.W. Murnau, or the social realism of the New Sobriety movement, Germany was producing creative work unrivalled on the continent. It’s arguable that this new vitality all started with Robert Wiene’s masterpiece The Cabinet of Dr. Caligari (1920). 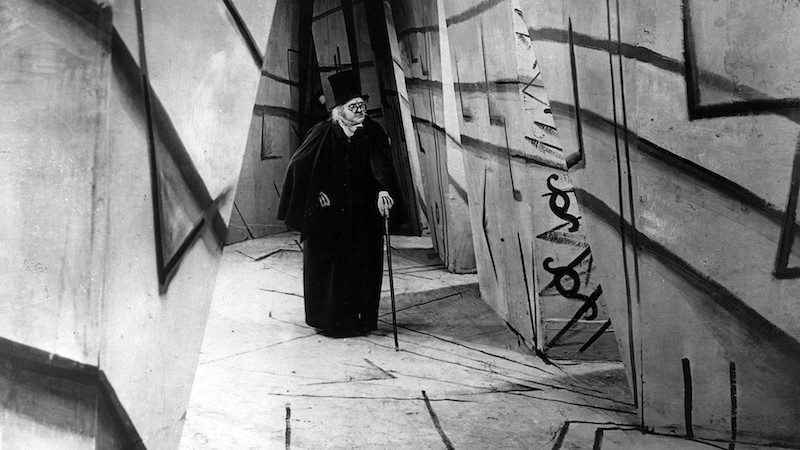 Whether the film’s authorship belongs to Wiene at all is famously contested. It could just as easily be called set designer Hermann Warm’s The Cabinet of Dr. Caligari, or Carl Mayer and Hans Janowitz’s. The set designer demands a mention when discussing the film’s authorship because of the fantastical expressionistic sets. More so than any other German expressionist film, The Cabinet of Dr. Caligari commits to a world twisted and bent out of shape. Rather than just being a framing device for the ramblings of a mad character, these sets fit their world; one of petty bureaucrats, ineffective police officers, and murderous intentions.

The film starts with Francis (Friedrich Feher) sitting in a walled garden and discussing his life. A flashback delves us into the world of Dr. Caligari (Werner Krauss) and Cesare (Conrad Veidt), the doctor’s somnambulist, whom he tours village fairs with. Francis encounters the pair when he and his friend Alan visit their fairground tent. Caligari tells the crowd Cesare knows the past and can see the future, inviting the audience to test his claim. When Alan asks how long he’ll live, Cesare reveals he has only until dawn. Alan’s expression is one of horror which turns into a maniacal grin; when dawn breaks, we see only his shadow wrestling his knife-wielding murderer. 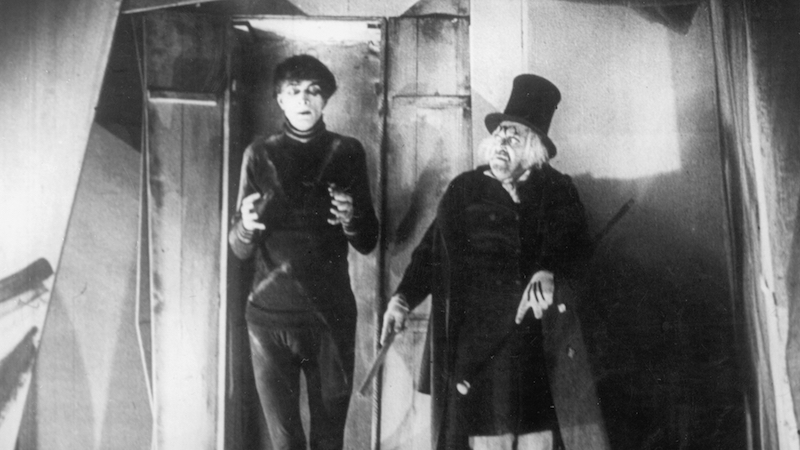 The somnambulist theme is one that was used a few times in films of the period. A sinister figure using a sleepwalking vessel to carry out acts of murder would have political parallels in Germany’s not-too-distant future. In From Caligari to Hitler, the German film theorist Siegfried Kracauer went as far as to say the cinema of the Weimar Republic era predicted the inevitable rise of fascism in Germany. One of the extras included in this Masters of Cinema release from Eureka Video is a feature-length documentary entitled From Caligari to Hitler: German Cinema in the Age of the Masses (2014). It provides a useful overview of Weimar cinema in general and Kracauer’s specific thoughts on the era.

Francis might be one of cinema’s first unreliable narrators, but readings of the film vary wildly. Twists and reveals abound, and the finale’s asylum setting seems more than appropriate. The only question is whether Caligari should be running the place or confined within it. The final expression on Caligari’s face implores us to question what we’ve seen one last time; a device that’s been rendered ubiquitous by horror films over the course of the 90-odd years since. Thanks to the precedent set by The Cabinet of Dr. Caligari, other masterpieces of the era (such as Fritz Lang’s Mabuse films) were made possible, and its varied influences on horror cinema can be seen to this day.