Films depicting the inner workings of the internet are few and far between. The internet is a seedy place that sprung out of hopefulness and science; a complex digital web that’s hard to understand and even harder to explain. That makes Ralph Breaks the Internet a pioneer in this field—a children’s animated film tackling an intangible environment.

In that sense, Ralph Breaks the Internet is a triumph; Walt Disney Animation Studios has produced one of the smartest, yet still easily digestible, films about the internet ever made. In this sequel, taking place in real time six years after the first Wreck-It Ralph (2012), Ralph (John C. Reilly) and Vanellope (Sarah Silverman) travel into the internet to find a replacement steering wheel for the Sugar Rush arcade game. They’re looking for “eBay“, a term they heard in passing, but since they don’t understand how anything online works, they end up winning the bid by shouting random numbers and chalking up a $27,000 bill. The rest of Ralph Breaks the Internet revolves around them finding ways to earn enough money to pay for their purchase. 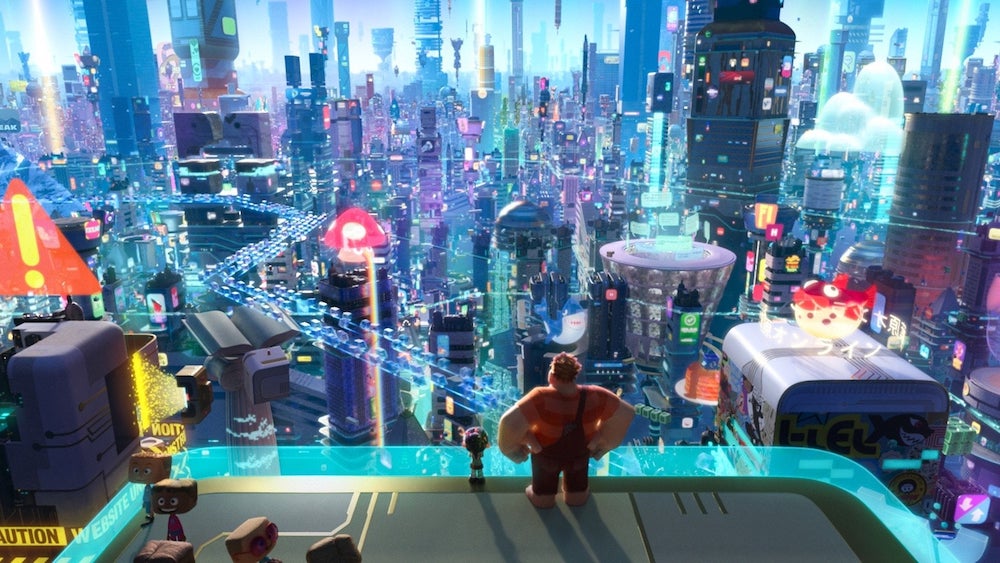 From the beginning, it’s a treat to watch the minute details included by directors Rich Moore and Phil Johnston. From their first foray into the WiFi router, to the way their pill-shaped bytes are tagged (by IP address), to the buildings that represent domains and the Mii-like avatars that represent real internet users, this film has done extensive research and isn’t afraid to get into the dark (and ugly) side of online culture. As an educational tool for children to learn about the world wide web, it’s informative and entertaining.

The overall plot is also very family-friendly, with themes revolving around the need to chase your dreams while still maintaining friendships with your loved ones. The directors don’t explicitly state this until about halfway through the movie, however, making its ‘moral of the story’ moments feel more natural and less insincere.

Wreck-It Ralph came out six years ago (a lifetime in animated movies), so much of the original 2012 audience might not be children anymore. So in order to also entertain the teenagers and parents on a return trip, Disney brings out the big guns to push our nostalgia buttons, only rivalled by Ready Player One (2018). The movie includes almost every asset under the Walt Disney Company umbrella. That includes *deep breath* Storm Troopers, C3-PO, R2-D2, and Yoda from the Star Wars saga, Buzz Lightyear and Baymax from Pixar, Iron Man and Rocket Racoon from Marvel Studios, and a litany of other animated favourites—including some from Disney’s own Zootropolis and Snow White and the Seven Dwarfs, walking around and interacting within the movie’s Disney-owned website Oh My Disney. 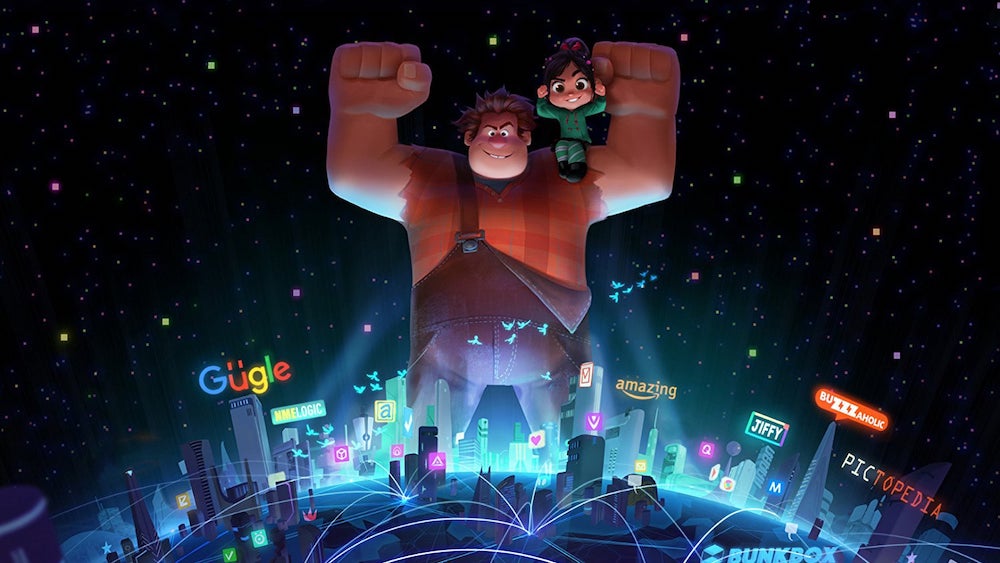 This in addition to the biggest pop culture treat we’ve ever seen from Disney: all 14 Disney Princesses, including Elsa and Anna from Frozen (2013), hanging out with Vanellope. That’s a big step for Disney to take because the story doesn’t include the princesses for the sake of it. It lets them make fun of their own circumstances (and origin stories) as female characters. There’s a level of self-deprecation quite unexpected from the House of Mouse, and it played like gangbusters in the cinema I saw it in. Everyone was entranced by the sight of all the Disney Princesses together in pyjamas, no matter their age. Nobody, not even the most jaded of adults or angst-ridden of teenagers could hate that scene… and that’s before a big musical moment!

At the same time, Ralph Breaks the Internet aims to make its depiction of the internet more palatable (and less “Disney”) to adults by making it more realistic. For example, the easiest way to earn fast cash includes both legitimate and illegitimate methods, and our protagonists don’t know the difference. As with the real internet, side quests often end up becoming main quests, and Vanellope falls in love with the gritty nature of internet gaming (through Gal Gadot’s speed-racer Shank). Ralph Breaks The Internet also ends up going into the dark web and uses that to form the base of the climax of the film.

This is when the cracks start to show. Up until the climax, the movie included scenes that were surprisingly mature and showcased the ugliness of pandering for ‘likes’ and ‘comments’, commenting on the distress it can cause people in the process. However, when it comes to resolving the conflict in the huge action scene, writers Johnston and Pamela Ribon, depend on ‘friendship and love’. It’s anticlimactic and turned the rest of the film into a more straightforward children’s comedy. 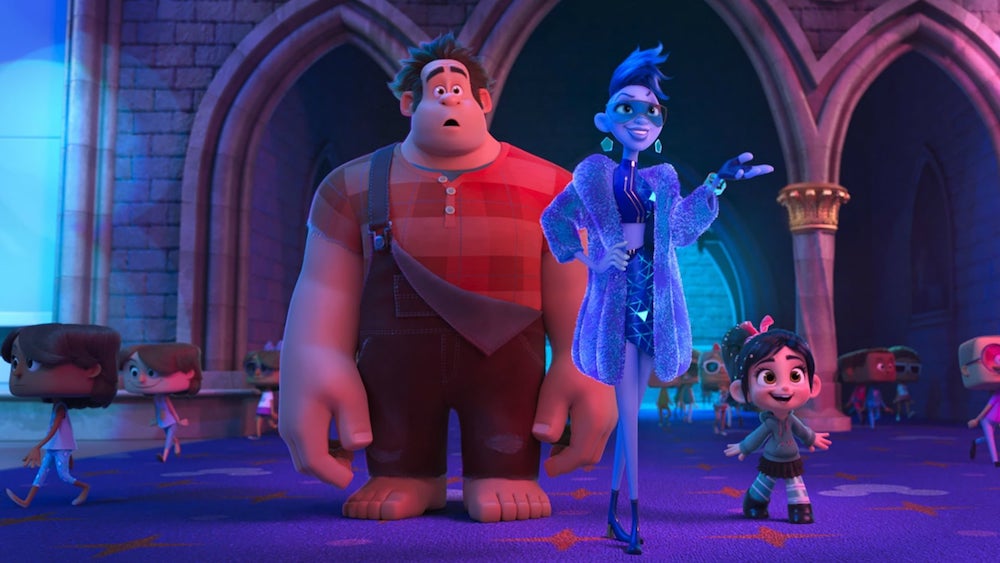 Does this mean I dislike it? Quite the opposite: I walked out very happy but there was also a nagging feeling it didn’t resolve well enough. As I reflected more on the film, I grew increasingly disappointed the writers glossed over everything by the end. The story makes us think about the ills of internet culture, but it doesn’t give an interesting solution beyond the platitude ‘friendship and love can cross any divide’.

It’s a situation where the writers backed themselves into a corner: by ensuring there’s something for everyone in Ralph Breaks the Internet, it proves impossible for the film to be a complete knockout. It leaves too many loose ends dangling, and you can’t help but wonder about them hours later.

In the end, though, for an animated family film tackling a tough topic about the wonders and horrors of the internet that’s shaped modern life, Ralph Breaks the Internet works incredibly well. It will undoubtedly entertain and delight you at some point, and that alone makes it worth seeing.