Roberto Aguirre-Sacasa’s edgier interpretation of Archie Comics’ Sabrina the Teenage Witch debuted in comic-book form in 2014, so this Netflix drama is more accurately a live-action adaptation of his reimagining. Confused yet? Whatever its provenance, considering Sabrina’s still best-known as a 1990s teen comedy, starring Melissa Joan Hart and a talking cat, there might be raised of eyebrows over this new style and tone.

Sabrina Spellman (Kiernan Shipka) is a spirited teenager living in Riverdale and attending Baxter High. She has a handsome boyfriend called Harvey Kinkle (Ross Lynch), an eclectic mix of school friends, a favourite teacher in mousey Miss Wardwell (Michelle Gomez), and a lot of strong opinions and a forthright attitude that frequently lands her in trouble. Oh, and she also has two aunts—stern Zelda (Homeland’s Miranda Otto) and bubbly Hilda (The Office’s Lucy Davis)—who worship The Devil. As does Sabrina’s pansexual English cousin Ambrose (Chance Perdomo), who’s now housebound after trying to blow up the Vatican. 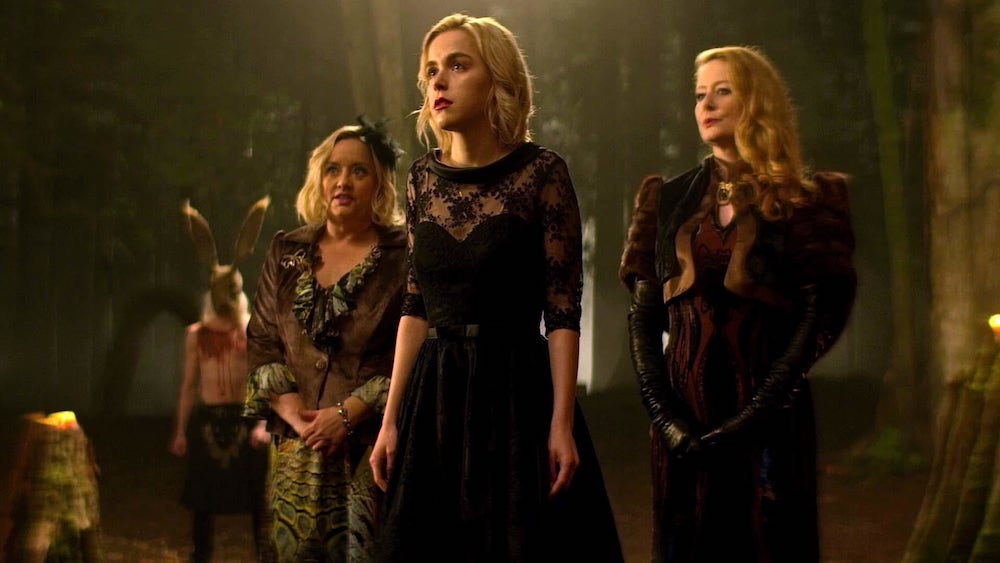 Her unusual family situation is because sweet Sabrina’s a half-witch, about to come to maturity on her 16th birthday, upon which time she’ll undergo a ‘Dark Baptism’ with the local High Priest, Father Faustus Blackwood (Richard Coyle), and sell her soul to the Devil in exchange for magical abilities and prolonged youth. It’s a literal Faustian Deal, which is ironic considering the second episode guest stars Daniel Webster (John Rubinstein) from Stephen Vincent Benét’s 1936 Faustian short story The Devil and Daniel Webster.

Part of the reason Chilling Adventures of Sabrina (hereafter CAoS) is on Netflix, rather than The CW alongside its sister series Riverdale, is that the streaming platform gives the writers enough leeway to indulge a darker sensibility and moments of grittier horror. I was struck by how hard the show leans into the tenets of witchcraft, as it doesn’t shy away from reminding us Sabrina’s family are actual witches. They don’t cackle and turn people into frogs, but neither is there too much Addams Family-style winking at the audience over their unorthodox behaviour. They’re normal people who made a choice to embrace the diabolical. 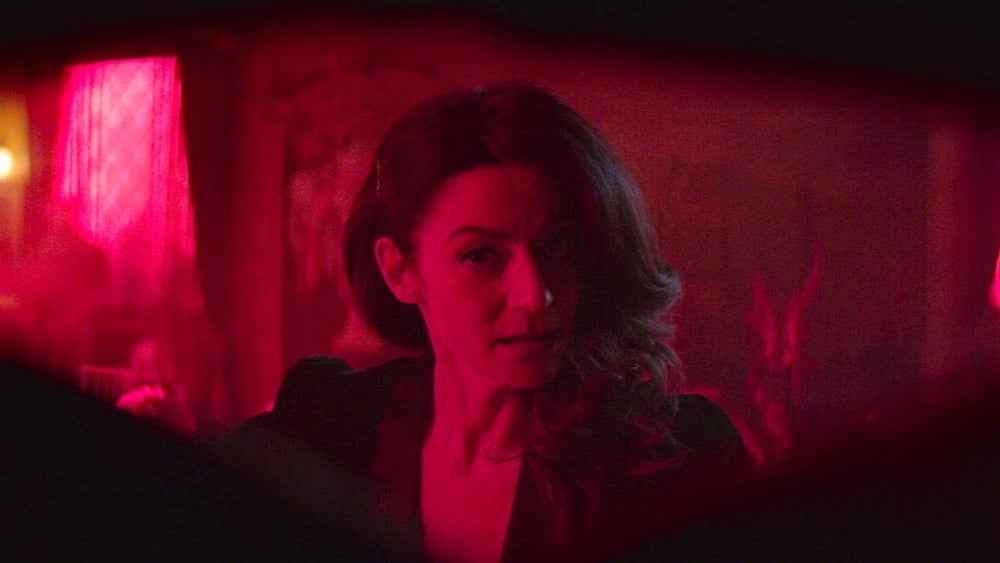 This means the show has an immediate problem in trying to make sure we perceive Zelda and Hilda, in particular, as sympathetic characters… but I enjoyed the tension of this problem. Lip service is paid to the idea Satan doesn’t necessarily equate to “Evil”, and is more an unruly deity that challenges God and arguably offers mankind more freedoms, but things are kept morally cloudy. None of the witches or warlocks run around throwing children into ovens, so it’s more like Sabrina’s a reluctant junior member of a brainwashed cult. Although she’s someone who isn’t afraid to question the cult’s teachings and logic of what her aunts have been institutionalised by; all while enjoying the magical powers her status as a half-breed witch grants her. Casting spells really do come in handy for a girl trying to navigate her way through a supernatural coming-of-age story, and the more traditional concerns of a hormonal teenage girl in high school.

Where CAoS encounters problems is in two main areas. Firstly, Sabrina’s caught between two societies, so we spend a fair amount of time in this show’s version of Hogwarts—the Academy of the Unseen Arts. This seems like a clear attempt to inject some Harry Potterisms into the show, but it never totally works, partly because it’s not much fun at the Academy. This is partly by design because the school is essentially a Satanic Temple (with a very controversial duplicate of a statue of Baphomet), and not the kind of place you want to go and have fun adventures in. That said, one of the better episodes does involve three ‘mean girl’ Weird Sisters as they put Sabrina through a ‘Harrowing’ (a witch’s ‘hazing’), but that was a rare moment when the writers made good use of an “evil Hogwarts” and its customs. 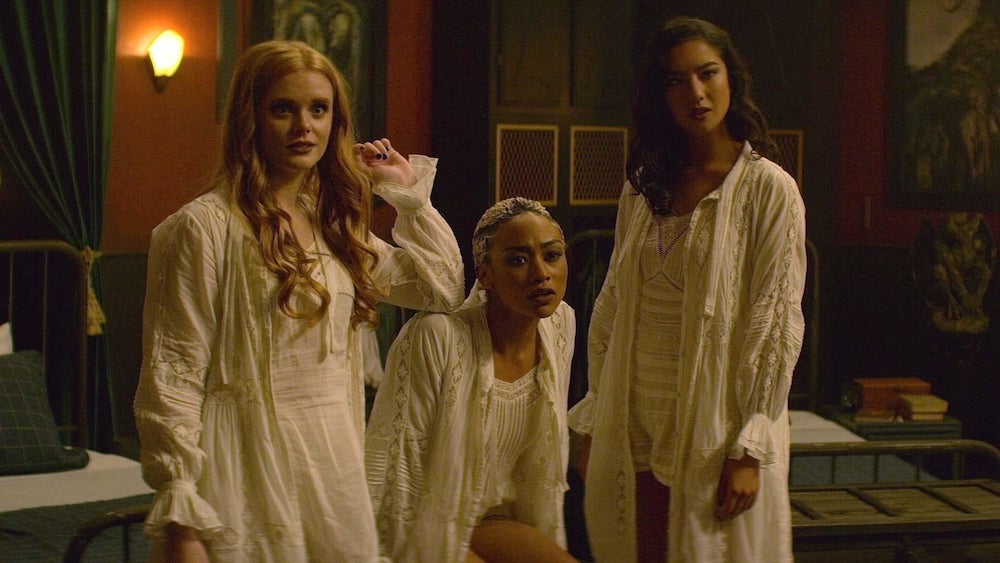 While it’s a wise decision to differentiate the Academy from what J.K Rowling’s ‘Wizarding World’ delivers, that doesn’t fix the problem the show has in making Sabrina’s schooling there seem very interesting. I’d much rather she just attend her normal school all of the time (which is already shot in a similarly hazy and creepy way), but giving witches and warlocks their own bizarre place of education has become as necessary as a flying broomstick post-Harry Potter.

The other issue is that, frankly, the human characters are uninteresting and it’s evident the writers have less time for them. Sabrina has a Scooby Gang of female pals, including one who’s gender-fluid, together with her human boyfriend Harvey, but they’re all forgettable. Towards the end of the first season, we’re suddenly given more episodes that involve Harvey (and his family’s tradition of coal mining and hunting witches) and the others get more involved, but they’re just never as interesting as anything happening with the literally more enchanting side of the cast. That’s perhaps why Sabrina’s best friend Roz (Jaz Sinclair) is given vaguely witch-like powers of her own, in what feels like an effort to make her more appealing and useful during stories that are obviously charged with a supernatural intrigue. It’s like when Buffy the Vampire Slayer decided to turn Willow into a white witch, once Alyson Hannigan’s nerdy bookworm shtick wore thin. 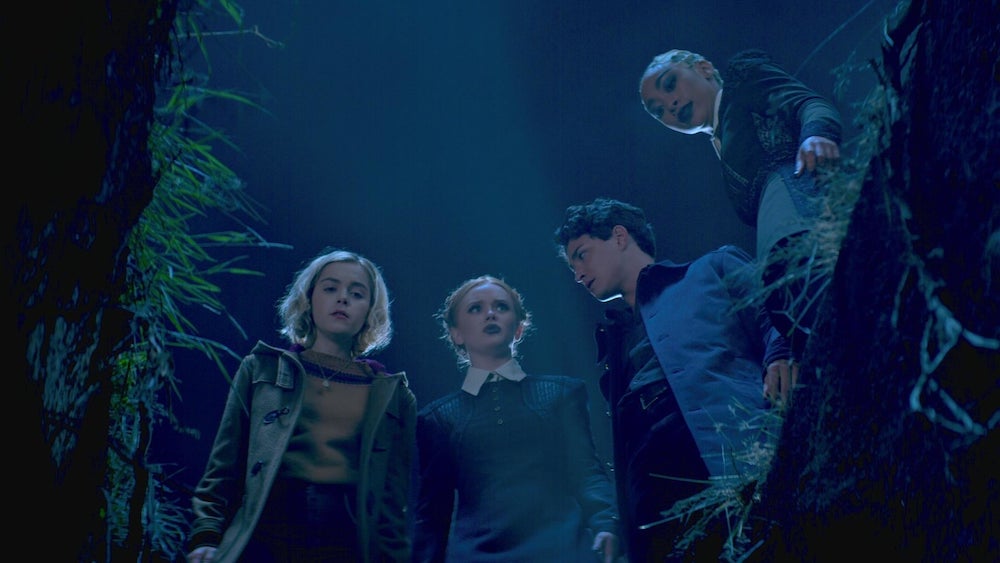 Not every episode’s a winner and it takes maybe five instalments to acclimate to the dissonance of a young heroine whose family are in league with Beelzebub, but thankfully the actors involved are mostly well suited to their roles. It was an undoubted masterstroke to cast Kiernan Shipka (best-known as little Sally Draper in Mad Men) because she has “old-fashioned” features that evoke Sabrina’s roots as a 1960s character, while also being modern and feminist in a way that doesn’t rub against that. Sabrina can be a little too accomplished and smart at times, meaning it feels like nothing much can get the better of her, but I was satisfied with what Shipka brought to the table.

Playing her aunts, Miranda Otto and Lucy Davis provide the support and foundation for Sabrina’s character, and they’re an enjoyable mismatch as sisters: Zelda’s being stoic, authoritarian, and forever trying to keep her niece on a dark path; whereas Hilda’s sweeter and cheerier, being more of an affable English mum who understands Sabrina’s concerns and doubts. They’re aided by the unexpected delight of newcomer Chance Perdomo, playing Sabrina’s cousin Ambrose with a cheeky twinkle in his eye. Being closer to Sabrina’s age, he also provides a more relatable link to her magical heritage, and they share a bond that’s often more like brother and sister. Unfortunately, Ambrose’s importance to the narrative does start to drift and an attempt to develop a romantic relationship for him falters—enough so his boyfriend’s declaration of love in the finale totally failed to move me. 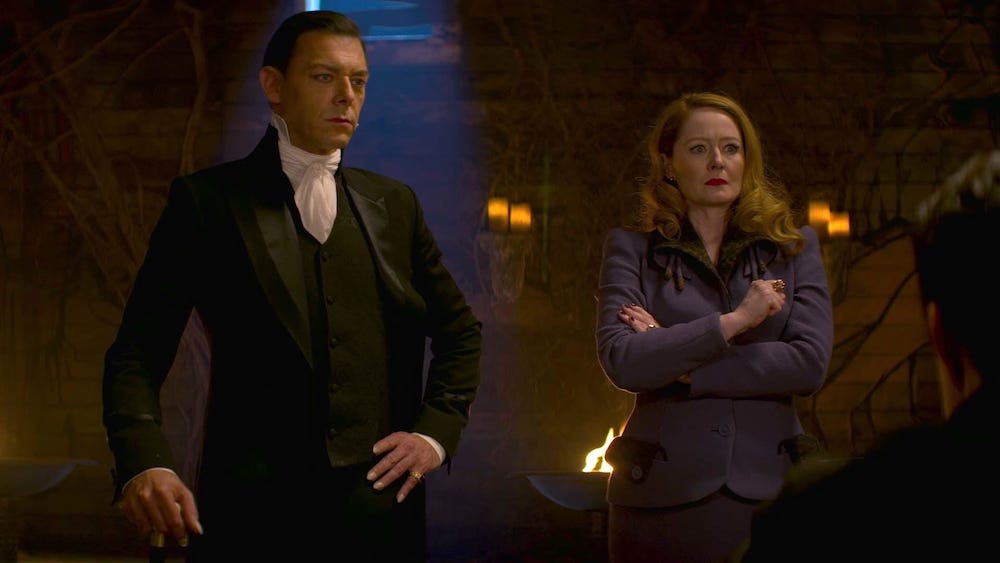 Of the many recurring characters, Michelle Gomez gets to play another fiendish woman (not too far removed from Missy on Doctor Who), although here the show’s more adult tone allows for a more genuinely unsettling performance with real bite. Rather like Shipka, Gomez is perfect casting as a “devil woman”, and the only frustration is that Miss Wardwell becomes possessed by an entity from Hell much too soon. We miss a chance to get to know and love Miss Wardwell before she becomes a manipulative demon, so the change doesn’t leave an impact. We also lose any sense of Sabrina unwittingly having lost a strong relationship with an authority figure she’s not related to, as from our perspective Wardwell is pulling strings from the shadows almost immediately.

The writers perhaps realised they’d played a hand too early, as the latter half of the season shifts Wardwell into a slightly more ambiguous area. She’s sometimes helping Sabrina, in a way that seems to be genuine… well, until her mask literally slips in the finale.

Richard Coyle has the most thankless role on CAoS, as his Father Blackwood is a cliched stiff and English warlock who runs the Academy with an iron fist and is unwavering in his devotion to the Dark Lord. Coyle plays this fairly two-dimensional role well, however, and for those who still remember him as man-child Geoff in BBC sitcom Coupling (where he co-starred alongside Jack Davenport, Michelle Gomez’s husband) his grave solemnity may surprise some. 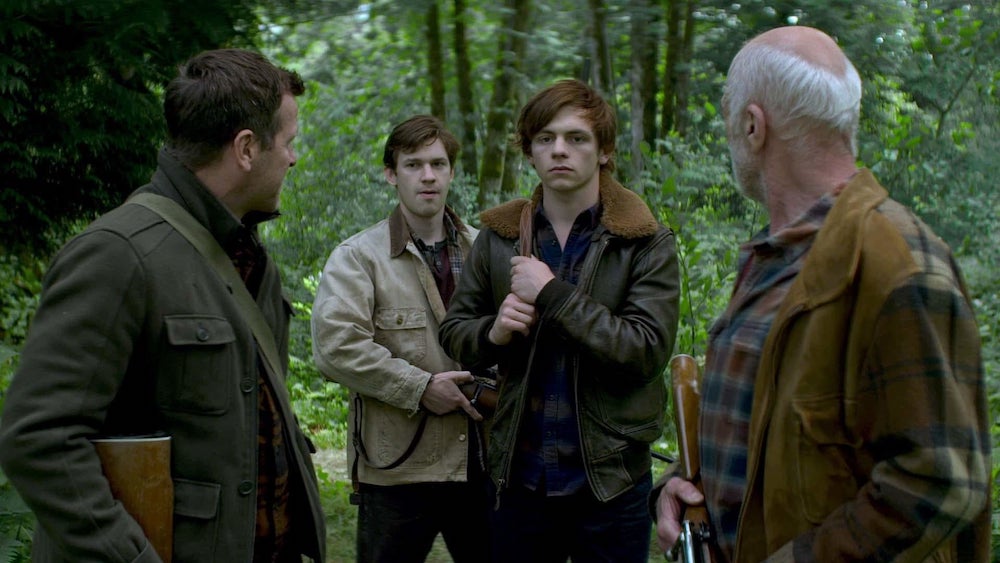 As a piece of filmmaking, CAoS has its ups and downs. Lee Toland Krieger (The Age of Adaline) sets the standard as director of the first two episodes, having worked on Riverdale, and he does a commendable job of giving the show its own murky look. The show oozes a Halloween tone (which it was released to coincide with), with lots of autumnal colours and a tendency to compose shots where the edges of the frame are out of focus. That helps give the show a woozy, dream-like quality that works nicely. My only complaint is that things are often so dark that details are lost in a perpetual gloom and intentional blurriness, perhaps not helped with the show being delivered in a compressed data stream. HDR helps with contrast and colour, but despite being shot using RED® DRAGON 6K cameras with a 4K Digital Intermediate the show isn’t being shown in 4K by Netflix. I don’t know why this seems to happen with some of their shows (cutting costs somehow?), but also doubt the added resolution would have fixed everything.

Overall, Chilling Adventures of Sabrina achieved most of its aims in this first season, which got progressively better in the middle before levelling out for the homestretch. The non-magical characters need more work, Sabrina needs to be less powerful and capable (or just encounter bigger threats), the Academy of the Unseen Arts needs to develop more of its own identity if we’re going to continue the oddness of Sabrina’s dual-education (how does she have the time to be schooled twice each day?), and there were some narrative bumps along the way… but it’s nothing a second season can’t fix if the writers make good choices about how to proceed.