Having been responsible for so many of pop culture’s most enduring images and moments, Steven Spielberg is the perfect filmmaker to adapt Ernest Cline’s 2011 novel Ready Player One. The story is effectively a high-tech spin on Charlie and the Chocolate Factory, switching Willy Wonka’s workshop for virtual reality platform ‘the OASIS’. This VR environment is the co-creation of James Halliday (Mark Rylance), a tech genius whose brainchild become society’s means of escape in the near-future of 2045. Cities like Columbus, Ohio, now contain slum districts known as ‘Stacks’ where people live in vertical trailer towers, entertained and distracted from their claustrophobic reality by the endless possibilities of what the OASIS can deliver — virtually.

After Halliday’s tragic death, a power struggle emerges after it’s revealed he’s literally left the keys to his kingdom inside the game. Three keys are hidden deep inside the OASIS, enabling access to an Easter Egg that’ll grant the finder ownership of the platform. Understandably, millions of players have been inspired to scour the OASIS to find the prize, including Wade Watts (Tye Sheridan), an 18-year-old Columbus native who spends hours in the OASIS as his avatar Parzival. He’s joined in his search by fellow “High Five” clan members Samantha/Art3mis (Olivia Cooke), Helen/Aech (Lena Waithe), Akihide Karatsu/Sho (Philip Zhao), and Toshiro Yoshiaki/Daito (Win Morisaki). 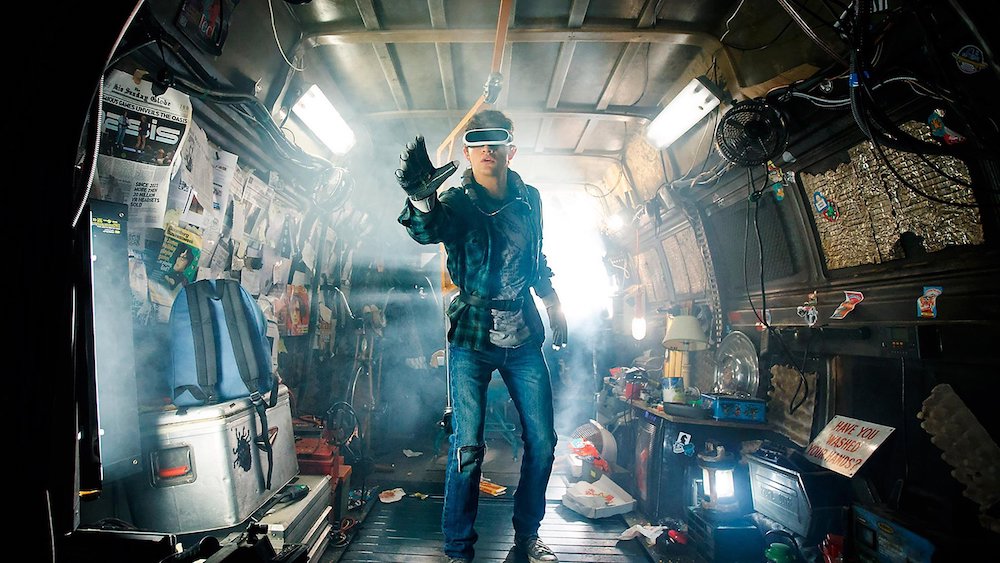 Unfortunately, less scrupulous users are also interested in completing Halliday’s quest for the ultimate prize, such as the CEO of Innovative Online Industries (IOI), Nolan Sorrento (Ben Mendelsohn), who intends to monetise the OASIS once it’s under his control.

Ready Player One may be set in the future, but there are clear parallels to today’s internet and how big corporations want to control it. Today, the US is embroiled in a legal battle to maintain “net neutrality”, which threatens to spill out into the wider world and potentially undo the level playing field everyone’s come to expect when accessing the web. Many of the visuals in Spielberg’s movie are also extrapolations of various console games, making a huge chunk of Ready Player One resemble a Playstation 4 ‘cut scene’. The VR aspects of the concept are definitely there, however, with people running on 360-degree conveyor belts, sometimes suspended from wires, wearing haptic bodysuits, and the now-familiar VR headsets that have recently become available to consumers.

There’s a wise simplicity to Ready Player One’s storyline, which always makes sense when you’re dropped into a visually complicated world. It allows viewers to easily grasp what’s going on, and why, so a large part of their minds can focus on the action sequence choreography and the abundance of characters and pop culture cameos.

Given Spielberg’s high stature in Hollywood, there’s arguably no other director who could have called in enough favours to access all the intellectual properties crammed into Ready Player One. You’re likely already aware Back to the Future’s DeLorean is involved, or that King Kong is seen swinging through New York, a supersized T-Rex from Jurassic Park (1993) chews on traffic, and the Iron Giant has a key role during a climactic battle, but there are many other blink-and-miss cameos from iconic characters. Far too many to mention here, or even notice first time around, in a movie destined to be freeze-framed to death on home video later this year.

The good news is this fan-servicing isn’t overindulgent; it’s just background fun, with selected characters and vehicles brought to the fore without it being too distracting, and the occasional big surprise along the way. Most notably, the search for the second key takes the “High Five” gang into a very famous movie location, that will delight horror fans…

What could have become a tiresome exercise in spotting famous faces is avoided by Spielberg, a master storyteller, who knows to keep things focused on the original characters and their goals. Tye Sheridan and Olivia Cooke are particularly engaging and winsome as the leading duo, and their desire to find the Easter Egg before Ben Mendelsohn’s villain does the same and corrupts their leisure space, is very easy to get behind. There are some fairly obvious themes about teenagers discovering “reality” is better than a virtual playground, because reality’s real, yo, but it’s a lesson that needs to be shouted from the rooftops. Too many people already spend too much time online, avoiding their problems in real life, so heaven knows what will happen once VR is almost indistinguishable from a real experience.

I’m not sure how much Steven Spielberg, a man now in his seventies, really enjoys gaming or virtual reality, but he’s always been at the cutting-edge of movie technology. He almost singlehandedly began the age of digital effects with Jurassic Park, and got involved with motion capture and 3D with The Adventures of Tintin (2011), but has recently stuck to worthier dramas like War Horse (2011), Lincoln (2012), Bridge of Spies (2015), and The Post (2017). Tintin wasn’t the expected franchise-launching hit, while The BFG (2016) was an unexpected flop, so there was reason to believe Spielberg’s Midas Touch with blockbusters had finally deserted him. Those inspired by his classic work for Amblin Entertainment had accepted the torch (i.e. J.J Abrams), while new studios like Marvel had perfected the popcorn movie Spielberg became known for in the 1980s. But Ready Player One proves he can still eclipse filmmakers less than half his age. It’s this year’s Mad Max: Fury Road (2015) in that respect.

Ready Player One is a dazzling experience, but what works best is Spielberg’s masterful eye ensuring nothing suffers from visual overload or a lack of spatial clarity. He also keeps the human characters and their hopes and dreams at the forefront of events, so the movie retains the heart you know other filmmaker’s would have lost amidst the sheer spectacle of it all.

There are missed opportunities and areas that could have been better realised, of course, as it’s such a difficult balancing act to sustain. One never get enough of a feeling the real world’s a terrible place (bad enough for everyone to take refuge in VR), or how society functions if so many people spend their days wearing headsets bringing their imaginations to life. Maybe the truth of Ready Player One’s reality was just too dark for Spielberg to tackle honestly, and it clearly wasn’t the focus of the story being told here, but I wanted slightly more clarity on how the real world operated. The character development is also a little shallower than I was expecting, without many surprises in how things ultimately pan out, but a lot is forgiven because the pacing is excellent and the visuals are a heady source of joy. It also has consistently good production values, with every penny of its $175 million budget up on screen, without any rough areas due to budget or time constraints.

Ready Player One will work for general audiences, particularly because “online gaming” isn’t as niche as it once was, and geek culture’s taken over mainstream entertainment, but it’s still probably going to appeal more to the under-30s — although there are plenty of references and homages to things only the under-50s will smile at. Being somewhere in the middle, I thought Ready Player One was a visual treat with solid structure and fun ideas, only let down by some broad strokes with the characters and the “real world” complexities.