“To me, this endless blacktop is my sweet eternity. I knew I was going to hell in a breadbasket.” With these words, we’re introduced to Vance (Willem Dafoe), a soft-spoken loner with a motorcycle and a lot of misanthropy in Kathryn Bigelow’s debut film, The Loveless (1981). Bigelow and co-director Monty Montgomery aimed to do for biker films what Terence Malick’s Badlands (1973) did for Bonnie and Clyde—searching for meaning in the gaps between the action.

Like that Malick classic, The Loveless is molasses slow, punctuated by long stretches of silence, and overflowing with beauty and precise period detail. Dafoe, in his cinematic debut as Vance, lurches through the film as if through a dream, bathed in neon with a cigarette always dangling from his mouth. If the film surrounding him is more than a little slight, it’s no less a staggering and deeply assured first impression. With their debut, Bigelow and Montgomery crafted an elliptical mood piece that’s frustratingly incomplete but rich in style; a movie about the 1950s that couldn’t have been made in any decade but the 1980s.

In a modern spin on biker classic The Wild One (1951), the film traces the destructive aftermath of Vance and his biker gang stopping by a small southern town to tune up their hogs on the way to Daytona. Their presence shakes the sleepy town awake, and tensions begin to rise between the gang and its townspeople. When Vance hops into the cherry red convertible of Telena (Marin Kanter), the two quickly fall in love against the best wishes of her violent, abusive father Tarver (J. Don Ferguson). Previously unspoken hostilities towards the bikers quickly bubble to the surface and escalating into an explosive showdown.

Kathryn Bigelow’s filmmaking style didn’t quite come together until a few years later in her supremely underrated vampire movie Near Dark (1988), and her work here is unlike any other film she’s made. It’s minimalist to a fault; at its core, there are only three or four scenes in which the plot even progresses. Everything in between is simply in service of atmosphere—whether that be shots of Dafoe brooding in sunglasses, or scenes of the bikers playing chicken with switchblades. If that sounds exhausting or dull, that’s often because it is. It’s bold and confident, no question, but also unfocused. There’s an enticing dreaminess that carries the story forward from one scene to the next, but its mastery of mood and atmosphere isn’t enough to make it completely engaging the whole time.

Bigelow began her career as a video artist, and that background is apparent in the way The Loveless forgoes narrative in favour of reconfiguring and recontextualising genre tropes. This manipulation of expectations is something she’d make more accessible as her career continued, but never in quite so experimental a way as she does here. This is a ‘50s biker film stripped down to its most base elements: fast cars, sharp knives, and homoeroticism—something Bigelow always seem fascinated with. Call it a companion piece to Kenneth Anger’s more explicitly avant-garde Scorpio Rising (1963), another film that calls attention to the same fetishism and eroticism in biker films that Bigelow does. While Bigelow’s commentary is much less substantial than Anger’s, the glamour and flashiness in their depiction of biker culture are mutual.

At a brisk 88-minutes, The Loveless is fortunately short enough not to overstay its welcome. In spite of the occasional boredom, there are occasional flashes of brilliance that foreshadow the artistry of Bigelow’s Hollywood career. One later scene rapidly oscillates between chaotic shots of the bikers brawling and screaming in a bar and silent shots of Telena backing out through a thick blue fog. Many scenes, like this one, feel almost like they belong in a better film. Despite the film’s slightness, Bigelow is already a director in full control of her artistic vision. The Loveless has a singular look and feel, which Bigelow is in firm control of during every meticulously composed frame.

It doesn’t hurt that she and Monty Montgomery happened to discover an absolutely unreal talent in young Willem Dafoe. In keeping with the Ryan-Gosling-in-Drive school of acting, Dafoe doesn’t really emote beyond sneers and frowns, yet his presence is magnetic. At times the camera just lingers on a close-up of him for an entire minute, mining his rugged, angular face for meaning. His charisma and the power of his sparse line deliveries is what carries the film and makes it watchable during the slower passages.

Bigelow and Montgomery don’t succeed in everything they set out to do—in spite of Dafoe’s performance and its coolly stylish visuals, it often feels more like a half-remembered dream of a great film than an actual great film—but as a harbinger of what was to come for both Dafoe and Bigelow, the film is a worthwhile early document of its artists’ singular vision. 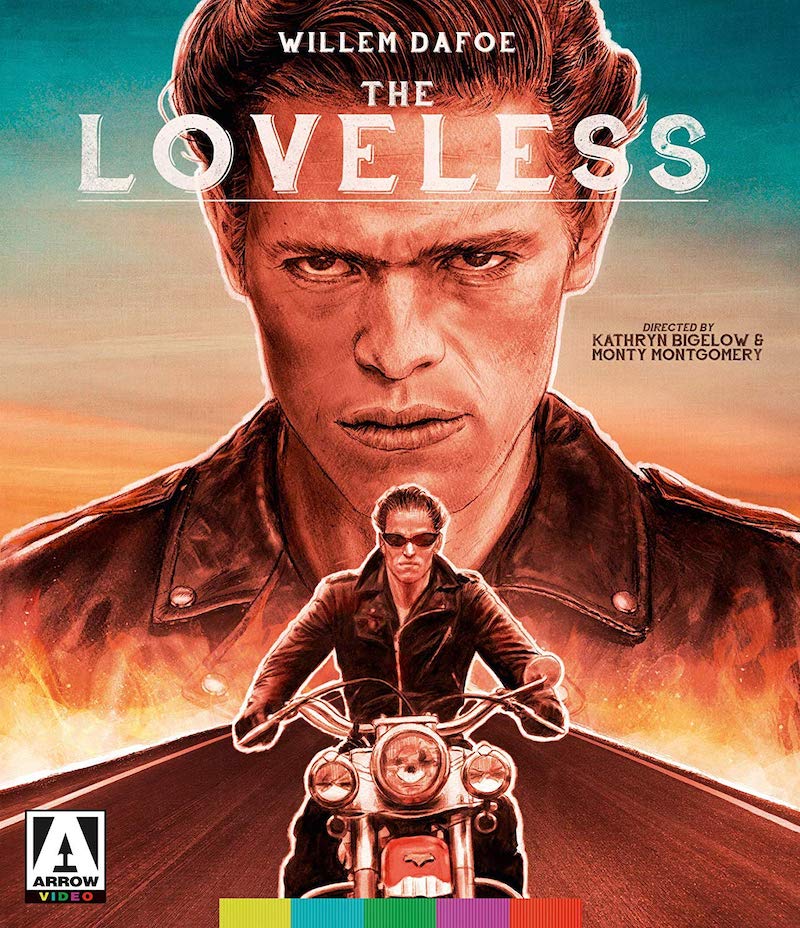