If you’ve had your fill of 1980s nostalgia with Stranger Things and It (2017), take a step forward into the not-so-distant past: the 1990s. Instead of teenage kids tearing through the neighbourhood on bikes to the sound of synth pop, Mid90s gives us teenagers on skateboards propelled by hip-hop and hormones.

Bradley Cooper reminded us with A Star is Born (2018) that actors can make the transition to the director’s chair. Jonah Hill (Maniac) shook off his association with Judd Apatow comedies like The-40-Year-Old Virgin (2005) to prove he’s he a great actor, earning Academy Award nominations for Moneyball (2011) and The Wolf of Wall Street (2013). But did the experience of working with Martin Scorsese (Taxi Driver) and Bennet Miller (Foxcatcher), helps Hill mastermind a hit with Mid90s?

Stevie (Sunny Suljic) is a shy 13-year-old living in Los Angeles, contending with his abusive older brother Ian (Lucas Hedges) and an almost-absent single mother (Katherine Waterson). Facing a summer with nothing to do, Stevie finds a new family amongst a group of teens that hang out at a nearby skate shop. The gang consists of long-haired shop owner “F*cksh*t” (Olan Prenatt); aspiring filmmaker “Fourth Grade” (Ryder McLaughlin); the youngest of the bunch, Ruben (Gio Galicia); and leader of the group Ray (Na-Kel Smith). Accepting him into their clique, Stevie slowly comes out of his shell as they take him under their wing. After some tough life lessons, Ray slowly becomes Stevie’s mentor whilst directing him down a less self-destructive path. 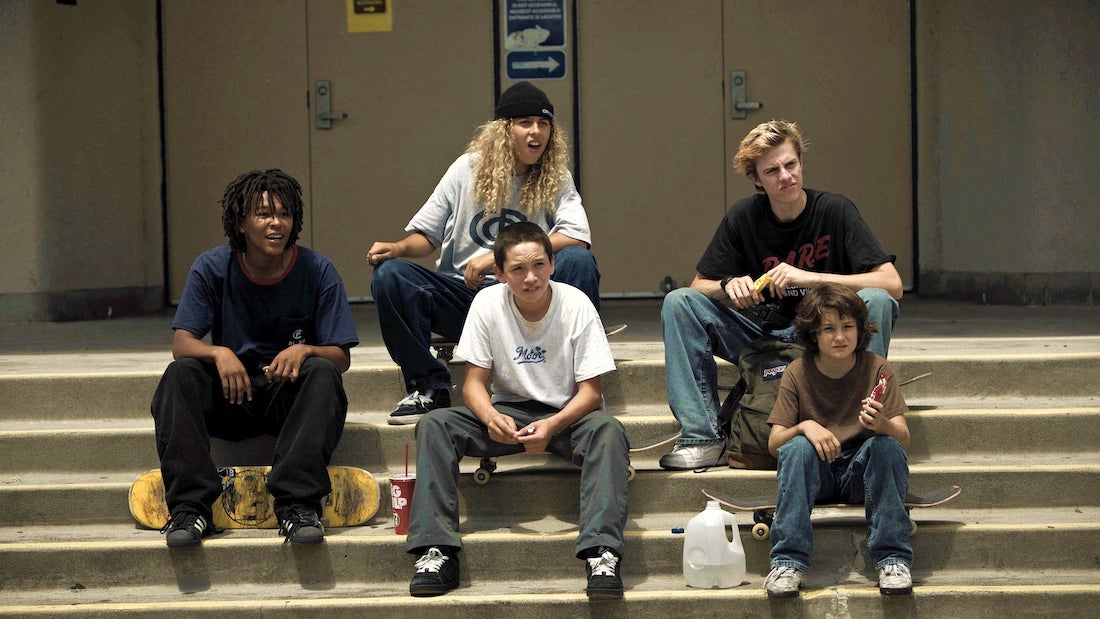 Hill has nurtured this young and talented cast into giving nothing but believable roles. Aged just 11 during filming, Suljic (The Killing of a Scared Deer) carries the entire movie’s weight on his shoulders and is outstanding as Stevie. He balances his character’s raging hormones perfectly, as Stevie sometimes behaves disrespectfully but always shows his vulnerability about just wanting to fit in. He’s so small and fragile that every knock he takes makes you feel his pain in the pit of your stomach. Stevie’s naive and wide-eyed optimism is infectious and Suljic gives a heart-wrenching performance that proves what a talented child star he is.

Worlds apart from his delicate performance in Manchester by the Sea (2016), Lucas Hedges also proves he’s becoming the most impressive actor of his generation. He buries himself in the role of Ian, Stevie’s older brother, riddled with angst. Constantly beating on his younger sibling, Hedges plays the scowling hip-hop headcase with such menace he could easily be mistaken for Eminem’s twin brother. Unfortunately, Katherine Waterston (Alien: Covenant) is severely underwritten and drops in and out of the story. It’s incredibly frustrating that her performance fails to tap into the promise she showed in Inherent Vice (2014). 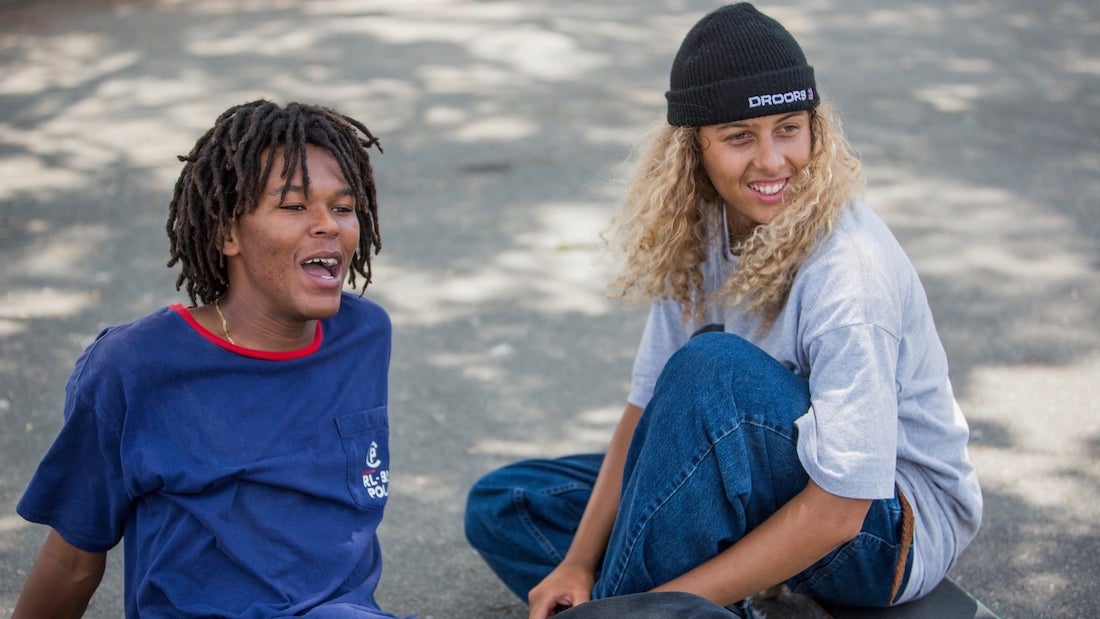 Mid90s’ best moments are when Stevie and his friends are just hanging out, being dopey kids having stupid conversations and laughing themselves silly. Like Bing Liu’s documentary Minding the Gap (2018) you instantly relate to these characters. To some, it’s a peek into a world when the internet wasn’t in your pocket; to others, these are vivid memories of being young in that era—spending summers causing mischief but staying out of serious trouble.

Hill’s stated in several interviews that he wanted Stevie’s friends to have the authentic feel of a teenage gang. Although one would never know it, the main characters are played non-professional actors hired primarily for their skating abilities. There’s a realistic naturalness to their interactions and movements whilst skating down a street alongside heavy traffic. Each of their performance has a source of honesty that shines through their conversations and actions.

Mid90s’ naturalistic style was influenced by many coming of age movies and it’s nothing we haven’t seen before. There are noticeable elements of Larry Clark’s Kids (1995), as both revolve around under-parented teenagers and the gritty exploration of teen lifestyle during the ’90s. However, Mid90s’ tone is much lighter. With Hill’s natural ability to infuse his comedic personality into the script, the dialogue sometimes evokes Richard Linklater’s Dazed and Confused (1993) for good measure. The script has attracted plenty of attention due to its offensive language, with the use of the words “faggot” and “retarded” being used predominantly. However, it achieves a sense of authenticity as kids of that generation genuinely did speak like that as a try-hard way to look cool amongst their peers. Although it may not be autobiographical, I do believe Mid90s assembles everything that made Hill the man he is today.

Taking the influence he’s gained from directors he’s worked with, Hill loves to linger on visual and audible artefacts of the past to place one directly in the setting. The mise-en-scene in Mid90s is definitely of the period and nostalgia radiates off the screen immediately. Seeing racks of VHS and cassette tapes, Ren & Stimpy T-shirts, and Teenage Mutant Ninja Turtle bedcovers may be a cheap trick, but Hill uses these props perfectly. Technically speaking, the entire production is shot on 16mm film. The tighter shots, smaller frame, and film grain bring an authenticity that you’re watching something on TV or videotape. Director of photography Christopher Blauvelt (The Bling Ring) has given the production a gritty look, creating a middle ground between an A24-produced modern indie and a rough-around-the-edges ’90s skate video. 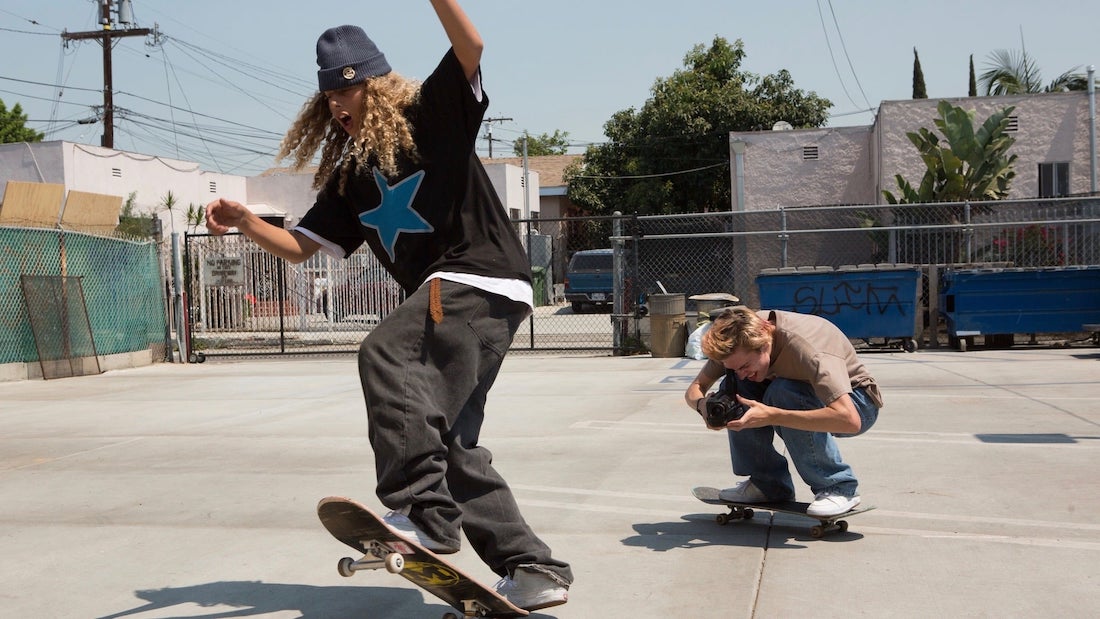 Anyone who grew up in the 1990s and was involved in the skater scene will understand the relieving feeling one gets when seeing the carefree demeanour of a skater in their natural element. Or when you walk into a skate shop and instantly bond with strangers due to your shared love of the sport. It taught you to accept others even if their opinions, ideas and aspirations differed from yours. Skating on your board was a form of escapism from your worries and, to a certain extent, a way to survive the mundane hardships of life. Hill deeply portrays this through the context of the narrative. It’s something the characters need to keep going, and Ray even admits it took him out of a dark place. Hill does a brilliant job at depicting how our hobbies keep us sane and how friendships build us up, yet can also break us down.

Sticking to the era, Mid90s has a great soundtrack. Mainly compiled of ’90s hip-hop, it’s also accompanied with classics from Pixies, Nirvana, and The Cure that ring true as to what it was like growing up back then. The original score is crafted perfectly from the lead singers of ’90s rock band Nine Inch Nails, Trent Reznor and Atticus Ross. The duo previously collaborated on The Social Network (2010) and The Girl with the Dragon Tattoo (2011) and continue to prove why they’re now an Oscar-winning partnership. Like nothing they’ve done before, the score is wonderfully diverse. The wistful keyboard-driven theme delightfully detours into other styles. It’s very different from their previous work with director David Fincher; it’s fun, haunting, and moving in equal measures, setting up the melancholic tone for the movie perfectly.

Mid90s boasts endearing performances, a solid soundtrack, and smooth direction by Hill. It’s a complete opposite to the all-female Skate Kitchen (2018), being a complicated examination of the male psyche. It illustrates youth finding their own identity and the drive to belong, even if it does lead to questionable actions. Nothing in Mid90s is particularly groundbreaking and the ending comes very abruptly, but it’s a delightful coming of age film and an entertaining 85-minutes. As a first time filmmaker, Hill has created something that feels very personal and natural. Mid90s is a nostalgia pill that’s easy to swallow and will make any skate fan want to pick up their board and relive their youth.