Swedish author Stieg Larsson didn’t live to see the success of his trilogy of novels about unorthodox feminist hacker Lisbeth Salander, as they were published between 2005–07, a year after he died of a heart attack. Then his native country produced three film adaptations, which introduced Noomi Rapace and Danish director Niels Arden Oplev (Mr Robot) to foreign audiences, which further elevated the status of Larsson’s stories.

2009’s ‘Millennium Trilogy’ of The Girl with the Dragon Tattoo, The Girl Who Played with Fire, and The Girl Who Kicked the Hornets’ Nest, was so successful that David Fincher (Se7en) remade Dragon Tattoo in 2011 with Rooney Mara (The Social Network) as Lisbeth and Daniel Craig (Spectre) as her accomplice, but despite turning a profit with $232M the two back-to-back sequels Fincher planned never came about. By 2015, Sony Pictures started to seriously consider a “soft reboot”, which came to pass with 2018’s release of The Girl in the Spider’s Web—a prequel story for Lisbeth Salander based on author David Lagercrantz’s novel, who has continued Larsson’s planned ten-book series with its fourth and fifth instalments. 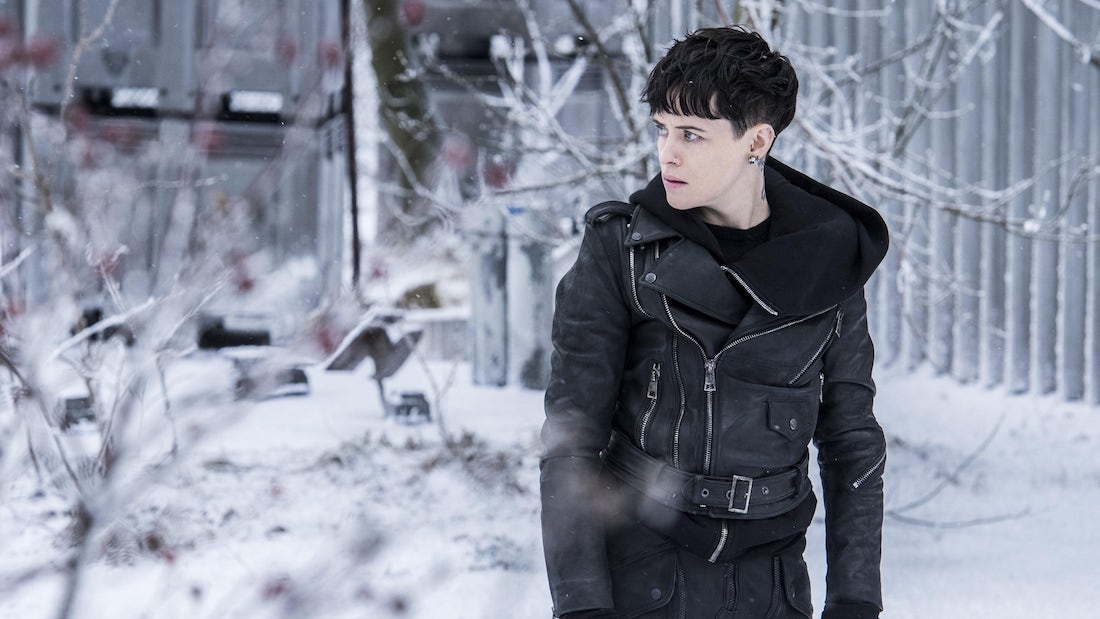 It’s quite a knotted production history, but Sony clearly smells potential for success with the Lisbeth Salander character, who arguably grows more relevant as technology continues to augment our daily lives and the #MeToo movement has put an uncomfortable spotlight on how some men abuse their power at the expense of women. Sadly, this prequel fell short of even making back its $43M budget, with a $35M gross at the worldwide box office, putting into doubt any hope of further adaptations. Or at least ones released theatrically, as people forget the Swedish ‘Millennium’ trilogy garnered more success once it was recut into a six-part miniseries for television.

The Girl in the Spider’s Web finds Lisbeth (Claire Foy) still living in Stockholm, Sweden, using her incredible computer skills and vigilantism to rescue and avenge abused women. The adventure begins when Lisbeth is hired by Frans Balder (Stephen Merchant), a former NSA employee, to find and destroy a dangerous program called Firefall that can access the world’s nuclear codes. However, once Lisbeth gets hold of Firefall, it sets determined NSA agent Edwin Needham (Lakeith Stanfield) on her tail, the MacGuffin program is later stolen by mercenaries with bad intentions, and a misunderstanding leads Balder to set the authorities on Lisbeth. Interwoven throughout the story are flashbacks to Lisbeth’s childhood with her sister, particularly a pivotal moment when she decides to run away and essentially abandons her sibling to the sexual abuse of their father. 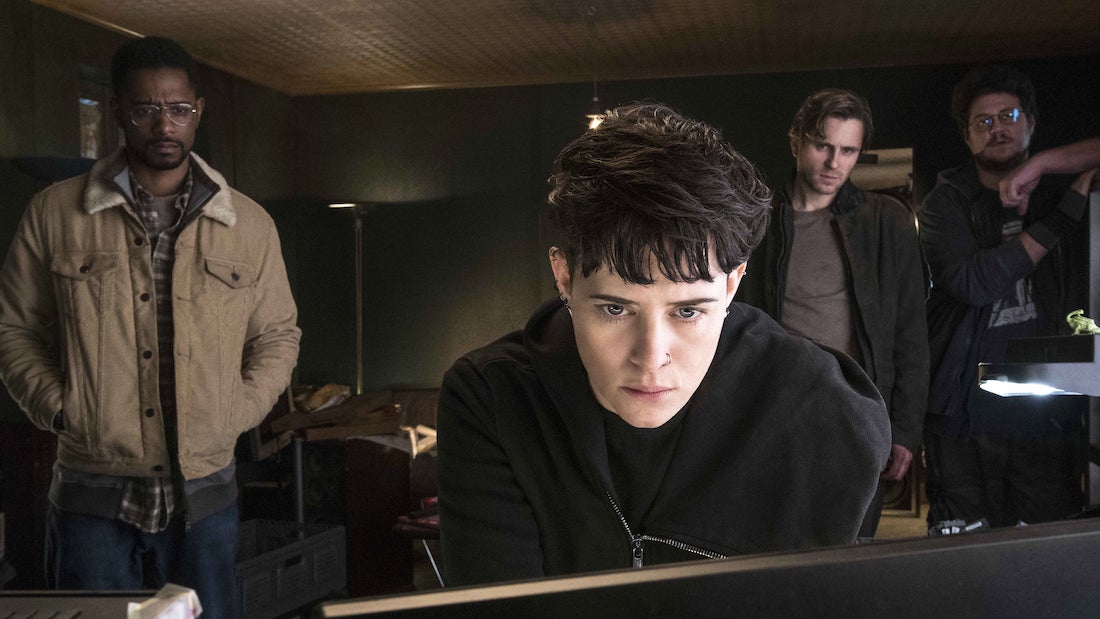 The very talented Fede Álvarez (Don’t Breathe) is behind the camera for this new film, and which he’s a step down from Fincher he does a great job making Spider’s Web appear cut from the same cloth, despite being made for about half as much money. It does have a slight whiff of being cheaper and carries more of a direct-to-video vibe but, in some ways, that’s to its benefit because the material is often quite scuzzy and it feels like the sort of movie you’d have discovered on VHS a few decades ago. There are several moments that left an impression on me; a motorcycle escape across cracking ice, a sequence with a sniper using a high-tech gizmo that means shots can be fired through brick walls at a great distance, and a standout moment when Lisbeth is incapacitated with a tranquillizer and counteracts its effect by snorting amphetamines and continuing her chase. I don’t recall as many exciting or creative things happening in Fincher’s film, but Spider’s Web does keep the weird and sadist elements audiences expect from Lisbeth stories: torturing someone inside a vac-packed body bag, and startling use of VFX when someone reveals a disguised facial injury.

Claire Foy seems like an odd choice to step into the shoes of both Rapace and Noomi, who both had similarly gaunt and pale appearances. Foy isn’t made to look quite so “alien”, but retains aspects of the character’s iconic appearance like her famous dragon back tattoo, piercings, tight leather clothes, and that terrible boyish haircut. More importantly, Foy’s capable and physically believable during the stunts, and yet you’re never convinced she’s going to make it out alive—perhaps because she’s so skinny and petite. Lisbeth’s self-sufficient and highly trained, but she’s human and rarely gets into situations as the undoubted winner. It’s her inner strength, determination, planning, and quick-thinking that often ensures her safety. Foy truly shows her range here, as this is a world away from the characters she’s known for playing. 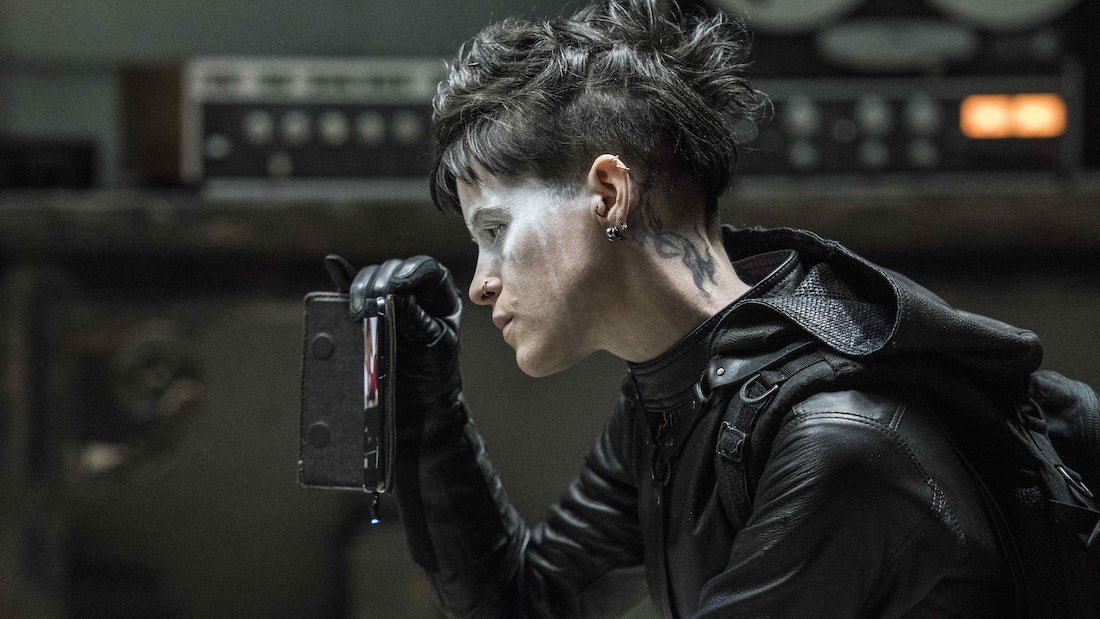 Interestingly, this is a prequel story that delves into Lisbeth’s own family history, while also being an apparent sequel to Dragon Tattoo in the sense her relationship with sympathetic journalist Mikael Blomkvist (Sverrir Gudnason) seems to be continuing from Fincher’s movie. This is probably why it’s best to call it a “soft reboot”, as it’s a sequel that has chosen to reimagined Lisbeth as someone younger and more likeable. But considering Craig’s version of Blomkvist was such a key part of Dragon Tattoo, Gudnason gets comparatively little to do here. Spider’s Web is definitely playing up the rising star power of Foy, fresh from Netflix’s The Crown, without “James Bond” on the roll call.

The Girl in the Spider’s Web received mixed reviews and wasn’t a hit, but it’s a decent follow-up and an entertaining action thriller, even if you have no existing attachment to the characters. You can easily start with this one, perhaps by design, and it benefits from an eclectic cast that includes the wonderful Sylvia Hoeks (Blade Runner 2049) as Camilla, Lisbeth’s blonde sister, who’s very much a mirror image of Lisbeth that reveals who she might have become under different circumstances. The story is by-the-numbers for a thriller and not as complex as Dragon Tattoo, but it has a look and a feel that keeps your interest. There’s always a surprisingly good set-piece or unsettling shock or physical torment to make you sit up and take notice. It’s just a shame we likely won’t get more, as audiences outside of Sweden don’t seem to have embraced Lisbeth Salander in the same way. 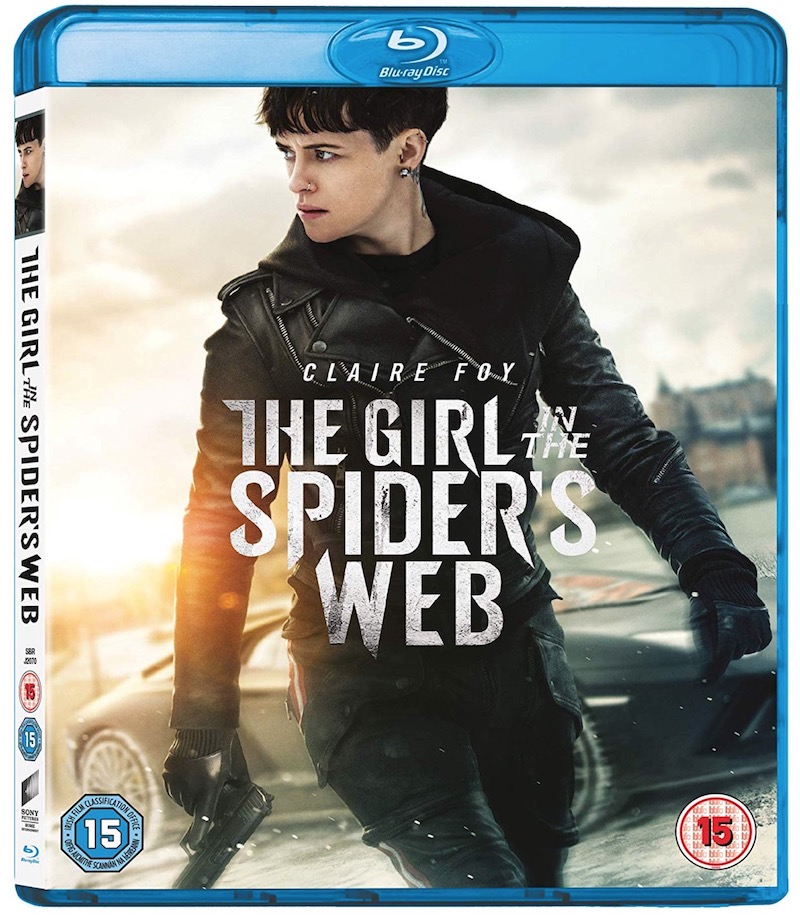 A dark and bleak movie, the 1080p Blu-ray does a sterling job retaining all the depth and detail of the image, so the darkness and blue-grey exteriors are always interesting to look at. It’s a very accurate rendering of the image with wonderful skin tones and definition on items of clothing and the environments. The black levels are also well-balanced, leading to a quality of image presentation that’s hard to beat.

The DTS-HD Master Audio 5.1 soundtrack is very good, evoking the atmosphere of every location superbly. A sequence in a busy airport was particularly good, anchoring you in that environment thanks to the mix of sound effects happening all around. The sounds of a sniper towards the end also sell that scene magnificently, while the music by Roque Baños is balanced nicely with great fidelity. Clear dialogue and meaty bass whenever necessary.