I’m not sure exactly where to begin with Inherent Vice—I’ve seen it twice now, and I haven’t completely wrapped my head around it, but I know it’s a movie I’ll be returning to for the rest of my life. It’s not a problem of not understanding the plot, as the mystery at the centre of Inherent Vice, while deliberately convoluted and elusive, isn’t nearly as impenetrable as many of the reviews have made it out to be. It’s that, beyond all of the missing real estate tycoons, Nazi bikers, Mansonoid conspiracies and coked-up dentists, at the heart of the movie is a pervasive undercurrent of melancholy that ties together its parade of sight gags and stoner humour and familiar faces popping up for brief, weird vignettes. It’s a feeling captured perfectly by the song that plays over the end credits (and if you consider an end credits soundtrack cue a spoiler, consider yourself warned). I think I’ve listened to Chuck Jackson’s version of “Any Day Now” every day since seeing the film—I was startled to hear it as the movie cut to black, but it’s as perfect a coda for Paul Thomas Anderson’s adaptation of Thomas Pynchon’s book as it is unexpected.

The song serves as a requiem both for a lost love and for a brief, perfect moment that, as the movie begins, is already almost over, with the idealism of peace and love giving way to the inexorable march of time and “the ancient forces of greed and fear,” as they’re called by the movie’s narrator, the possibly ethereal, probably immortal flower child Sortilege (Joanna Newsom). Those forces are represented by the Golden Fang, the mysterious crime ring with a seemingly limitless reach that, as the movie begins, has apparently kidnapped real estate developer Mickey Wolfmann (Eric Roberts). The movie opens with mutton-chopped private eye Doc Sportello (Joaquin Phoenix) being paid an unexpected visit from his ex-old lady and Mickey’s current lover, Shasta Fay Hepworth (Katharine Waterston), who asks Doc for help. Watching the movie a second time, this entire scene took on a different meaning—it’s clear that Doc, who is rendered defenceless by Shasta’s “heavy combination of face ingredients,” is being played, and throughout the movie, our well-meaning but hapless hero will be repeatedly manipulated into being in the right place at the wrong time, particularly by the ex and current old ladies in his life. 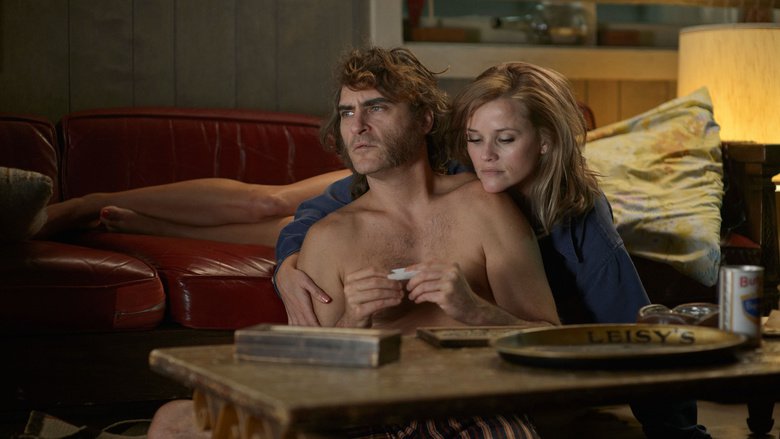 As the plot quickly expands and it becomes clear that the missing Mr. Wolfmann is only a fraction of a far greater conspiracy that encompasses heroin smuggling, a syndicate of dentists and a saxophone played turned government informant (Owen Wilson), Anderson—adapting Pynchon’s novel mostly faithfully—is clearly having fun overloading us with information. One of the movie’s many hilarious throwaway gags is Doc’s diagram of the story’s many players; our hero is as lost as we are. Some of the movie’s fans have insisted that the plot doesn’t matter, but it’s not that, exactly—it’s that, when by the time we meet the guy (or one of the guys) pulling the strings, it feels beside the point. The two obvious cinematic reference points for Inherent Vice are The Big Lebowski and Robert Altman’s hazy, meandering film of Raymond Chandler’s The Long Goodbye, and those are both unavoidably a part of the movie’s DNA. But I also found myself thinking about Chinatown, another Los Angeles mystery where the specifics of the central shadowy plot are less important than our hero’s realisation of everything that he’ll never know or be able to change. In Chinatown, this realisation transforms the noir into a horror story; here, it’s met with a dopey shrug that betrays more than a hint of sadness, mixed with the hope that, if our hero or any of us can save one little kid from the little kid blues, maybe all isn’t lost.

If Inherent Vice is lamenting the end of an era, it works as well as it does because it never underlines this point. The loss of an idealised memory of a perfect moment that maybe never existed is crystallised in the scenes between Doc and Shasta, seen in flashback in a perfect moment, scored to Neil Young’s “Journey Through the Past.” I can’t help feeling like I’m wasting a lot of words when film critic Miriam Bale has already written the perfect one-sentence review of the movie on Twitter, observing that “Sometimes I think Inherent Vice is only for those who have exes that seem like certain Neil Young albums.” Contrast that with a scene late in the film where Shasta uses her sexuality to manipulate Doc; Waterston is remarkably fearless in the scene, which is—sexy isn’t the right word, but it’s made doubly disturbing because it’s not entirely un-arousing for any male audience members of the audience who’d like to think of themselves as better than that. The scene casts a dark shadow over the rest of the movie, a lingering reminder that, whatever our attempts at living the hippie lifestyle then or now, our own animal attraction to power and control—whether we’d prefer to be on the giving or receiving end—thwarts us as much as the Golden Fang ever could.

It’s scenes like this that set Doc Sportello apart from Jeff Lebowski, as much as both are the men for their times and places. Whereas the Dude is a truly Zen creation pulled into a situation beyond his control, there’s a constant tension in Doc best illustrated by his favourite gesture, a peace sign followed by a middle finger. At one point, Doc casually jots down the phrase “Paranoia alert” in his notepad, and Phoenix’s performance is a masterpiece of muttered asides and little gestures, facial expressions and whimpers that suggest he’s always just barely keeping a full-blown panic attack at bay. He’s matched by Josh Brolin as Detective “Bigfoot” Bjornsen, a Jungian shadow of sorts for Doc—Brolin uses his rugged screen presence to great effect, suggesting a wounded and strangely empathetic soul underneath the macho bluster, and Bigfoot and Doc’s complicated relationship culminates in a scene that had me in hysterics both times I’ve seen the movie. The rest of the star-studded cast is terrific—I particularly enjoyed Martin Short, who does the most hilarious bump in film history; Michelle Sinclair (nee Belladonna), whose scene ends in a neat reversal of the same moment in the book; and Reese Witherspoon as Penny, an assistant D.A. and Doc’s sometime lady. Penny’s an upstanding citizen who sneaks away to Doc’s shack at the fictional Gordita Beach for occasional deviance, and frankly, her simultaneous giving Doc a hard time while clearly being totally into this weed-addled mess of anxiety and frayed synapses reminded me of me and my old lady. Perhaps it’s not a great sign of how I’m doing if I’m relating to Doc Sportello, even if Sortilege assures him he’s doing good¹; on the other hand, out of recent releases, better that I see myself in Doc than in Birdman or Listen Up Philip or, especially, those knuckleheads in Whiplash. 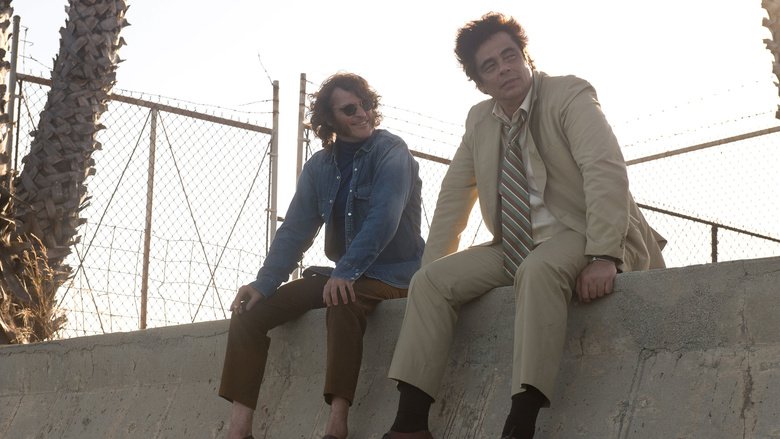 But I digress. The real star here is Paul Thomas Anderson, and while he’s content to translate much of Pynchon’s book faithfully to the screen, it’s still unmistakably his movie. Anderson has made enough movies now to chart an evolution from the look-at-me wunderkind who filled Boogie Nights and Magnolia with jaw-dropping tracking shots and bold gestures like, say, frogs falling from the sky. As a teen, my reaction to these moments was “Oh my God, this guy is fucking awesome and I want to be him when I grow up.” Now I’m older than Anderson was when he made those movies, and I can also see how desparate he was for validation, which actually only makes me love them (and him) more. If There Will Be Blood and The Master signalled that he was becoming a more “mature” filmmaker, then Inherent Vice is both a logical next step and a surprising left turn for the director. Anderson has cited the Zucker brothers as an influence, and during the second viewing I caught enough ingenious peripheral sight gags (How did I miss the machine gun-toting Jesuses the first time?) that I’m eager to discover more. At the same time, the few elaborate tracking shots or other big stylistic flourishes are very brief and precisely chosen—for the most part, Anderson favors letting scenes unfold in long master shots, and any camera movements are very carefully motivated, including some beautiful handheld camerawork (just when I thought I was sick to death of handheld).

Probably the most impressive thing about Anderson’s work here is his confidence in the material—this was never going to be a major crowd-pleaser, but it’s obviously work of a guy who is content to follow the stories that interest him. It’s a movie for anyone tuned into its own peculiar wavelength, the straight world be damned. While it would have been nice if, somehow, the movie became a hit, it really never stood a chance, and that’s okay. I drove an hour to see Inherent Vice the first time, to a college town I’d never been to; on the way home, driving through the beautiful northern reaches of my state, the movie still buzzing around in my head, I felt alive in a way no new movie had made me feel in quite a while. It feels inevitable that Inherent Vice is on its way to becoming a cult classic—not on the order of The Big Lebowski, perhaps, as it doesn’t lend itself as easily to costume contests and bowling tournaments, but I look forward to the movie gradually finding its audience. In the meantime, I’m as content to love it for my own reasons as Anderson clearly was in making it for his.

¹ I wasn’t familiar with Joanna Newsom before the movie, but now, I’d gladly listen to her narrate anything. She could turn an industrial training video into a lullaby.