Jessie Buckley steals Wild Rose with a star-making turn as Rose-Lynn, a brazen Glaswegian singer released from prison after serving a year for throwing a bag of heroin over the fence of a neighbouring jail. The 23-year-old is given back her leather jacket, cowboy boots, and a parole curfew that comes with a matching ankle tag. Audiences are fooled into thinking she’s a wild young woman as she stops to have alfresco sex with her boyfriend Elliot (James Harkness). It’s only when she arrives on Glasgow’s working-class south side do we meet her young children…

Audiences are so accustomed to seeing terrible women be good mothers, as their maternal instinct remains strong, but Rose-Lynn shows very little care towards her kids. Practically a child herself when she had her brood, Rose-Lynn is boozy, selfish, and indifferent towards them. Wild Rose doesn’t hide the fact her offspring are just another impediment on the road to fame and fortune in Nashville. We’ve seen so many starlets dreaming of making it in the music biz (A Star is Born, Begin Again, Beyond the Lights) but very rarely do we see them having such physical baggage.

With her strict curfew and ankle tag, Rose-Lynn can’t get her singing job back at Glasgow’s Grand Ole Opry—a country-themed working man’s club full of line dancing old ladies. She instead gets a job as a housekeeper for a middle class, bohemian family led by Susannah (Sophie Okonedo). And when Susannah overhears Rose-Lynn’s soulful singing voice she resolves to help make her dreams of becoming a country singer in the US come true. So begins a crowdfunding campaign and a birthday booking to sing… but while you think you know where the story’s going… it’s probably not going to be the uplifting jaunt you want. Not when Rose-Lynn is so keen on hurting everyone around her. 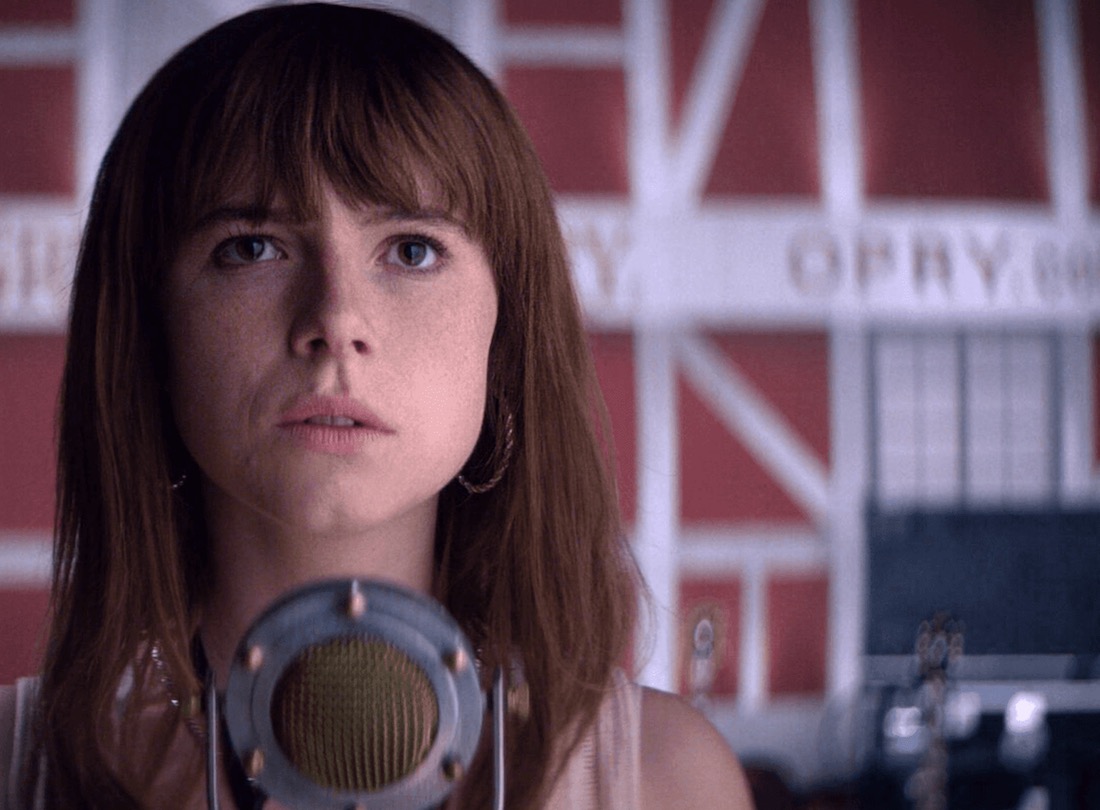 The cross-class relationship between Rose and Susannah is a refreshing break from the middle-class villains often seen in British films, where the working-class are usually the heroes. Okonedo doesn’t know about Rose-Lynn’s kids and is vicariously living her youth through the singer’s obvious talent. There’s a real sorrow to Okonedo’s performance, too; a longing to not live in a big house and have an important job, plus her dignity to maintain, but she still has hopes and dreams of having something to look forward to in life. There’s a close bond between these two women that’s non-sexual and non-threatening, so Wild Rose comfortably passes the Bechdel test.

Director Tom Harper (The Woman in Black: Angel of Death) and screenwriter Nicole Taylor (TV’s The C Word) lure you into thinking you’ve seen this story before. From the start, it seems we’re watching a modern fairy tale because it’s so cheeky and inspirational, but it ends with the pain of life happening whilst you’re out there fighting for your dreams. When Rose-Lynn declares she loves country music because it’s “three chords and a truth”, it’s easy to predict the level the film’s going to operate at, but Nicole Taylor’s script has other plans…

By the third act, Wild Rose indulges in the romanticism of homegrown films and then it does something you don’t expect. It drifts away from fantasy and into hard reality. It relies on the audience having had a dream they couldn’t quite reach because of the hardships of life.

There’s nothing revolutionary about this narrative—from Kinky Boots (2005) to Billy Elliott (2000), Brits do the ‘follow-your-dream and never lose yourself’ story particularly well. Much like those previous hits, the gritty social commentary stops audiences getting too comfortable with overfamiliar plot devices. 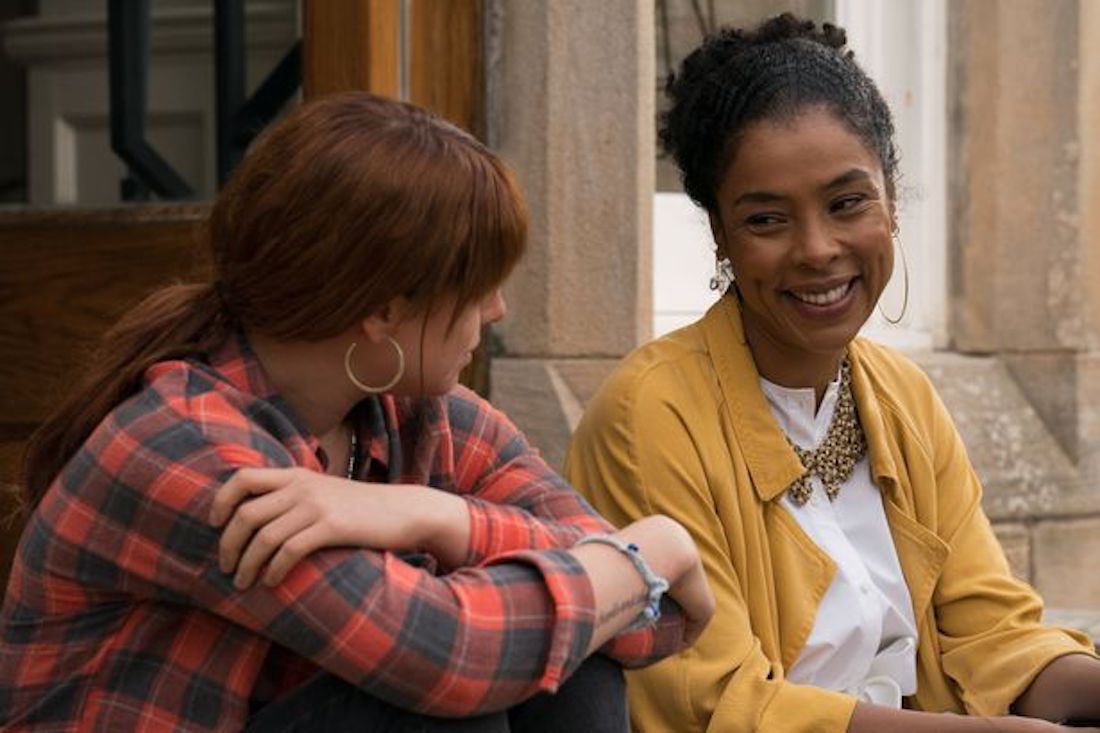 The real story of glory and fame is not the one on screen but is that of its lead, the Irish-born Jessie Buckley. She rose to brief fame as a runner-up on search-for-a-star reality show I’d Do Anything, where Andrew Lloyd Webber was casting Nancy for his new version of Oliver! Having failed to win that BBC contest, Buckley went back to drama school and landed a part in Tom Harper’s TV adaptation of War & Peace (2016).  For all her unreliability and self-destructive tendencies, Rose-Lynn has infectious goodwill due to Buckley’s magnetism. From the moment she skips out of prison in her cowboy boots, your eyes don’t want to leave her, even when acting against acting heavyweights like Julie Walters and Okonedo.

Buckley’s performance would be diminished without the contrast of the mother-daughter story, that sits at the real heart of Wild Rose. Julie Walters is spectacular as Marion, her conflict with Rose always out of love. This quiet performance brings a kitchen-sink realism to a sometimes fantastical musical narrative.

Thematically the story’s an old-fashioned trip about self-discovery, both musically and morally. Wild Rose has a deep respect for country music, with some fantastic cameos and a wonderful soundtrack by Jack Arnold (War & Peace). Wild Rose is as much about a place and cultural identity as it is about making music and hitting the showbiz jackpot.

Wild Rose isn’t a dazzlingly original movie, but it lands a strong emotional impact. It has a big heart and an unashamed optimism about hopes and dreams. No matter how cliché and predictable it all sounds strong performance by Okonedo, Walters, and Buckley hold it together with a commanding authenticity.