Netflix’s eight-part supernatural drama has more homages than original thoughts. A melange of inspirations from 1980s sci-fi, horror, and fantasy, Stranger Things is also pockmarked with retro touchstones like BMX bikes, Dungeons & Dragons, and brick-sized walkie-talkies. Even the show’s poster is indebted to artist Drew Struzan, with a font used on the cover of Stephen King’s Needless Things. (Yeah, I noticed that.) There’s almost no creative decision that isn’t informed by a love for ’80s nerd culture—a time when being interested in geeky things courted ridicule in the school playground.

Created by The Duffer Brothers, Matt and Ross (born 1984, hmmm), Stranger Things is that big fat cliche of criticism: a love letter. The fact almost nothing about it feels original is almost beside the point, although I’m concerned that tomorrow’s filmmakers will be creating homages to homages. What matters is The Duffer Brothers get it. The atmosphere, the characterisations, the pacing, the style, the atmosphere, the music, the casting, everything is applied with a masterful touch and reverence for the material it borrows. Stranger Things is, effectively, a miniseries from 1983 with a modernist approach and visual sparkle. A Spielbergian fantasy adventure with the hidden grit of John Carpenter. 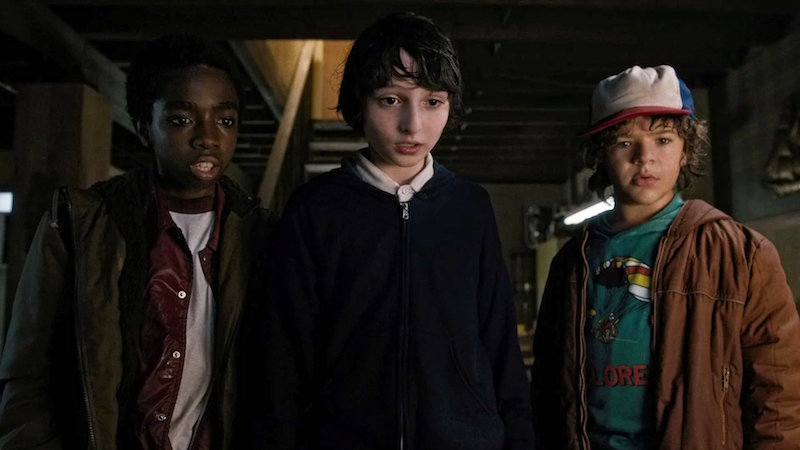 Maybe I am a mess. Maybe I’m crazy. Maybe I’m out of my mind! But, God help me, I will keep these lights up until the day I die if I think there’s a chance that Will’s still out there!

That’s the setup, and most kids of the ’80s will correctly guess where it’s headed. If Stranger Things has a flaw it’s how strict adherence to convention leads to predictability. It’s happy being a warm bath of nostalgia, telling a new but familiar tale. And while that approach has its downsides, the positives manage to outweigh the negatives. A television series with so many memorable moments deserves credit, and after awhile it’s easy to forget that Stranger Things isn’t a challenging watch. 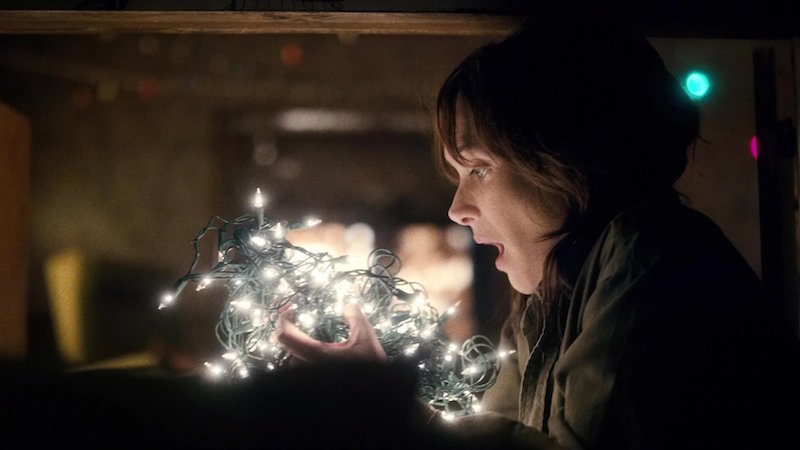 This thing that took your son… we don’t really understand it… but its behaviour is predictable. Like all animals, it eats.

The standout moments are character based (Ryder commits with a wide-eyed, febrile passion), or during the few instances when the show gets unexpectedly gruesome or creative with its mythos. My favourite example being the sequence where Joyce communicates with her missing son using decorative Christmas lights, which she strings up around their home to use as a makeshift Ouija board with a wall covered in a painted alphabet.

The show’s greatest strength is with the spot-on casting. It’s difficult to find one child actor who behaves naturally on camera, but somehow they found five—led by Finn Wolfhard as the group’s replacement leader after Will goes missing, who forms a close bond with taciturn Eleven. Millie Bobby Brown, also the standout of BBC America’s otherwise frustrating Intruders, gives a remarkable performance as the androgynous Eleven (nicknamed Elle). She’s the friendly freak the kids keep in their basement, delighted by her ability to move things with her mind, yet increasingly fearful of the power she wields and frightening mysteries she presents. Brown’s the star of the show; a young actress blessed with talent beyond her age, who shows her character’s tenderness and naivety but in a flash can become a hardened Carrie-style threat. Several of the show’s most fist-pumping moments involve Brown snapping bad guy’s bones with a jerk of her head. 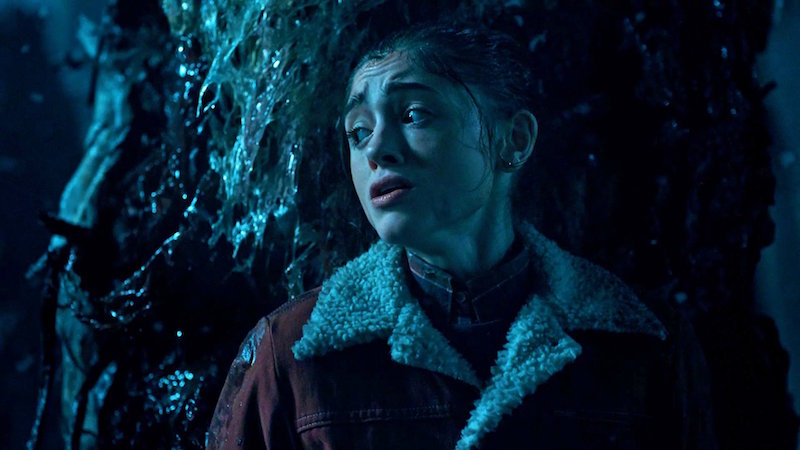 Science is neat, but I’m afraid it’s not very forgiving.

Interestingly, Stranger Things contains three layers to its tale, covering different age groups. Will and his young friends embark on a Goonies-style adventure with Stand by Me overtones, speeding around on BMX’s trying to find a creature they nickname the Demogorgon using a compass. It’s lighthearted to a point, with the gang treating everything like a real-life D&D campaign, but given weight from the viewer’s perspective because of how serious the other subplots become…

Will’s older brother Jonathan (Charlie Heaton) is the focus of the teenage adventure, meaning added grit and more complicated social dynamics. Jonathan’s a loner shunned by his peers, but over the course of the season falls in love with pragmatic Nancy Wheeler (an impressive Natalia Dyer), Finn’s older sister. Eventually becoming a pair of self-styled ‘monster hunters’ after visiting a hardware store to purchase a man-trap and lighter fluid, they tackle the same Demogorgon problem from an edgier teen-horror perspective. This involves getting sucked into another dimension, the ‘Upside Down’, and fighting the beast from inside a booby-trapped house. 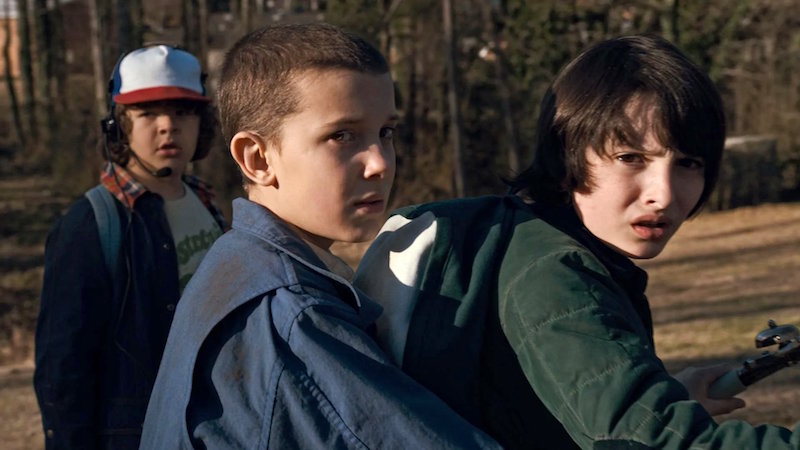 Our friend has superpowers, and she squeezed your tiny bladder with her mind.

And finally, there’s the adult angle to consider, seen primarily through the eyes of frazzled Joyce and dependable Chief Hopper, who starts the show as a paranormal skeptic until they both realise the truth, and how Will’s disappearance is linked to a government conspiracy involving a local laboratory and Dr. Martin Brenner (Matthew Modine, hair seemingly modelled on David Cronenberg).

This three-pronged approach to the story is a great idea. It results in a trio of subplots that pull in the same direction, but from different angles, so nothing feels like a waste of time or a distraction from the core story. It also echoes how the key stages of our child-to-adult development tend to feel segregated. It’s just a shame the individual layers of the story don’t braid together very tightly. I initially enjoyed how separate they were, but things come together quite belatedly, and then not as convincingly as I was hoping. Not to spoil things too much, but keeping a few doors wide open for another season also felt like a mistake. This story just about covers eight hours, wisely truncated from the Netflix-standard ten or thirteen, so finding a way to keep the tale going seems like a tall order. There are ways to do it, of course, but do we really need to see it? I’d rather Stranger Things has been designed as an anthology series, using the same actors and perhaps keeping the 1980s setting, but we’ll see how the Duffers Brothers fare with the inevitable follow-up…