Two strangers, who awaken in a room with no recollection of how they got there, soon discover they're pawns in a deadly game perpetrated by a notorious serial killer.

Horror is a popular genre for independent filmmakers looking to break into the industry, partly because it’s relatively cheap to produce and thus turn a sizeable profit. In James Wan’s Saw, the setup is two men chained up in a bathroom, and it launched an iconic horror franchise that’s grossed $976M.

I still remember everyone talking about a new horror movie where a man had to saw his own foot off to escape. Even more distinctive, the poster corroborating the anecdote: a man’s foot and a bloody hacksaw. I didn’t need to hear about characters or backstory, it presented an image that had to be seen to be believed. 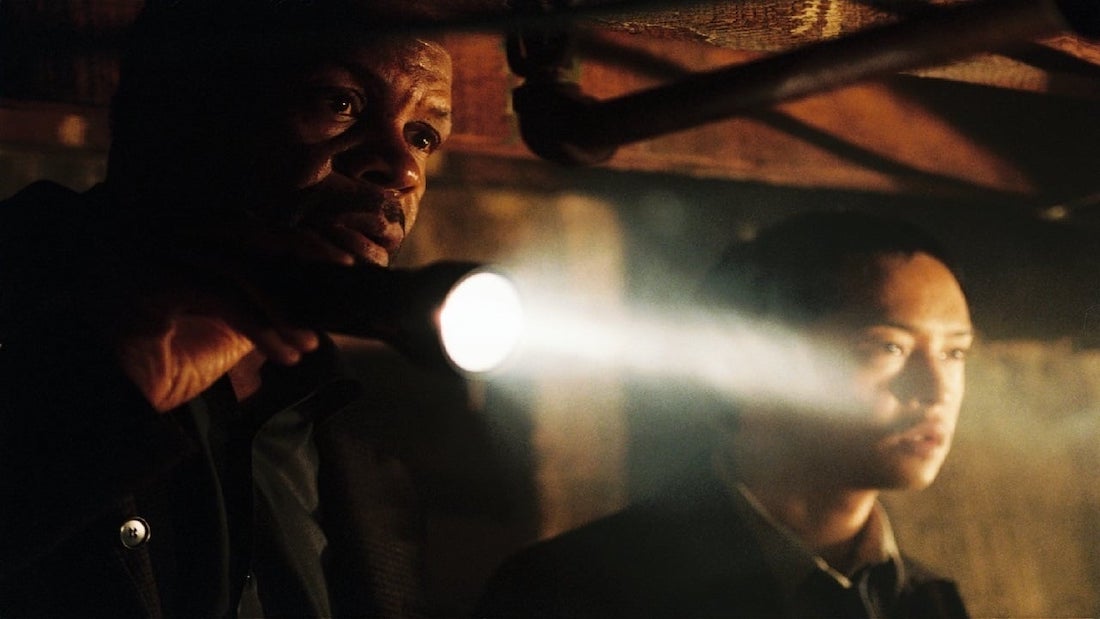 The simplicity of Saw got lost as the franchise concocted increasingly elaborate traps, yet the act of sawing through your own flesh isn’t what captivated audiences. As its contraptions grew more complex the danger became more immediate, as we barely had time to know the people being tortured let alone imagine ourselves in their situation. This is the key to success that Wan and writer Leigh Whannell delivered in Saw; if you don’t do what the deranged Jigsaw (Tobin Bell) tells you to do then nothing happens. You’re just left to die.

When Gordon (Cary Elwes) and Adam (co-writer Whannell) wake up chained to opposite sides of a dingy bathroom there’s no sign of deadly machinery or an ominous doll on a tricycle, just each other and the mystery of what’s happening and why them. Returning to this original scenario 15 years later, it’s easy to see how influential Saw was. After learning they have a time limit to discover the clues to their salvation it’s evident where the cultural escape room craze started. 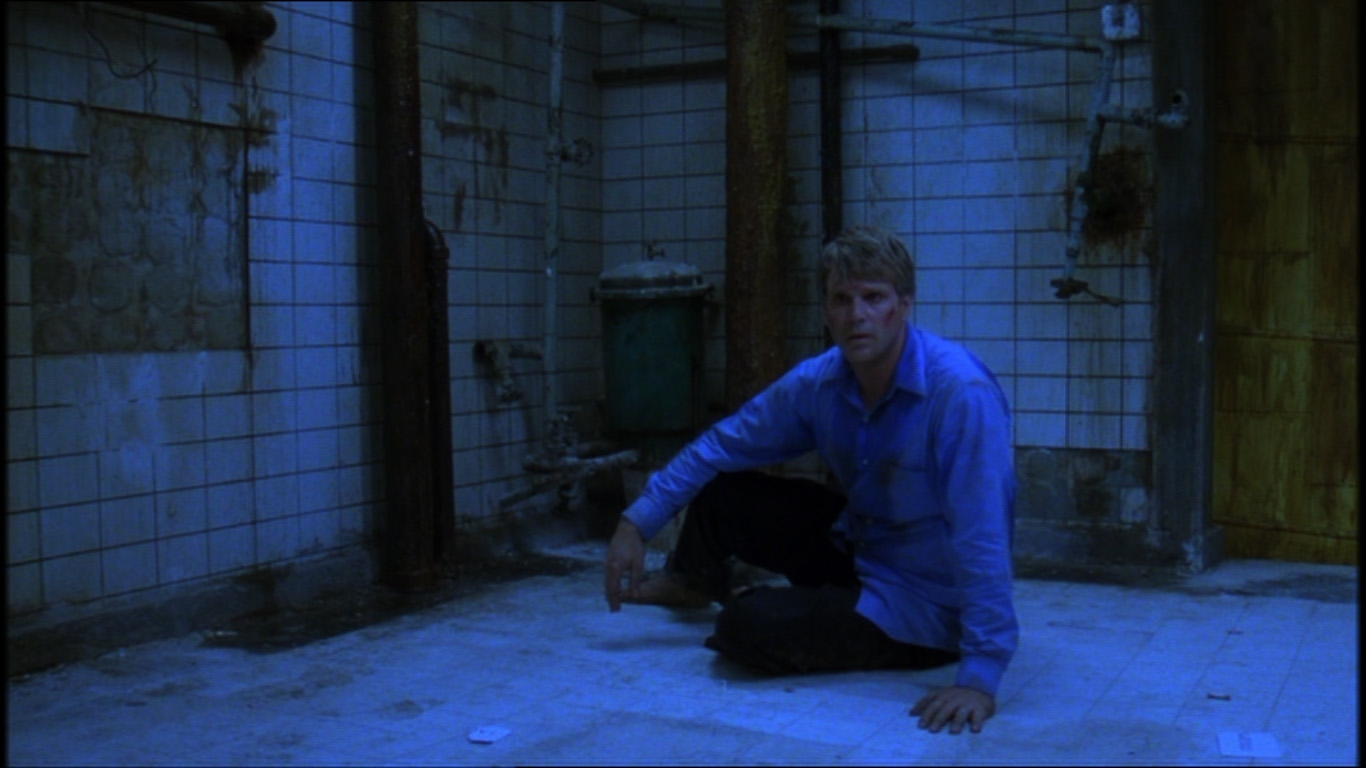 The film also wears its own influences on its sleeve. Adam recalls the urban legend of waking up in a bathtub with your kidneys stolen, as Gordon assures him he’d be dead without them. Other social stories are practised, like the classic trolley problem; Gordon learns his wife and child are in danger and he’s given a bullet and a gun to save them. Where he’s standing though the only person he can shoot is poor, defenceless Adam. Looking past the gore and torture, the roots of Saw lie with a simple choice: kill one person to save others. 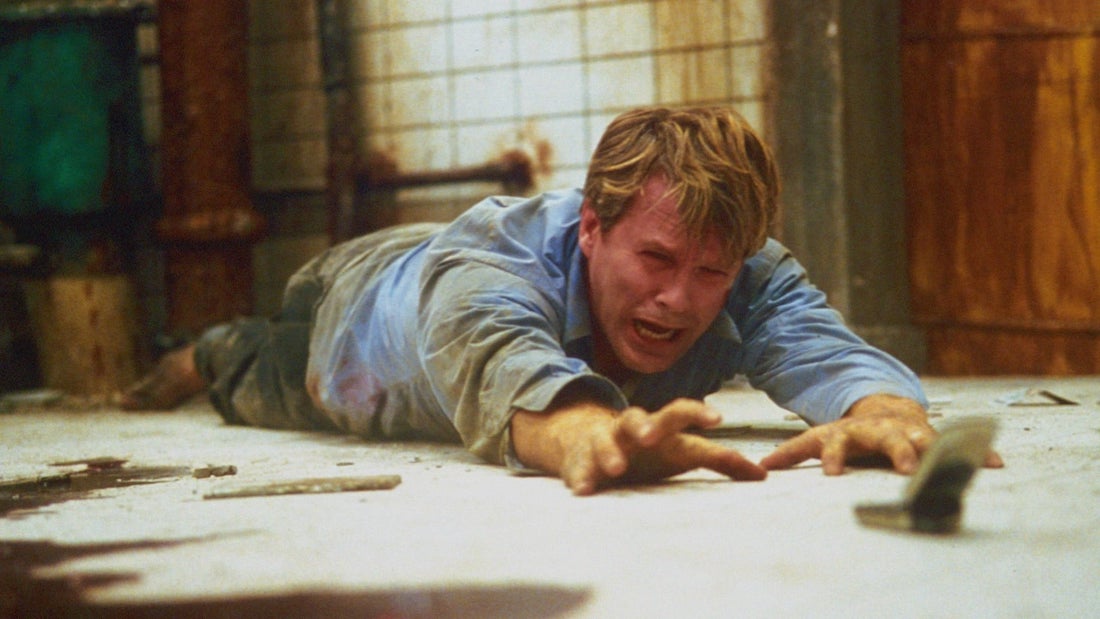 One major setback that inferior copies of this formula have, aside from worse writing, is trying too hard to emulate the situational horror. While the main story is two people trapped, Wan and Whannell craft a confidently layered narrative expanding the story outside of their four walls. An exploration in spatial and non-linear storytelling the saga would be equal measures praised and criticised for. Gordon recounts his past ‘experiences’ with the Jigsaw killer as he was once the police’s prime suspect. Not only does he tell his own story of the investigation but also being subjected to the only surviving victim’s story of survival. A compelling enough sequence that distracts from the fact that Gordon and Adam spend most of the film simply sitting there talking.

This backstory does a great job at showcasing the psychological games as Gordon is forced to admit his adultery as an alibi. It also introduces the more spontaneous and overly mechanical horror with Amanda’s (Shawnee Smith) horror scenario: the classic “reverse bear trap”. Succeeding in suggesting a horrific death without showing it, later films would give in to temptation and show audiences all the gruesome outcomes.

Another simple trap is a man forced to wade through a maze of barbed wire before a doorway seals him away to rot. Wan shows glimpses of the action through stylistic speed ramping and frenetic cutting (setting the tone for all future films) while police dialogue delivers the morbid details that “he was cut so deep we found traces of stomach acid on the floor”. 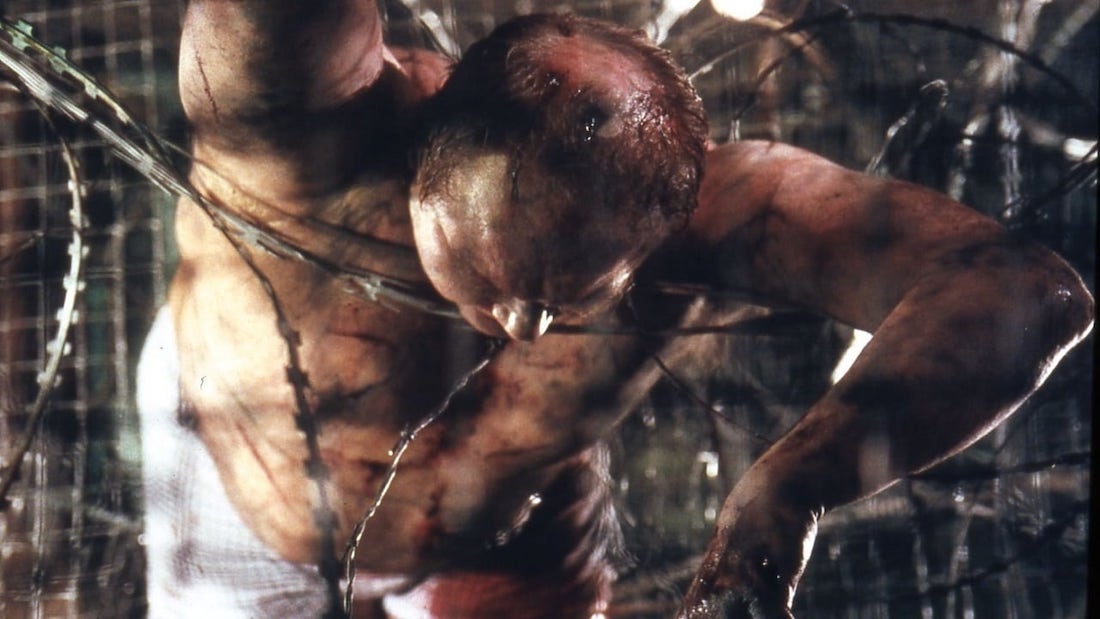 This Rashomon-style storytelling isn’t entirely engrossing. We continue to follow the police who are close behind in figuring out the mystery in a weak cribbing of Se7en (1995). Detective Tapp’s (Danny Glover) unhinged manhunt of Jigsaw is a rather dull trope in an exciting new narrative and only serves to reveal more information that Gordon or Adam don’t know. And that’s another issue, as Amanda’s story is wrapped cleverly into Gordon’s, whereas the adventures of Tapp and his partner feel far too removed from the core plot.

Everything comes to a taut and chaotic finale as Tapp closes in on the man who has Gordon’s family—the one ready to kill them if Gordon fails—and the two desperate men still chained seeing that their time is up. With 20-minutes left, what works best in Saw is when everything doesn’t go to plan. After promising a severed foot, the act still carries the unexpected twist as Gordon believes he’s hearing his family’s death cries over the phone and does the deed in senseless hopes of appeasing the killer. The real horror for the audience is that Gordon doesn’t know his family is fighting back and escaping. 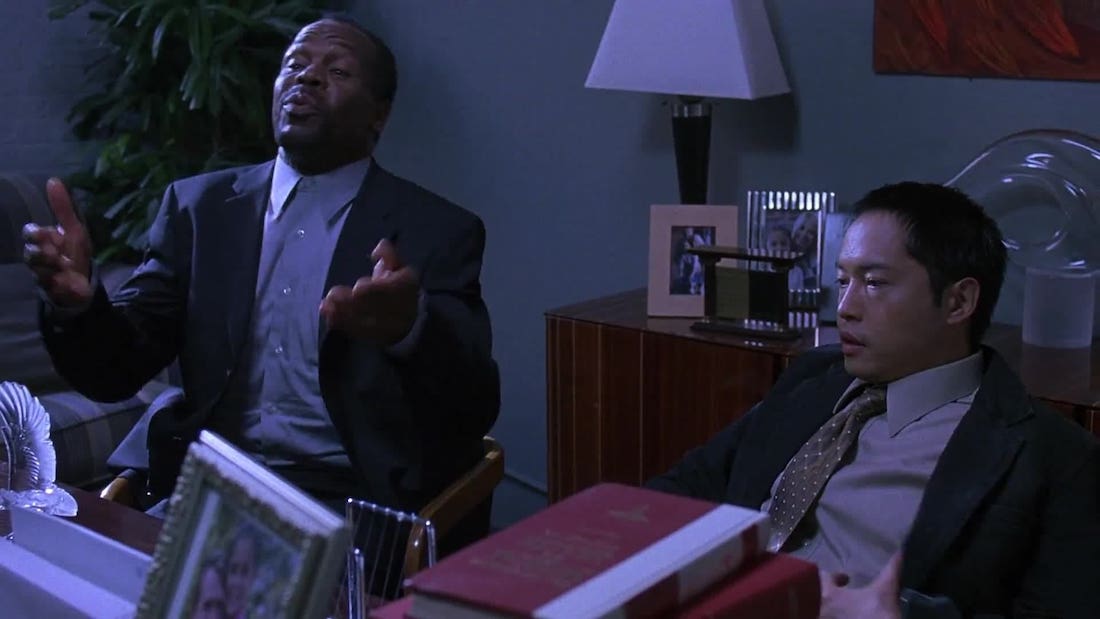 Senseless is the pivotal word for the conclusion that every sequel would try to top and fail; all taking the now-iconic “game over” kiss-off as Jigsaw’s Machiavellian schemes come to fruition. The other memorable line they took to too liberally is “technically speaking, he’s not really a murderer”. Jigsaw definitely kills multiple people. Watching Saw again I almost wonder if that was the intention; the jaw-dropping spectacle of the ending is how everything goes so terribly wrong. If Jigsaw is meant to instil lessons in morality then who learns anything by the end? Poor Adam, who never gets a choice in anything? The man who’s forced to kill people to keep Jigsaw’s hands clean? And what about Gordon, who cheated on his wife so now he has to murder someone to make up for it?

Saw remains an impressive standout in 21st-century horror and did spawn an entertaining, if increasingly silly, soap opera of a franchise. What makes the climax so exhilarating, sadly, became the main problem for all of the sequels. The entirety of the soon to be nine-film saga is rooted in the infallible gospel of Jigsaw when the very first chapter highlights how his preaching is hypocritical. 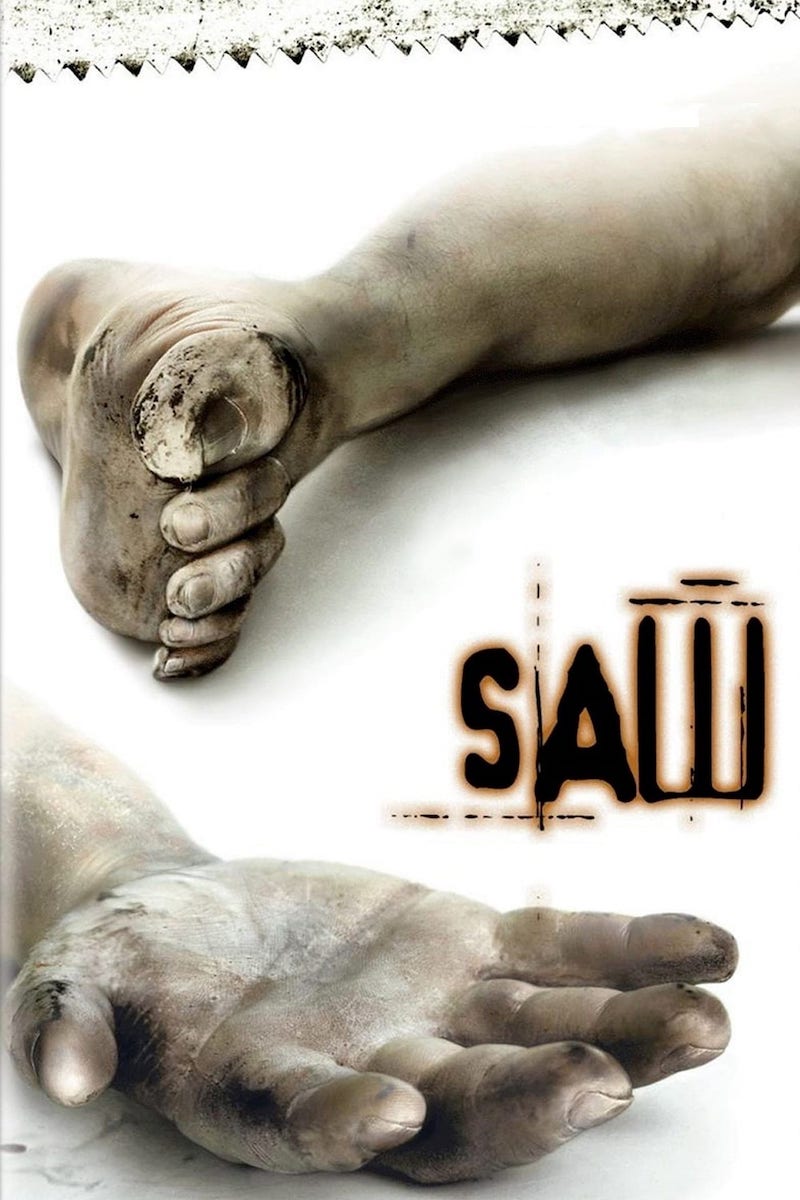 Written By
Devon Elson
More from Devon Elson
A series of six short horror stories anchored by a woman who...
Read More